Even though none of us have even been there, we really seem to love Australia here at Jenk HQ. We’ve done collabs with DJ/musician Mall Grab, showcased the Pass~Port offices/flagship store, and premiered Rowan Davis’ “Meadow” part roughly all in the last year. But the latest bit of Aussie goodness to hit our inboxes was this solo part from Noah Fuzi.

Noah is what some of y’all would typically call an “ATV,” since he’s comfortable throwing down big transition tricks just as much as he is doing tricks at crusty street spots, and can take a slam like a champ. He’s also a low-key contest skater and a bit of an actor, so that told us there’s a bit more than meets the eye when it comes to this guy. Guess not all Australians are all about shotgunning beers and peeing into their own mouths.

We hit up Noah via email to get a little backstory on putting this video together, so read on to find out more about skating’s most concussed Australian.

What do you have to say to people who say park footage doesn’t belong in a part?
I just think if it’s a DIY or some crusty park, why not? Some of my favorite footage to watch is in Tent City with all the Anti-hero guys skating Australian parks. I personally just love watching someone skate everything. Like Cardiel grinding a massive rail and then doing a huge tweaked out backside air. Doesn’t get much better than that.

You get a good beating in this part, who are your favorite skaters to watch slam?
I’d probably have to go with Pedro Delfino, Bob Burnqiust, Cardiel, Sluggo and Jhett Brewer. If you’ve never heard of that last name, search up and watch Psycho Jhett in Dr. Scarecrow, it’s so brutal. 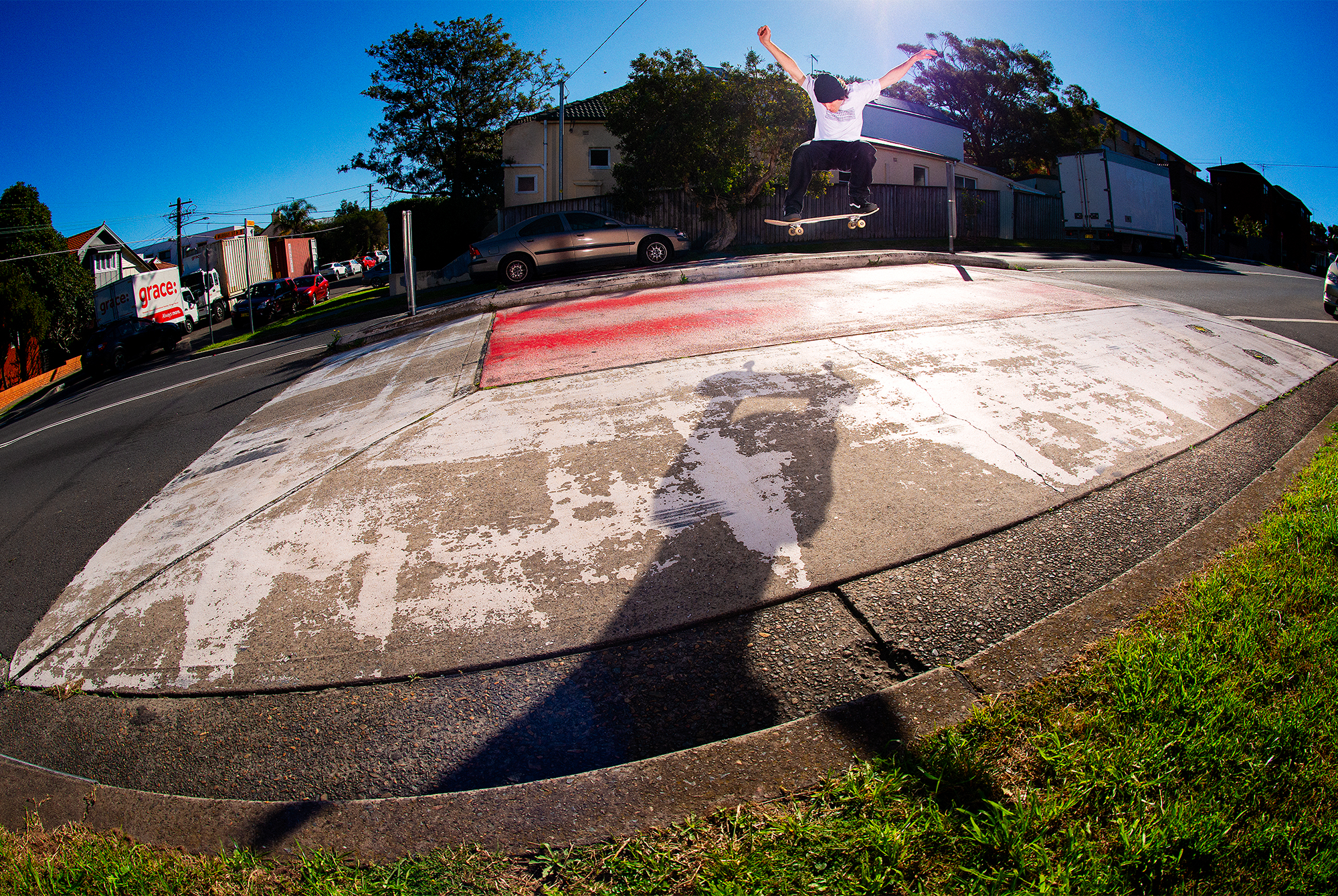 How hard did you hit your head on that ollie over into the bank in this part? Did you get a concussion?
I hit my head pretty hard, that spot is a nightmare.

A little back story here, the bank is outside of a big church, so as soon as we started setting up the security were already there to kick us out. That day we were playing cat and mouse with the security and after the second time around I told myself if I get an opportunity, I’m taking this thing to the bottom. I probably took like six bad slams, and then on the last one, I hit my head.

I still kept trying after that and only stopped once the priest came to kick us out. As he was giving me a lecture, I started to notice I was pretty dazed, and in hindsight, I was obviously concussed. By the time we got back to Joel’s, it all hit me and I felt fucked.

Typically, a slam will be followed by a make of the same trick, but you didn’t do that in your edit. Do you think that the slam can sometimes be as sick as the land?
We never got that one, but the slams were too good to leave out. Joel and I thought people had to see at least one [laughs]. I rolled my ankle pretty bad two weeks ago trying to finish this video, so we didn’t get to go back. I guess life never goes how you want it, so a slam will have to do.

You’ve gotten to travel the world for contests like Vans Park Series. Which country would you say was the best to party in?
One of the best parties was probably in Paris. Vans were premiering their “Take It Back” video and they rented out a sick spot right on the canal. Karl and I got into a Lime scooter accident on the way home that night, it was pretty funny. In retrospect I’m so thankful to have traveled so much with the whole Vans crew back then, it was such a good time.

A few skaters we’ve interviewed have said that one of the only reasons they did contests was the payouts, are there any other redeeming qualities to the contests?
That’s definitely a nice quality about them, not that I ever saw much money [laughs]. I used to enjoy all the lead-up sessions, it was always so sick to skate with Pedro [Barros], Bob Burnquist, and all those legends when they came to town. Sometimes it was fun to compete but most of the time I was just stressed out with the pressure I put on myself.

What’s the most amount of money you won and what did you spend it on?
When I was 19 and backpacking around Europe I won something like 1500 euros in cash at a Bowl contest in La Kantera. I took my friends to an expensive all you can eat dinner and then spent the rest of the money travelling until it ran out. 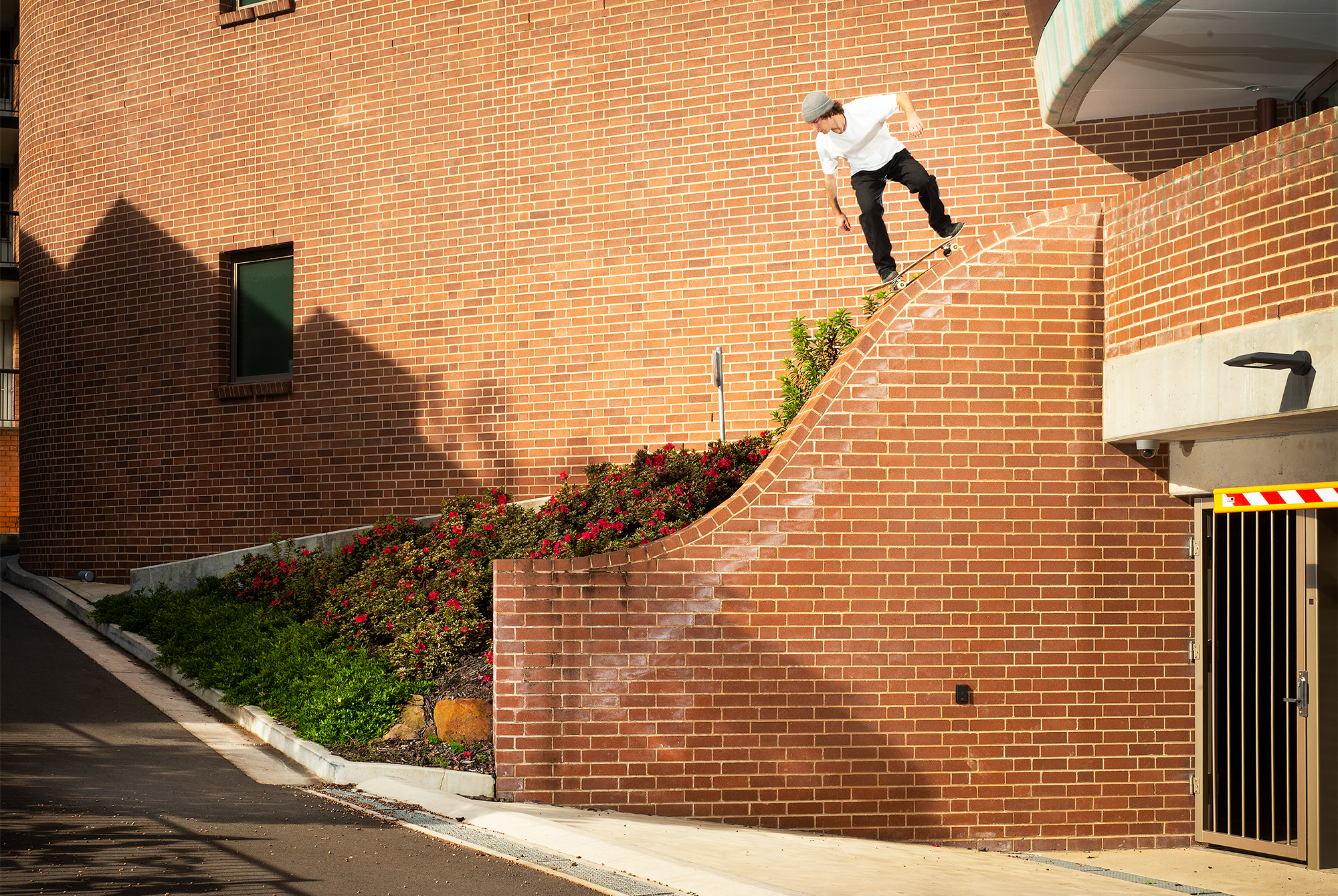 If you weren’t skating, what would you be doing with your life?
That’s a great question, which I don’t really know the answer to.

Do you have any side gigs outside of skating?
I work at a digital media agency called Y0KKE. I get to work with all kinds of companies, events, and athletes. I also recently finished studying a graphic design course, so looking forward to putting those skills to good use.

You’ve gotten the chance to act in a few movies, too. What was that experience like?
Yeah, it was really fun actually, and something I never planned for. It would be fun to get some more roles but going full Hollywood seems pretty hectic.

Would you be willing to pick up a pill or coke problem as a trade to make it big in Hollywood?
Hahaha no way, I meant going full Hollywood would be pretty hectic in a bad way.

Before the pandemic you were doing a lot of traveling; New York, California, Paris, etc… Do you think you’ll ever move out of Australia?
I think if you asked me this question pre-COVID, it might have been different but now I’m so happy here in Australia, I don’t think I’ll ever move.

Why do Australians love Vegemite so much?
No idea, I actually think it’s gross.