BUILDING SKATEPARKS IN IRAQ, INDIA, BOLIVIA AND BEYOND 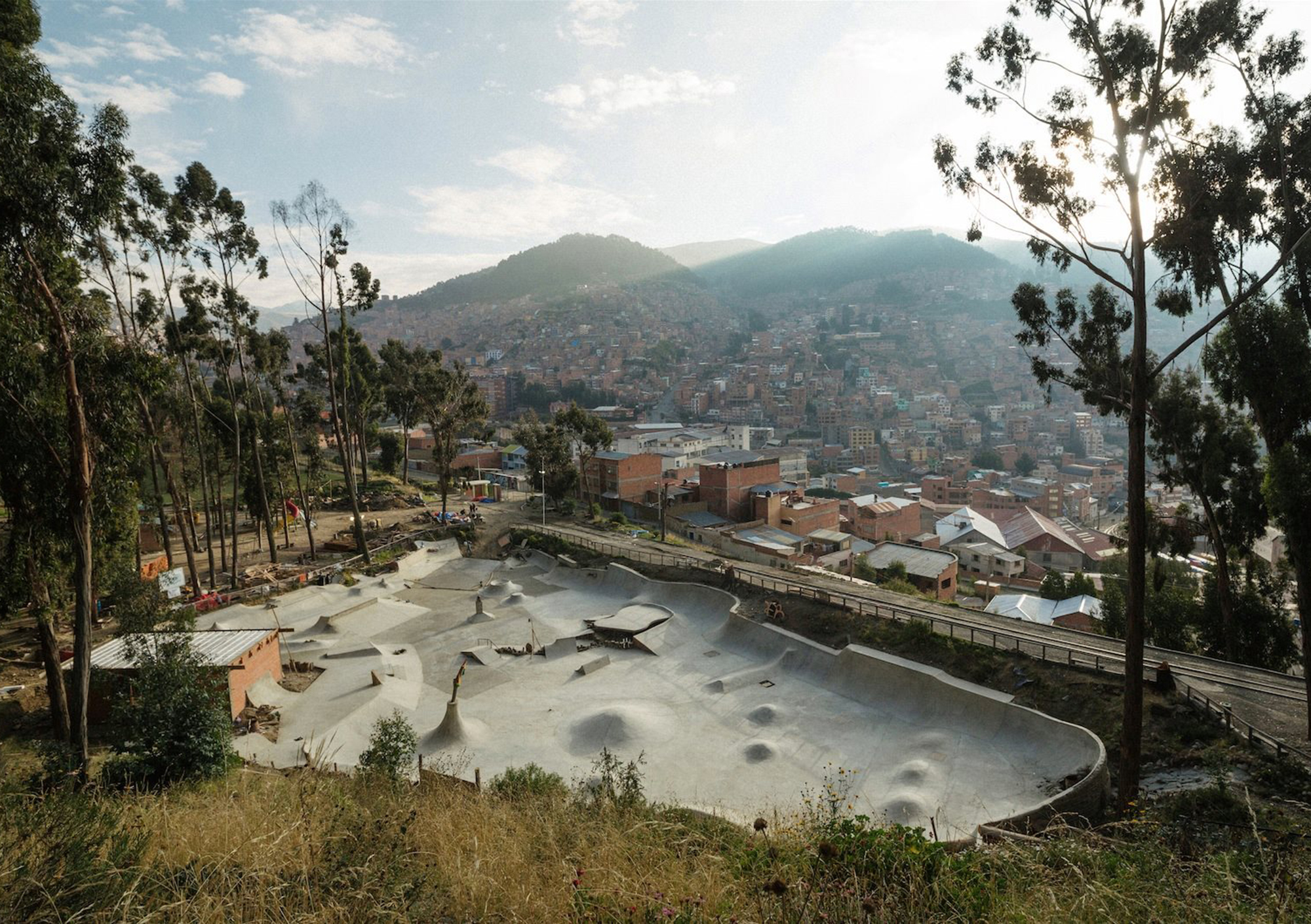 It’s an understatement to say that in the United States we’re spoiled little skaters. It’s almost hard for us to believe that there are entire countries without a single skatepark, DIY or beat up quarterpipe.

Since 2013 Make Life Skate Life has been changing that. The non-profit started by building India’s first public skatepark and has since built parks in underserved areas such as Jordan, Ethiopia, Nepal and even Iraq.

Arne Hillerns, the mastermind behind the projects, seeks out funding and sponsors, gathers volunteer DIY builders from across the globe, sources materials in foreign countries, all to build proper bowls and skateparks in places that otherwise wouldn’t have anything to skate there.

To find more about building in places with little to no skate infrastructure, we asked Arne and some of his comrades Shane Carrick, and Jerry Mraz to share some of the more hairy situations they’ve gotten themselves into while breaking ground in new territories and introducing skating to the masses.

If you’d like to donate to Make Life Skate Life and help them continue their worldwide builds click here. 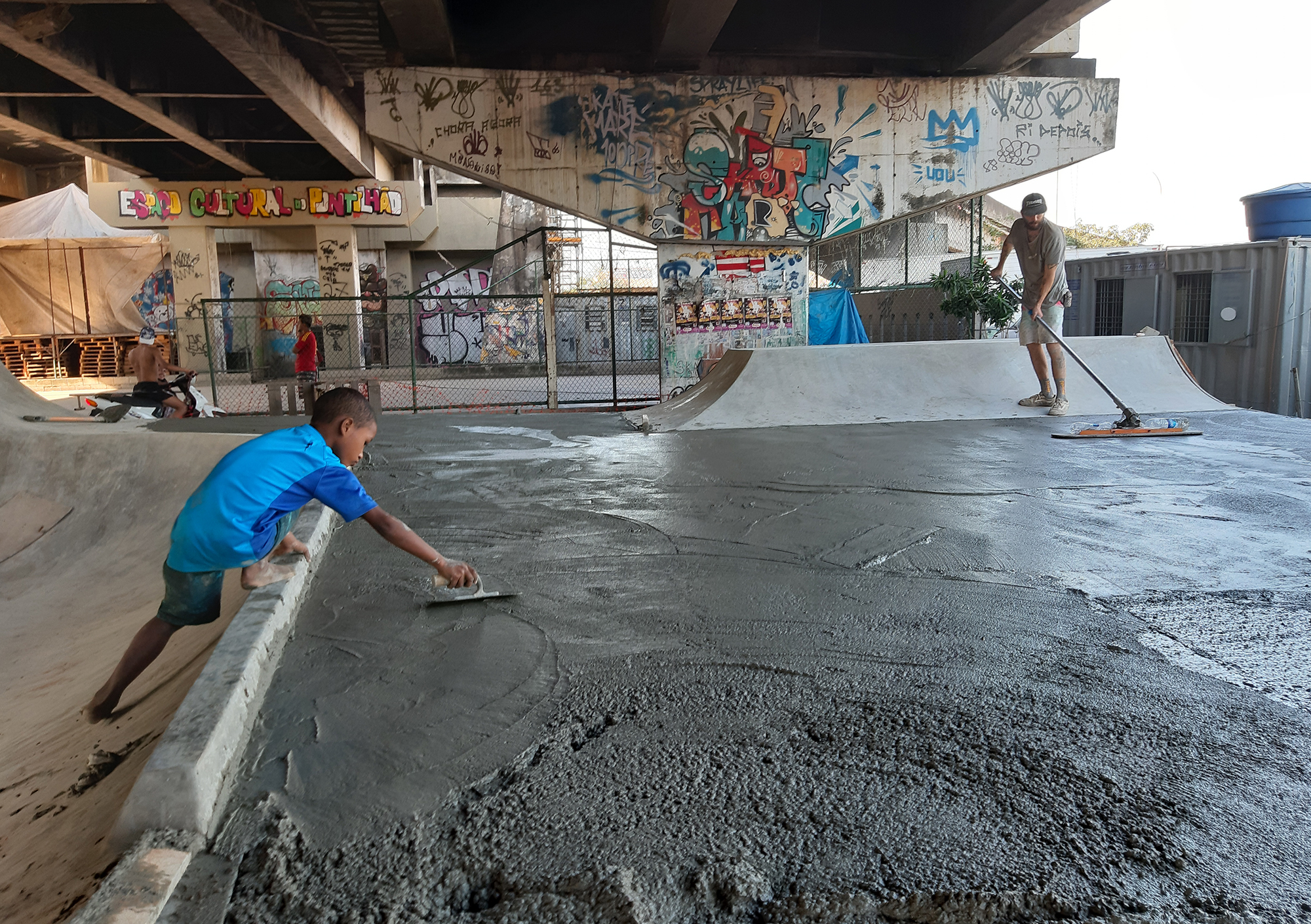 “Skateboarding is already popular and developed in Brazil but our build took place in a favela. There were already some people teaching skateboarding there but they don’t really have access to the outside world. They are kinda stuck in their favela world. It was really the sketchiest place I’ve ever been to. I was so surprised how many machine guns you see and how much everything is controlled by the mafia there. They have their own laws, like the wild west.”

There’s a kid, sometimes only 15 or so, with a walkie talkie and a machine gun on just about every corner inside the favela we were in. Then when you get closer to the open-air drug market, at the gazebo in the roundabout, there are many more of them. They’re guarding the area and when the police come in they start shooting. No questions.

One night a small group of us was walking back from dinner and a few of the mafia henchkids came up and started barking orders at us. I don’t think we had any Portuguese or Spanish speakers in our little bunch so it was weird. They were pointing their guns at us and wanting to go through our bags.

Nothing came of it. It seemed to me like it was more of a song and a dance. They wanted to feel tough and respected. We just wanted to digest.” 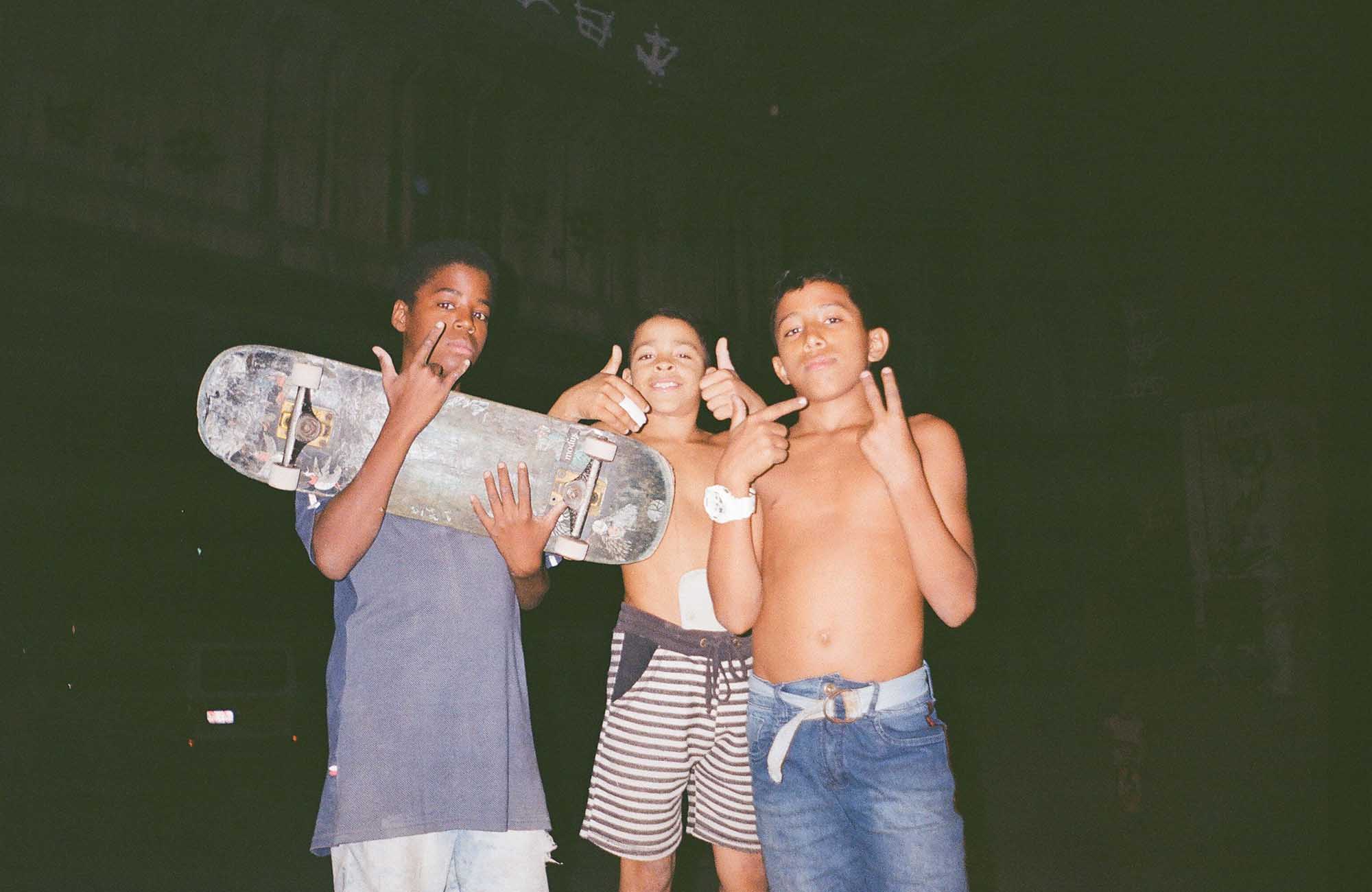 “Americans should consider that what they know about Iraq is most likely wrong. Iraq is a vibrant, rich, and safe place. The people are warm, the food is amazing, and now there is a skatepark. There’s no reason not to go. Another thing to think about is that Kurdistan is not really considered Iraq, and Americans visiting Kurdistan should do their best to learn the history of the region and of the Kurdish people. Skateboarders always seem to connect on a personal level regardless of what their passports say but some skaters are also just idiots who really need to put in some effort to be aware of where they are.

Making new friends from different places is the best way to become aware of one’s own blind spots and xenophobic tendencies. That’s what I’d like to emphasize – our skateparks provide a common ground for people to come together from different backgrounds and become friends. That’s what’s important – not just the physical act of skateboarding.

There’s a really cool group of skateboarders there who are super passionate and work really hard. Shout out to Dyar, Hastyar, Mohammad, Laly, Fatima, and all of the other Suli Skatepark regulars! Those wonderful people are led by Safin Muhammed, who is the devoted skatepark manager and overall awesome human being.”

“Arne, pronounced Arn nuh, is the man. He speaks like five languages fluently. He’s the mastermind. He’s really good at disarming angry people with kindness and respect. Never met anyone like him. The logistics that he’s figured out on every one of these builds would have been a brain-bending nightmare if I had to do them. And it takes a lot of balls. Hell of a guy, that guy.

It seemed like the shocker was in Suli, in Kurdish Iraq. It was wild how many kids who didn’t skate at all took to it right away. Apparently, the park has been getting a ton of use well after the initial buzz of having a new space wore off.” 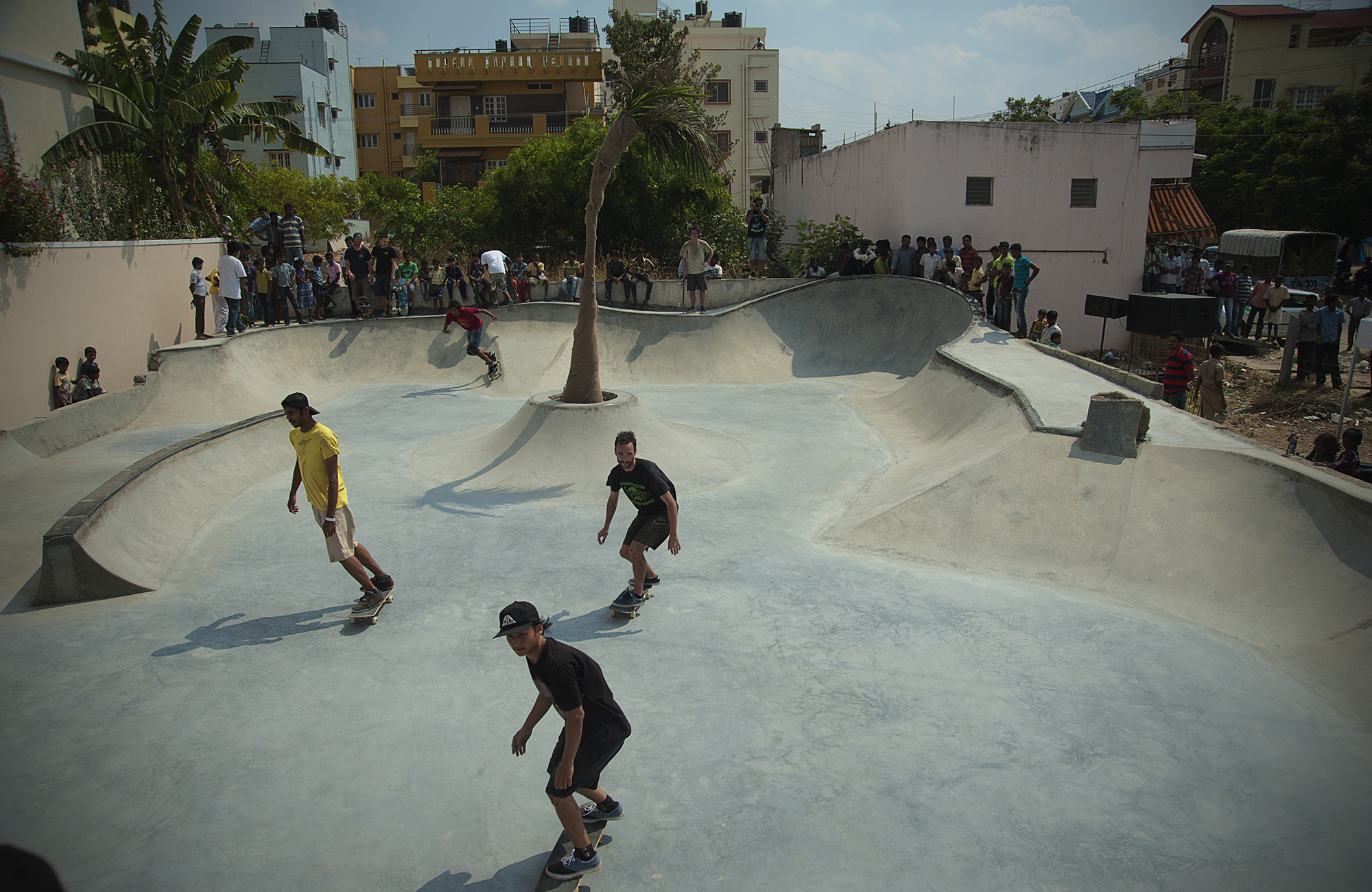 “We met a group of local skaters in Bangalore while traveling in India. They told us that they had a piece of land where they wanted to build a skatepark but didn’t know how to build it. Back home, we got a sponsor on board, and a year later built the country’s first public skatepark. Building India’s first little public park kicked off this whole thing, not only for us but also for the Indian skaters. There now is a full-blown country-wide skate scene with dozens of parks where there were none before. Really mind-blowing actually to think about this, just within the span of a couple of years!

The park is gone now, it was destroyed relatively quickly after construction. The piece of land we had was actually in a residential area and right next to this lawyer’s house who hated the skatepark and everything that came with it. He did everything in his power to keep the skaters away and unfortunately was successful with that. It was a bummer but in the end, the skatepark fulfilled its purpose. It taught the locals how to build skateparks, and they eventually went out there and made skateboarding accessible on their own by building 20 more skateparks throughout the country. A year or so after the park was gone, the local crew built their own neighborhood skatepark where they skate every day.” 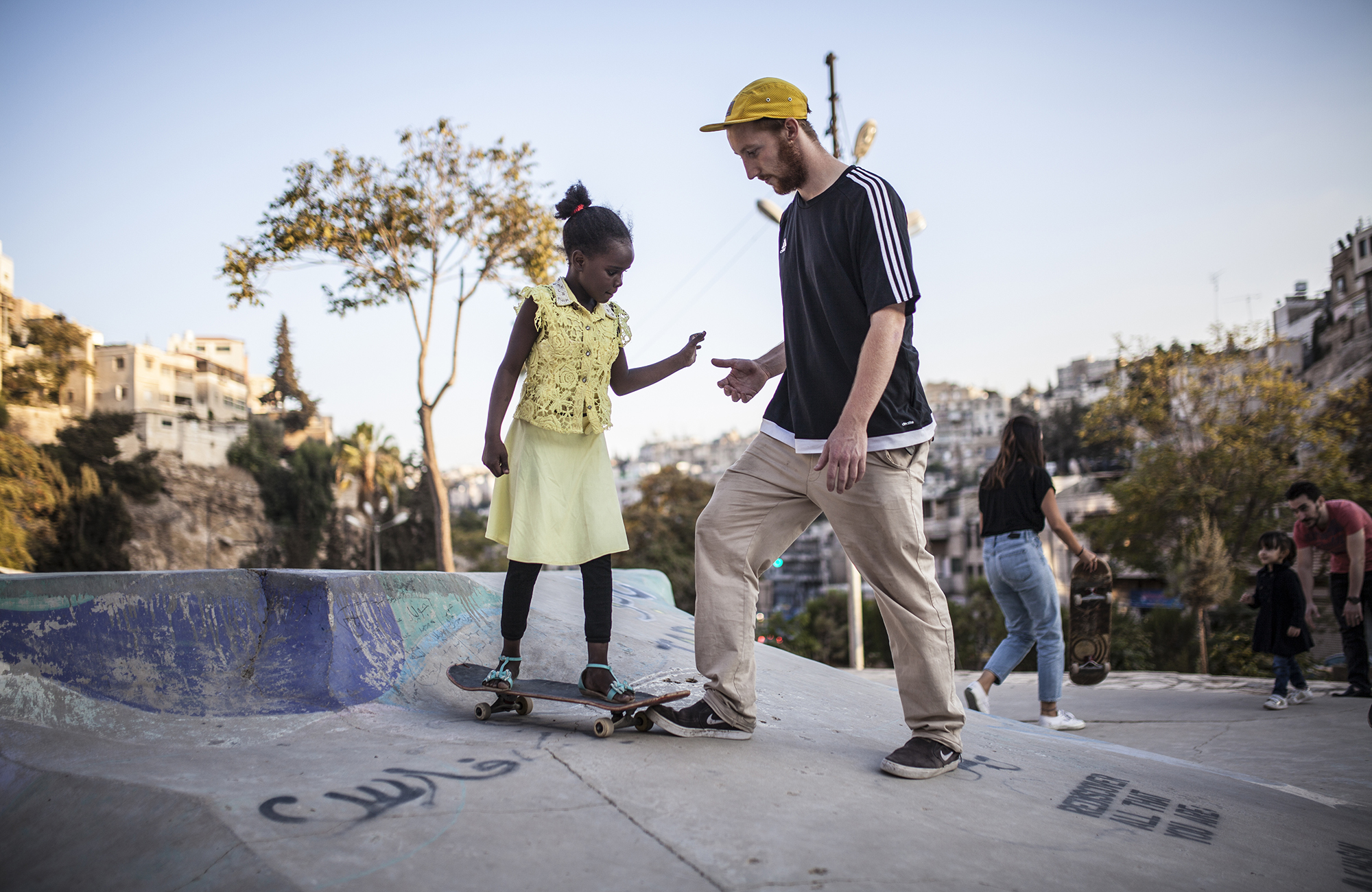 “The build in Jordan, together with Bolivia, was definitely the most challenging one. We only had a small crew of people who had never worked together before. I had to leave early because of work, but what I got from the others is that it was much like concrete carnage. It was probably the most DIY and the least world-class of all of our parks, but sometimes that’s all that’s needed. We had a lack of funding and it may not be the best quality but it’s being put to use like no other park and that for us is the most important thing.” 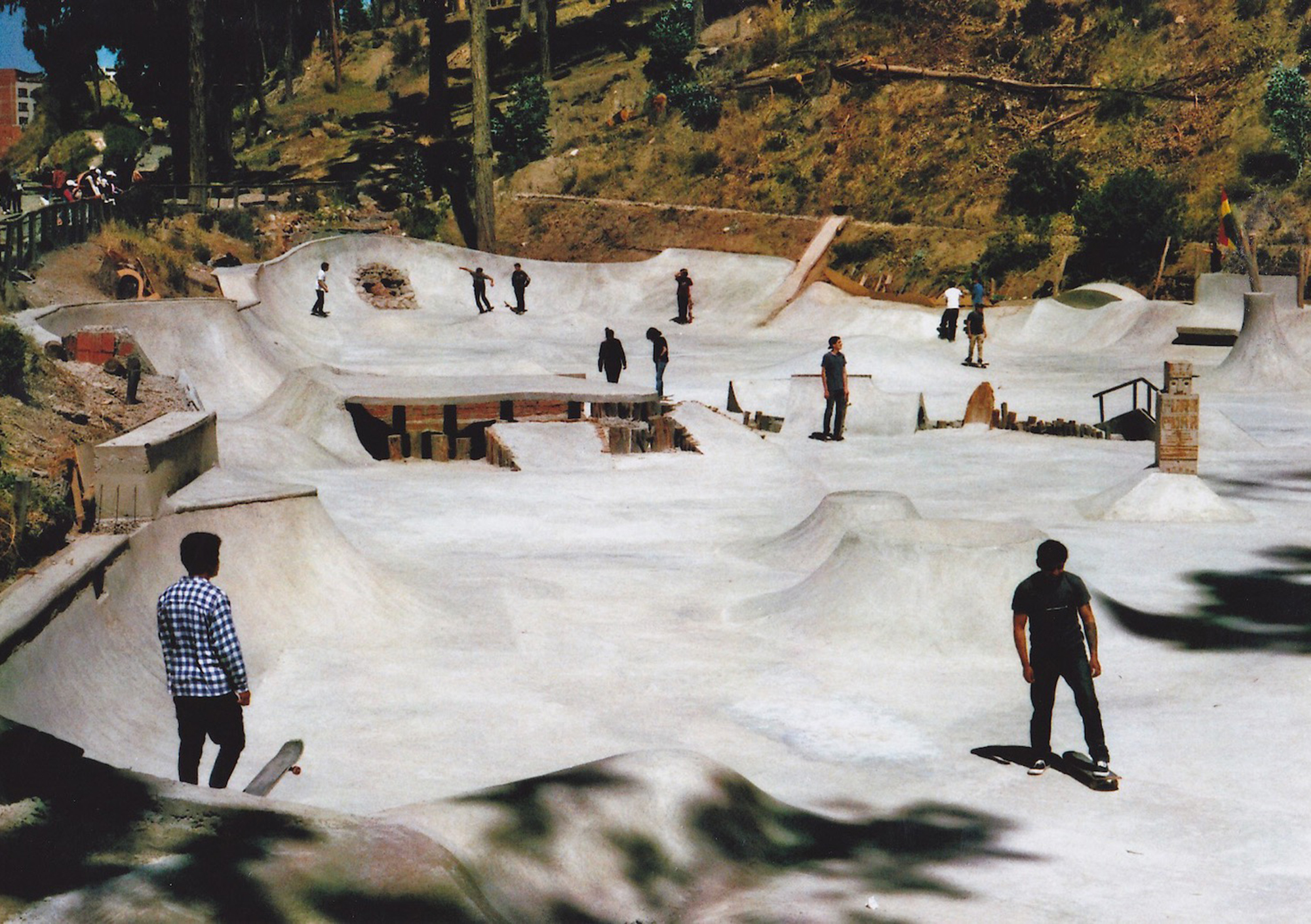 “In Morocco and Bolivia I think we had over 100 builders. That’s kind of a point of contention among builders because with 100 people you’re always working on top of somebody else but at the same time, the stoke energy level is completely through the roof. I call the big ones “rave builds” because the party don’t stop.

The drawbacks are you set your screw gun down to pick up a board, and look back down and somebody has run off with it so they can use it. A lot of people don’t bring much to the power tool department. But, at the same time, people bring these little insights from the way they saw the geezers do something wherever they’re from on the other side of the planet. The energy exchange is what makes these things so special.”

“For Bolivia, we had a pretty decent budget available and the first thing we did was booking flights for more than 40 DIY experienced skaters from all over the world so that they could join the build. This turned out to be a logistical nightmare between fluctuating ticket prices, an Indian skater named Shake who doesn’t have a last name, people getting their passport numbers, birthdays, or even names wrong, and other kinds of requests for changing bookings. But eventually, we had a team of over 100 volunteers from 17 different countries, making the project the largest gathering of skatepark builders ever.”