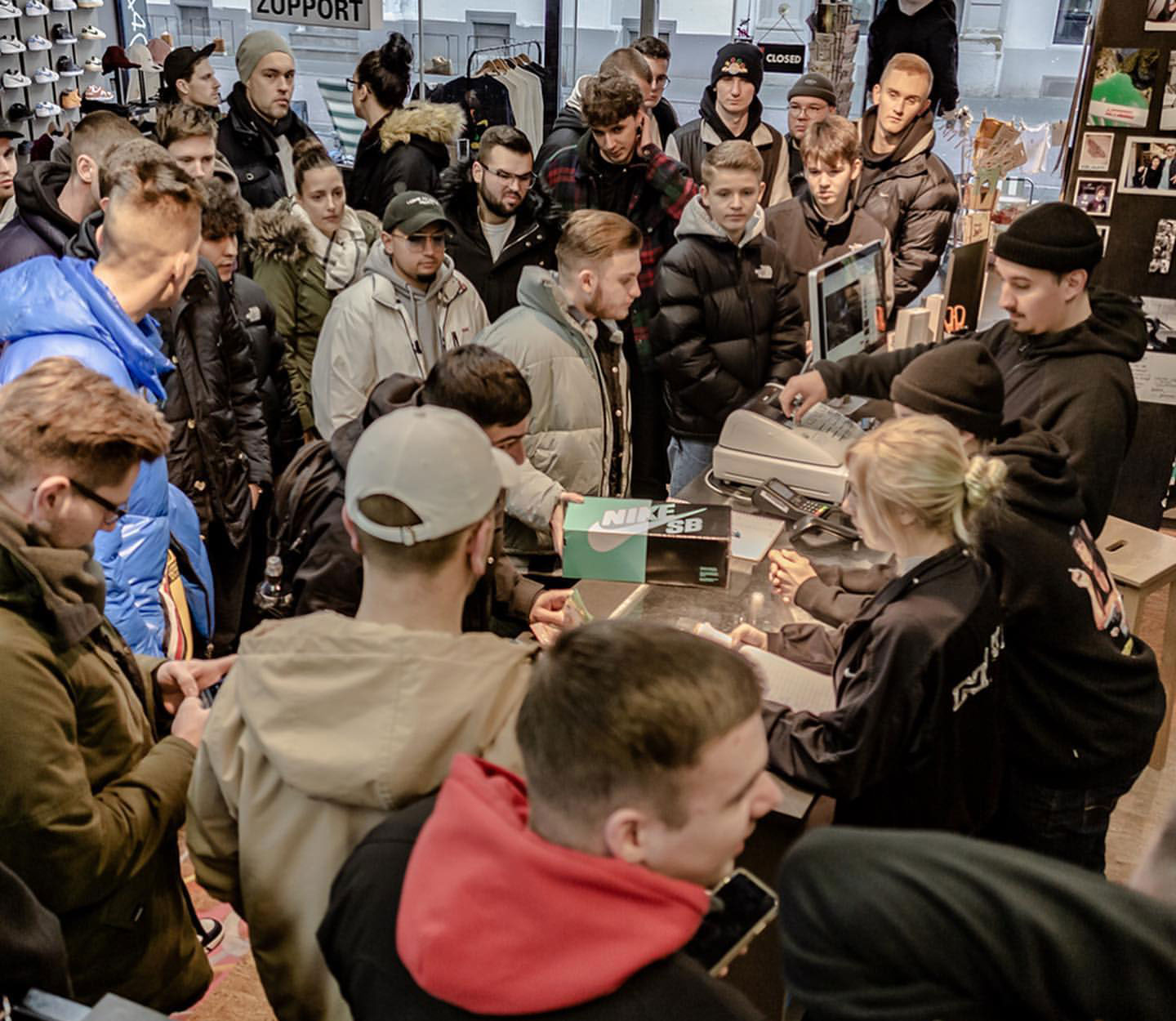 The days of sneakerheads mobbing your local skate shop for Nike SB Dunks are back. Fashionistas, resellers, and hypebeasts have come out en masse for the quickstrikes—Nike’s umbrella category for limited release shoes—that have dropped in 2020. Leading up to those drops, the standard skate shop workday of arguing about what to queue up next on YouTube and occasionally gripping a board now abruptly transforms into keeping sneakerheads at bay.

The Travis Scott Dunks, which were released in skate shops last weekend, were a financial blessing for skate shops but also a headache for employees. Although shops posted detailed info on social media about how the shoes would be raffled, they were inundated with calls, emails, DMs, and comments from people dying to find a pair.

Some shops, like Andrew in Miami, had a laugh making people rap Travis Scott lyrics over the phone just to get in the raffle. Other shops, fed up with the hype, posted their release info and unplugged for the week, turning their phones off and disabling comments on Instagram. Crushed in DC received over 100 calls in one day.

Of course, because these $150 shoes sell for over $1,000 online, there’s also a tangible financial incentive to get a pair. StockX, the main shoe resale website that handles these transactions, is funded by venture capitalists and valued at over a billion dollars. Reselling sneakers has grown from an eBay hustle into an industry, and skate shops have become inadvertent players in it. 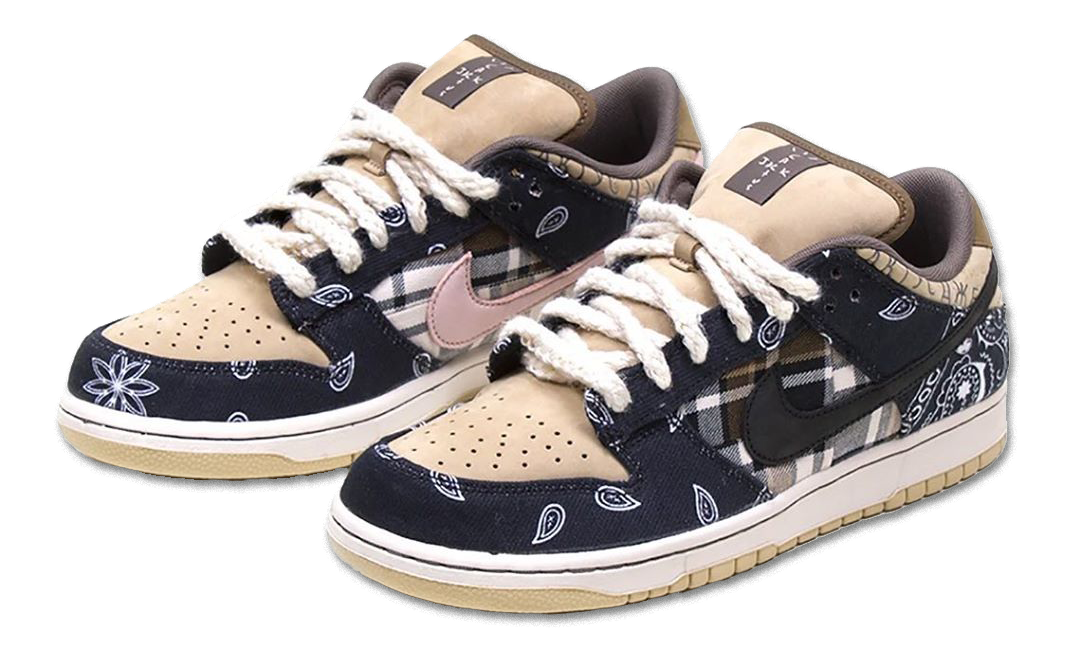 the cause of the commotion

Nike’s latest entry into the skate shoe market was initially successful in part due to hype built around limited Dunk releases. Some skaters were into the shoes, but so were people that had nothing to do with skating. “SBs were sort of a way where legit skaters and sneakerheads, who were sort of adjacent to skaters, met in the middle,” said Jian DeLeon, editorial director of Highsnobiety. “It was this trojan horse that brought fuckboys into skate shops.”

For a handful of years, the only way to get a limited pair of Dunks was to buy them from a skate shop. People camped out overnight to be first in line when shoes dropped, and some resold them on eBay or in sneaker shops, but the hype was much less than the Jordan releases at the time where people routinely got robbed and occasionally got shot. 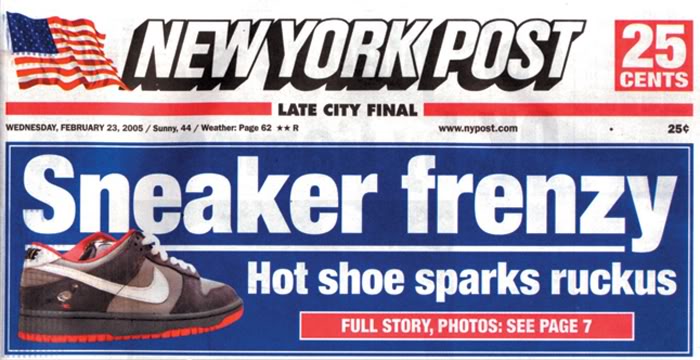 Eventually, the Janoski moved into the spotlight and Nike broadened distribution of SB to mall shops, as well as selling the shoes directly on their website. It was a one-two punch for many independent shops, like Sunday in Buffalo, NY. “It flooded the market. It made it not special,” said JP Gillespie, who owned Sunday.

Other shops also drowned under the debt imposed by Nike’s aggressive sales policies at the time. Back then, Nike purportedly forced skate shops to buy a minimum amount of general release SBs just to qualify to buy quickstrikes. In a 2016 interview, Ed Selego claimed this policy contributed to him closing one branch of his MIA shop in Miami. (The only other branch closed not long after.)

In 2018, Nike SB brought back attention to their limited Dunks by collaborating with Diamond on a third Dunk, taking design cues from their wildly successful 2005 model. The rarest of the three new colorways was supposed to be released at ComplexCon, but after a near-riot broke out, the shoes were escorted out by police. The shoes were released in small quantities, both through Nike’s SNKRS app and from key Nike SB shops, and sold out almost instantly. Nike quickly picked up their playbook from 2010 and started regularly releasing limited Dunks, often collaborating with the same artists, designers, and brands from the first time around.

One of the biggest differences between the first and second eras of SB Dunk hype is that, with a robust resale market available at people’s fingertips, many more people are trying to get the shoes. “It’s a complete product of smartphones. Exposure spreads like wildfire on social media, and on the other side of it, there are the selling apps,” said Trevor Culley, one of the owners of Seasons in Albany, NY. Seasons canceled their release of a pair of Dunks designed by Sean Cliver after an SUV full of big dudes from New York City pulled up and told the people in line that they were going to be leaving with shoes one way or another.

“A year ago if you told me we’d be releasing sneakers through an app, we would have laughed…and now it’s come to necessity out of safety.”

“We kind of anticipated with the [Cliver] dunks and saw it coming. We stretched it out as long as we could as far as doing it the old school way of first come, first served,” Culley said, adding that they had heard about the same guys doing the same thing to other first come, first served shops in the northeast. Seasons released the Travis Scott Dunks through a sneaker app recommended to them by other shop owners. “It’s nuts,” Culley said. “A year ago if you told me we’d be releasing sneakers through an app, we would have laughed and said not our shit. And now it’s come to necessity out of safety.”

To deter potential robberies, many shops that got the Travis Scott Dunks made a point of posting that the shoes were never going to be in their store, and between the time the shoes sold out on Scott’s website and their release in skate shops, someone came into a sneaker shop in Asheville, NC in a ski mask and robbed them for three pairs at gunpoint.

JD, who owns Holistic skate shop in Pennsylvania, doesn’t currently stock Nike shoes, and he’s aware of the benefits and hassles. “It seems like they deal with a lot of man-children, people that just wanna win a raffle and if they don’t win they cry about it. And from the skate shop’s perspective, that’s not fun to deal with,” he said. Some shops, like Deluxe in San Francisco, also reported that the app used to coordinate the raffle broke, which added to the frustration for both shop employees and sneakerheads.

“But at the same time it probably really helps with shops making their rent,” JD said. “If you have a shoe that’s $75 wholesale, it’s retailing box price is $150. Some shops will sell it for $150-200 based off of market value. So if you can sell those within five minutes of the shop opening its doors on a Saturday morning…that’s like rent.” 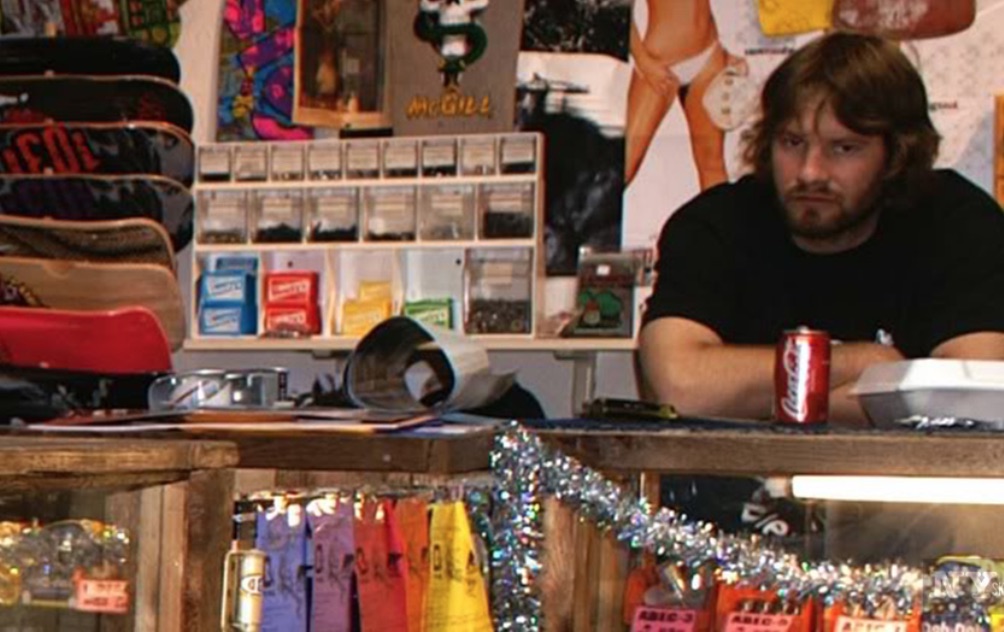 In spite of all the hassle, most shops that are getting the coveted releases are taking it in stride, and finding ways to get the most out of the extra precautions they need to take and the pestering sneakerheads.

For some, that has meant moving away from handing out one raffle ticket per person and offering more to people who buy other things from the shop. “Part of the issue with raffles is if you just do a straight ‘everyone gets one ticket,’ there’s no way to filter out the resellers who are like, I’ll bring my nephew and all his friends in, and we’ll have 20 people and 20 tickets, and have a pretty good chance to win,” said Ben Jones, one of the owners of Kinetic in Wilmington, DE.

A couple hours north of Kinetic, in Bethlehem, PA, Homebase ran a Help Over Hype campaign. They handed out a free pair of Travis Scotts to the best random act of kindness performed, and offered a guaranteed chance to buy shoes for whoever could do the most community service hours. In the end, they generated over 1,500 hours of community service.

“This is a week and a half of hassle for a shop to be financially solvent for the next several months.”

Whether skate shops are using the demand for hyped shoes to get people to volunteer in soup kitchens, do kickflips on demand, or simply keep their lights on in the middle of winter, it’s good to see them benefiting from the confluence of skating and fashion.

And like the beginning of the first Dunk boom, the hassle has been worth it. “This is a week and a half of hassle for a shop to be financially solvent for the next several months,” Jones said. “All of the employees are going to get paid. We’re going to be able to give our managers extra because of this thing, which they deserve.”

The Dunk hype may dissipate eventually, but until then, if you’re trying to find a highly anticipated pair, being a pain in everyone’s ass won’t help you.