Introducing a brand or video can easily feel weird and forced, like when you’re on a first date and you end up blowing it by trying too hard. That’s why we like to write about skate videos as if we were talking to a friend.

You don’t have to watch this video, but highlights include a dude doing a blunt on a rooftop mini, tasteful special effects, and more than one good-ass kickflip.

“Possibly Maybe” is a remix of b-sides from a short Converse video, “Chuck Riders”. This VHS edit also features the Converse Brazilian team in São Paulo, and it’s all filmed and edited by a man known as Hernando “Ñaño” Ramirez.

Ñaño runs a brand called Asco, where he makes the standard shirts and hats, but also these neat collar-less polos (didn’t know that was a thing) and women’s swimwear. If you like cool and fun shit, you’ll probably like the stuff coming from Asco.

So watch “Possibly Maybe” above, read more about Ñaño and Asco below, then scroll down to the comments and complain about how this video looks too much like a Palace edit, because all skateboarding is 100% original and no two people can ever have their own take on a similar technique. 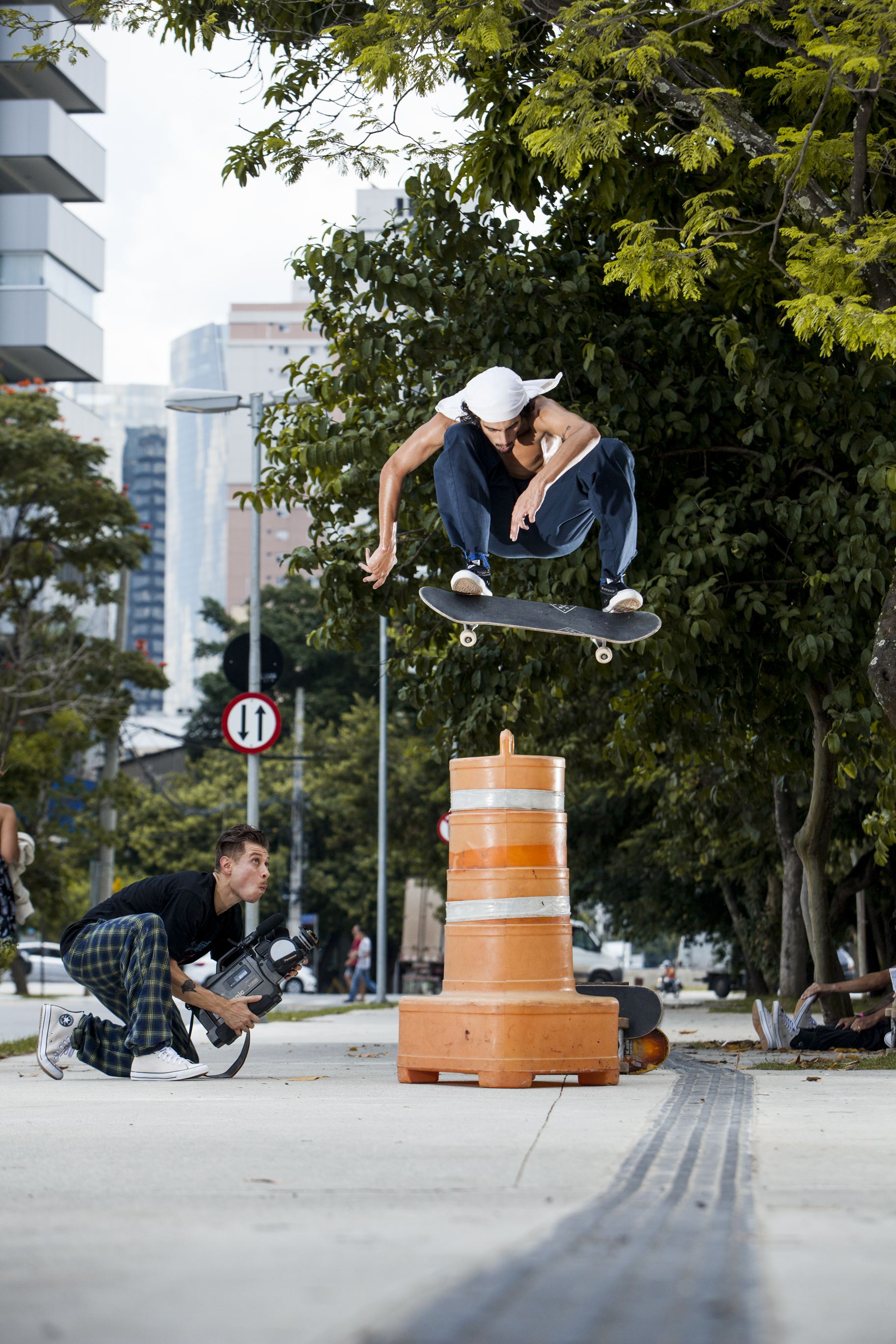 What does Asco mean?
The translation exactly means “disgust.”

So why did you pick that?
When I started it with a friend we made a list of 100 to 200 names and somehow Asco made sense to us. It’s not “disgust” like, someone’s barfing it’s so disgusting. It can be applied to many things like political opinions, music, movies. In Spanish, the use of that word is not as limited as in English. You could use “asco” to say something is uncomfortable or if you’re not happy with something.

So “asco” isn’t the same as saying “sick” in English to mean “cool”?
Yeah, it’s not like that. 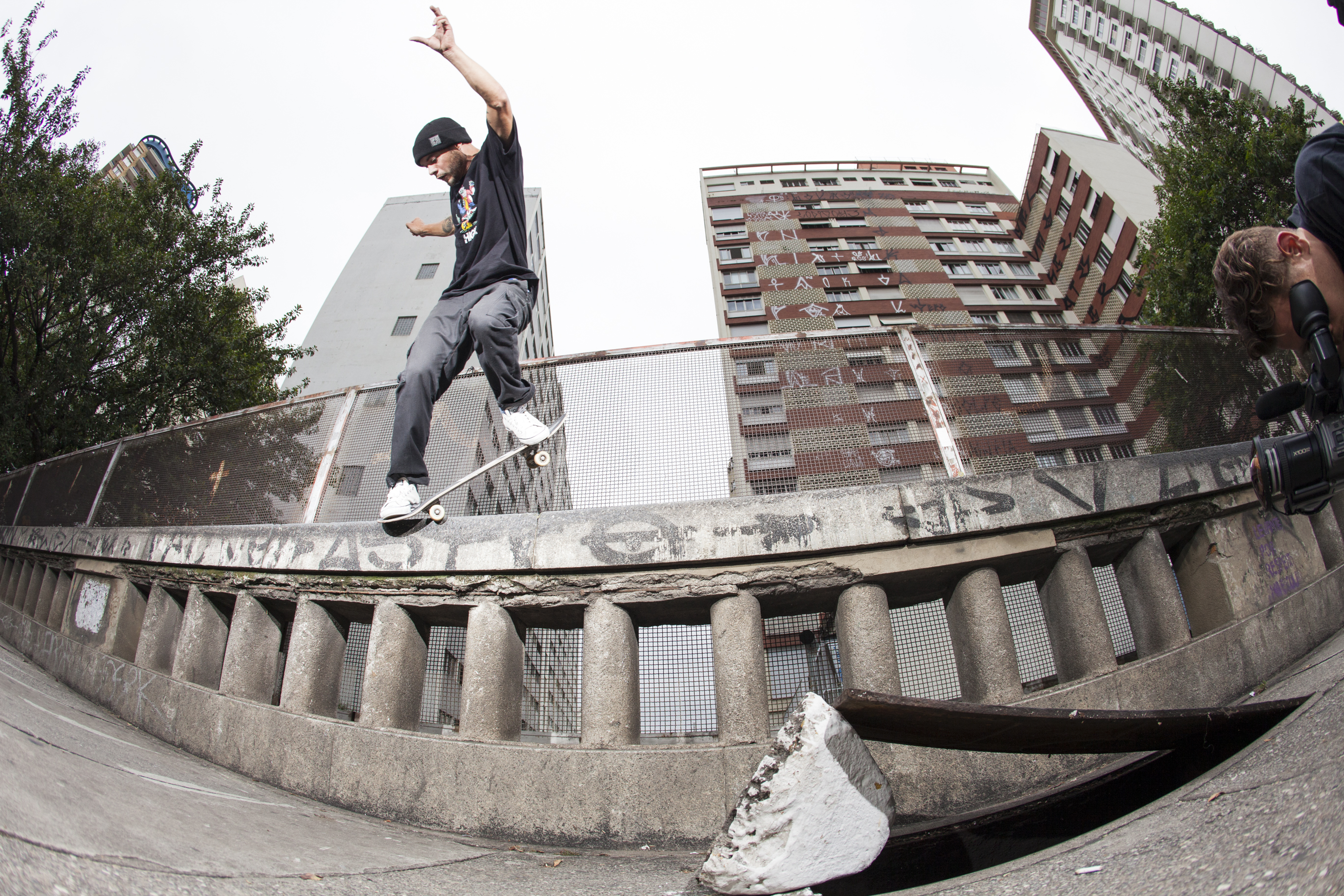 I know you sell merch and make videos under the Asco name, but what is Asco?
When we started it was just a zine that I made with my friend. I started thinking about making some T-shirts with the name and he didn’t want to be involved with a brand and doing products, so I started doing it on my own.

I always made it a hobby because I work in designing motion graphics for advertising and TV. There was one year where I really dedicated all of my strength to the brand and it was getting really good, but Argentina suffered an economic collapse. I got really fucked up about that. I was like selling a T-shirt and then going to the grocery store. Right now it’s really small, like a few T-shirts. It’s more like when I’m in the mood to make new stuff, I make new stuff.

Two years ago I was invited to Rio de Janeiro for a film festival and I decided to move here and do it here. There’s a bigger population and a lot of skaters are really good. You can go to any plaza and there’s some random kid killing it. It’s crazy here in Brazil, the level of skateboarders.

What’s the deal with the guy in the video who has a shaved head and face tattoos?
The face tattoos are something he got two years ago. He was a really tender kid and I don’t know what happened to him [laughs]. I came back to Brazil and he was like that and I was like, “Fuck, man, what did you do?” [laughs]. 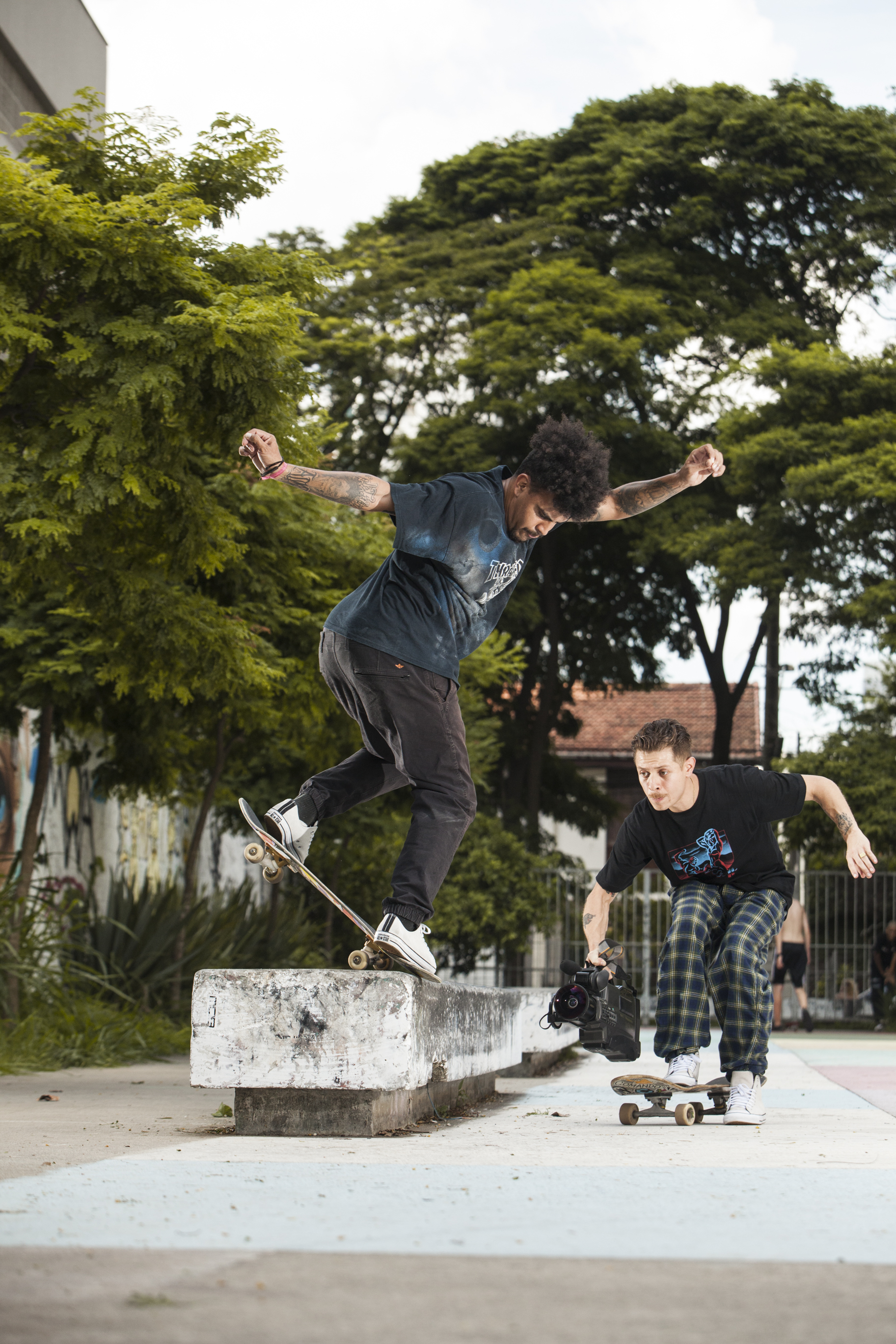 Since your job is a motion graphic designer, did you make all the animations in this video?
Yeah, in this video I made everything. It’s all thanks to my work. I work in a lot of really professional motion studios, for broadcasting mostly. Like the news image branding for Fox or if someone is watching TV and it says, “Blah blah blah, up next, another show.” Those graphics.

Have you always filmed with a VHS camera?
Since I got the camera, yeah, but now my camera is broken [laughs]. I finished the video and the camera broke so that was the last video I made with that camera.

Why do you like filming with a VHS camera?
When I started filming I had a Canon DSLR 6D and I always tried to do something grainy in After Effects or Premiere Pro to get that look. Then I started thinking I should get the real thing. I got the camera from a website in Latin America that’s like eBay, it’s called Mercado Libre or “free market.” I found it and made an adaptor for the fisheye, and I stayed with that camera until now. 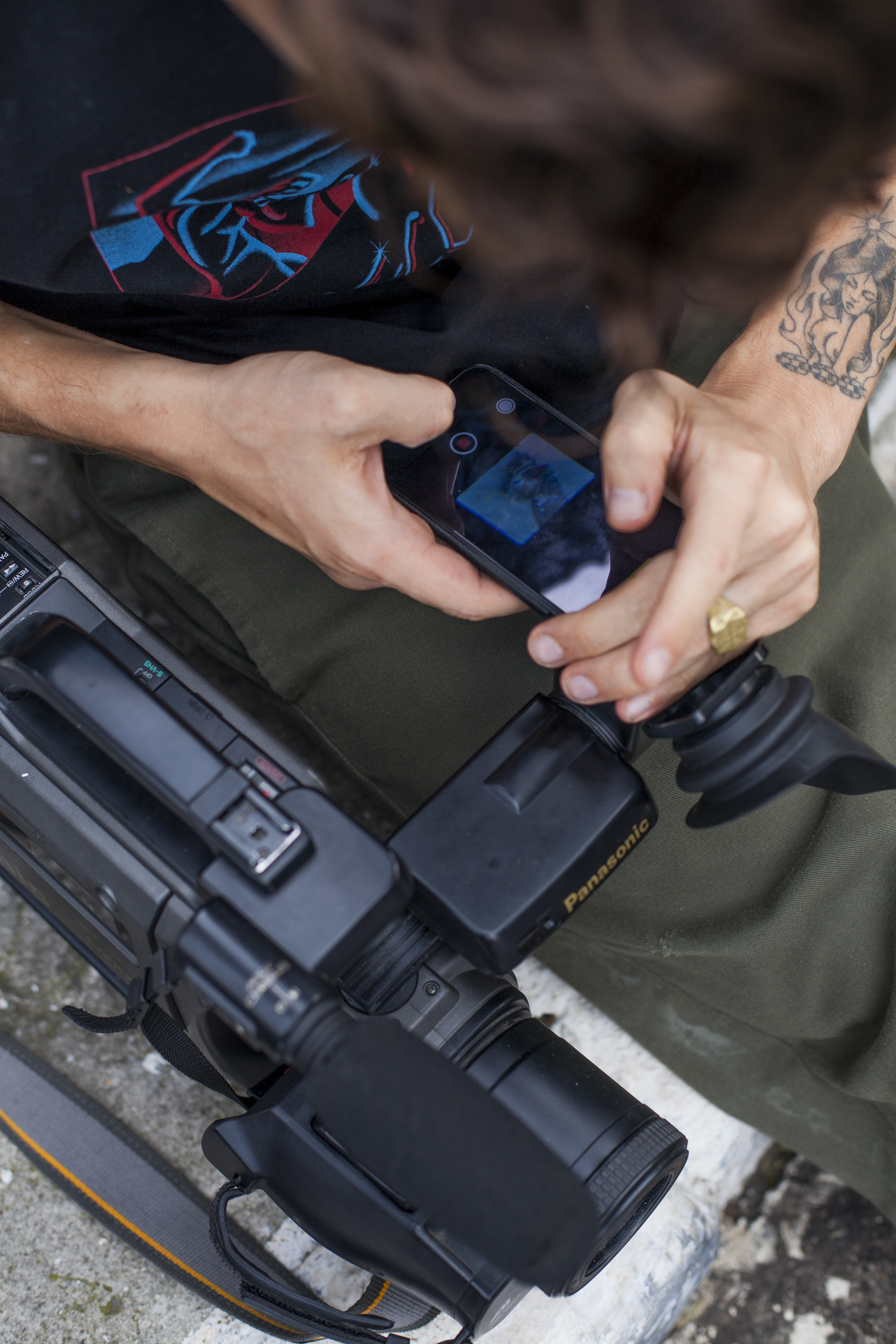 People probably tell you that your videos look like Palace videos. Is that annoying to hear?
No, no. I like Palace and I think it’s really cool. In fact, when I got that camera, it was like the same time Palace was using it. When I started Asco, Palace was starting and I was like, “Fuck, that brand from London is really cool and they use VHS.” Palace had like four T-shirts on their website at that time, but now it is what it is and they’re huge.

Now people are like, “Oh, you’re filming VHS like Palace,” and I’m like, yes, but it’s not to reference them. I think they started a little bit earlier but it was almost the same time.

Are there any difficulties to living in Latin America and working with skate brands? It can be difficult to operate outside the California skate industry bubble.
To be honest, in Argentina the skateboarding is good but the industry is really light. I never got involved in a serious project, but in Brazil I had more doors open up. I feel lucky to be able to work with guys like Kaue [Cossa], and now he’s on the official Converse team. He’s in Russia with Aaron Herrington and Louie Lopez and all them. 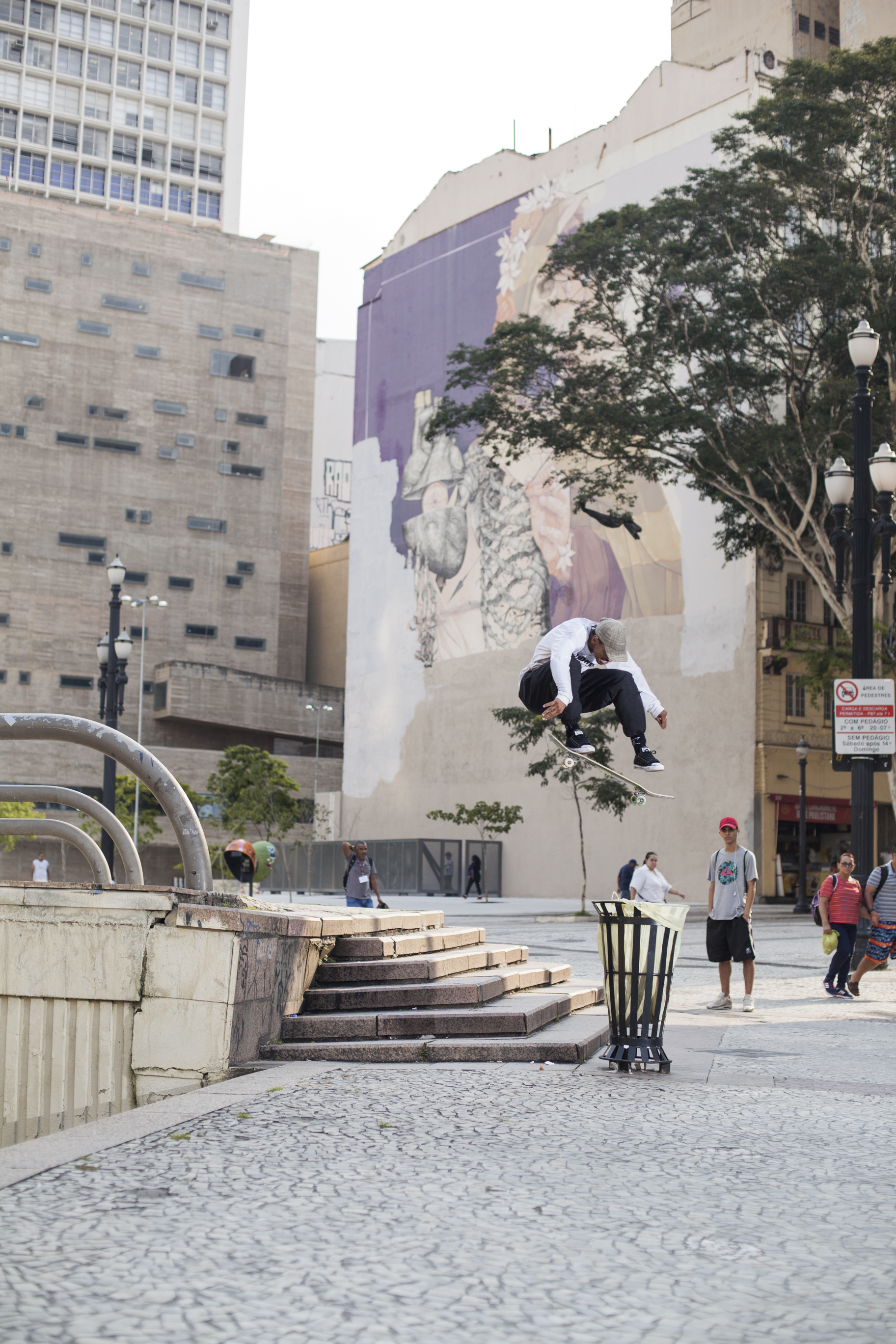 What’s up with the women’s swimsuits you made? Seems lucrative…
When I started the brand there were a lot of girls who were buying stuff, and I decided, OK, I don’t like skateboarding T-shirts for women. You know Quicksilver and Roxy, the women’s division? Like a pink T-shirt with a Quicksilver logo and in fluorescent colors. That is really ugly. So I was like, let’s start making women’s clothing that is really cool. So we made leotards and vintage jeans.

The leotards were almost a breaking point for me. I remember going to the manufacturer and he gave us the sample and it was perfect. Then when the guy delivered all the product it was all two sizes too small. The guy didn’t recognize that he was doing bad and I was burning my money. We figured it out somehow but it was such a hassle with that company. I’m from the motion graphics world so I’m used to control + Z. But with this stuff, you don’t have that. If you get a bad screen print then it’s fucked up. 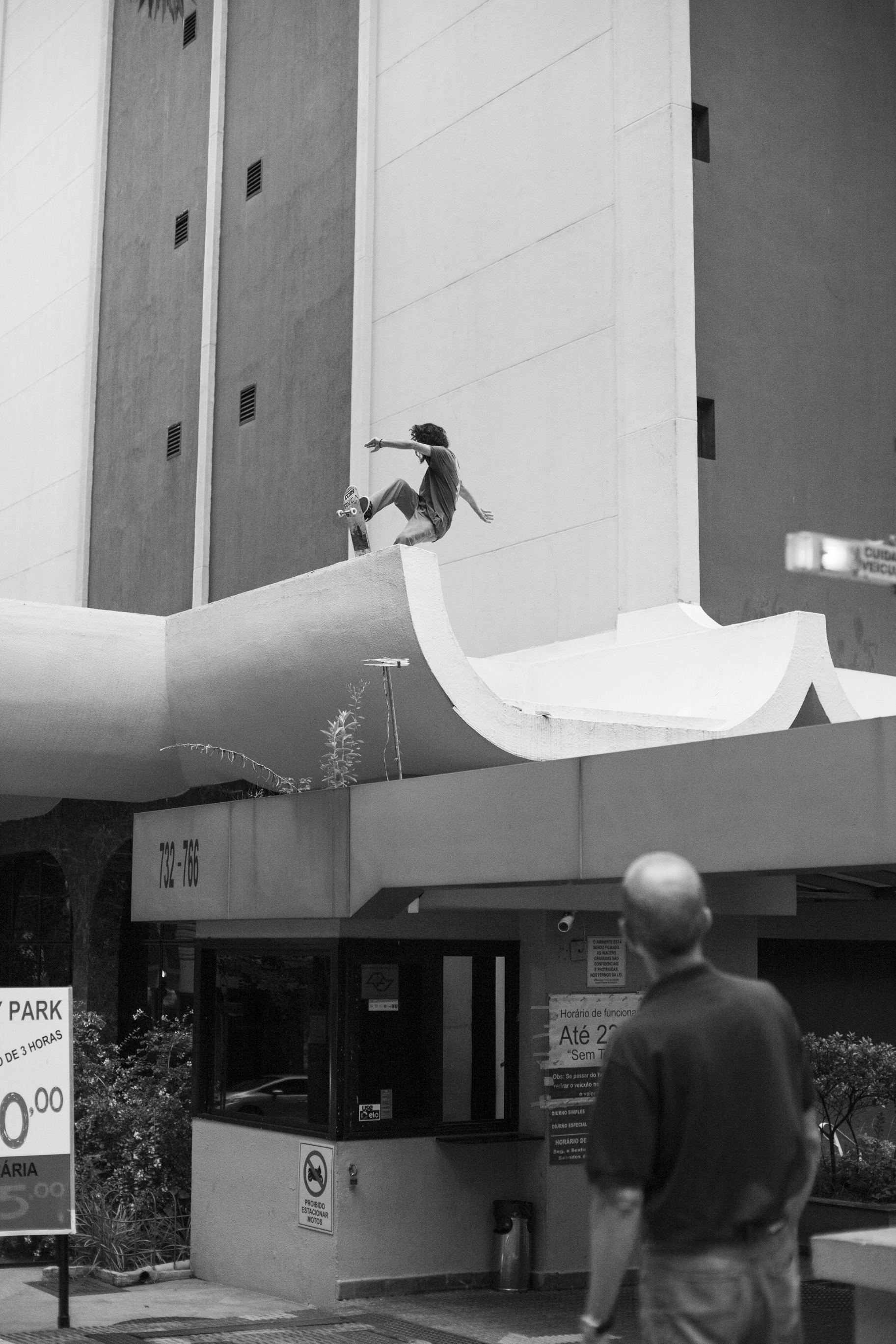 How did you find the models?
Instagram is crazy because everyone is a model, and because of that it’s easier to get in touch with people whose work you like and you don’t have to go through a third party-agency. It’s so easy, just like, “Hey, do you want to do a photoshoot? I’ll give you some product.” Like, I’ll give you some hats, some T-shirts and some jeans, and they were always like, “OK!”

I didn’t make them for making something sexy, I made them because I like women’s clothing too. They sold out fast, almost faster than the T-shirts. I really like that project because it was kind of risky. At some point I think I should just start a clothing brand for women.