A STONED REVIEW OF EMERICA’S “MADE CHAPTER 2” 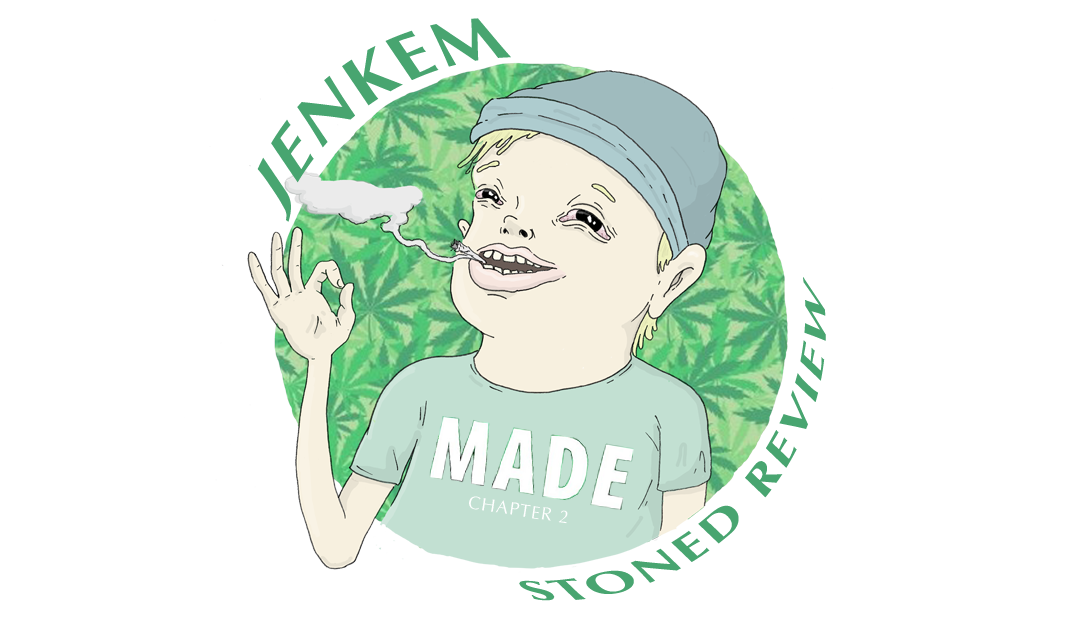 Today’s review is brought to you by Pax Vaporizers and the strain Jack Herer.

E-merica… the bad boys of Sole Technologies, situated right between the nostalgia machine we now know as eS and every BMX mall kid’s favorite: Etnies. These are the same people who brought us some of the best shoes of all time like the original Marc Johnson (which is really do up for a remake; hell, if Globe is reissuing Rodney and Chet “illusion flip” Thomas’s early millenium shit sandwhiches anything is possible) and some of the gnarliest woodpushers we’ve seen. Needless to say, I have pretty high hopes (pun intended) for this video. Now let me click my illegal download link and do illegal drugs while I enjoy being eye molested by green color tones during this intro… So we’ve got the line up and it’s looking good, but wait, there’s an {and} which means… industry shake up! New rider! 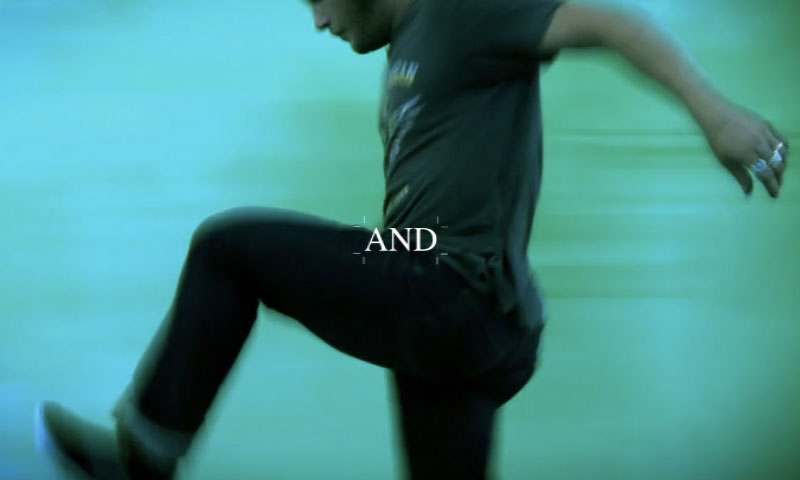 Jon Dickson is undoubtedly gnarly and should be someone you enjoy watching skateboard. Dude is so gnarly he skates with his keys attached directly above his crotch, so one wrong fall and his manhood could be mutilated by sharp keys/pocketknives/bottle openers. On top of that, just look at him… I’m more worried about the ground cracking when he falls than any of his bones. Jon is straight handling business on handrails strictly above his waist. Dude isn’t afraid of skate stoppers either, just kickflip boardslid right through them. I’m pretty sure this guy’s mutton chops grow in all by themselves with no shaving involved, I’m also pretty sure he can play every Allman Brothers Band song on guitar. 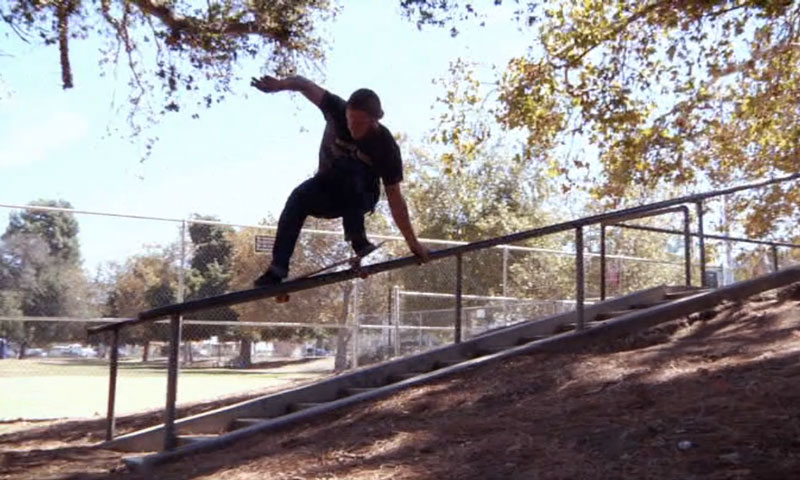 Damn, he just frontside smithed down a handrail while fucking grabbing the rail with his hand! Respect. Some of these banks he skates seem like they’re made of cheese graters, and I don’t doubt it. The music is kinda annoying… sounds like your friend’s jazz prog metal band that he thinks is just so sick. And the ender at CVS is just fucked up, if he stuck on that kickflip, all the generic perscription pills in that CVS couldn’t help him.

Next we’ve got Herman, who is really trying to drive home that sunglass endorsement. Holy shit, it’s like every other trick. Maybe after so many years of doing hardflips and nollie heel variations he just wants to look down and see something different. All credit due, this part is sick and he does some ill shit, long frontside crook nollie backside flip out is notable, same with that nosepick on the tall cement pillar. And now look who it is, it’s his boy, his mentor, The Boss. 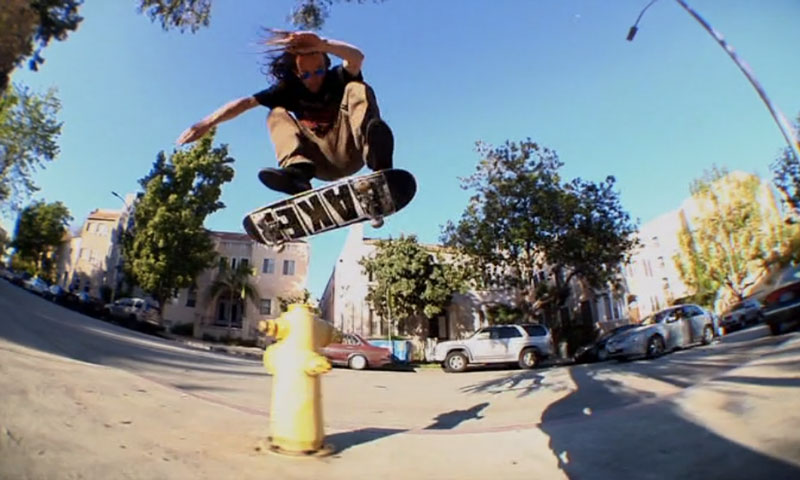 Reynolds to me is untouchable in skateboarding, you know what he’s going to do in this part and you’re gonna sit there and enjoy it because it’s pure art. Sure, people will call him out for milking his kickflip and fs flip every part, but it’s only because he’s reminding you HE HAS THE BEST IN SKATEBOARDING. Would you tell a chick (or dude, whatever you’re into) to stop showing you how good they can blow you? Of course not, you sit back and enjoy it!

And damn, he’s still doing shit in this part that I would never expect him to do: fakie ollie body varial over the bar at 3rd and Army? Fucking dope. Dude just has unmatched board control when it comes to flip tricks, it’s like his special meter is always full. 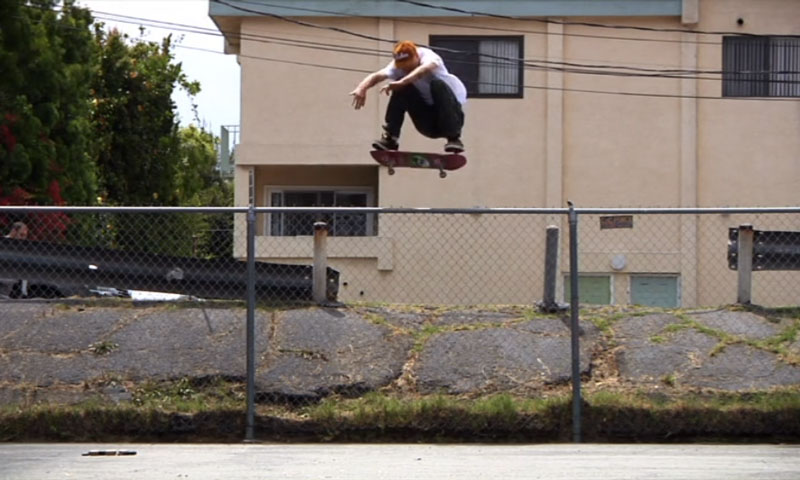 Now we got some guys I’m not too familiar with, I guess this is the Euro ams section. I like this first guy with the pedo-stache, he looks like he’s gonna try to sell you coke after doing a sick line at your local spot.

Woah, boardslide down a hubba then onto a rock, well, rocks. This other Kerry Getz looking dude is sick too, ender 50-50 to pop out 50 on the aluminum jawn was dope. You gotta be thinking outside the box when doing tricks these days because every am is just so damn gnarly… and there’s 10,000 more kids trying to snake you on Instagram… just ask Clint Walker. 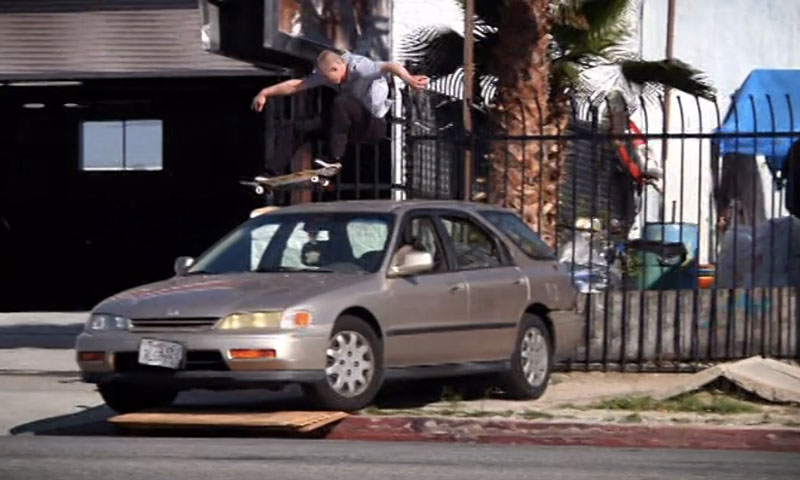 Now we got a 3 for 1 part coming up: Leo Romero, Iforgethisfirstname Leabres and Brandon “Donny Barley nano” Westgate. Shit, Westgate opening it up by literally ollieng over a car from a propped up sidewalk tile.

Leabres dude always smiling at shit before he skates it… kinda weird, but whatever works. Alley oop front 3 over the rail was legit, so he must be doing something right. I love when people get towed in by a car to do a trick, because it means the obstacle you’re skating is so gnarly your human legs can’t even generate enough speed to skate it. Do the math.

I like how they’ve been peppering in clips or lifestyle shots of the next skaters part in the skater before them’s part. Like here, now we got a metaphorical “video part hand off” via hug from Westgate to Provost and his Wendy’s the hamburger girl haircut. 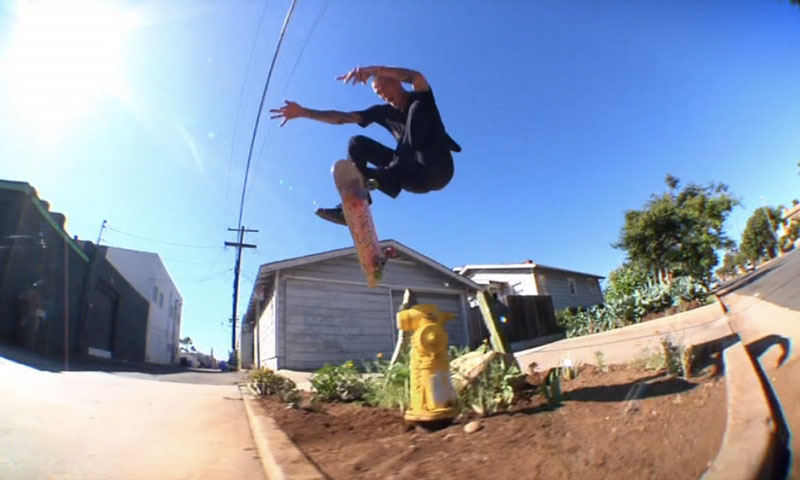 Damn, and first trick is already insane… dude wallied off a curb and frontside boarded a garbage can. That must’ve made a lot of urban cellar door dwellers happy. Dude can skate the most awkward, short steep tran so easily… I honestly think it’s because of his freakishly long legs. He just generates serious height off of the smallest tran.

Damn, one footer over the death bank was so fucked up. That thing looks like it’s made out of rock hard marshmallows. 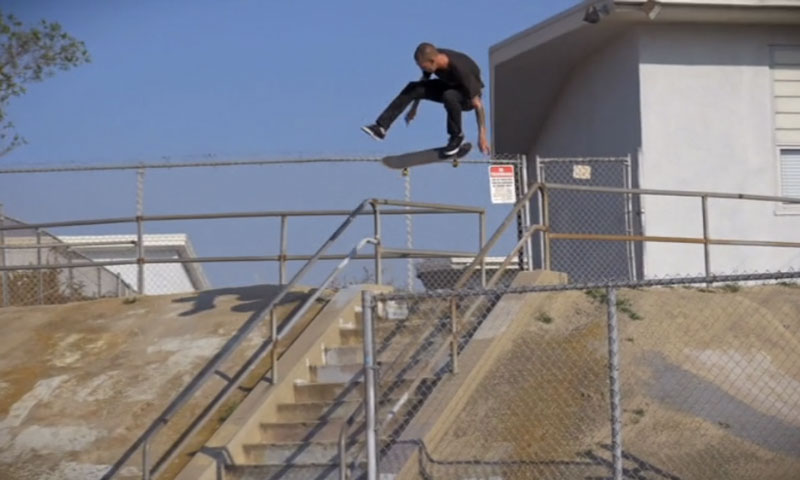 And now for skateboarding’s favorite little emo manchild, Spanky. He kinda looks like a Kevin Bacon/Austyn Gillette hybrid. By the way, Kevin Bacon’s grandfather was one of the head designers for Love Park in Philadelphia (R.I.P.) – the more you know. Dude’s skating is ok… he always manages to pull some ok tricks, with some ok style… it’s just… ok. 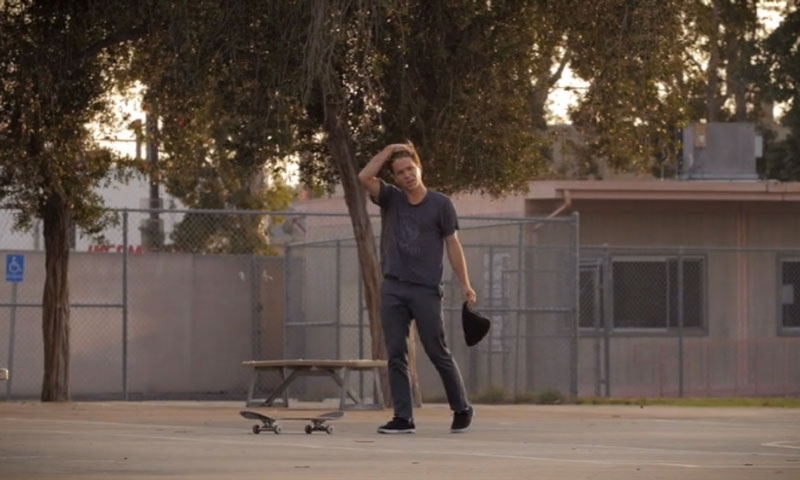 Has the same song been playing the entire video? Goddamn, I hope they saved a lot of money having the same band do the entire soundtrack. A lot off wallrides, and wallies in this part, but that’s ok. This part is definietly getting better as it goes on, some sick shit like the switch noseslide 270 kickflip out and the ender ollie frontside wallride down the big set makes it pretty damn ok in my book. 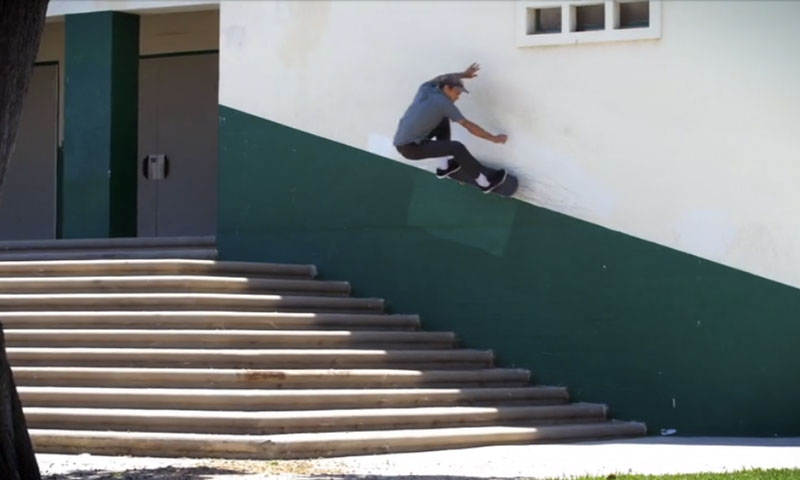 Everybody make loose fists and turn your palms slightly up, because it’s Jerry Hsu‘s part. I’m expecting great things here. This music straight up sounds like a shitty Mega Man stage… what the fuck happened to putting good music in skate videos? Are the rights just too expensive?

Jerry is doing some sick shit, the nollie hardflip on the huge waterfall looking bank was just beautiful, like for certain people, that will bring a tear to their eye.

Oh shit! Now it’s a cool little trifecta of tricks from Heath, Andrew Allen, and Louie Barletta. Nice touch, very nice. Wow, that back nosegrind tail grab back 180 out was fucked… good shit. AND ENDS IT WITH A DARKSLIDE FAKIE??? FUCK YES. 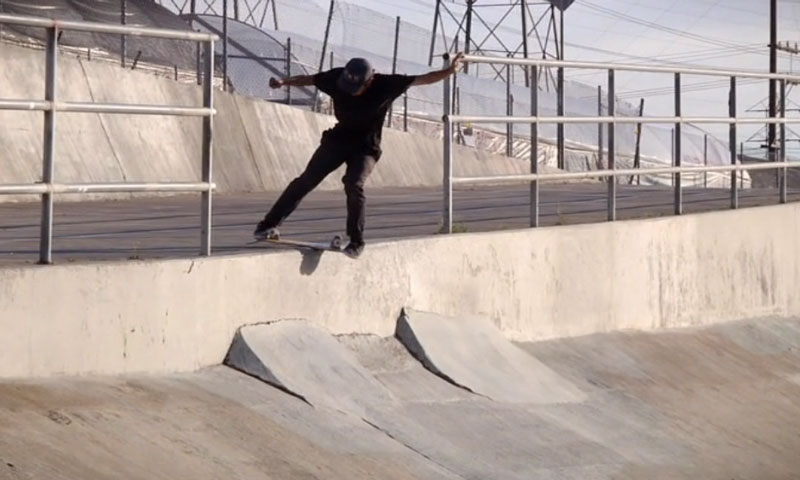 And now we got Figgy, who’s 50-50ing directly into a pole at the bottom of a handrail over and over. I’m always reading on messageboards: “Figgy was a total douchebag when I met him, skated with him, had him over for a sleepover in midleschool…”, but the man is fucking gnarly, so if what I’m hearing is true he’s one of the gnarliest douches out there.

Oh wow, and they just showed him break his arm… really driving that gnar point home. Nollie frontside board down the skatestopped rail just sounded awesome… more gnar points. Kickflip 5-0 with corn rows in the rain… another point. Dude also seems to be really into oversized flannels too. 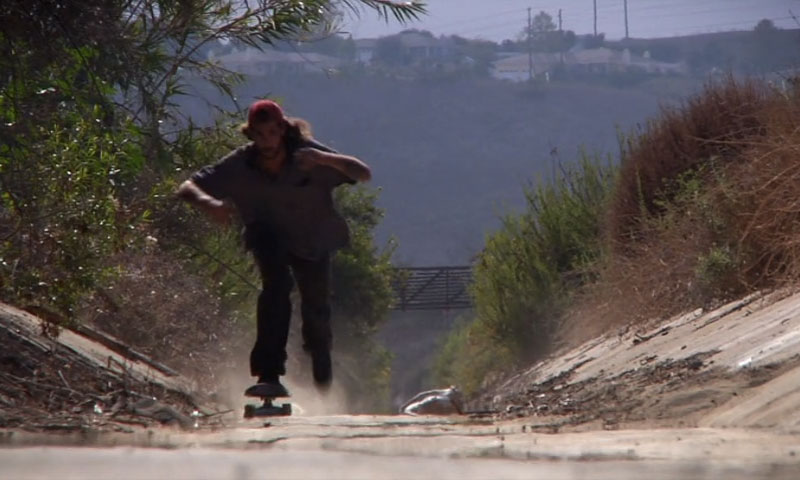 Holy fuck, he even fs feebles through what I think is the same skate stopped rail that Jon Dickson skated. Change of song pace…. and guest tricks means we have the ceremonial 2nd half of the last part that’s even more gnarly than the first coming up. A lot of banks getting shreded here. Gap switch flip into a bank over the mulch bank was notably fucked. And his ender… holy fuck, crook early grab pull over into the bank. I’m pretty sure he’d be grated to a fine dust if he stuck at the top of that bank and slid down, but he didn’t, so more gnar points for him. 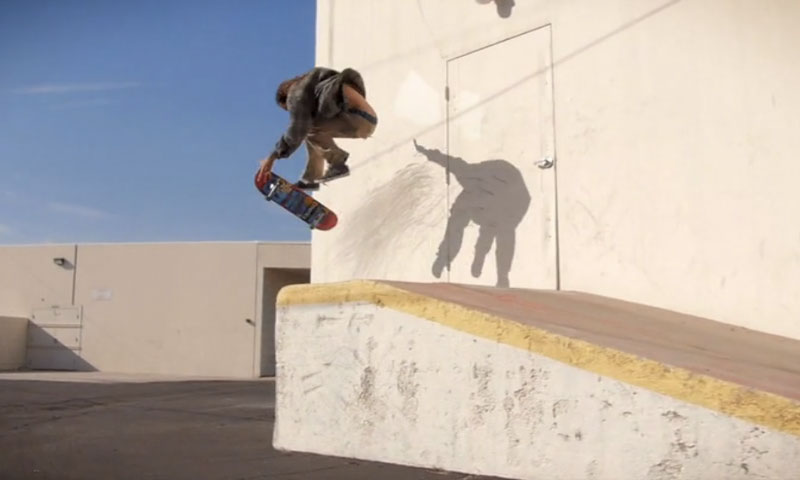 And that’s it, just like that the black and white credits roll with more shitty music to go along with them. And of course we’re also going to be reminded of the skaters that were in this film we just watched, as their names and images in green color tones pass completely randomly and in no order reflecting that in which we just watched. All in all, I’m genuinely impressed, but maybe it’s weed, this vape pen is some high-tech shit. This is a great skate video – sans music – to illegally download off the internet and/or buy into a certain product. later!