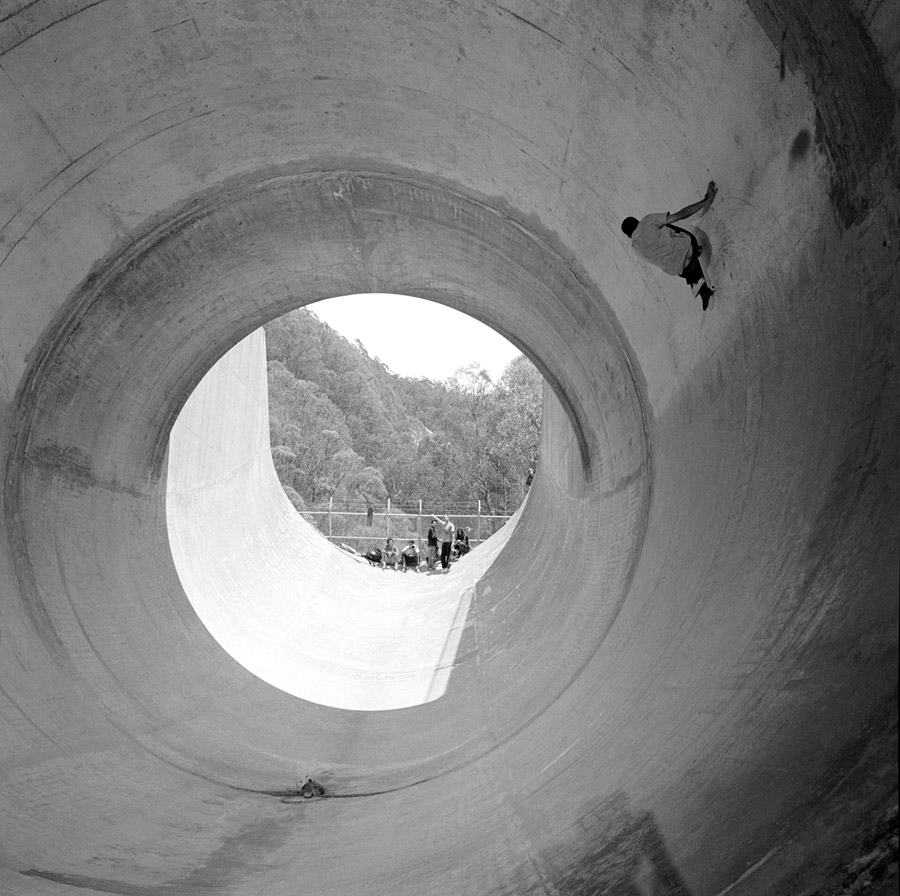 Peter [Hewitt] was the reason we were on this trip – we knew him and had taken trips with him (he was a big part of the film NORTHWEST we did just prior to TENT CITY). He introduced us to Julien and the rest of the crew and hyped us up. It was no surprise that Pete ripped this pipe but the way he ripped it was mind bending. He was slashing so high up that if he fucked up and fell from over 10 O’Clock he would have shattered his ankles for sure. Every time he took a run I would just start shooting and hope for the best – it was like he was in a trance – totally “possessed to skate.” – Buddy 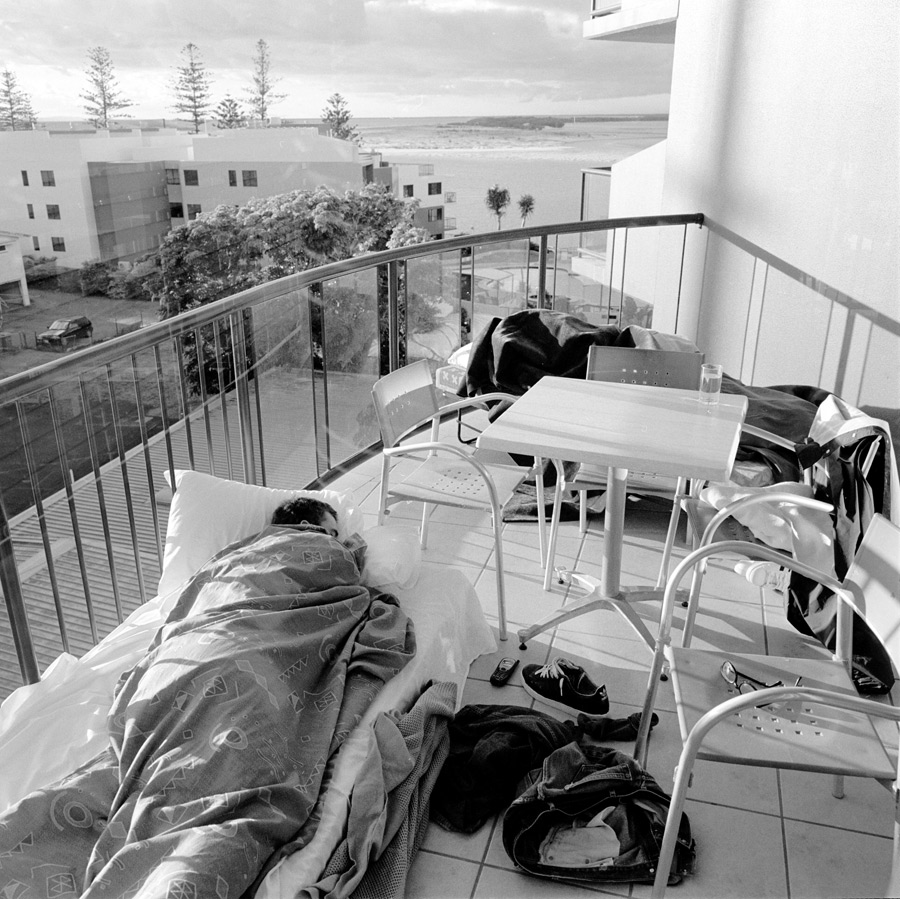 This was the first morning of the trip and Julien and the crew decided that hotels could fuck off. Too much time wasted checking in, checking out blah blah – we were in Australia to skate and be there, not in the sterile environs of an air conditioned box. We were outside for the next few weeks until we were in Sydney for a couple nights and got bunk beds in a youth hostel (which some of the crew didn’t use). Then we were back on the ground for the rest of trip. – Buddy 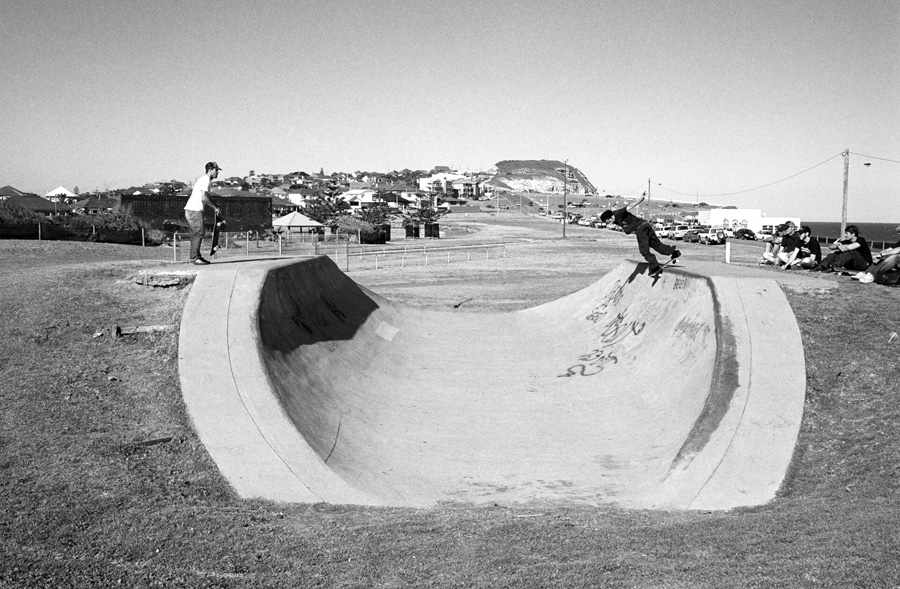 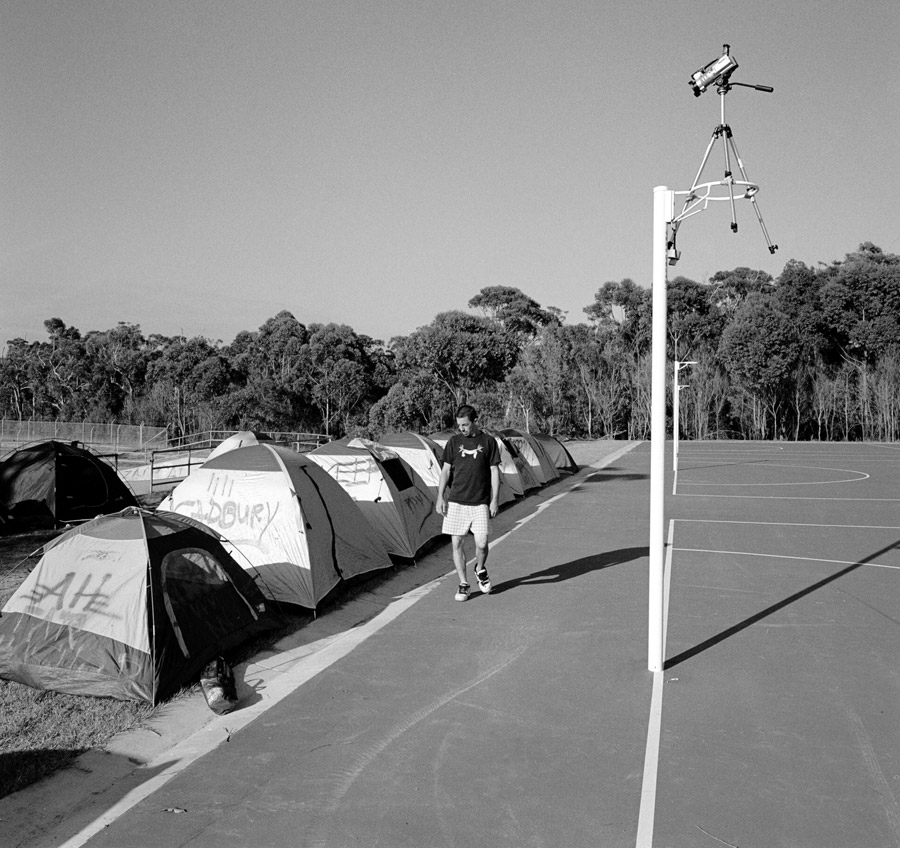 Every morning we’d wake up to a surprise because we’d always set up the tents in the dark. It wasn’t a camp, it was just a bunch of dummies in tents. – Rick 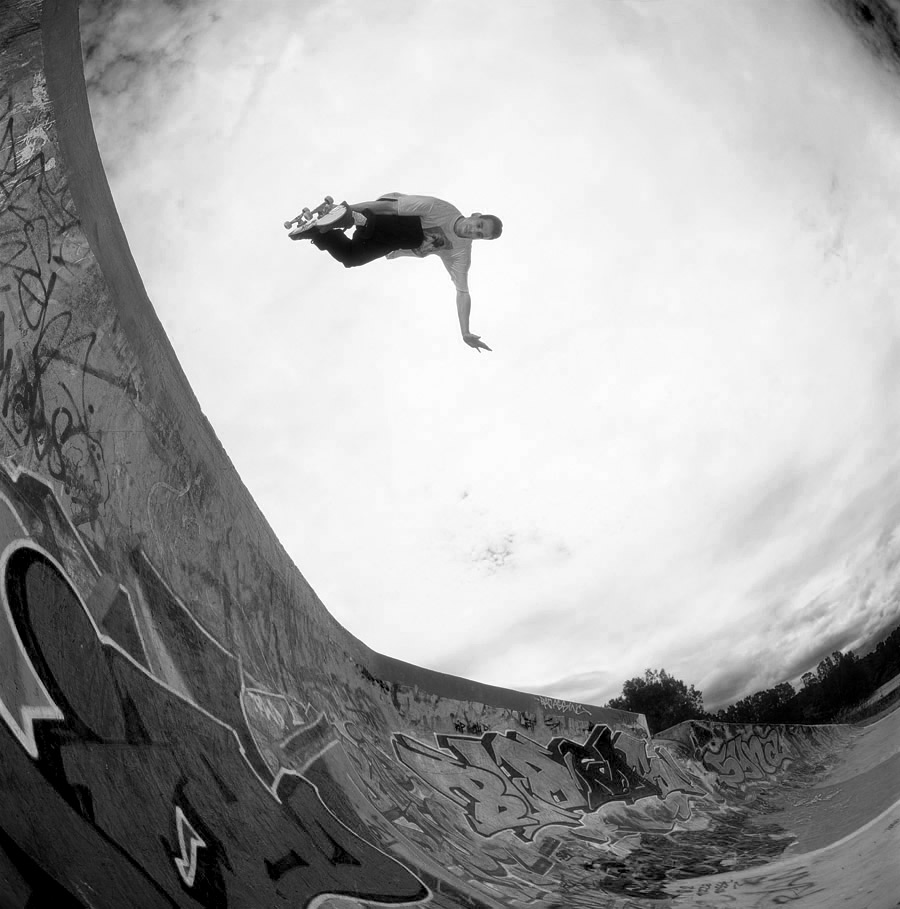 It had been raining for days and we were all going nuts. By the 3rd or 4th day the crew was ready to explode. If we didn’t get to skate soon, something bad was bound to happen. Luckily for us and for the Gold Coast, Hewitt’s rain dance to the skate gods worked and the rain stopped. Watching Hewitt, Cards, Bailey and the rest of the crew wind it up was amazing. Rick and I just made sure we had film in the cameras. We gave one to Frank and some of the shots that made it into the film were his. It’s still one of the most epic sessions I have ever been a part of. – Buddy 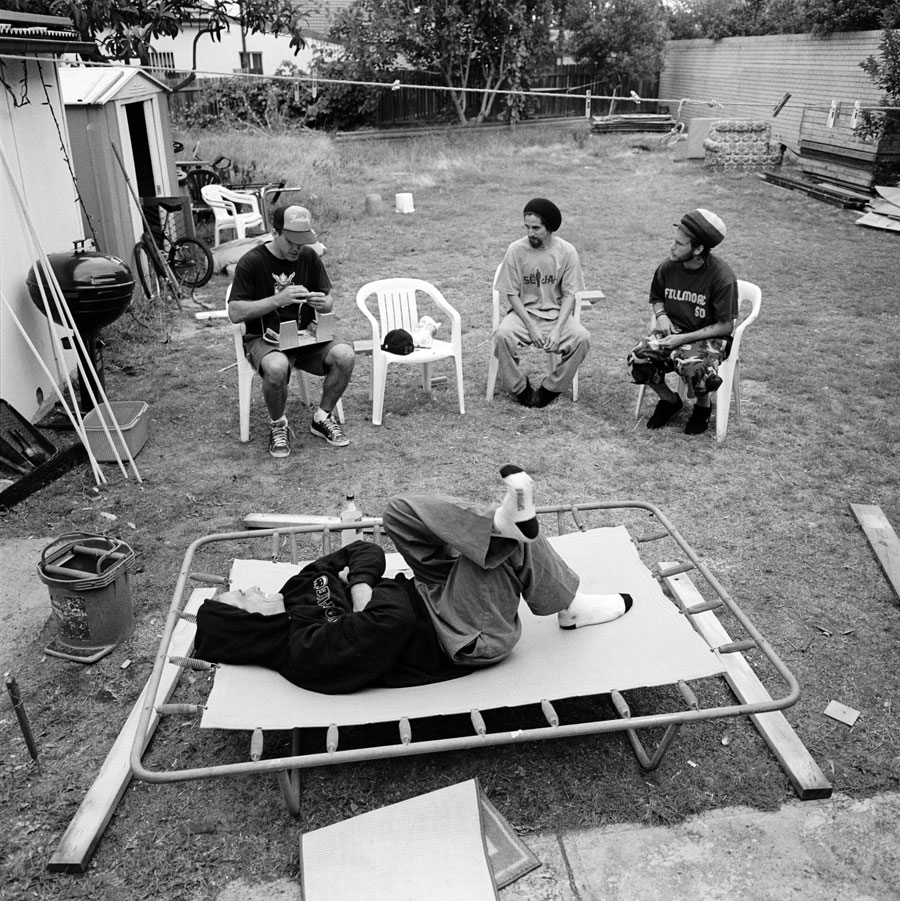 Cardiel and crew lounging in a backyard. 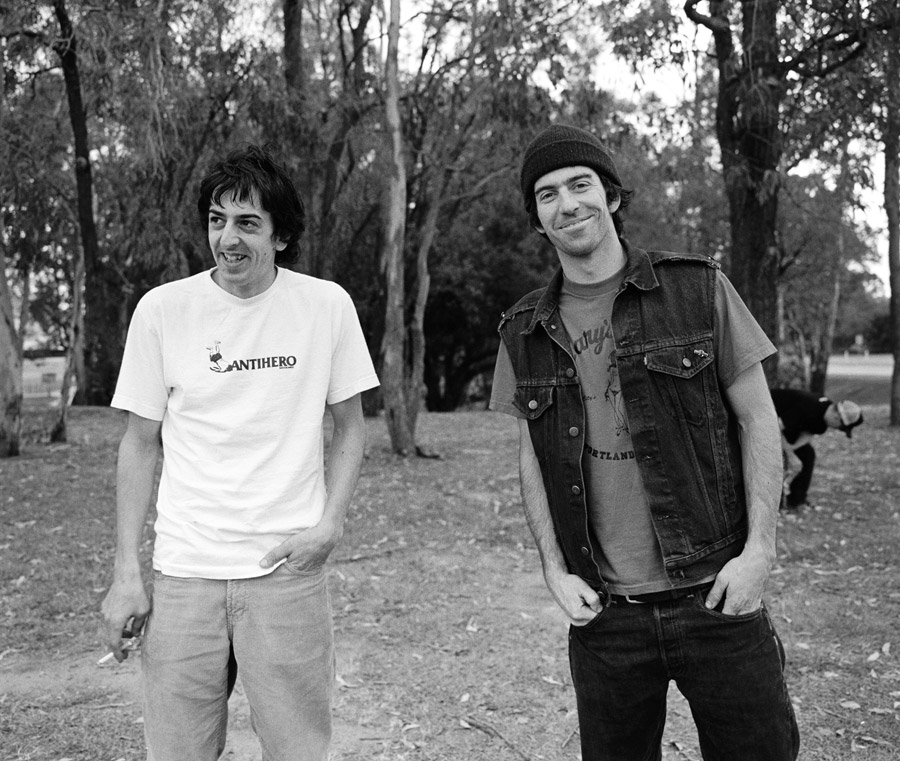 I was super stoked to go on this trip and get to hang out with all the guys and see what the crew was all about. These two weirdos made the trip so much fun (for totally different reasons). Max is the cool, mellow guy who can rip anything and is down to rap about whatever. Frank is funny as hell. He will make any session fun and in the van, the miles slide by while he is making everyone laugh. Super stoked I got to make friends with these two legends. – Buddy 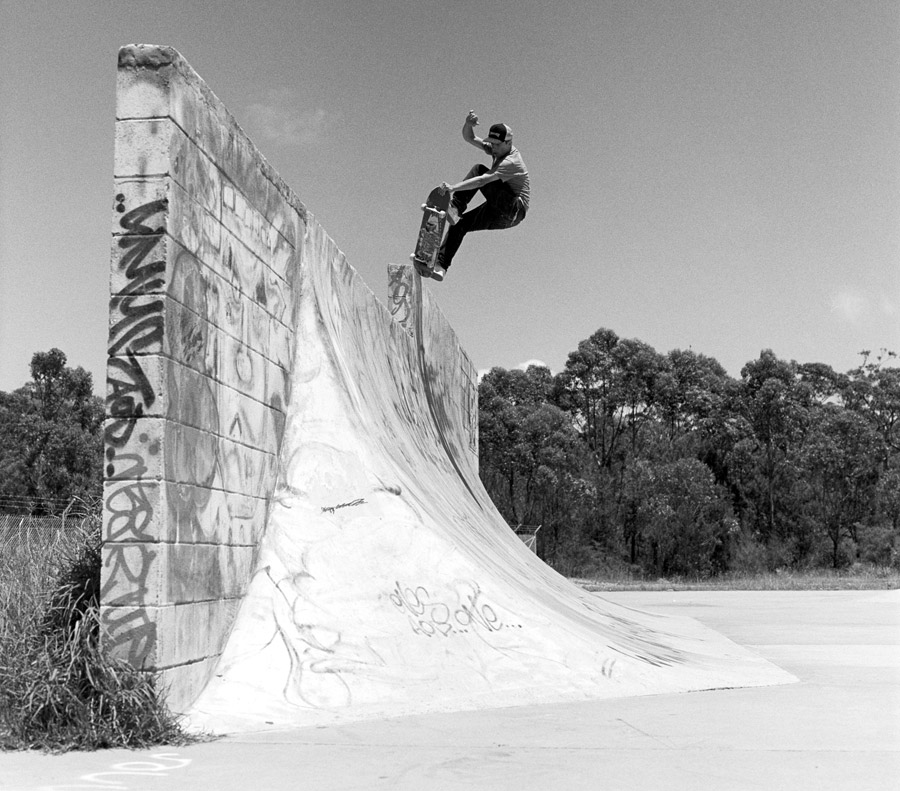 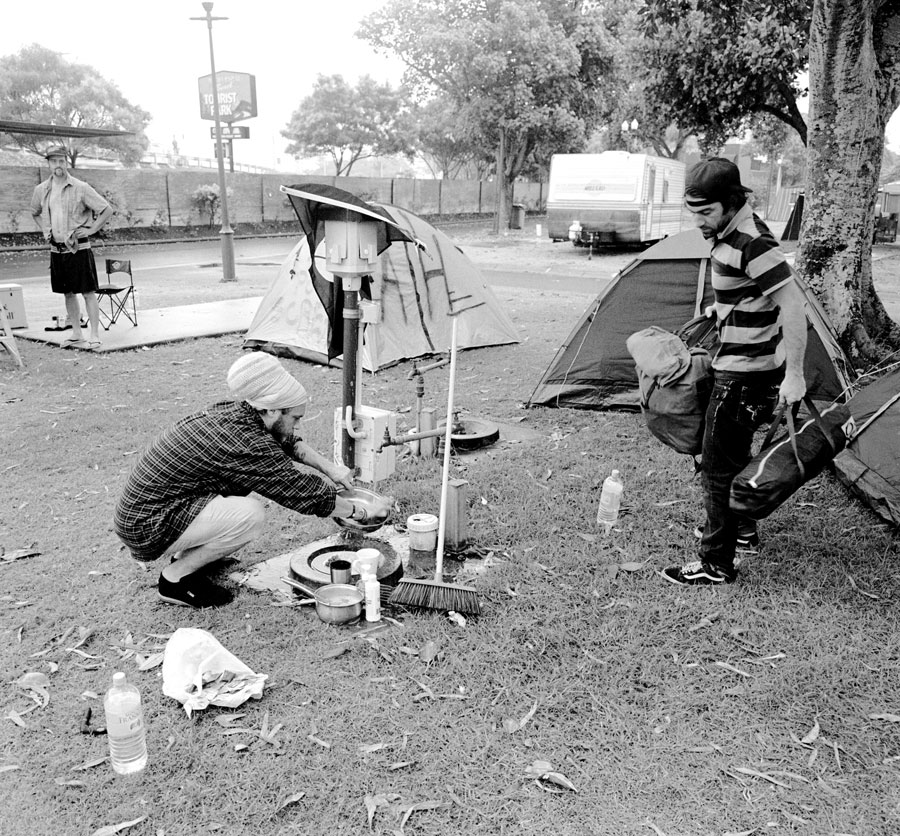 Joey always made for us some strange tea or ointment or food or tincture. He followed our tour van around in a camper van that always smelled like one or all of the above. – Rick 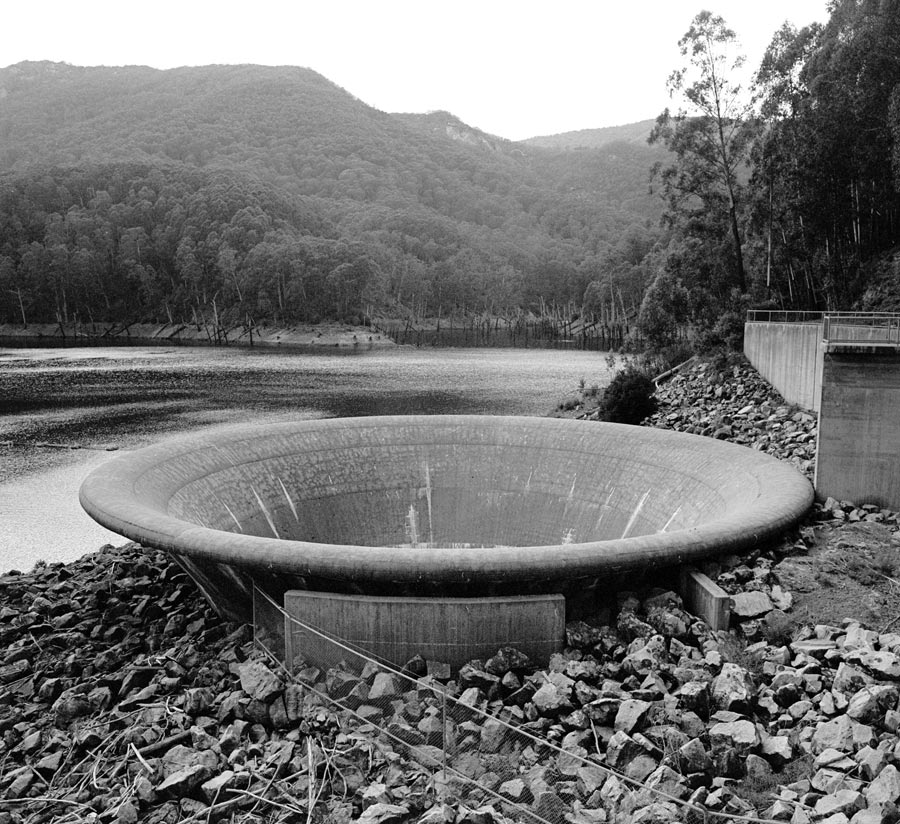 I think Hewitt sums it up best in the film: he says that the feeling of riding this pipe is like “being at the end of the earth” – if anyone got hurt bad (and that was definitely a possibility in a 34-foot pipe with an insanely steep roll in) it would not be fun getting them out – not to mention the 6 hours of bumpy dirt road back to the highway. The crew did not hold back. – Buddy 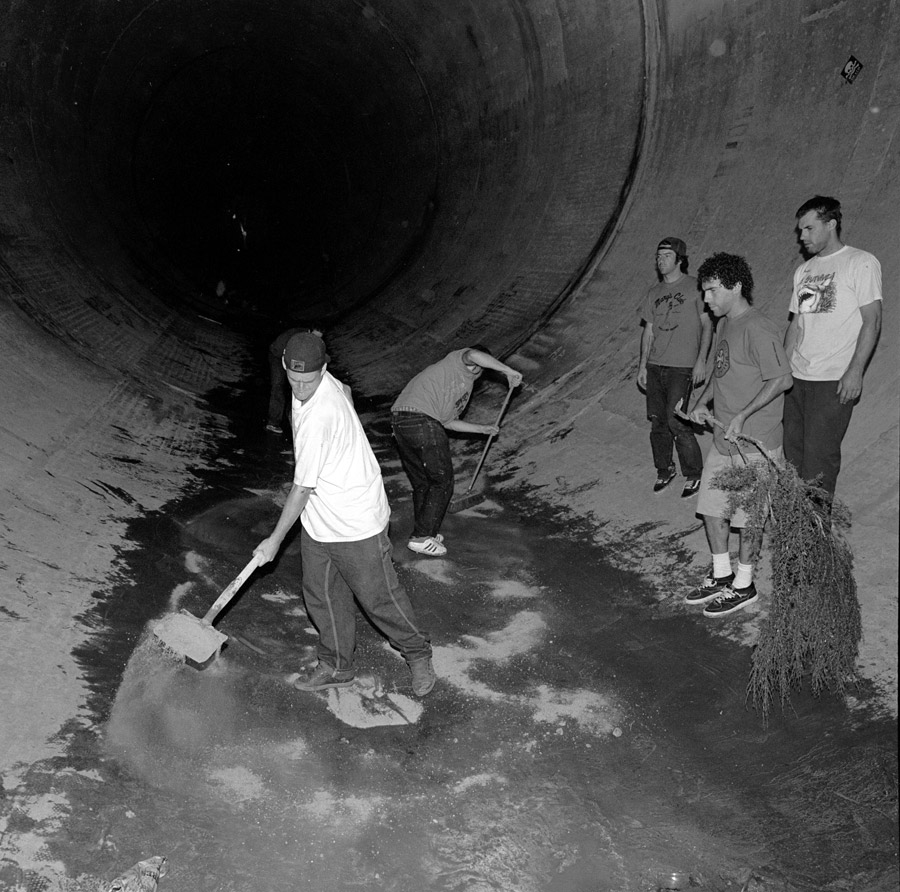 We drove for hours to get to this spot. I think Julien had it in his mind that this was going to be the big finish of the trip. He had heard stories from Phelps about the Snowy Mountain pipe and it sounded insane. It was so big it made my stomach turn just looking at it; it took us forever to clean it out. We still only had a fraction of the pipe to ride when we were done but when the skating started, there was absolute reckless abandon. Trujillo’s first frontside turns (the one in the poster and on the cover of the dvd) were possibly the gnarliest kickturns ever done. All this after Frank, Julien and Cardiel, en route to the pipe, did the craziest downhill bomb I have ever seen. – Buddy 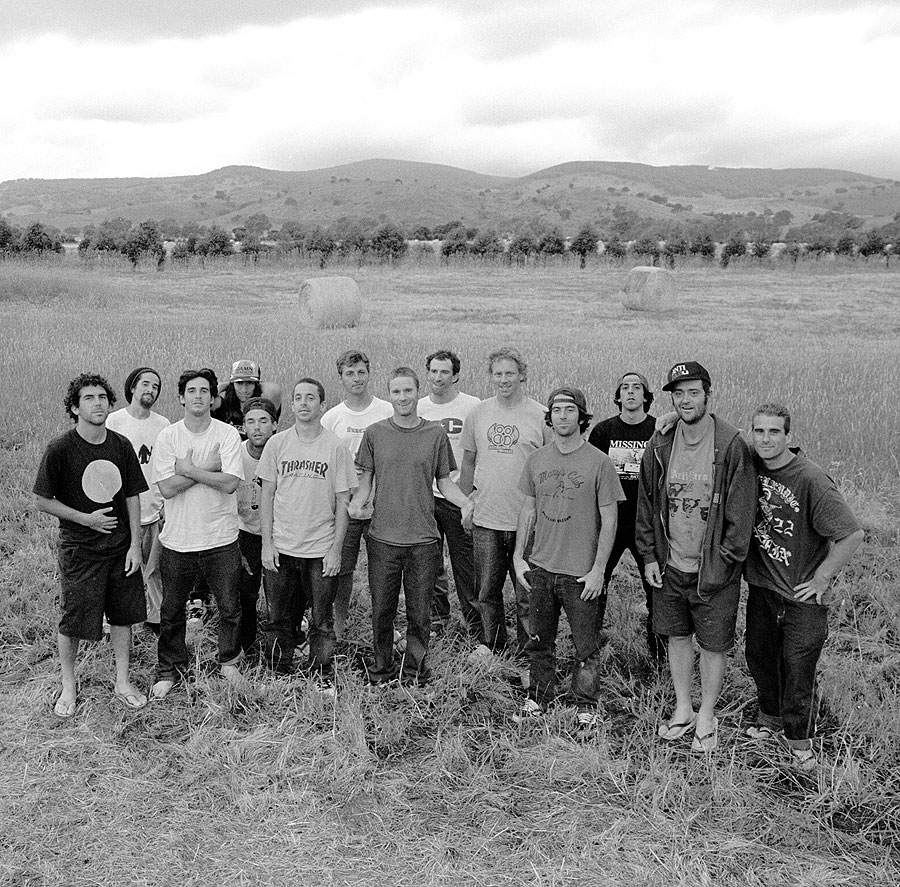 This was taken after the big pipe session on the drive down to Melbourne. Everyone was so stoked. We had just gotten out alive from the mouth of the beast and were in the middle of nowhere. For me, this was the point of the trip when I was thinking that we had a cool film on our hands. I was just stressing over whether the film had been exposed correctly. When shooting film you don’t get the celebratory footage review after the trick, everyone just has to take your word for it that you got some good shit. – Buddy 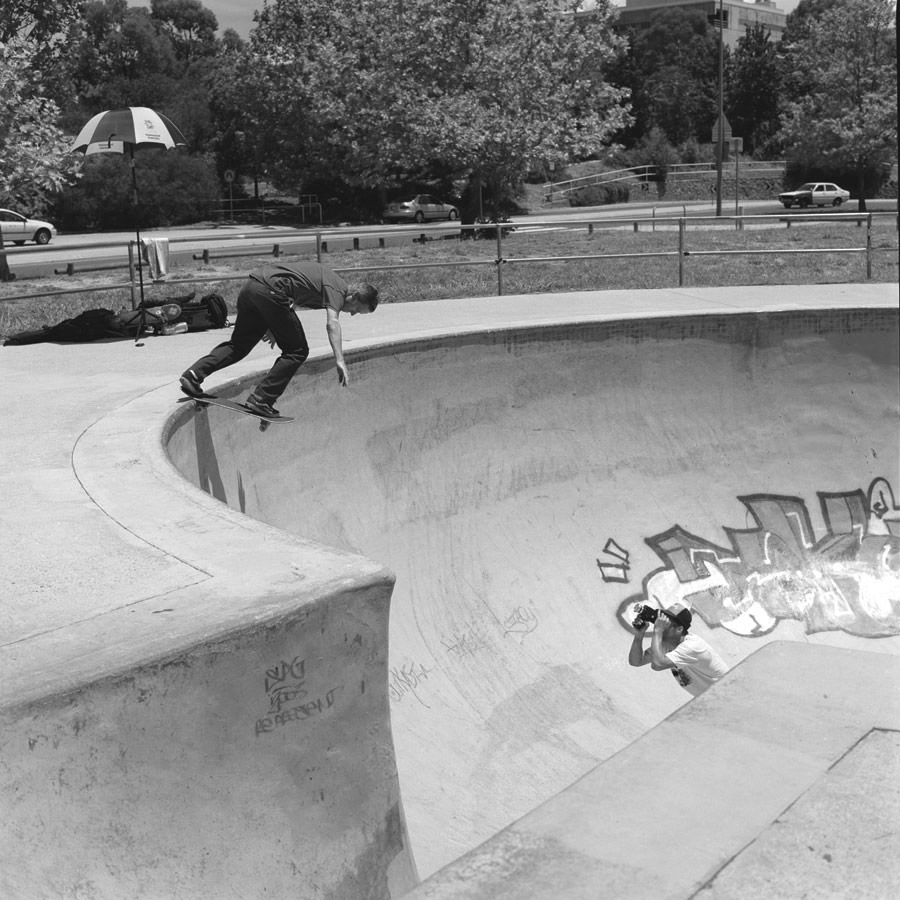 When we made the video, this trick was called “A backside Tailslide” and now it’s a “back tail”. All the wasted time we spent using those extra words. Lol. – Rick 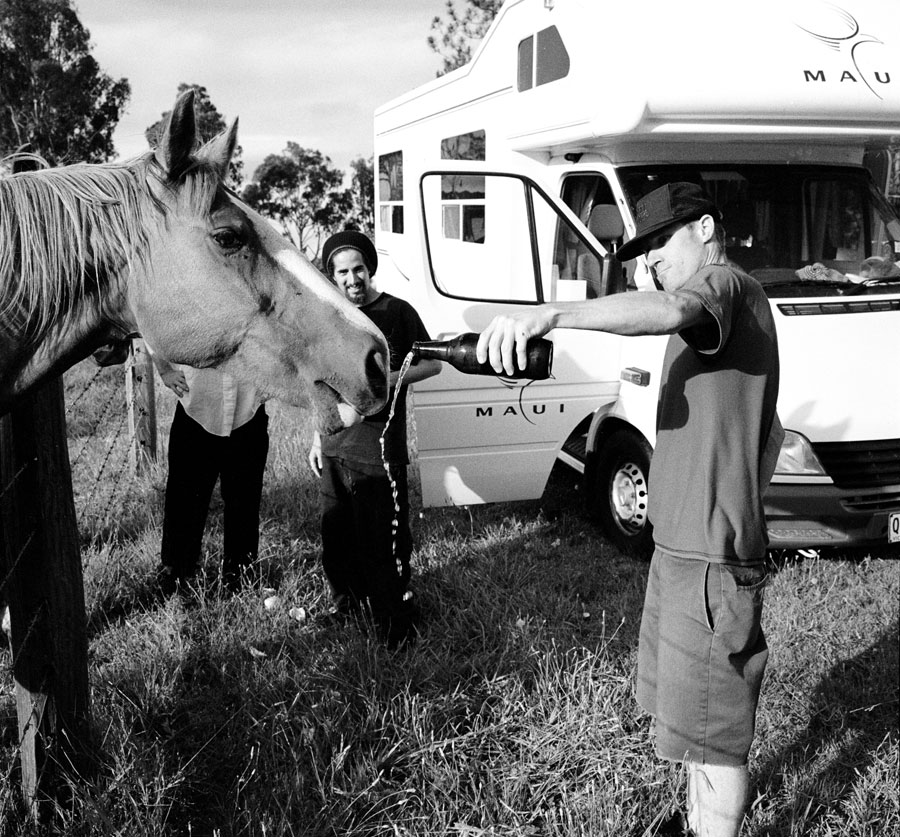 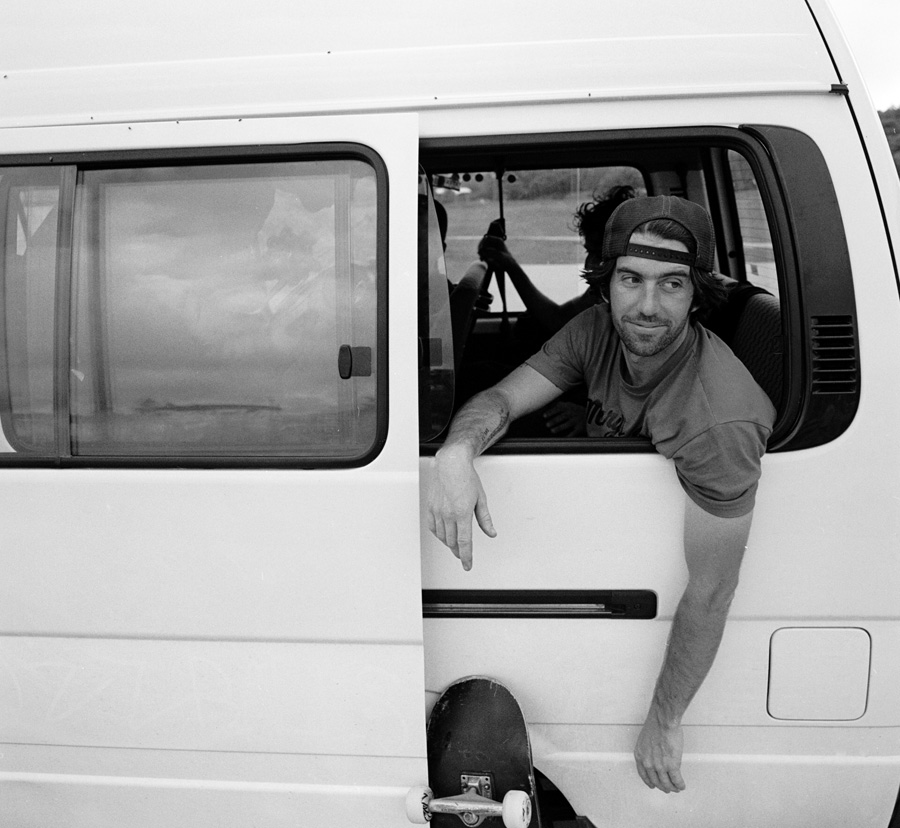 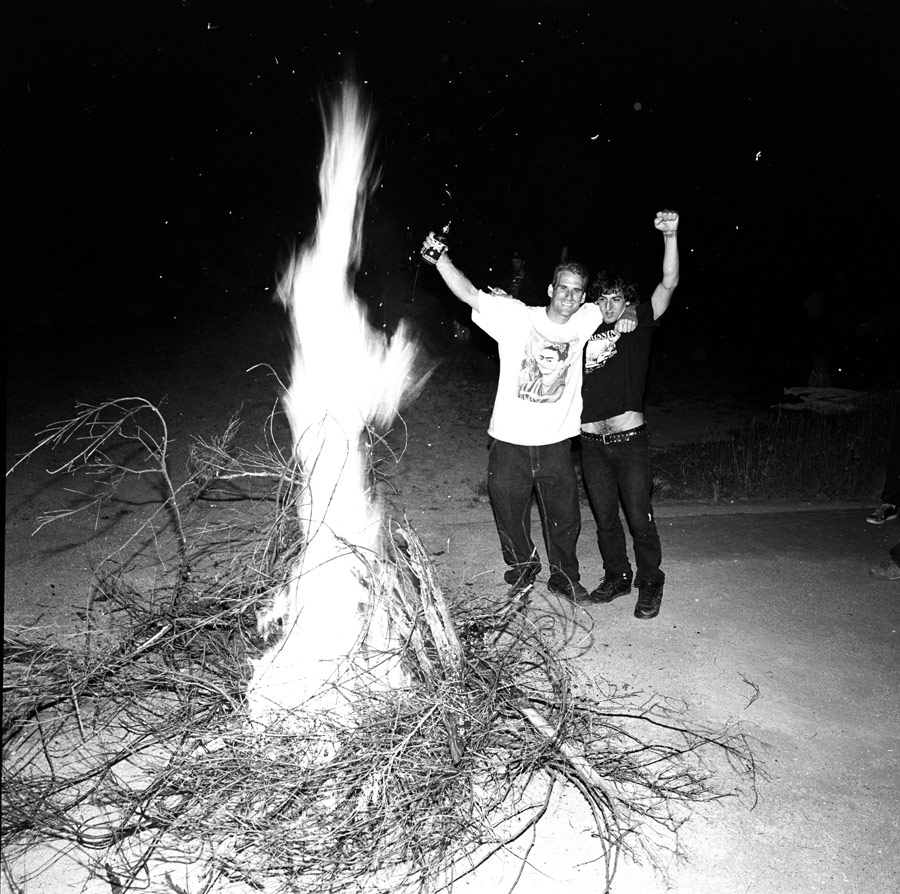 This photo is pretty self explanatory. The crew was stoked, happy to be skating, traveling and camping with the homies. This is pretty much the essence of what I think Julien wanted to convey with the video: go out on the road, the mission will be your reward. – Buddy

For more Tent City check out Antihero as well as the iTunes Re-release that just dropped with unreleased edits, audio commentary and a shit ton of extras.

Captions: Rick & Buddy [The filmers / editors / producers of Tent City]
Photos courtesy of Gabe Morford & the Antihero team
Free shit on our Facebook
Do not check out Instagram