When I pulled up to the premiere of Ruining Skateboarding in Brooklyn, I had no idea what to expect. I am so used to video premieres where a bunch of guys in baggy jeans, hoodies, and beanies stand around sizing each other up, not really saying anything to one another, and just awkwardly glance around. When I finally walked into the venue, though, I saw a much different crowd, where everyone was smiling ear to ear, hugging each other non-stop, and was visibly filled with joy.

Without exaggerating, it was truly unlike any other skate event I’ve been to before. It felt like the shift people talk about in skateboarding finally manifested itself in the form of this event, where queer people and young women rubbed elbows with the established “cool guys” of the scene, all there with the shared purpose of celebrating the release of this video.

After watching the full thing and seeing the credits roll by, I caught the name of Leo Bañuelos, who had a standout part and was credited with editing the video. I decided to hit him up to find out more about the process of putting together a video that brought out crowd after crowd for premieres (nine total!) and continues to push the boundaries of what skateboarding is all about in this new era.

What is the gayest thing about skating?
All the boys’ obsessions over all the other boys’ fits and styles and even just their personal lives. I just love how invested all these really hetero masc men are with other hetero men, but probably use the words “no homo.” It’s just ironic and silly. And gay [laughs].

When did There become a separate brand from Unity? How are they different?
I’d say it started in late 2021. We were always nagging Jeff about making a team. Jeff sent out texts to everyone who wanted to be a part of There and we just ran with it. A lot of people will know what Unity is but not know what There is and oftentimes I’m just like, “Well, they’re almost the same thing, but they’re a little different.” Same art, pretty much the same people, but the difference is Unity is more of a community effort. It’s inclusive, it’s for everyone, and there’s nothing to be branded about it or be capitalized off. It’s just pure love and community and support.

There is just the core skate team version that serves capitalism a little bit. I wouldn’t say that’s our intention, but we’ve got a team and we sell boards and we sell product.

So There is the straightforward traditional board brand and Unity is closer to like a nonprofit?
Yeah, that is a good way to put it. I guess Unity is for everyone, There is also for everybody, but we have a team [laughs]. 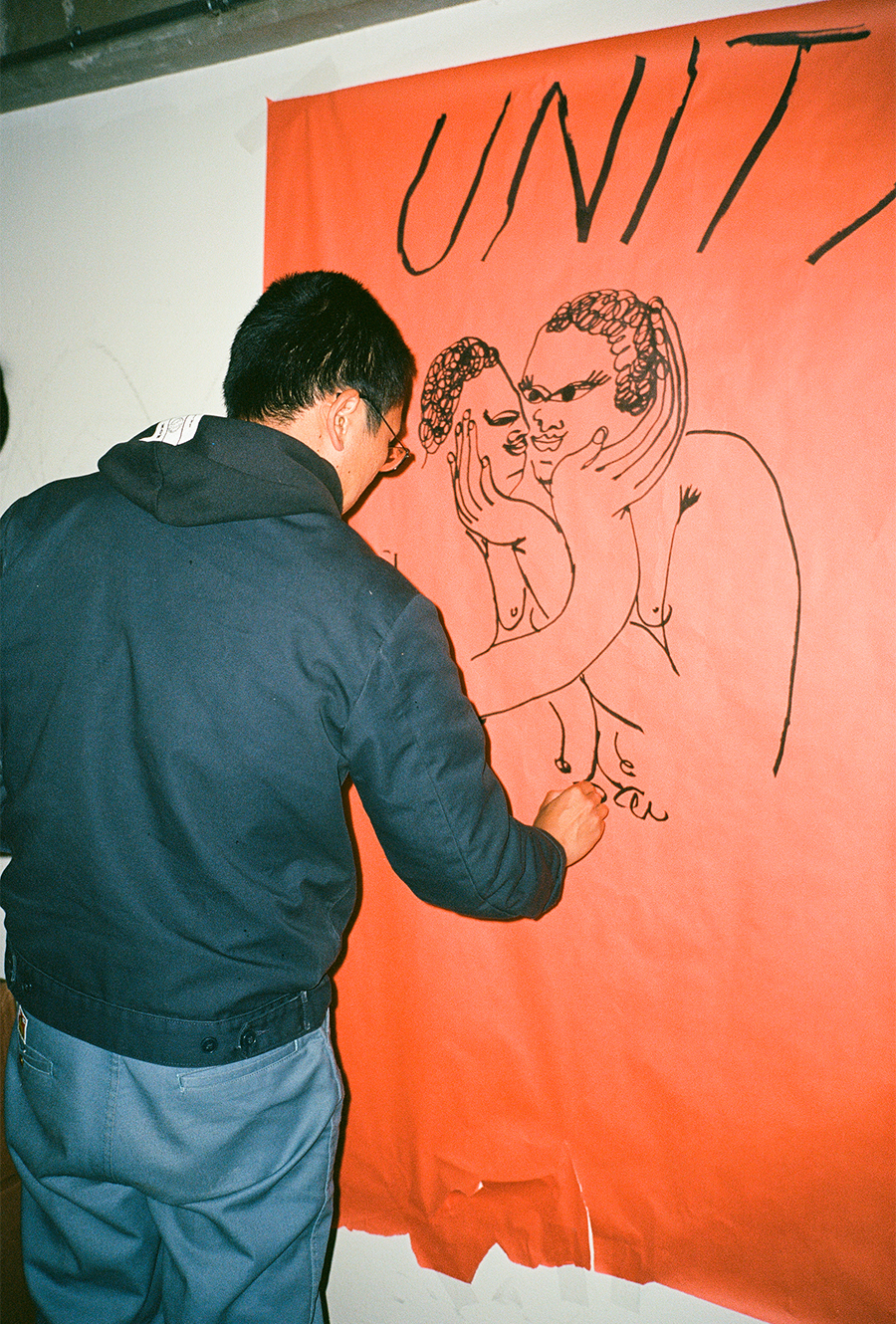 You guys are gonna be distributed under DLX distribution. At what point during filming did you all know that was locked in?
I want to say over a year, but I don’t think things were official just yet. It was just a lot of meetings and figuring things out. We’ve had to keep it hush-hush but have been really excited cause I think it’s gonna take a lot off of Jeff [Cheung] and Gabe [Ramirez]’s plates. DLX know what they’re doing, they have a legacy. Ashley and Jim are the MVPs over there. I’m excited to see where it goes. I’ve heard there are people at DLX who are not stoked on it [laughs].

That’s wack, fuck that.
Yeah, I’m just like, get over it. It is what it is. I haven’t really heard who, and truthfully, I don’t really care to know who, I just assume it’s like some randos or some jaded dudes holding onto some faded view of skateboarding. 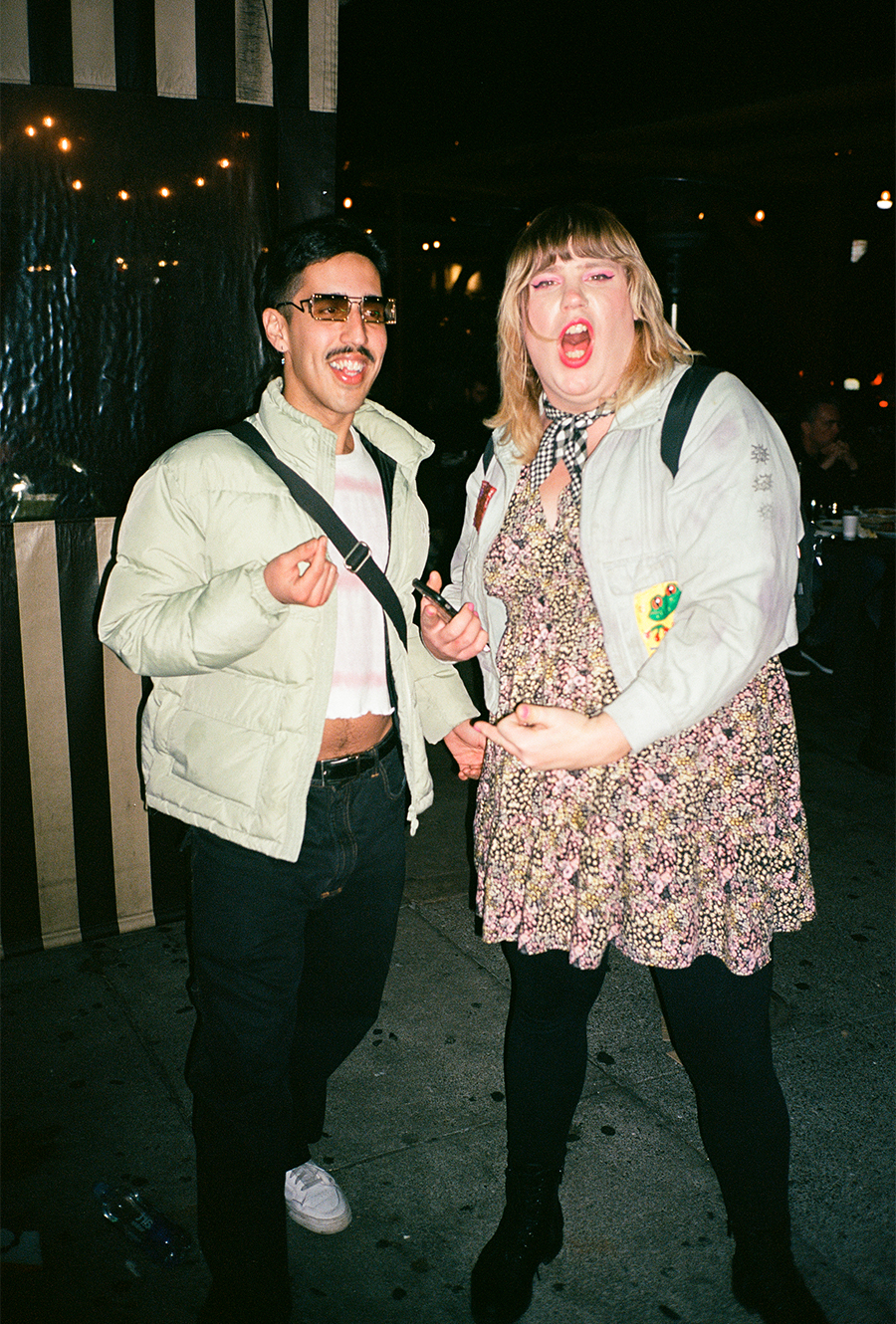 When you’re editing videos, is there anything that you need to have that gets you in the zone?
I used to think that I could only edit while I was high. When I was younger I used to make sure that I’d smoke and convince myself that the creative juices were flowing cause of said marijuana, but as I’ve gotten older I feel like sometimes I’ll smoke and I’ll just get so frazzled and it’ll just take me forever to do a menial task like. I go back and forth. I like to get high but sometimes I get too high and I don’t get anything done, but other times I get high, and it’s a beautiful, beautiful session.

Other than that I typically like to edit late at night. During the day, I look outside and if the sun is out it’s hard for me to be inside.

“I like to get high but sometimes I get too high and I don’t get anything done, but other times I get high, and it’s a beautiful, beautiful session.”

It seems like throughout the filming process of this video, people kept getting added to the team?
Yeah, I think Sam was added on. Then Myles was added on. They’re both great additions. We’ve got a fully stacked team.

Now we’re just waiting to see if me or Nadair gets kicked off first [laughs]. He’s in his 30s and he’s admittedly our only straight rider. I’m always like, “You gotta get outta here, straighty!” But he’s like a brother to me, I love him. He’s honestly got my favorite part in the video. He’s got the best fits. He’s our unassumingly straight rider. 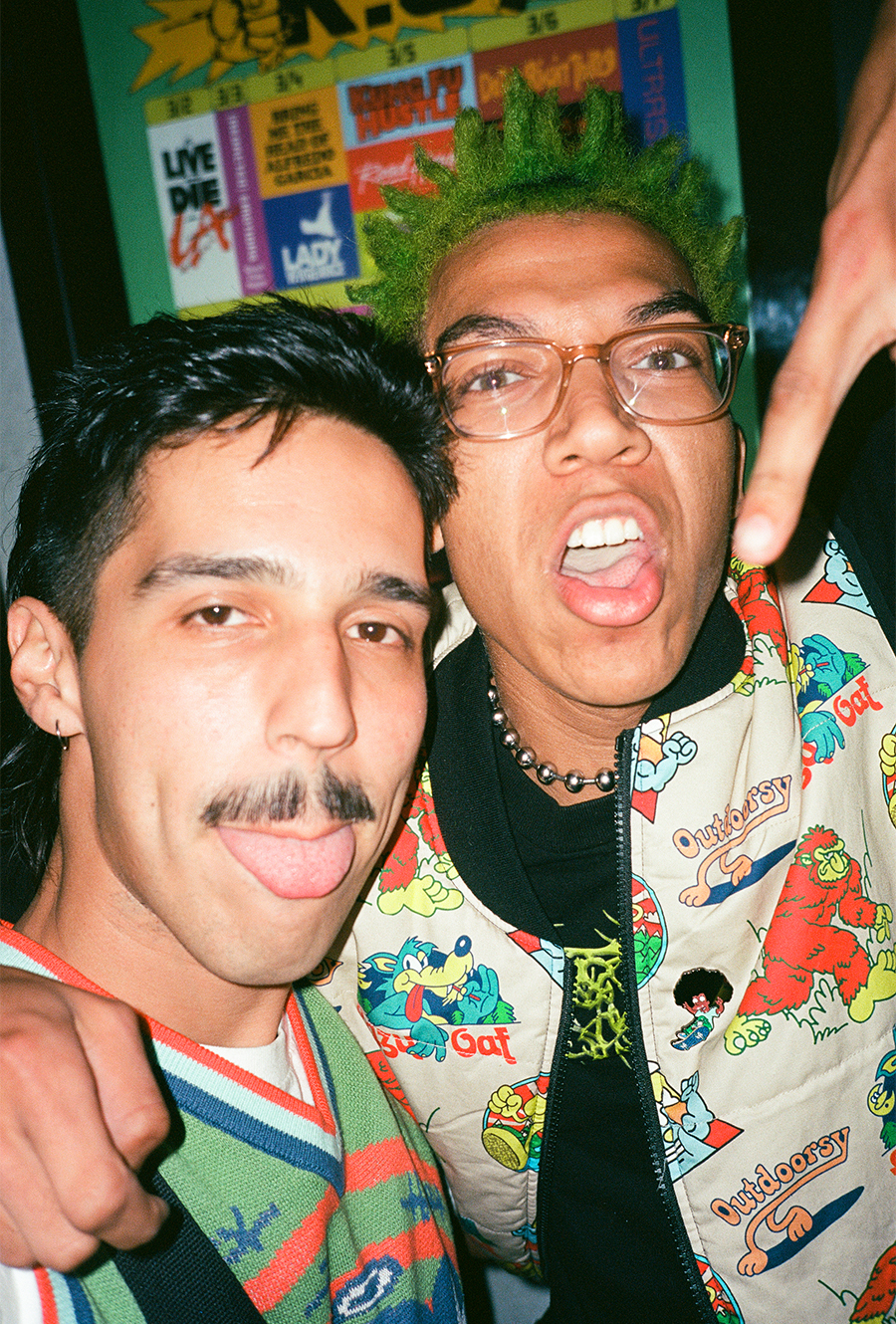 The music choices all felt like they matched well with the skaters’ personalities and their skating. Marbie and Chandler’s parts are two good examples. Did everyone get a say in their song?
Because it was There’s first full length, and for a lot of folks on the team, it was their first part, I really wanted to work with everyone on that. It was a little difficult at first because I wasn’t necessarily adapted to giving up that control. It was honestly refreshing.

Some of the folks didn’t necessarily have first choice songs and didn’t really know what they wanted to skate to, so I was sending them playlists that I thought would match and we would go back and forth and figure out what worked best for them.

I’ve had skaters in the past suggest that they skate to Lil Wayne and I was like, “Dude, we’re not doing that. Respect to him and his legacy but your skating does not match his music, his music does not match this video,” so I think a lot of times, filmers and editors do know better than the skater.

“I’ve had skaters in the past suggest that they skate to Lil Wayne and I was like, ‘Dude, we’re not doing that.'”

I felt like the vibe of the video reminded me of Logan Lara’s 917 videos in a way. Are there any people that you look to as inspirations for your editing?
I’m not really watching that many skate videos. In the past, I was always always a really big fan of Matt Creasy, he and his crew make the Threads videos. I was always a huge fan of their editing and the intimacy they created within those videos. I enjoy videos where you can just tell that everyone hangs out with each other, everyone enjoys each other, it’s not just them skating to skate together. They’re skating together because they actually like being around each other and love each other. I feel like if you can translate that into a video then you’ve got a perfect recipe for greatness.

Other people that I take influence from… I will say I do take a little influence from Logan Lara, Pontus Alv, Jacob Harris. I love the Atlantic Drift videos. I like the overall mood he creates with his videos and that general aesthetic that he has like the independent full-length he did, Eleventh Hour. 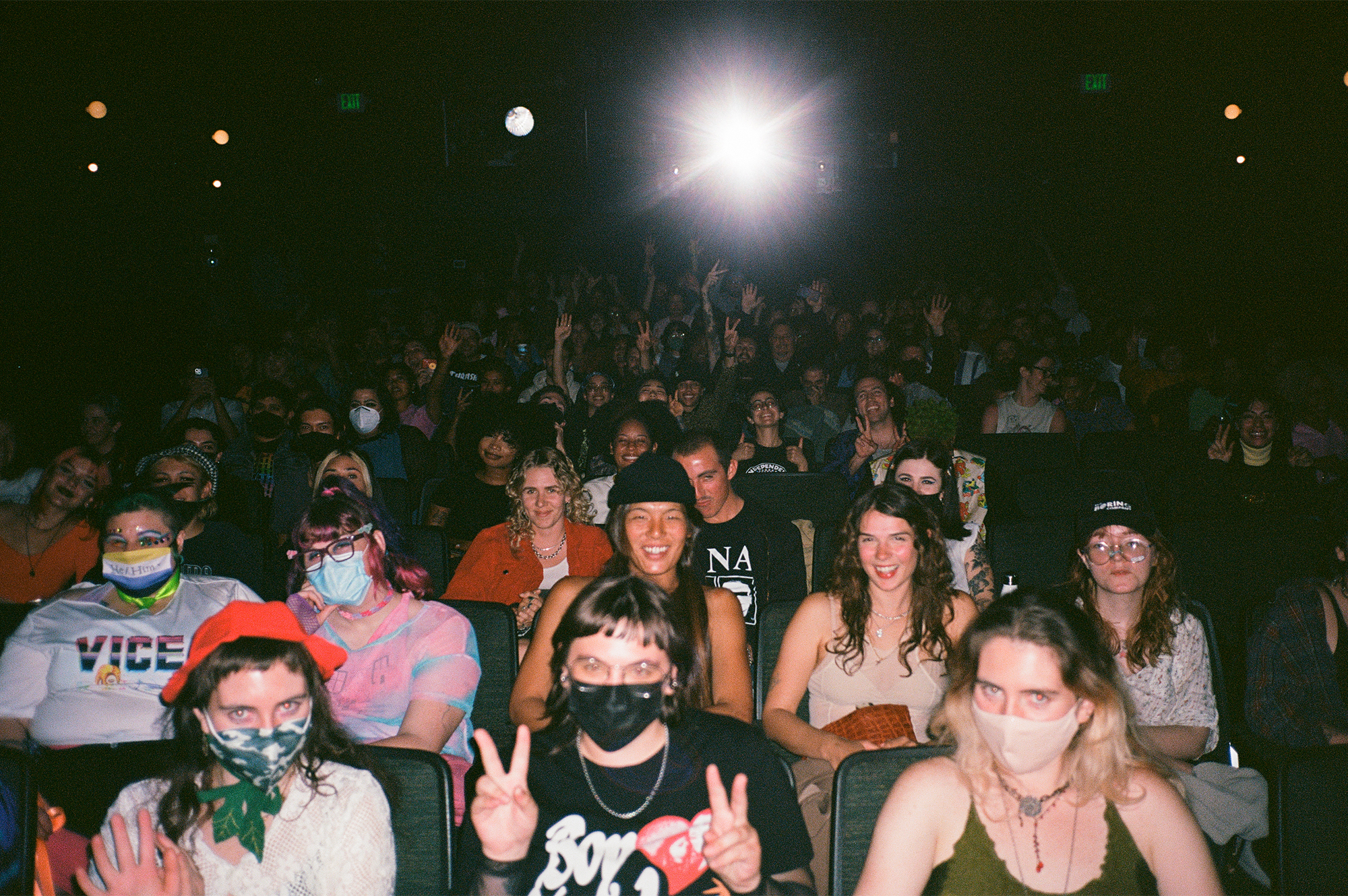 I think it just offers a different perspective on skateboarding. This is a video that 10 years ago—fucking five years ago—I would’ve never expected to ever happen, nor would I think it would be successful. Five or eight years ago, I’d probably be like, “There’s no way a queer skate team is gonna make a full-length video and it’s going to be received positively.” I’ve been proven damn wrong, so I’m pretty stoked about that.

Just hearing some of the younger queers’ responses to the video is so heartwarming. They were saying it was life-changing and even some of the older ones were like, “I wish I had this growing up. The trajectory of my life would have been changed forever if I had grown up watching this video instead of now,” so I’m grateful for that and I think we’re offering a brand new experience.

“If you think some queer skaters robbing you of a sponsorship, I can assure you they’re not. I’m sure your shit just isn’t that sick.”

Obviously, since we know how skaters can be, there are gonna be comments like, “Why would anyone back this?” What would be your response to that?
Traditionally skateboarders are accustomed to watching the hardest shit, the most difficult shit.

People fail to remember that skateboarders get stoked on whatever gets them stoked, that’s an individual experience that only you can hold. I think a lot of people need to understand that there are a lot of skateboarders in this world who have never seen anything like what we’re doing and have been looking for it. Those skateboarders don’t get stoked on watching the newest Thrasher edit or even some of the great skate videos that I like. There are so many skateboarders that do not enjoy that stuff or maybe can’t relate to it.

Oftentimes I hear people question why this girl is pro or why this person is getting this coverage or getting this amount of love, and at the end of the day, it’s because people are fucking stoked on them. If people like you and want to see more of you, you’re going to be supported and you entirely deserve that. I think a lot of skateboarders need to check in with that and remember that skateboarding isn’t just for them, and they need to be reminded that there’s a whole community who really wants to see this and it’s what gets them out and comfortable to be out and skateboard. And if you think some queer skaters robbing you of a sponsorship, I can assure you they’re not. I’m sure your shit just isn’t that sick. 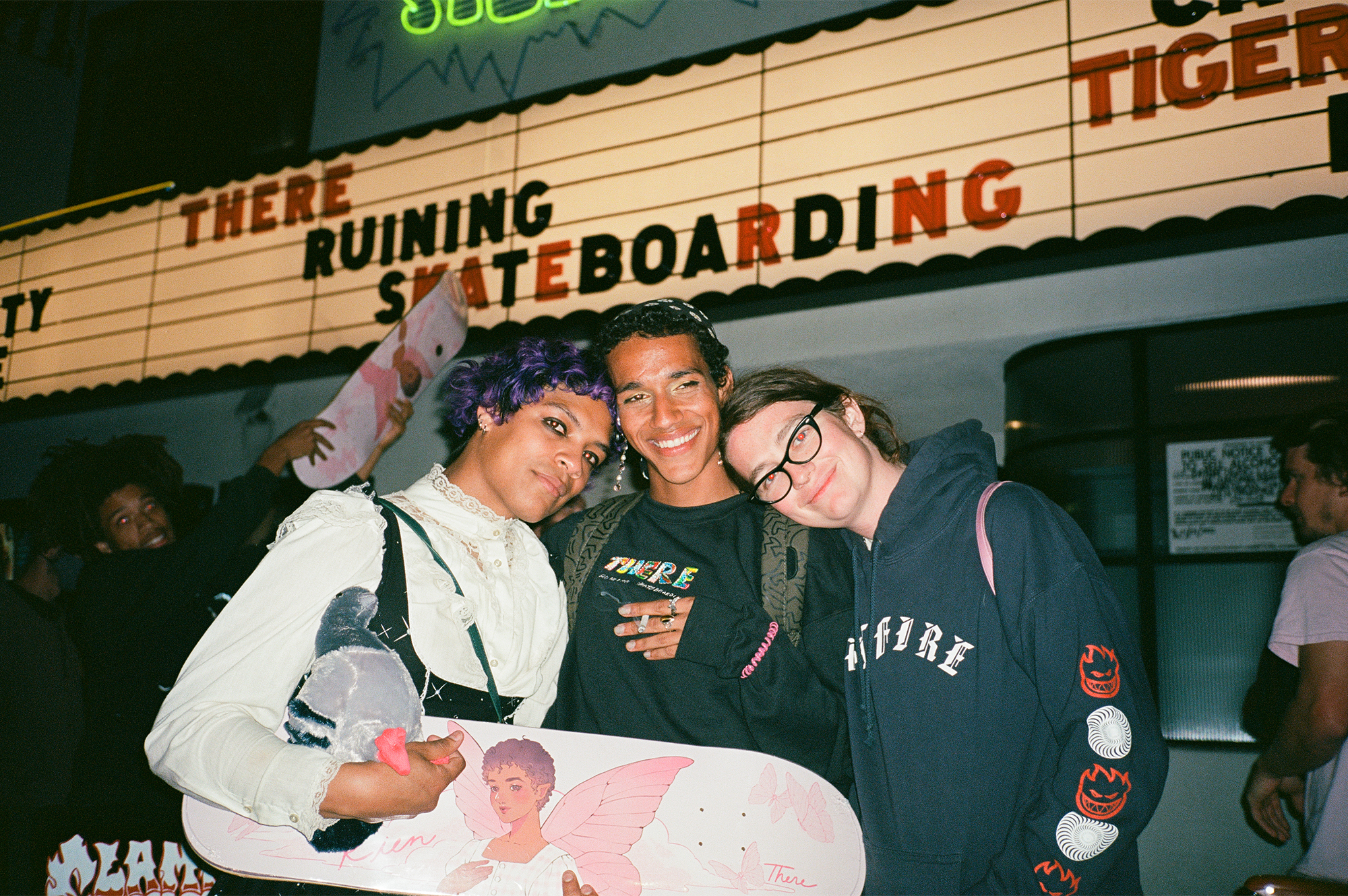 Something we’ve talked about at the office is the concept of gatekeeping in skating. Does skating sometimes need a little bit of gatekeeping?
I like to believe that everything needs a little bit of gatekeeping but also, while the gate is being kept, the idea of the gate being open is also there. If you can balance both without harming people, and if you want to share your honest opinion about things, as long as you operate with honesty and not cruelty, then I think a productive conversation could be had.

It’s hard to say cause I’m definitely guilty of being gatekeep-y of things in skateboarding or other facets of life, and at times I feel justified in that, but occasionally I am reminded of different perspectives that help me open that gate. If you wanna gatekeep, if you wanna hold your opinion, you’re entitled to that, but I think you should also have an open mind if you’re challenged at any time.

So it’s a two-way street. If you can criticize, you should be able to take criticism on your criticism?
Exactly. That’s something that I’m learning every day [laughs].