10 TRIPS YOU CAN TAKE FROM YOUR COUCH 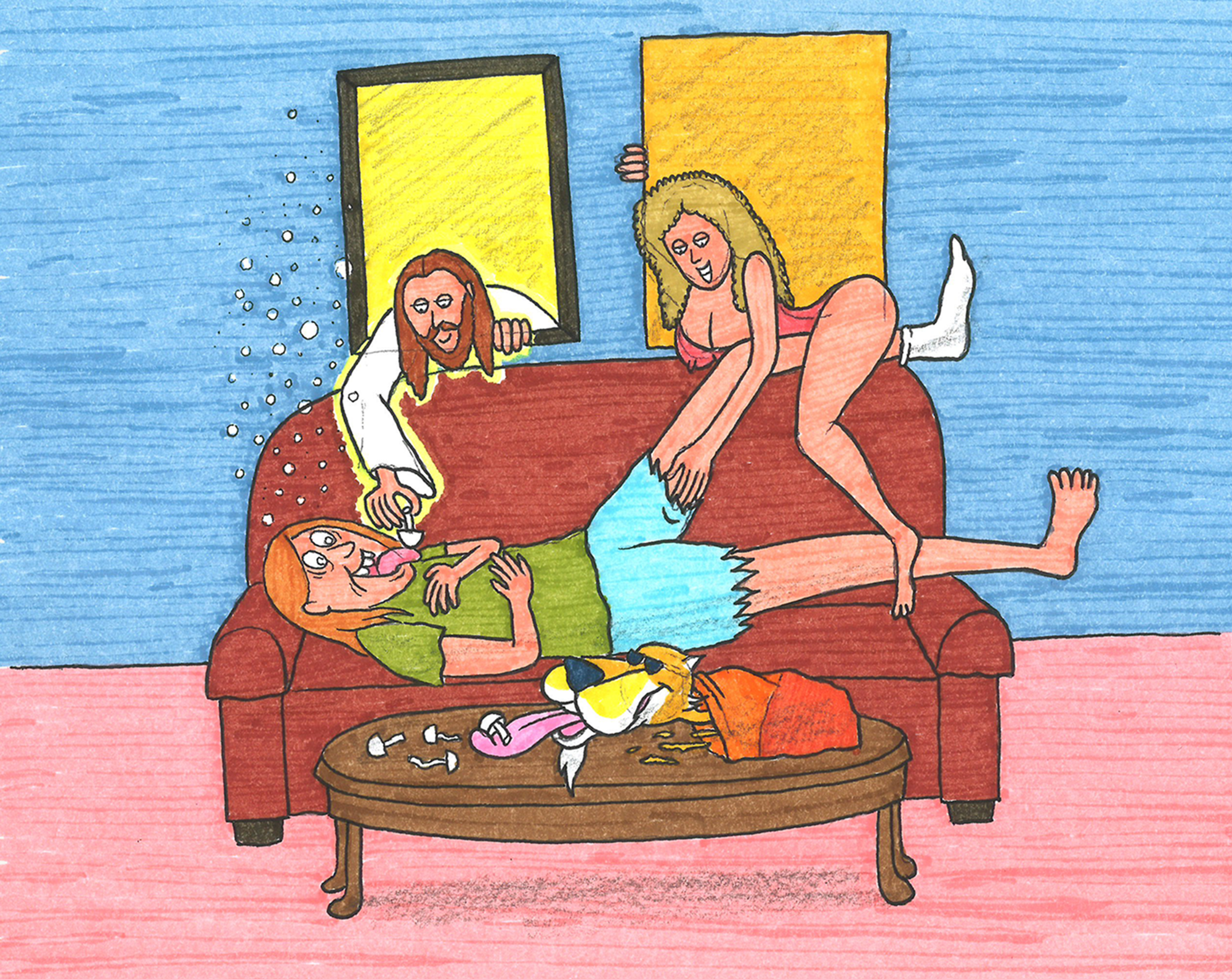 It’s been a full month and more since we’ve been in lockdown, and I don’t know about y’all, but I’m starting to go stir-crazy. Every minute of the 175,354 and counting I spend stuck inside my walk-in closet of an apartment is another minute spent stewing in my own solitary madness. I used to be able to cope with my anxiety by mobbing up with the crew for a long day of skating through the city followed by an even longer night of partying, but now that the city’s shutdown things just ain’t the same. Going out sucks, the streets may be empty but they’ve got no life in them either–it’s super depressing. I don’t even want to go skate anywhere because my clumsy-ass is liable to break something and wind up in an already overburdened hospital. So I’m stuck inside but want to take a trip, what’s there to do?

Plenty! Don’t believe me? Well, fuck off, here’s a list of ten trips you can try right now without ever even having to leave your house…

SHROOMS
Let’s go ahead and get this one out of the way because it’s the most obvious (but also depends on having easy access to moist morning cow fields or markets the government hasn’t quite classified as ‘essential services’)–eat some magic mushrooms. The favored trip of Aztec priests and Ryan Reyes alike, psilocybin mushrooms have been used to escape the confines of our conditioning for over 6,000 years. Whether it comes freshly plucked from a pad of cow dung or a sterilized lab, you can eat a little bit of these and finally get what the fuck Grimplestix is supposed to be. Watch out that you don’t venture too deep into the wavy world-on-shrooms though; you might wind up naked on a roof, rapping who-knows-what as your skate career careens down the drain.

SENSORY DEPRIVATION
The other day, after trying out the above trip, I got to thinking: The world that we know and everything in it is actually just our interpreted reality, a bad translation of all the bazillion bits of sensory input we receive every instant. Over time, our conception of the world starts to harden and becomes limited. It’s like having Welcome to Hell but only being able to watch the slam section – fun for a while, but it gets old quick. One way to break out of that prison is to cut your senses off from everything and let your brain go wild filling in the blanks. You and your roommate could team up your stimulus check and splurge on one of these sensory deprivation tanks, or you could rig one up yourself like a pro, or go grom with halved ping-pong balls over the eyes and the radio set to soft static. 15-minutes into your trip to total nothingness and you’ll be envisioning things more original than Matt Tomasello’s skating.

NUTMEG
This one’s a trip straight back to middle school when a schoolyard rumor would have you raiding your grandmomma’s spice rack for whatever it was Jimmy said would get you high. Nutmeg, as it turns out, actually occasionally works on some folks if you take the right dosage, and offers an all-day experience that’ll leave you both extremely nauseous and with a newfound knowledge of the liminal space between waking and dreaming. It’s kind of like spending a day living in the trippy Tom Penny section of Sorry, only without having any of his skate talent. The effects of this spice last for a couple of days, with the second one having you as achy as if you’d skated 700 miles on 101A wheels. But at least you’ll feel like you actually took a trip, which is something I guess.

FASTING
After ingesting all that nauseating nutmeg, you might not want to eat for a while. This is perfect since this next way to trip actually demands that you not ingest any sustenance for at least four days. Without any indulgences besides water, lemon juice, herbal teas, and salt, your body will begin to detoxify, pushing out all the alcohol and quarter snacks you’ve surely consumed at a dangerous rate during your quarantine. After a few days you’ll break through to the other side, and your body will be tripping on its own energy reserves just to keep you moving. Some Native American tribes use fasting as a sacramental orientation to a vision quest, where a young soul will seek out their connection to the supreme being. So maybe fasting will help you find Animal Chin? It’ll definitely help you get that ideal sk8er boi body shape: baby bird chest teetering atop two twig legs.

BREATH CONTROL
After a week or so of fasting, you’ll probably be so hungry you’ll be trying to eat the air. One of the first things you’ll learn is that you are not, in fact, a sponge, and your ability to survive all depends on breath control. Fortunately, it’s easy, and if you master it you’ll be able to pretty wild trips just by focusing on the in-and-out cycles. Take a series of deep breaths to slam your brain with oxygen and then hold your breath for as long as possible, before taking another series of deep breaths and doing it all again. After a few minutes of this, you’ll get something euphoric like a runner’s high or that fluttering feeling you get after landing something way out of your gnar-limits. With enough practice, you can even achieve a dissociative effect where you feel removed from your body. Finally free from your corporeal form, you’ll no longer have to fear shinners or hot pockets, and can flex your mighty healthy mind.

DRUMMING
Finding your rhythm is the key to unlocking the limitless freedom that breath control exercises have to offer, but, if you get bored of just sitting there staring at the wall, you can take that newly found groove and ride it to the other side through shamanic drumming. You can enter a trancelike state through engaging in certain patterns of tactile beat-making, just use your fingers, a couple of tech decks, or, for an added arm workout, two mall-grabbed skateboards, and get to jamming. Let yourself fall into the rhythm and before you know it you’ll be vibing as loose as Matt Rodriguez, or at least as loose as the guy that runs Element, “you just have to get started.”

VIRTUAL REALITY
If you’re quarantined with someone who is also trying to take these trips, it might get pretty maddening when they’re stuck on the shamanic drumming one and can’t even paradiddle. One way to escape from this noisy reality is to take a trip to a virtual one. There are all kinds of headsets you can use to get you there, and there’s this weird app the very-not-evil corporation of Google has worked up that’s supposed to mimic the experience of hallucinating. Deep Dream was initially created to give engineers an idea of what neural networks (computer brains) see when they process a static image. Delving into the Deep Dream stream is like leaving the human world behind for another one, even as the ghosts of what you know haunt everything you see before you. This is what I imagine it’s like when Lizard King closes his eyes at night.

RELIGION
Have you ever met anybody that’s super religious? They’re a real trip, so completely convinced of their own faith that they just let their fate fall into the hands of whatever deity it is that they’ve been told is the right and only one. Honestly, it must be kind of nice to relinquish control to a Higher Power, especially if (despite all the hardships of living) you feel it’s benevolent and caring. Devotion is such a gnarly trip that it can have you talking in tongues or taking up arms to strike down any non-believers. A lot of skaters start getting into Christianity as they get older, but there are lots of religions to choose from, and all of them offer their own journey. (Some people even say the skateboarding is its own kind of religion, but unless you’ve got a skatepark at your house you should probably refrain from worshipping that god too much lest you fuck around and spread the virus to the still-living patron saints of skate.)

DEATH
Death, the oldest trip in the book, one that people have been taking since the first dude stopped living. It’s also the ultimate one, the last one the you-as-you-know-you will ever get to take. Since no one ever makes the trip back there’s no real tellin’ about what the final destination looks like, but those that have studied people who have come back from near-death experiences say it feels kind of like taking DMT – a flash of memories, bright neon lights, a fearful sense of infinity giving the whole journey a celestial glow. It sounds pretty cool, and not knowing the ending makes it seem pretty exciting. But there’s no need to rush it. It’s a trip we’re all going to go on eventually, so save it for last and take as many other trips as you can in the meantime.

Dumbass disclaimer: Legally, I don’t think we’re allowed to actually advocate that you take any of these trips. And if you do decide to follow any of the below recommendations, you are liable for wherever it is that you end up. Act for yourself, sheeple!