WE TRIED TO REVIEW EVERY SKATEBOARDING GAME ON PLAYSTATION 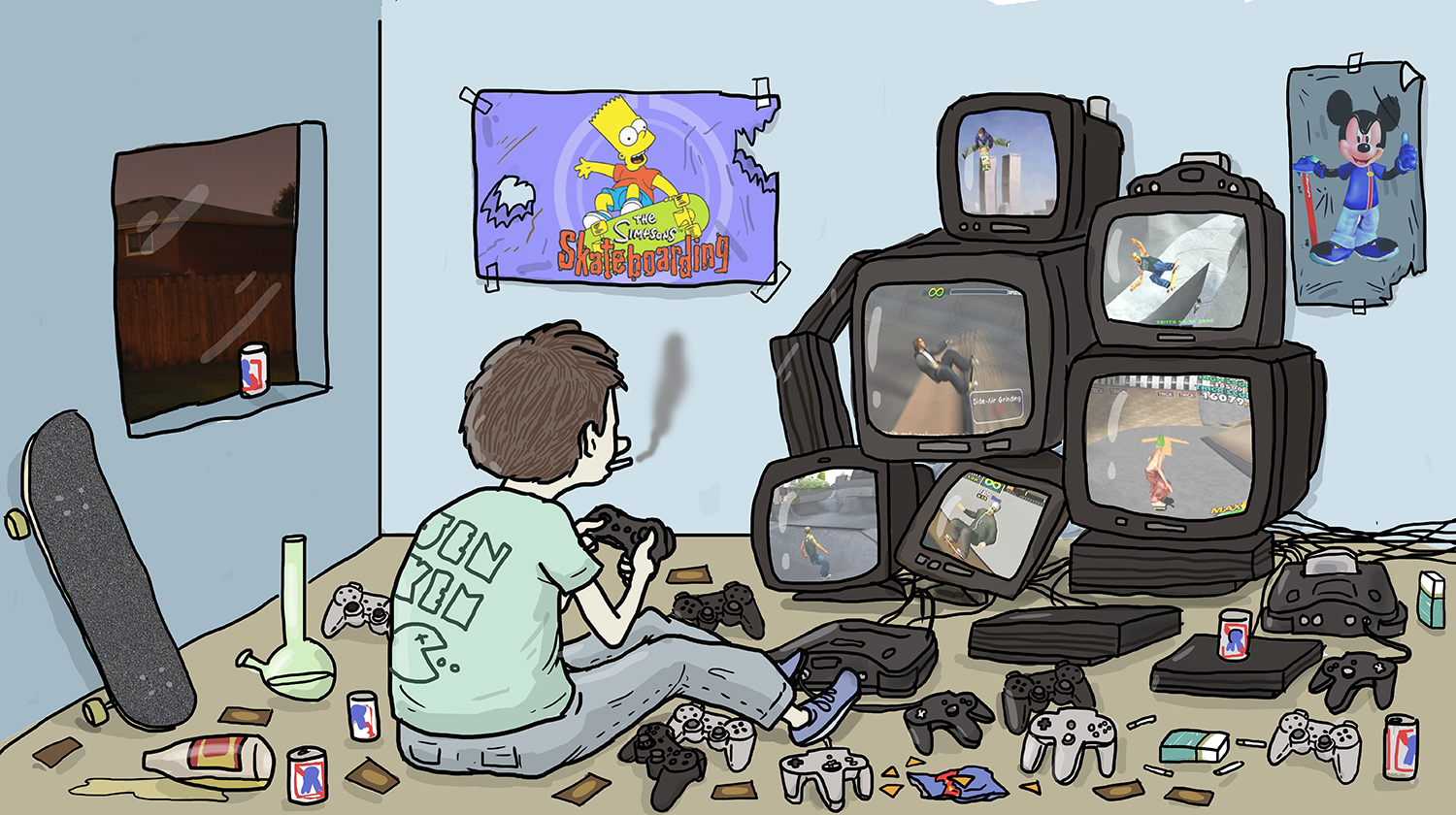 The Tony Hawk series is often romanticized and referenced in casual skate conversation, but the Hawk man wasn’t the only one trying to spread the gnar into the nerd world back in the 2000s. There were a dozen other greedy game developers trying to tap into that THPS money once it became a record breaking hit. Of course, nobody that took skateboarding seriously ever played them, because there really was no reason to own any other skateboarding game except Tony’s. Most of these games were just ripoffs that ended up in the dollar bin rack at your local GameStop, or at garage sales across the world. Out of sheer boredom, we did some digging for these long-lost and forgotten Playstation titles so you won’t have to torture yourself to find out if they’re worth your time.

Sure, the controls in Thrasher were a little funky to get used to, but if you put in some time, you will realize this was technically the best skateboarding game of its time (besides THPS). It was the first to illustrate the professional life of a skateboarder, coming from nothing, traveling the world, picking up sponsors until eventually going pro and becoming SOTY. Not only do you get to choose your own sponsors (from a strangely modern selection including Supreme, Anti Hero and Converse), but the spots that are featured are some of the most iconic in street skating’s history.

Gameplay wise, it’s the spiritual predecessor of EA’s skate., emphasizing trick selection and variety. When your time is up on each level, instead of going straight to game over, you are challenged by some form of skate harassment. In most levels it’s a cop with a taser, but in Venice Beach you’re attacked by a mugger, and in the hills of SF you’re chased by a rabid dog. Tricks are worth extra during chases and it always feels good to back tail into the distance as the cop spews one liners at you.

The big “innovation” in Evolution Skateboarding is the addition of boss battle levels. Yep, you heard that right: To beat the game you have to battle a giant tarantula in a castle and an evil semi-truck… Yo Konami, pass the crack! If you can get through this fantasy nerd nightmare, you unlock various characters from other Konami games like Solid Snake and “Vampire Killer” from Castlevania. Despite me wanting to like this game, I found myself popping this one out more than putting it in (giggidy).

This one plays like a shittier version of that weird arcade game Top Skater. Remember that clunky thing? It’s more of a racing game with trick points added as a bonus. There are some real tricks featured here, but not without the inclusion of such goofs as “Iguana Grabs” and double backflips. Most of the levels resemble real places in name only. San Francisco looks just like the game Crazy Taxi, but way shittier. If you aren’t playing this game for nostalgic reasons, I don’t know why you would be playing it at all.

Ah, now we come to this weird crock of shit. Andy Mac graces the cover, almost immediately signifying that this will not be good. Advertising multiple gameplay modes, a great soundtrack and hundreds of tricks, let me be the first to tell you that the gameplay is actually fucked, like a demented THPS. To perform tricks you have to punch the buttons in such a delayed mess that it ends up making no sense what is going on. Playing this game makes me wonder how they got Sal Barbier, Huf, Scott Johnston and Rick Howard on board. Shoulda known better than to buy this when you read the phrase on the back, “How does 540 benihana to one-footed backside smith grind sound?”

Grind Session was a happy medium between Thrasher and THPS. This game featured an impressive but somewhat eclectic lineup of pros, from the one and only Cardiel to Willy Santos. Pigpen and Cara-Beth Burnside are also featured in the game. The Tempster appears and it’s fun to skate Slam City Jam and throw down a few of his patented impossibles.

The game’s strange physics fall somewhere between aggravating and hilarious. There is a secret mansion that is unlocked one room at a time by completing all goals in a chosen level, but the task is seemingly impossible. Overall, Grind Session tries to come across as a more street oriented THPS but doesn’t make it with the greats due to aggravating physics and poor level design.

X Games Skateboarding is kinda like the value rack version of THPS. While Burnquist, McCrank and Colin McKay seem like pretty logical character choices, Lincoln Ueda, Chaz Fernandez and Carlos de Andrade are pretty oddball. Guess their character budget ran out halfway through development or something. Chris Senn and Kerry Getz round out the lineup adding some legitimacy to the game.

One of the cooler inclusions is the “Burntwist” trick, but you can only pull it while playing with Bob. The board customization in the game is pretty cool, allowing you to semi-adjust your stats depending on if you choose tight or loose trucks, or fast/slow bearings. Why would slow bearings be a fucking option, though?

Last but not least, the voice over / announcer sounds like he’s wacked out on coke or something, super sports announcer-y and annoying, and he yells at you if you have too many bails… just like at the X Games!

The Simpsons Skateboarding is the game you truly with all your heart want to love but I guarantee will hate. The levels are poorly designed, the graphics are bad, and the tricks were kept to the basics, with kickflips, bs shove its, and tre flips being your only options and basic grinds.

There are some special tricks that have interesting titles, but none of them seem to be possible. Most of them call for a ridiculous amount of button mashing followed by the grab button, rendering them useless. Despite having played this games as a kid, even the nostalgia factor can’t save this one. I daresay it is the worst skateboarding game to have ever been developed.

+: You get to skate Springfield?
-: Pretty much every aspect of this abomination

This game kinda plays like a THPS, if THPS was designed for toddlers that only knew how to button mash. Any button you press makes do a random trick—which I’m sure is delightful for a 2 year old—but just hitting X over and over to do random tricks doesn’t do it for me. After torturing myself long enough I discovered that turning “Pro Controls” on in the options menu enabled me to control what tricks my character actually does. Sneaky!

+: Toy Story levels, good physics and playability
-: Made exclusively for children, so don’t pat yourself on the back too hard