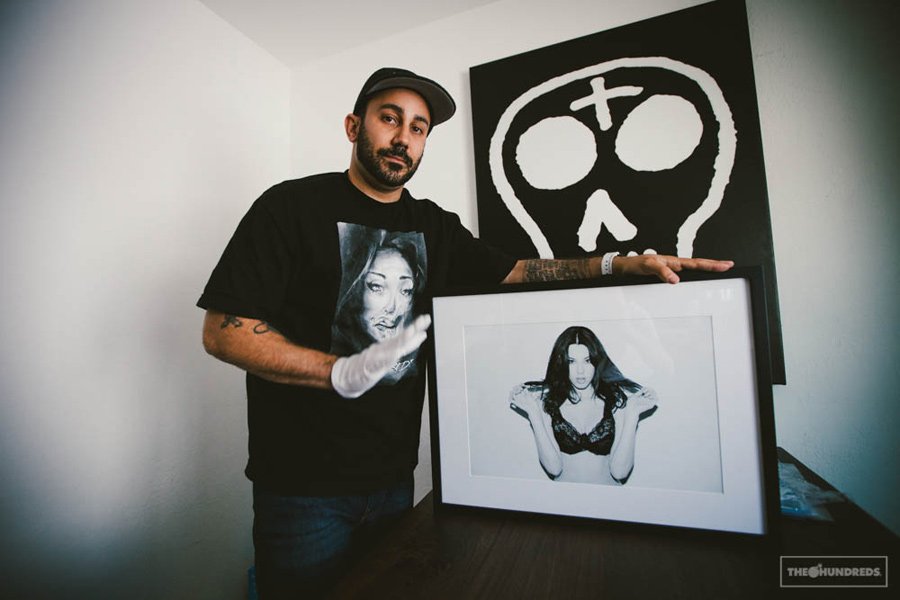 van styles with his work / photo: the hundreds

You got in the industry around 21, 22, you must have been making good money?
I’d say from 23 to 26, I made good money. VHS sales were still around, DVD sales were still strong, the internet, the Tube sites, none of that had really hit yet, so there was still money to be made. I had just signed a contract with Hustler – I had a royalty deal with them, which was like $2 a unit for VHS and DVD. Then at the same time, I was doing my own editing for the videos so I was getting paid an editing fee, and doing all the photography for them, so I was getting a photography fee. All these things kind of combined together.

$2 sounds per video sounds like a pretty good deal to me.
Yeah and I was putting out like a video or 2 a month. It all kinda added up. I would say for being that age, I was probably making minimum of like 100k a year. I guess it’s kind of the time frame where one would finish college and go get a job and I just happened to stumble upon this industry. For my age, that was a really good living, with no college experience, no exact background in anything I was doing. 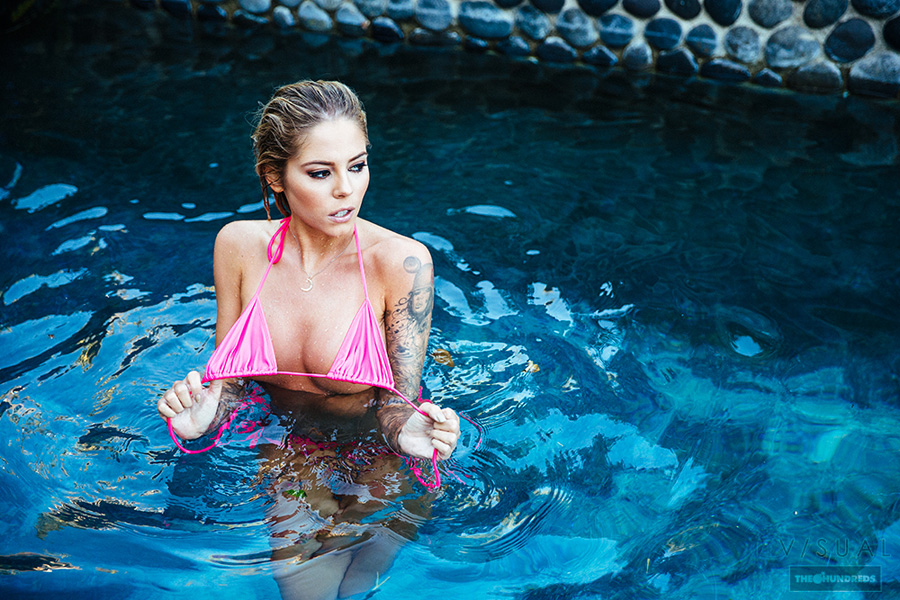 You were an Am for Status skateboards back in the day, are you bummed you didn’t pursue that more and tried to go pro?
I guess I’d like to say yeah, I’d like to think it would have happened but my friends and I grew up with a different mentality. The younger kids who were skating with us like P-Rod or Mikey Taylor, they had a different approach to it. They were almost that first generation, like, bring the generators out, light up spots at night and go kill it cause they saw that early on.

As for me and my friends being early and mid 90s skaters, we were like typical teenagers, skate all day during the day and at night go party and hang out and have fun. That drive wasn’t necessarily the same. Once I saw those kids – Paul early on was just so amazing on his board and when you saw that, you were like OK, this is the next generation. I’d love to be pro but this is gonna be the platform, and I’m not there. And then in skateboarding it’s kind of known there’s like that turning point age, when you are like 21, 22, 23, if it hasn’t really cracked yet, you can keep going for it and keep wanting it but at the same time, you’re getting older so you need to, I don’t wanna say grow up or act like an adult but you do need to handle your responsibilities.

I didn’t wanna be in my late 20s and be like fuck – feel like I pursued something that didn’t really pay off. The way I thought about it was, like I could do these jobs in Adult, which to me were a lot like skateboarding as far as the mentality, and then I could go skate and not stress, not worry about filming or getting certain tricks. I could just go skate and truly have fun now. 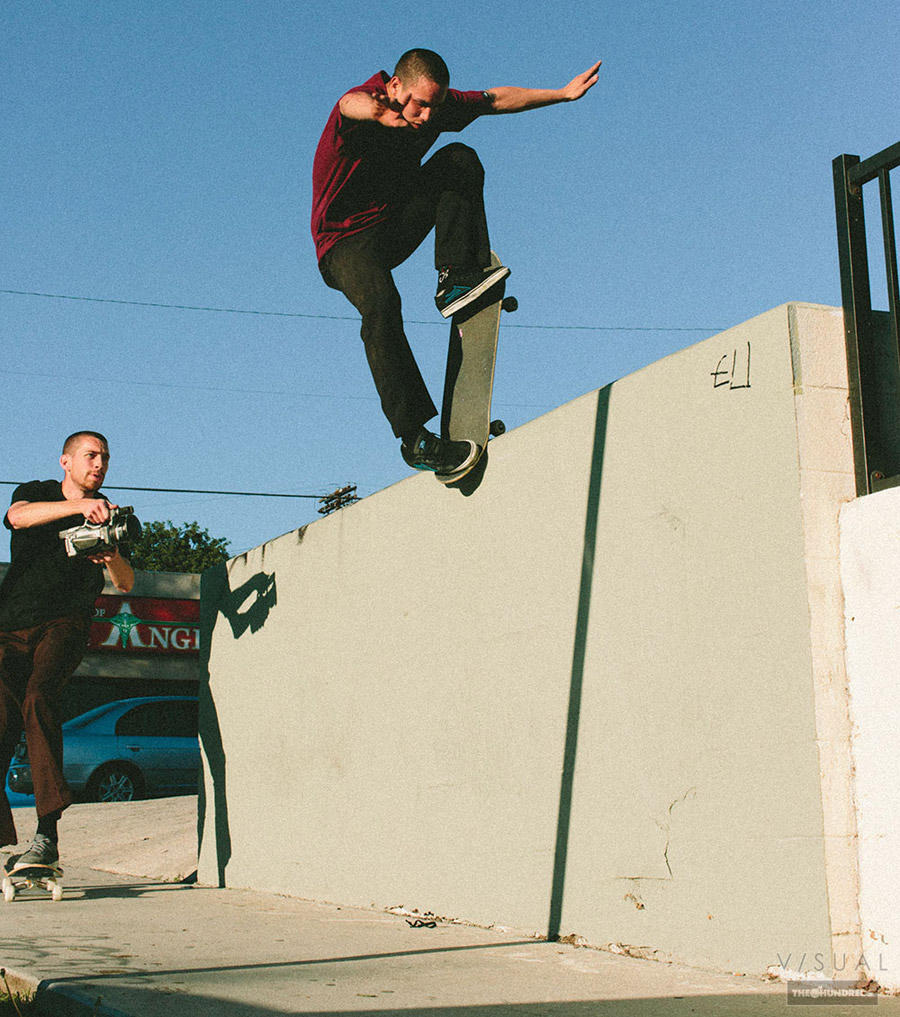 Now you are mostly known for your photography. When you’re editing your own photos of chicks, do you ever just get too turned on where you just have to beat off right then and there?
[Laughs] Definitely not. I do appreciate when a girl looks good, and notice she looks great in an image, but it’s not the same level as far as someone who would be looking at porno. For me, it’s what skating was to me at 13. I get asked a lot, like how many of these girls do you hook up with? And I understand most outsiders ideas, thinking that’s what this is all about but it’s really not like that. The chance I’ve been given from photography to be able to do what I love and make a living doing it, just the fact that I can walk out the door with my camera and shoot whatever I want and be happy, that’s what it means to me. It’s not a way to meet girls or get a girl half naked, maybe as corny as it sounds it really is an artistic approach or photographic approach to it.

Do you think there are a lot of people in Adult that take advantage of their situation as a photographer?
In the Adult side there are some that do that for sure, but as far as photography, I really can’t answer that. For one I don’t really hang out or talk or work with people that shoot girls. All my photographer friends whose work I respect and admire, they shoot different stuff. I don’t really follow anyone that shoots just girls, I’ll look at like Blabac’s work, Atiba, even older skate photo stuff from Jake Rosenberg, Daniel Harold Sturt, or current guys for landscape and street photography like 13th Witness and Trashhand. I would imagine there are guys that try to use photography as a tool to get laid or hook up with chicks, but I cant really confirm that.

Have you gotten any advice from one of those photographers you can share?
One of the things Mike Blabac said to me, which I kind of still hold in my head, was that once you learn how to photograph skateboarding, you can almost shoot anything else. That’s like the hardest thing to photograph. If you think about it, to properly convey and get a skate photo, where not only skaters can understand it and appreciate it, but at the same time be able to show it to anyone and have them be stoked on it, it’s kinda crazy. Versus something like football, or landscapes or even shooting girls. 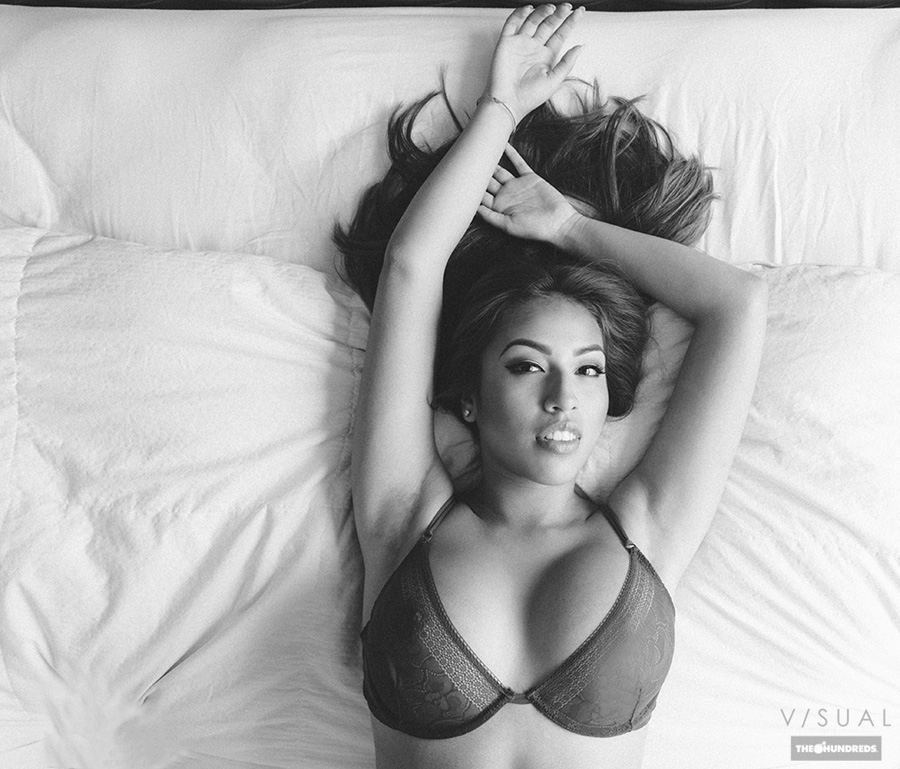 How did the internet affect the Adult industry? Has it made it impossible to make money off of videos?
Pretty much what happened was, when the internet was booming all of the companies that were out here in LA, they were all run by oldschool owners, so they didn’t look at the internet as the next platform. They looked at it like something to make a little extra money off of. Versus these younger guys who were in Florida and elsewhere, who saw the potential in it and they were like these sleeping giants who kept building their traffic and sites and understanding of the web and how it worked. By the time everything hit, when you have a city of companies that are making their money off of a platform that is dying, it’s too late to catch up when everyone else has already gotten their share of the pie in a sense. So now you had a whole industry of people trying to play catch up with this platform that the internet guys have understood and structured years ago.

If you were to look at AVN magazine, those issues used to be so thick, full of company ads. Same thing with Transworld, it used to be thick full of ads and articles and all types of stuff. Look at a Transworld from 2003 to right now, it’s so insanely different. They both just shrunk. The same thing happened in Adult.

”You can love it or hate it, but the internet broke down the walls where you don’t have to jump through hurdles to get to where you want to be now.”

I remember a lot of companies were complaining about the tubesites but the problem is, really in any industry, that the generations coming and growing up now, they are an instant download generation. They didn’t have a Tower Records. This new generation, that’s what they know. I think one industry that probably grasped this and understood it really quickly with some street sense is like Hip Hop. They would do free mixtapes and leak them out to everybody so it would create a demand. So when an artist dropped something worth purchasing, their momentum was there and it transferred over to that. That’s the same with the internet now, that’s why brands will drop quick little parts. It may not be a whole video production, but it will create momentum towards a brand or that guys boards or shoes or something. Create a buzz.

At the end of the day that is the beauty of the internet now. If you were a skater a few years ago and you wanted to be seen, you would have to go get your trick shot by that one photographer, who works at that one magazine and that was your platform, that’s how you got noticed. Now you can be some unknown kid from the midwest, where your part just creates that much buzz on Youtube that you get noticed. You can love it or hate it, but the internet broke down the walls where you don’t have to jump through hurdles to get to where you want to be now. 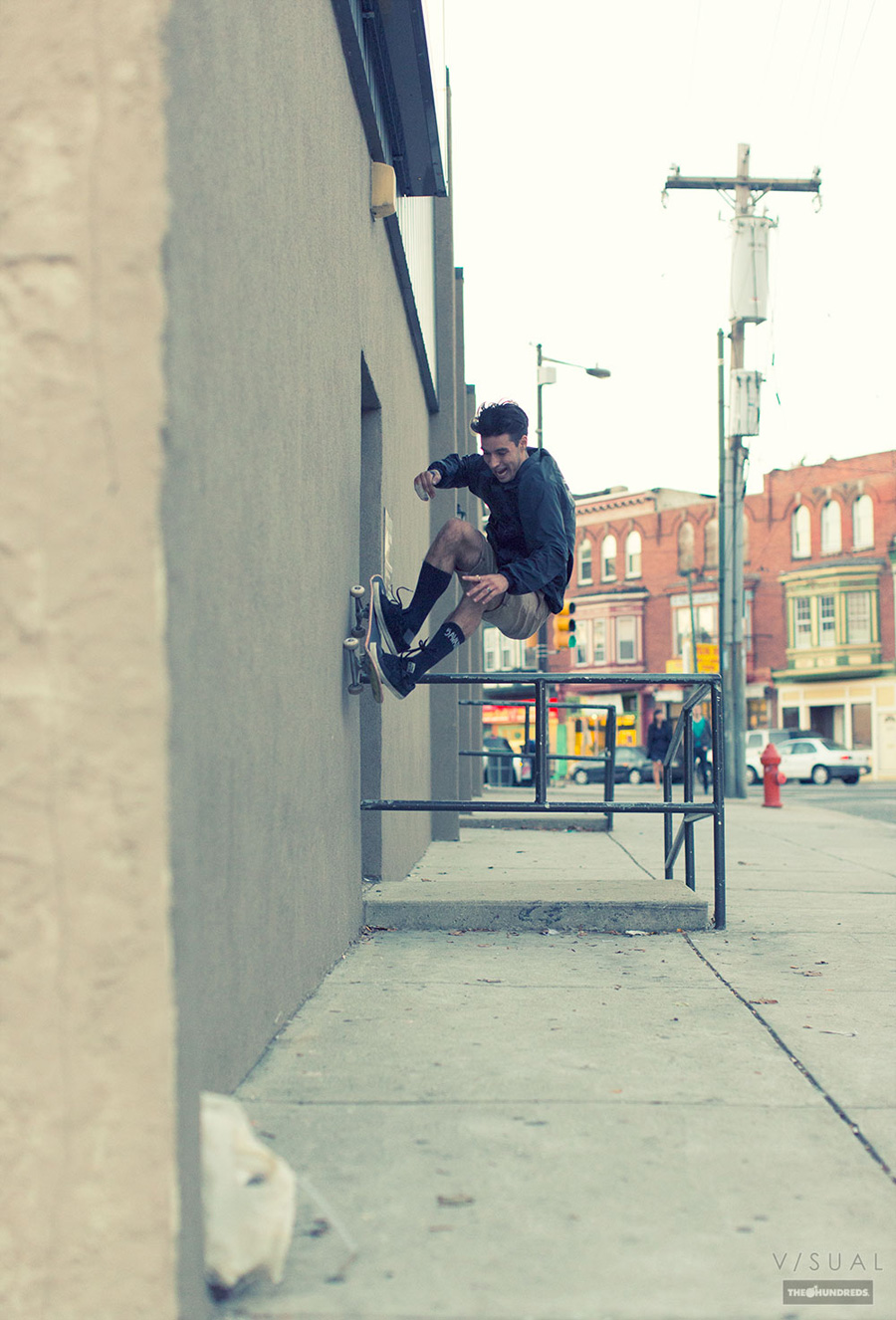 Does that make magazines not as valuable anymore? Because brands can just reach their own audience via Instagram & Facebook and don’t need to use a magazine to reach people..
Not at all, I believe these magazines still have a value and recognition. It’s one thing like, yeah you can post photos on your Tumblr and Instagram, but at the end of the day, if you get published in Transworld or Thrasher, that’s fucking rad still. I think it’s making them step up their game as far as who’s creating good content. They are seeing the kids with the momentum it’s like OK we gotta do something with this guy because he rips, he has a good following, all these elements come into play now. It’s a pretty unique time and I think these magazines still hold a great value. If you get a photo in Thrasher, that’s something you keep till your 60.

You seem like you kinda have that hustler style mentality. Have you always had that drive?
I just have a very determined and persistent motivation for something. Like with skating if I wanted to get a trick, I would go every weekend, like to the courthouse in LA, and get a trick into the pond just cause that’s how I focus. For me, I just apply that to more in life, when you want something you just have to focus and go for it. I don’t like waiting for other people to create things for me or hold my future in their hands, I wanna create it on my own.

Check out more of Van’s work over at The Hundreds.
Interview: James Lee
Photography: Van Styles
Free shit on our Facebook
Do not check out our Instagram