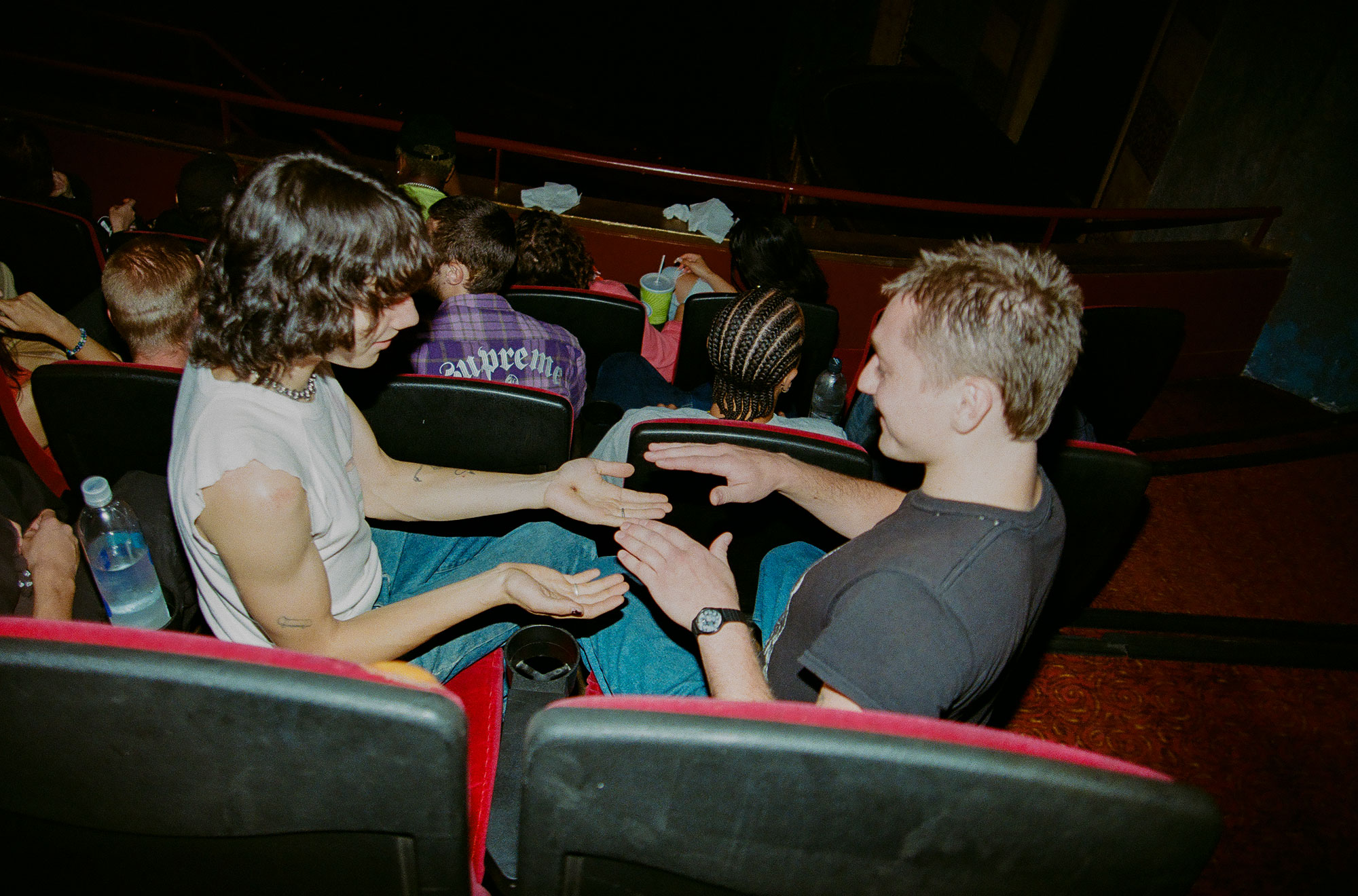 When you ask people what the most memorable skate video from New York is, a lot of people would probably point to Zoo York’s Mixtape.

Mixtape was an instant hit not for its tricks but for it’s presentation, vibe, and attitude. True to its mission statement, skaters weaved around the streets as Busta Rhymes, Fat Joe, Wu-Tang Clan, Diamond D and other ’90s hip-hop luminaries freestyled.

Filmed by Eli Morgan Gesner, the creative mind behind Zoo York, the freestyle footage perfectly soundtracked Mixtape and Zoo continued their rise but behind the curtain, there was more going on than just a convergence of hip-hop and skate culture. All the Streets Are Silent by Jeremy Elkin recently debuted at the Tribeca Film Festival and documented this unforgettable era.

The film, narrated by Eli and scoring by Large Professor, chronicles a period in the late-’80s into the ‘90s where hesitant Manhattan superclubs trusted rouge skaters such as Gesner to promote their parties in a quest for cool. With a lack of hip-hop being played in Manhattan Clubs, Gesner and his crew stealthily started pumping rap into the clubs, while letting all their grimey skate, creative, and graffiti heads in the back door to look cool and drink for free.

The parties bridged hip-hop and skateboarding and amplified what was unique about skateboarding in NYC–the music, the fashion, the grit, the approach, and the characters. It was completely counter to the California image that skating had perpetuated for decades and resulted in a complete reframing of downtown party culture still felt today.

Our friend Jacob Consenstein was on the ground at the premiere taking photos of the old iconic faces and new generation of faces who have these old heads to thank. Eli was down write up some captions for us, as well – Anthony Pappalardo 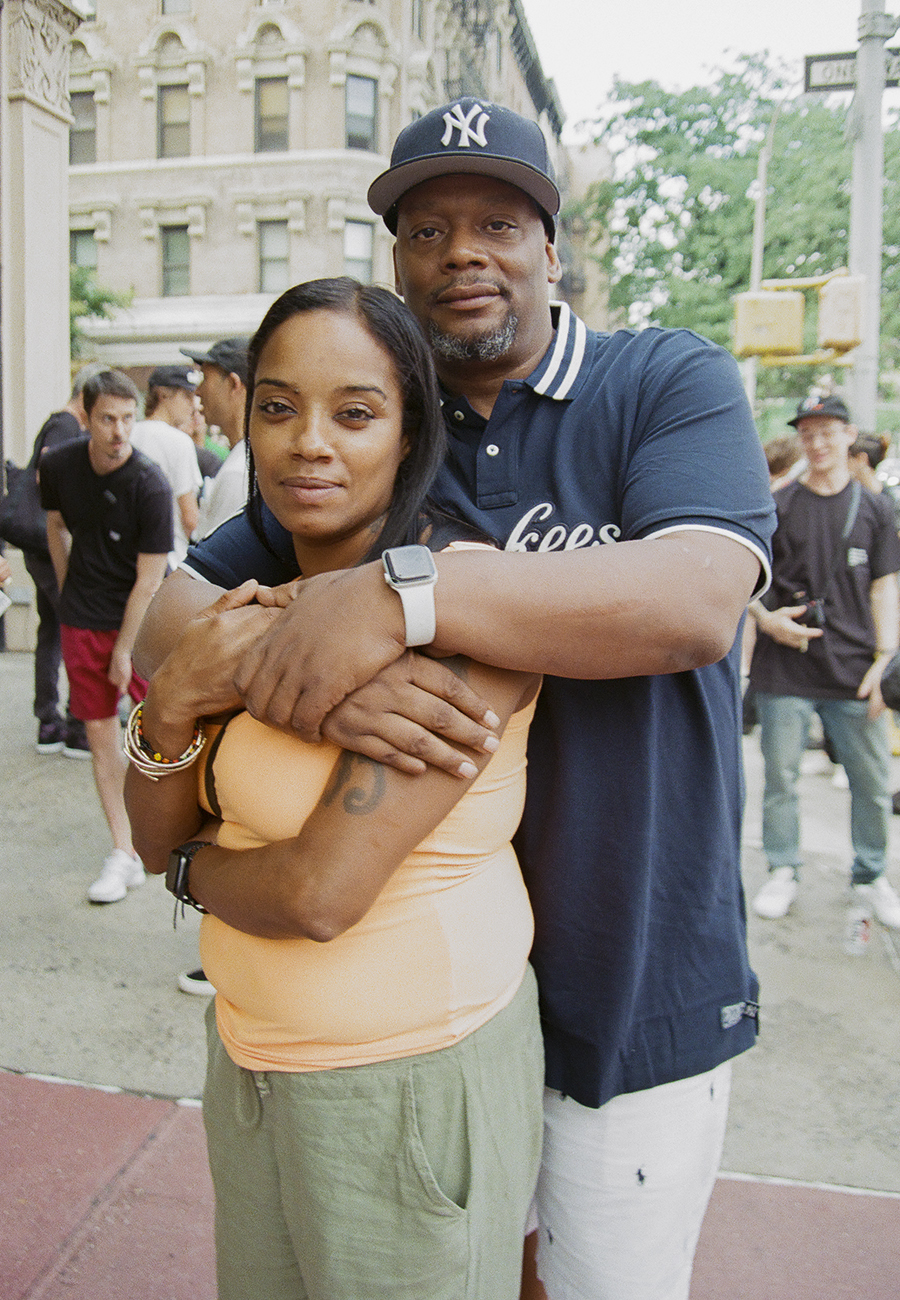 This is Ron Hunter. Harold Hunter’s older brother. I’ve known Ron since he was a young buck rollerblading around NYC. Ron exists in the strangest space for me because he is the one person that I know the most about without actually having spent a lot of time with him.

Every day, for almost twenty years, I would have to listen to Harold Hunter come into Zoo York and complain about Ron. We were like Harold’s therapists over at the old Zoo York.

Make no mistake, Harold loved Ron like his actual brother, but when I see Ron’s face I have twenty years of, “Damn man! Ron made me take the garbage out!” and, “Damn Man! Ron ate all my Chinese Food!” I love Harold for making me love Ron. He’s a good dude. 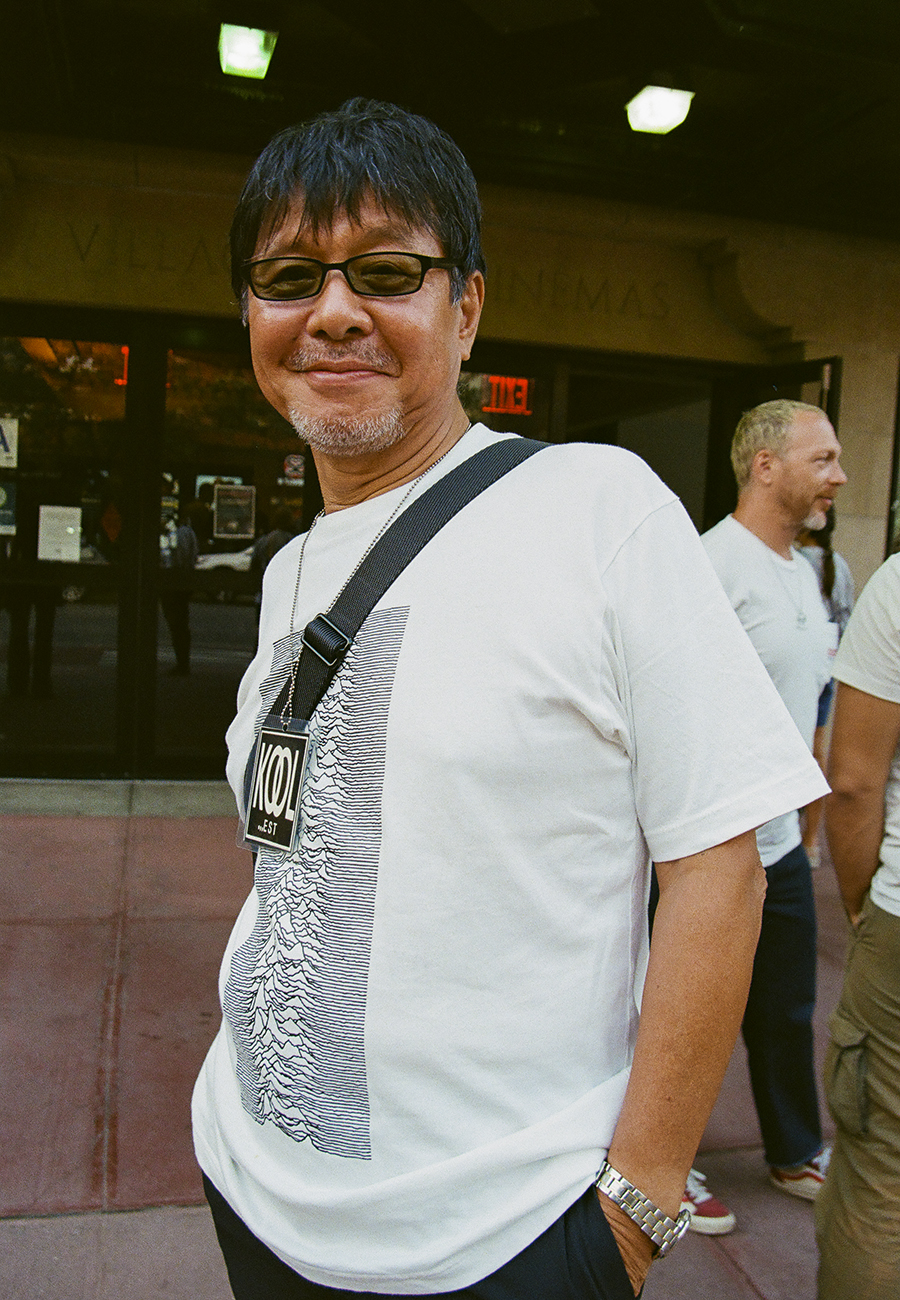 Yuki Watanabe was the first person to pay me to be creative, push limits, and act like a lunatic for a living. I had other jobs before Yuki; working in skate shops and design firms, and I had already gotten paid for art that I had made, but Yuki was the first person to pay me, on a weekly basis to show up, come up with crazy ideas, and make those crazy ideas come to life. And I got to do it with my best friend Beasley.

As long as I live, nothing will ever compare to being a wild ass teenager and having the coolest motherfucker from Japan bankroll whatever crazy shit Beasley and I could come up with. All Hail Yuki. 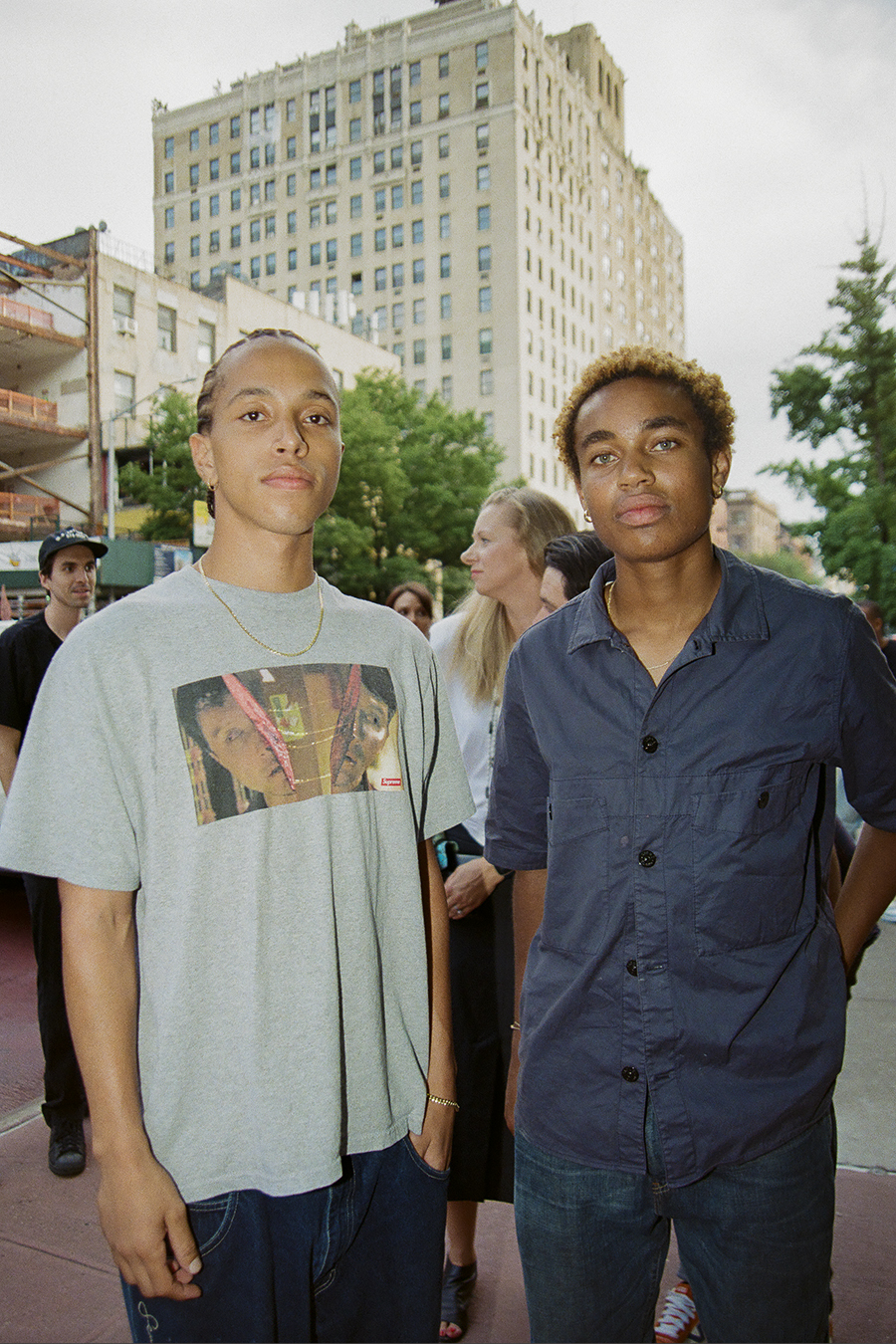 This is Seven Strong and Troy Gipson, probably the two best-looking people at the premiere (besides Jennifer Connelly and Paul Bettany) Being a fifty-year-old, I had to look these kids up on Instagram. Not surprisingly, these two are skateboarders and they’re fucking good at it.

Seven Strong is perfectly named because he skates with the style of seven men. Troy Gipson skates like he has Spiderman feet. His catch is bananas. To a guy like me who comes from the generation that was trying to figure out how to ollie over a board, it’s insane to see where the next generation is taking it. 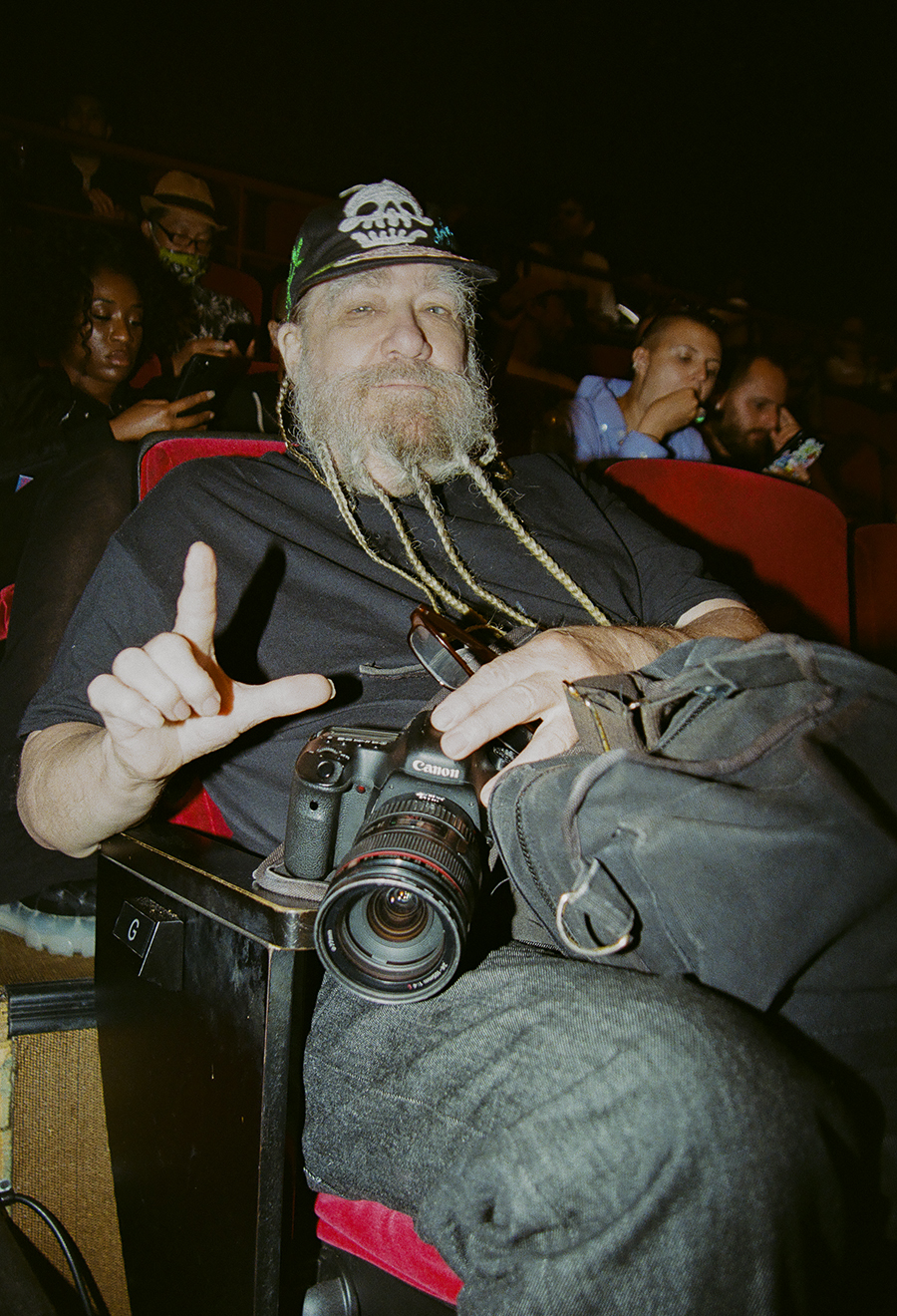 He’s never without his camera or his signature, handmade, Clayton Hat on. Rocking his new cornrow style Bo Derrick beard to the premiere, this is the first time I can see the lower half of Clayton’s face since the 1980s. 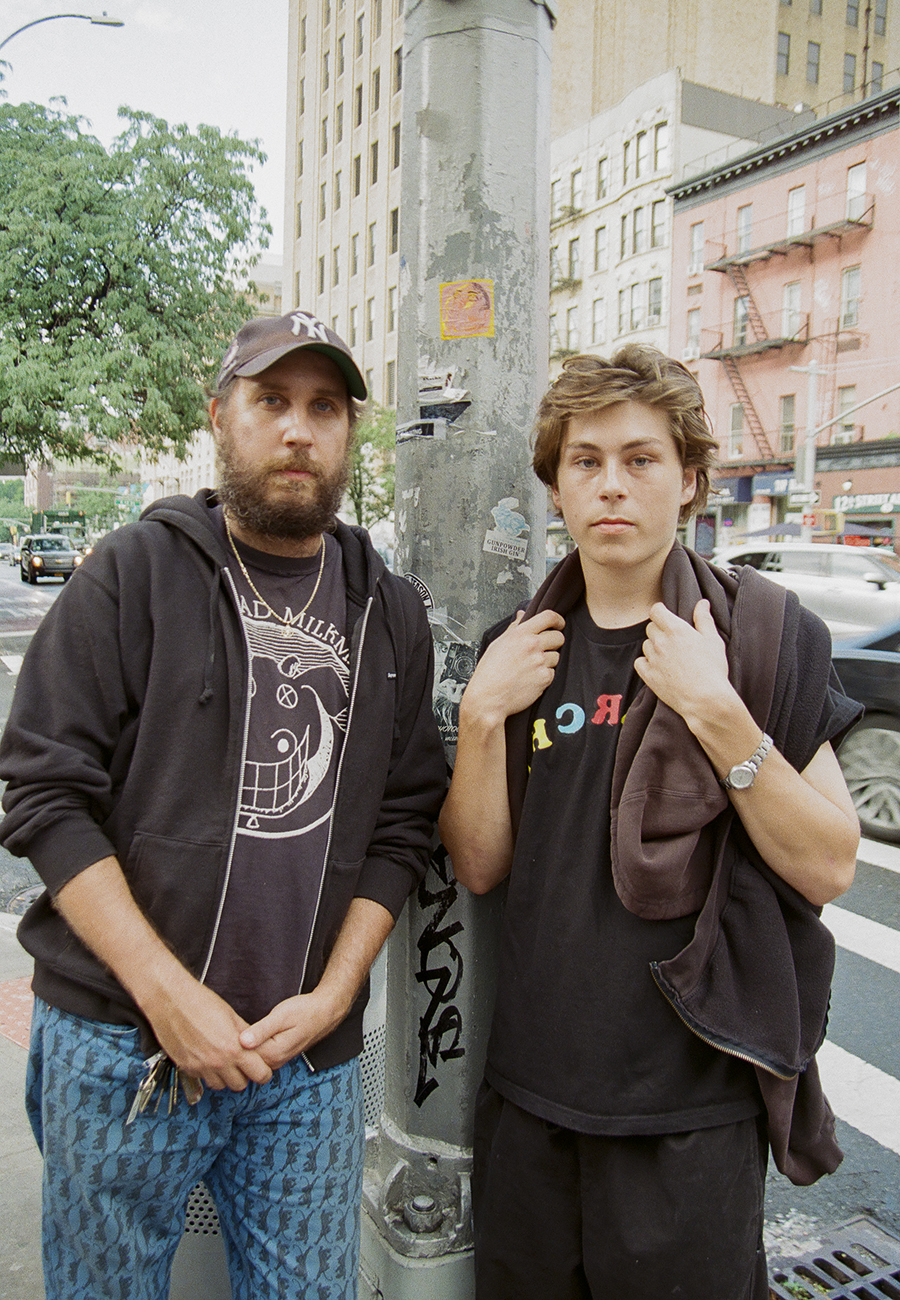 Among other things, Strobeck is famous for discovering that the Zoom-In / Zoom-out feature of the HPX actually works while the camera is recording. Bill (to his friends) holds the world record for shooting portraits of strangers standing in front of a photo of the exact wall that the strangers are standing in front of. Meta as fuck. Bill’s a genius. Bill’s sidekick here is Patrick O’mara, a very accomplished young skater from LA. He has back 360s on lock. 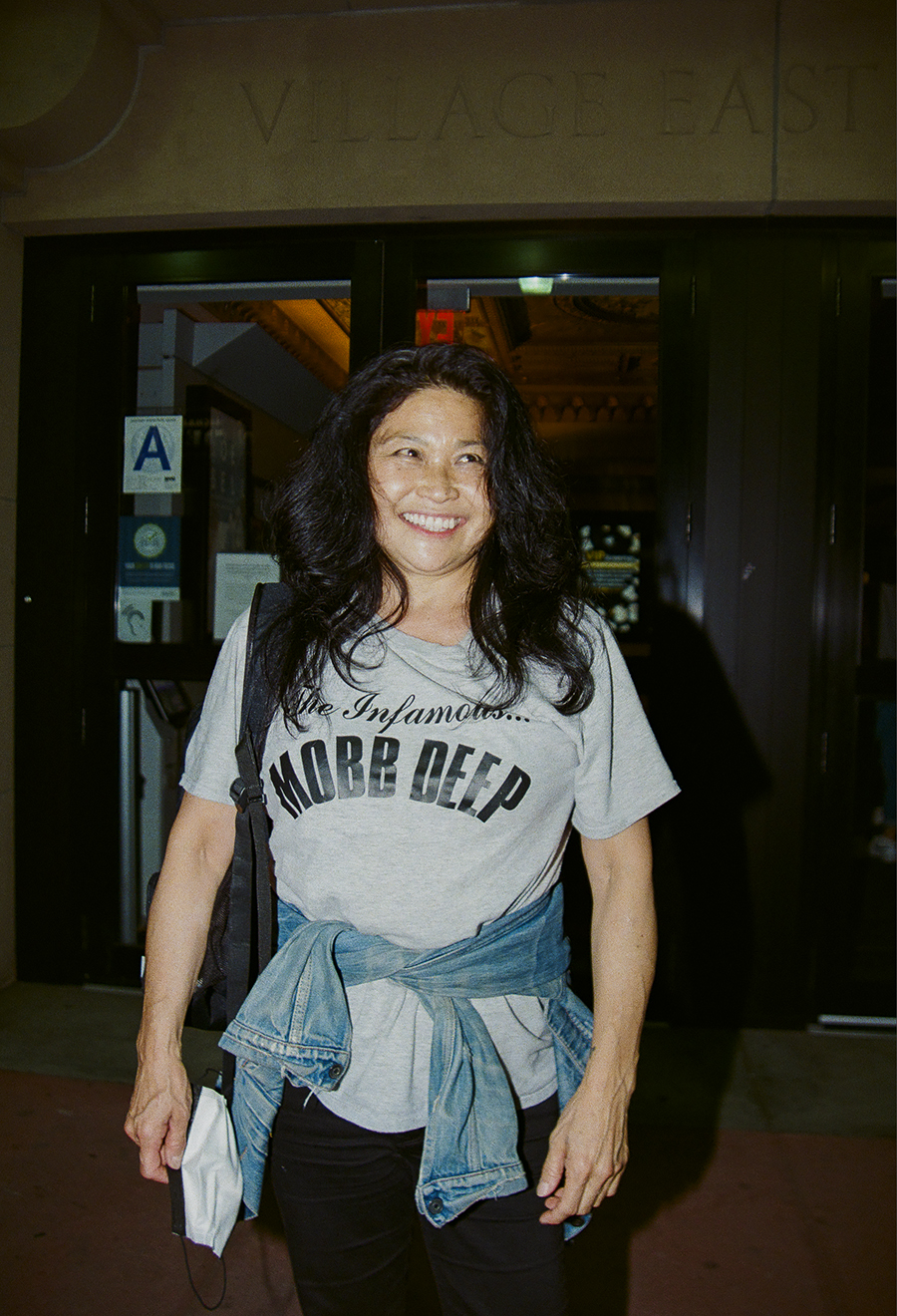 Not only has Sue Kwon shot every gangster ass rapper over the last thirty years, but her books Rap Is Risen and Street Level are on permanent display on my bookshelf. Do yourself a favor and cop her books. She’s that good. 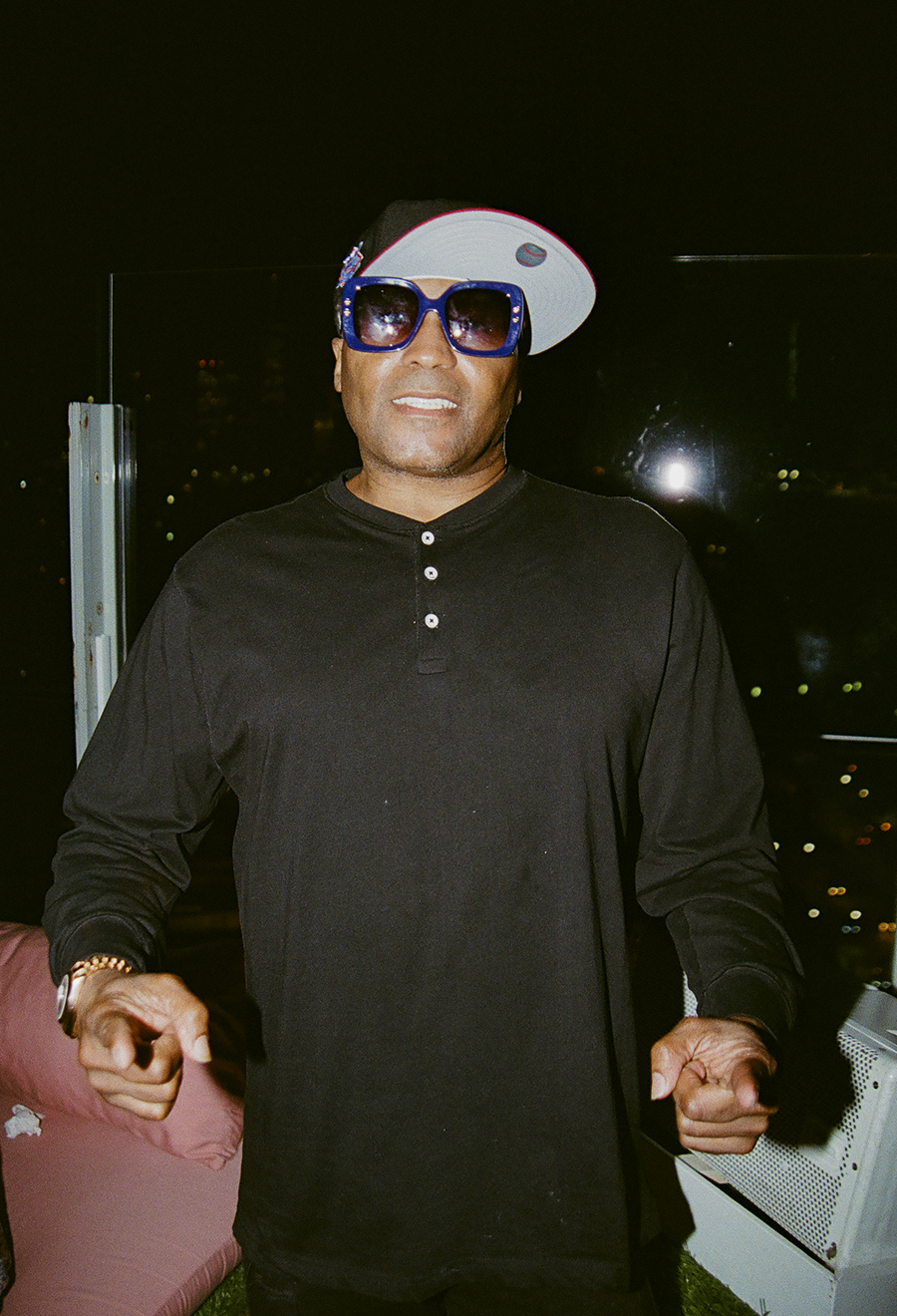 Growing up, hands down, my favorite all-time rapper was this motherfucker. Kool Keith. As far as I’m concerned he took rap to some other place. A place beyond what everyone else was thinking about. With his original crew, Ultramagnetic MCs, Keith straight changed everything for me. Rap could be abstract art. Black Elvis, Godfather Don, Poppa Large, Dr. Octagon. [all Kool Keith aliases] I stand in awe of Keith. Always have. Always will.

So you can imagine how blown away I was when he came to our premiere. Life dream achieved. But then, at the next night’s Q&A, guess who was in the audience watching? Keith and his lady. Again. And then the NEXT night. There’s Keith again in the front row. Three nights in a row. Friends come and go. Kool Keith is forever. 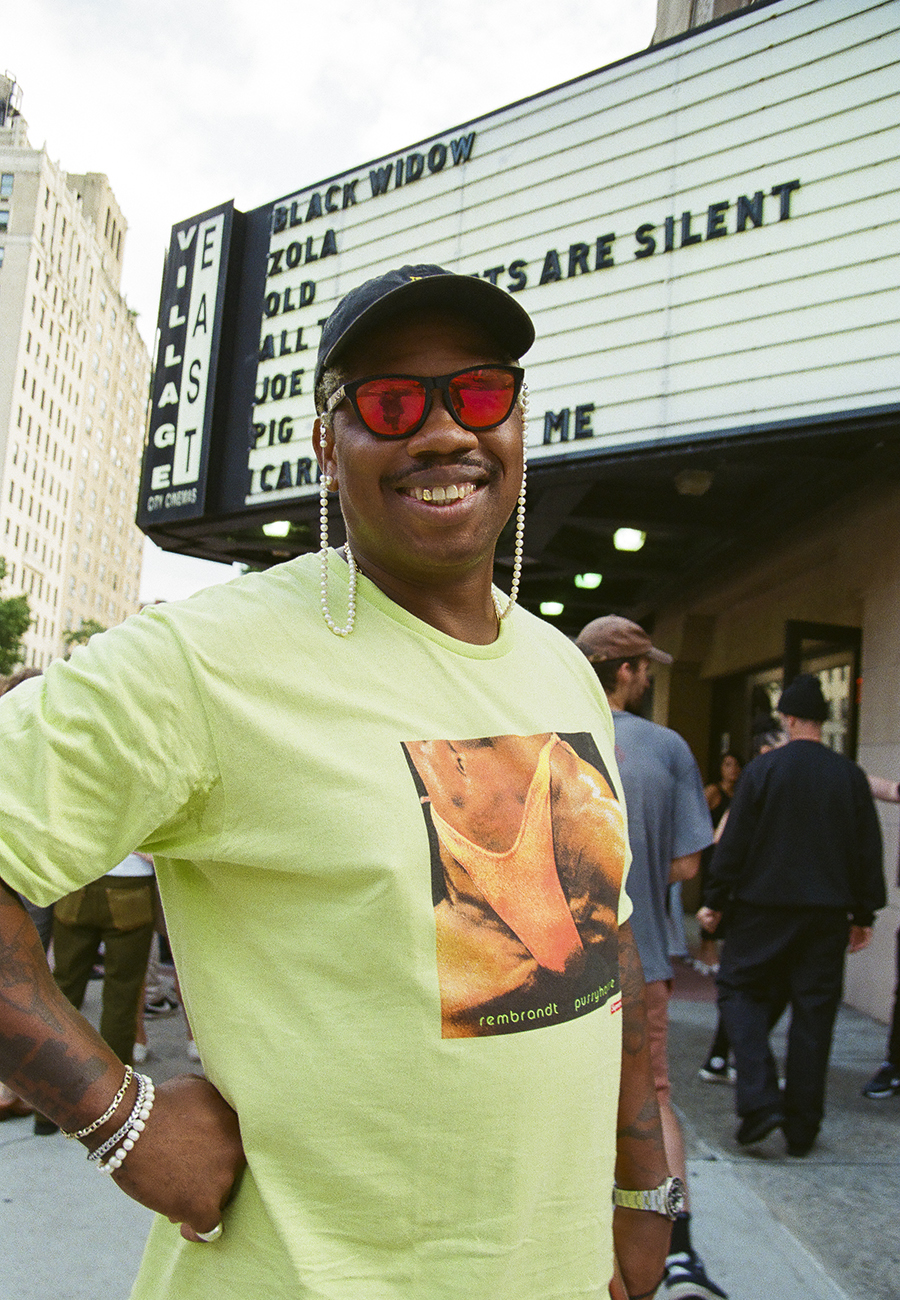 This is Mr. Kunle F Martins Jr. One of the bravest men I have had the pleasure to know and work with. He is an incredibly talented artist and I’m lucky to call him a friend. As you can see from his pearl eyeglass strap, he will gladly knock you the fuck out if you act dumb.

You might think that Rembrandt Pussyhorse is a random Supreme tee graphic but it is, in fact, one of my all-time favorite albums. It is the second full-length studio album by the Butthole Surfers (1986) and you must go find it on YouTube now and listen to it. Now! 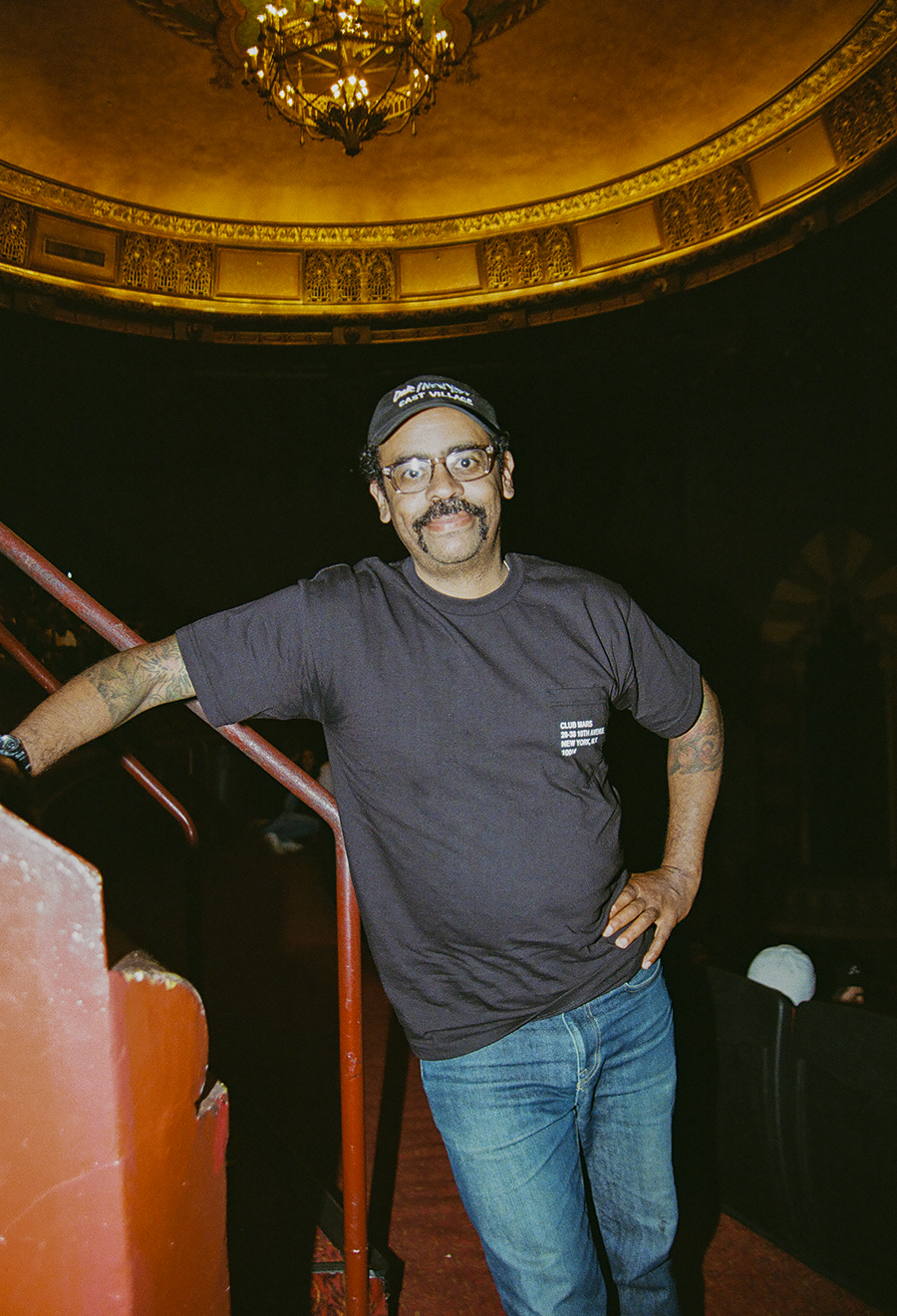 This is Dave Ortiz. He is my Chewbacca. Pretty much everything I ever did from Club Mars on afterward, Dave was there helping me out. He was our Mr. Everything at Zoo York and went on to found Dave’s Quality Meat.

There is no word in the English Language to express how much I love this motherfucker. I’ve watched him grow from the most awe-inspiring wild man to the most inspirational zen ass adult. AND he designed the Nike Air Max 90 Bacons! What the fuck? 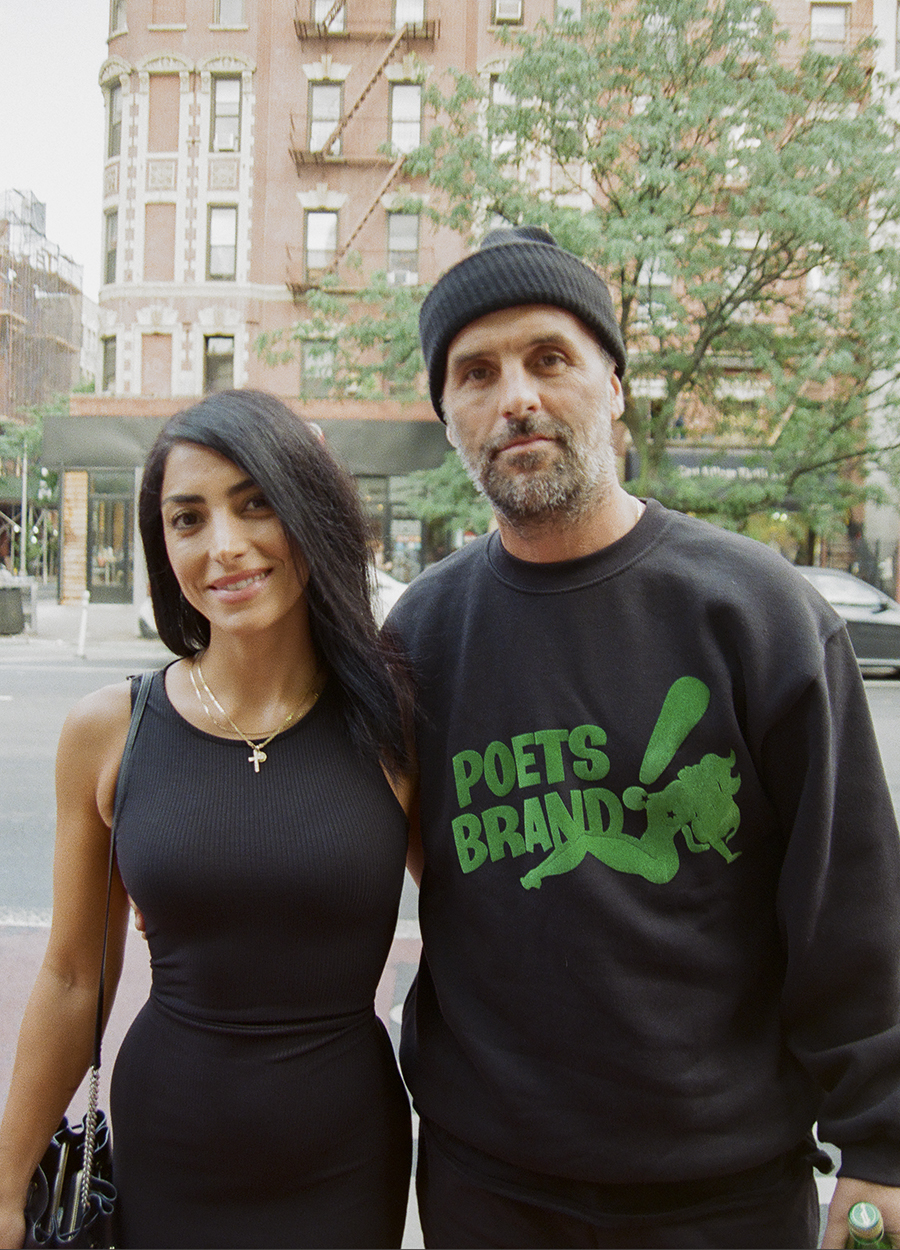 If you listened to my 17 hour-long episode of The Nine Club then you might remember me telling the story of my Grandfather’s old saying, “How did the girl who got fat from eating too much cake lose all the weight? She got a job at the cake factory.”

Here is the embodiment of that concept, Noelle Scalla. She, and her family, are the owners and operators of Cafe Belle on Mulberry Street. For over 70 years her family has been baking up the most incredible Italian pastries, cookies, and cakes. And look at her. She is absolutely sick of eating her delicious rainbow cookies (my personal favorite). My Grandfather was always right. 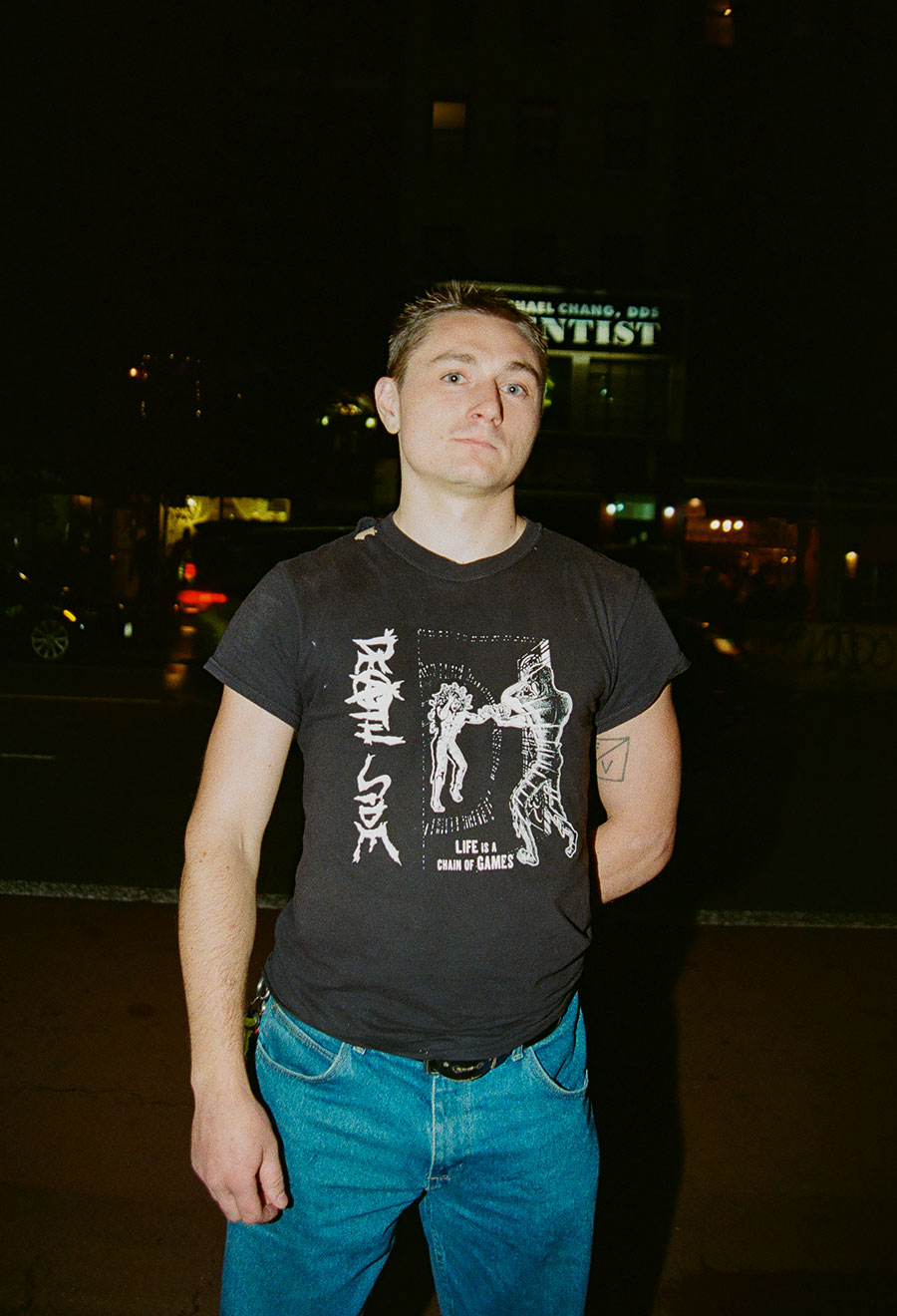 This is Ben Kadow. And I hate him. I started skating in 1982 and it’s been a lot of fun. I had full-page photos in Thrasher, Power Edge, and Transworld. Had a few little video parts and clips here and there. All in all, not a complete failure. But truth be told, it was a struggle. I really had to work hard for whatever little footage I got. Ben Kadow is so fucking good at skateboarding it makes me hostile with envy.

Someone would scream, “Holy shit! There’s a fucking 40 foot live Crocodile crossing Orchard Street!” And Ben would be like, “Cool. I’m headed to the Bodega anyway.” Then just board slide the whole crocodile going eighty miles per hour, hop off, and get a bacon, egg, and cheese.

PRE-ORDER ON ITUNES HERE
Intro: Anthony Pappalardo
Captions by: Eli Morgan Gesner
Photos by: Jacob Consenstein
Share this with an old skool New Yorker on Facebook
Report this is as 2 tuff on Instagram and Twitter