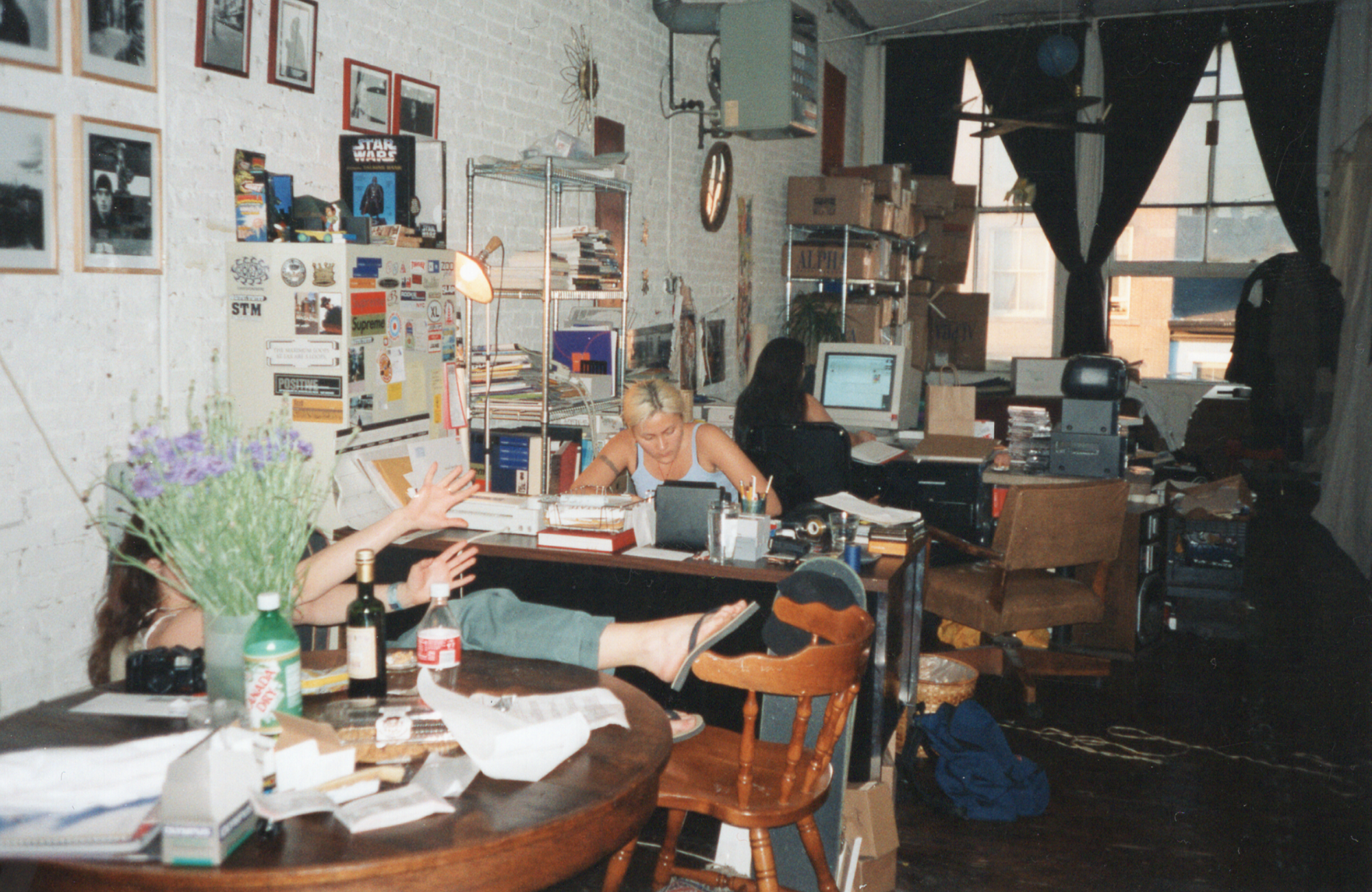 Rookie Skateboards, a downtown Manhattan brand founded by Catharine Lyons and Elska von Hatzfeldt in the mid ’90s, has pioneered so much we see out of skating and streetwear today.

While it’s not common to this day, it was even more of an anomaly to have a woman-founded skate company at the time when Rookie started. In that era, there were some supporters in the industry who were more open-minded.

This piece was written by Jessie Van Roechoudt, a former Rookie team rider, to give us a look into the history and lasting impact of the company. 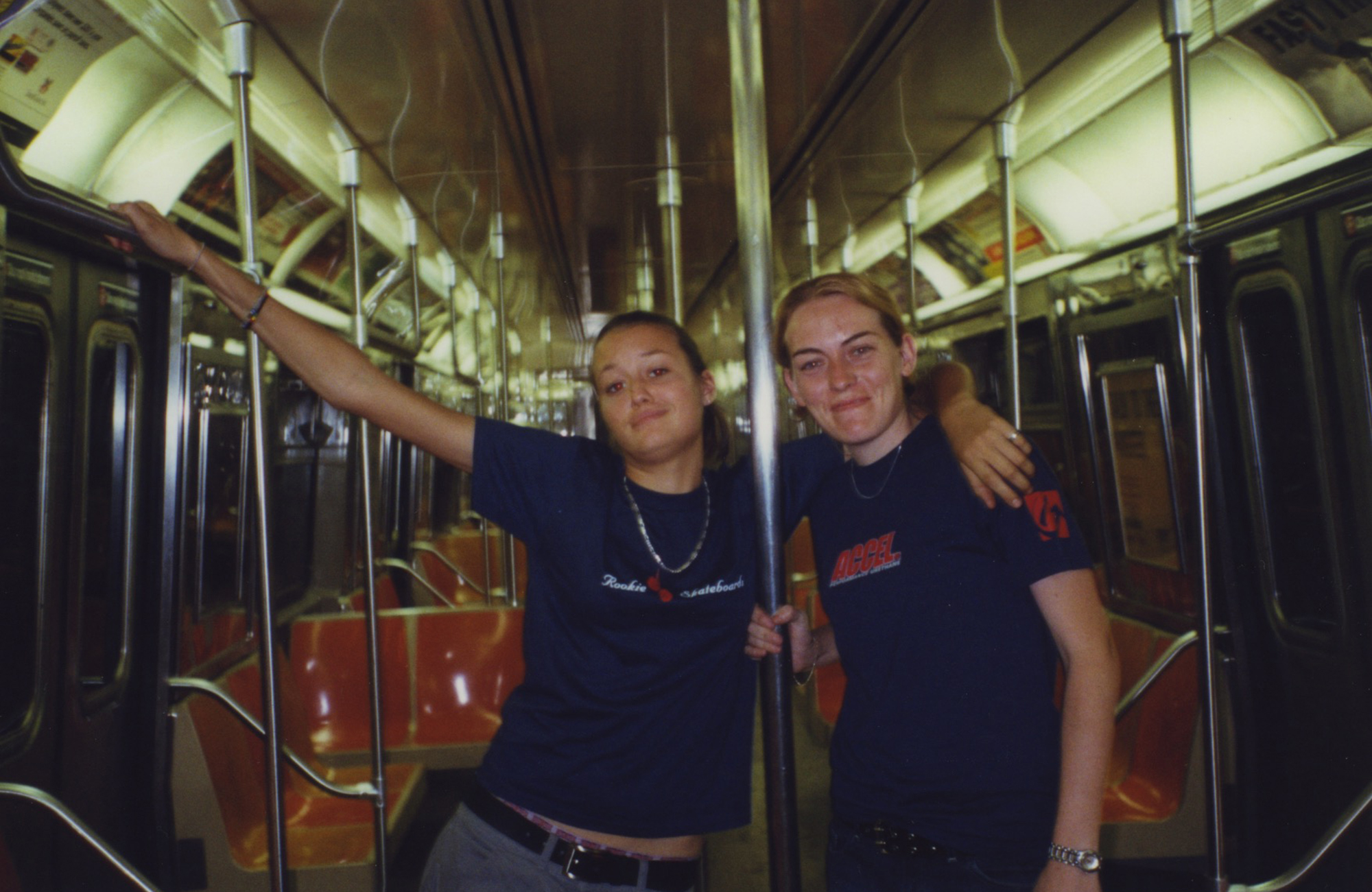 Catharine and Elska founded Rookie in 1996, and today people say Rookie Skateboards was ahead of its time – though it’s more appropriate to say that Rookie’s inclusive team roster, brand identity, and art direction were on point, and the rest of the skate industry just took 25 years to catch up.

The catalyst for founding Rookie came about at an art show that was held at the base of the Brooklyn Bridge in the fall of 1995. The show featured a ramp, and the artist invited skaters to skate it as a sculpture in motion. The show was busy and chaotic – and pretty much impossible to even get near the ramp. Catharine and Elska asked the artist if they could come back and skate the ramp later when it was less crowded.

Through this experience, they started talking about the lack of women’s product in the skate and streetwear shops that they were working in. At the time, Elska worked at Swish Skate Shop and Catharine worked around the corner at X-Large. The product they were seeing in those shops geared towards women was missing the mark. Everything was either cutesy, childish, or super sexualized. They realized there could be a place for clothes made for women by women. 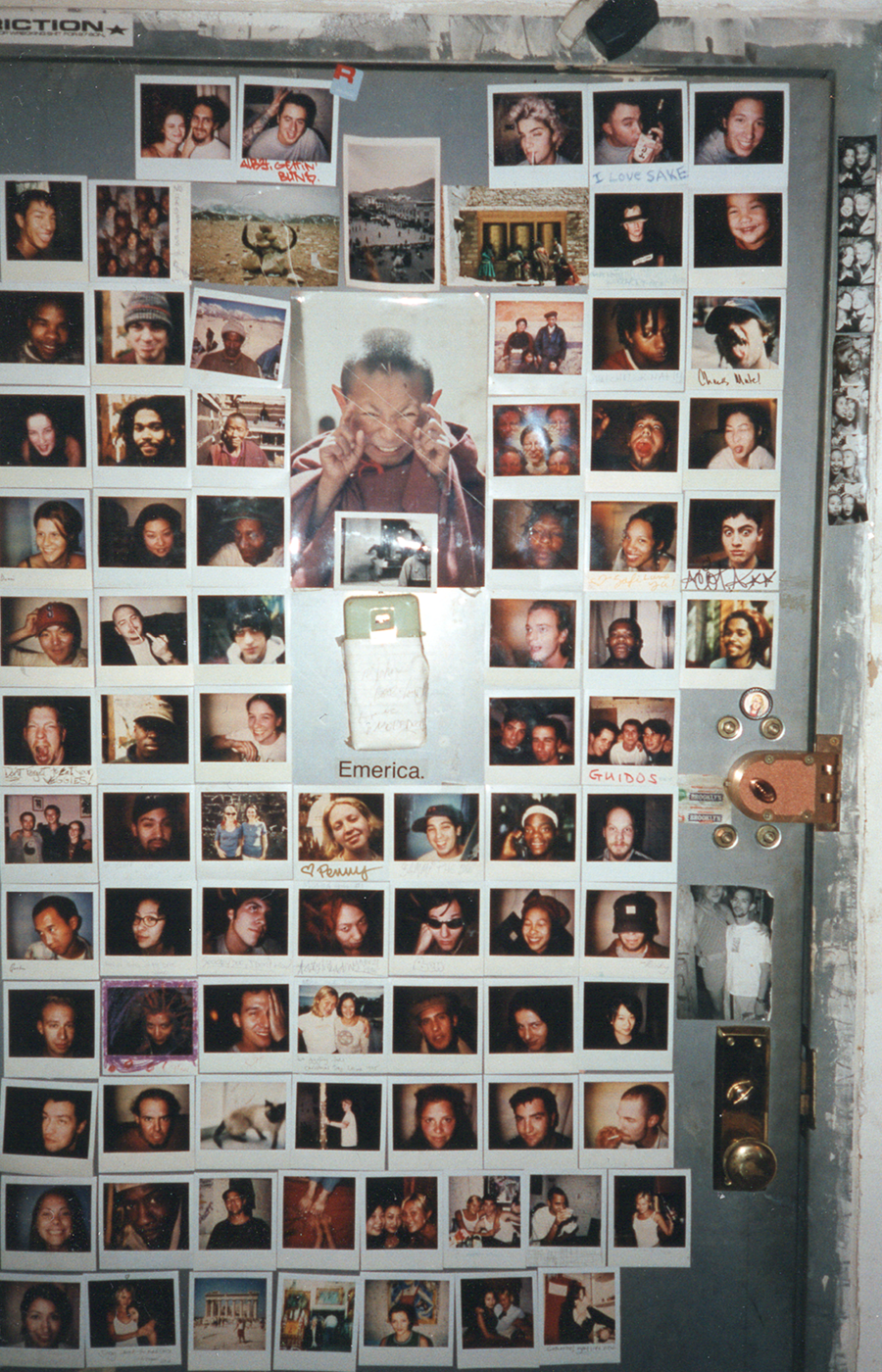 In 1996 they founded Rookie, based out of a former factory loft on Canal Street, at the top of a seemingly endless long staircase. The walls of the stairwell were lined with graffiti and art from artists who were on the cusp of breaking out in galleries and museum shows. The loft was part office, warehouse, design studio and home. It was also at the center of New York skate culture.

“It was like a hangout for everybody in the New York skate scene, and anyone who was visiting New York in that era also passed through the loft at some point,” said Elska, “It was such a moment in time – we definitely knew it was special, but not to the degree that it was in hindsight.” Supreme, Zoo York, 5Boro, and Brooklyn Boards were all new companies out of NYC at that time, and were all quite supportive, sharing knowledge of manufacturing and other logistics to help get things started. 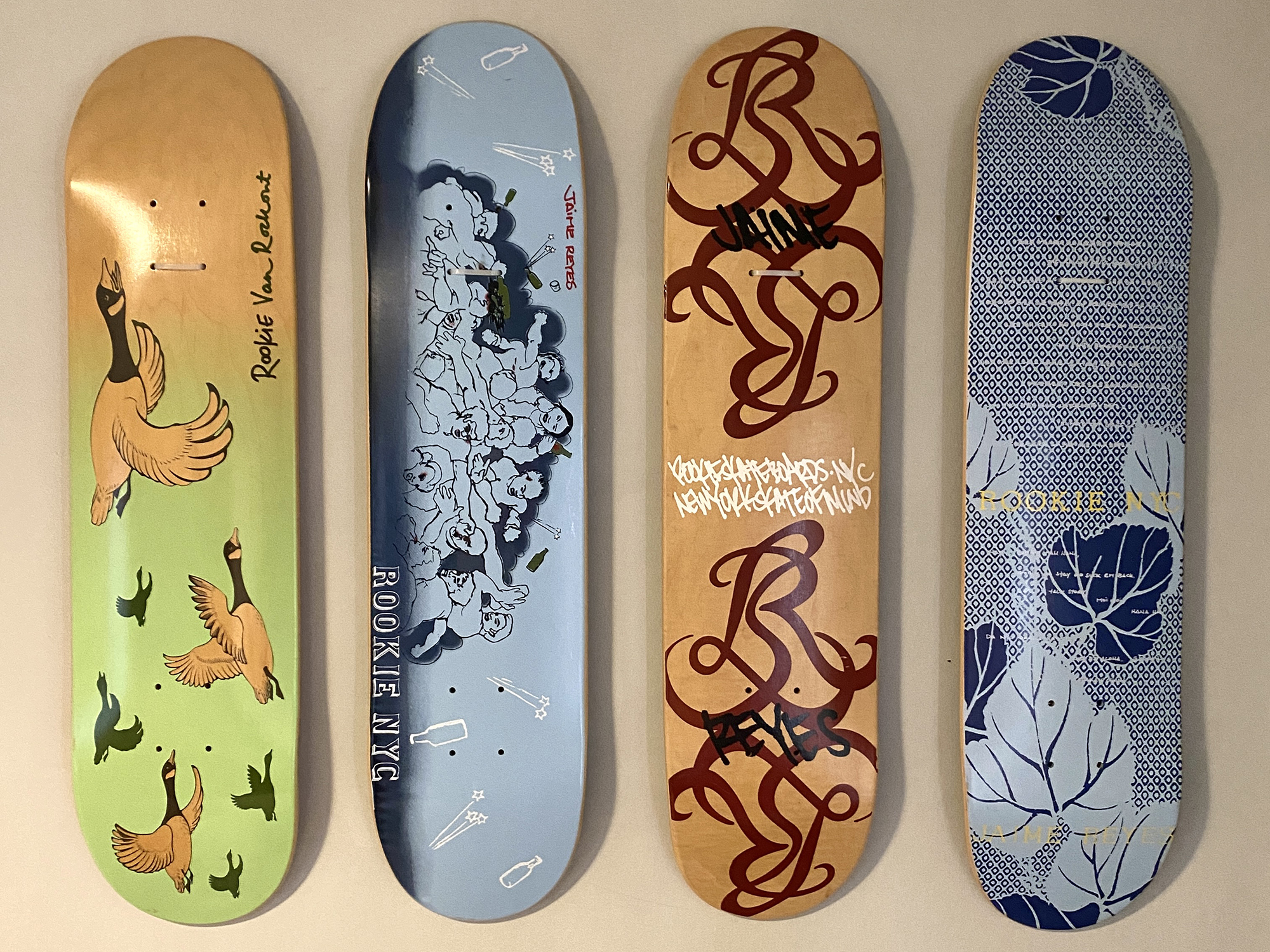 Rookie created apparel in smaller sizes than most skate companies’ sizing to fit women with similar wearable styles, but always with nice details that set it apart, like cut and sew cargos made in NYC’s Chinatown with lots of custom details.

Rookie’s brand identity and art direction were distinct – clean but raw at the same time. The ads were a mix of skate photos and lifestyle shots. The shots were subtle and played into the idea of a dysfunctional family, while also having a great-looking NYC vibe. Elska was also in charge of the art direction and design of the company. Elska, who is from Australia, explained that “Being an outsider in New York, made it easy for me to see what was so appealing to other outsiders about New York.” 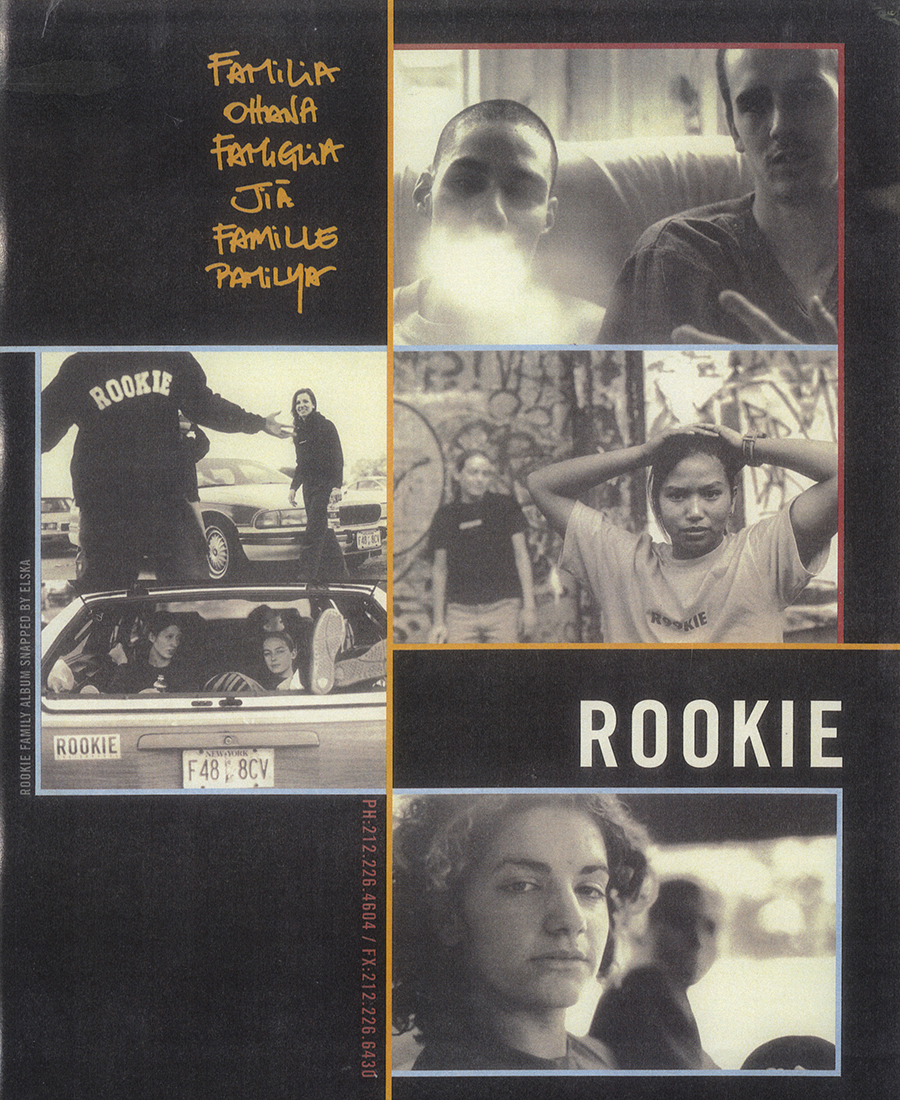 The board graphics often featured up-and-coming artists who were friends with the Rookie crew. Espo, Dalek, Tiffany Bozic and Princess Tina (Beci Orpin) all had their artwork featured, several of them as reoccurring themes on boards throughout the seasons.

I met Catharine and Elska at a demo in San Diego in the fall of 1996. They saw me skating and gave me a business card with an old-fashioned landline number on it. They said if I was ever in NYC, I should give them a call. That was pretty much the extent of the interaction. Then, through several random unlikely circumstances, I ended up calling them, which ended up being one of the best decisions that I’ve ever made.

It seemed like a lifetime apart, but I now realize it couldn’t have been more than five weeks later. I was at JFK about to fly back home after a coast-to-coast road trip with friends. I was in line for airport security and had to empty all the change out of my pockets – even in that era change was kind of useless, except that you could use it to make phone calls on payphones. I always tried to make use of that potential, especially in an era when people didn’t carry phones around in their pockets. 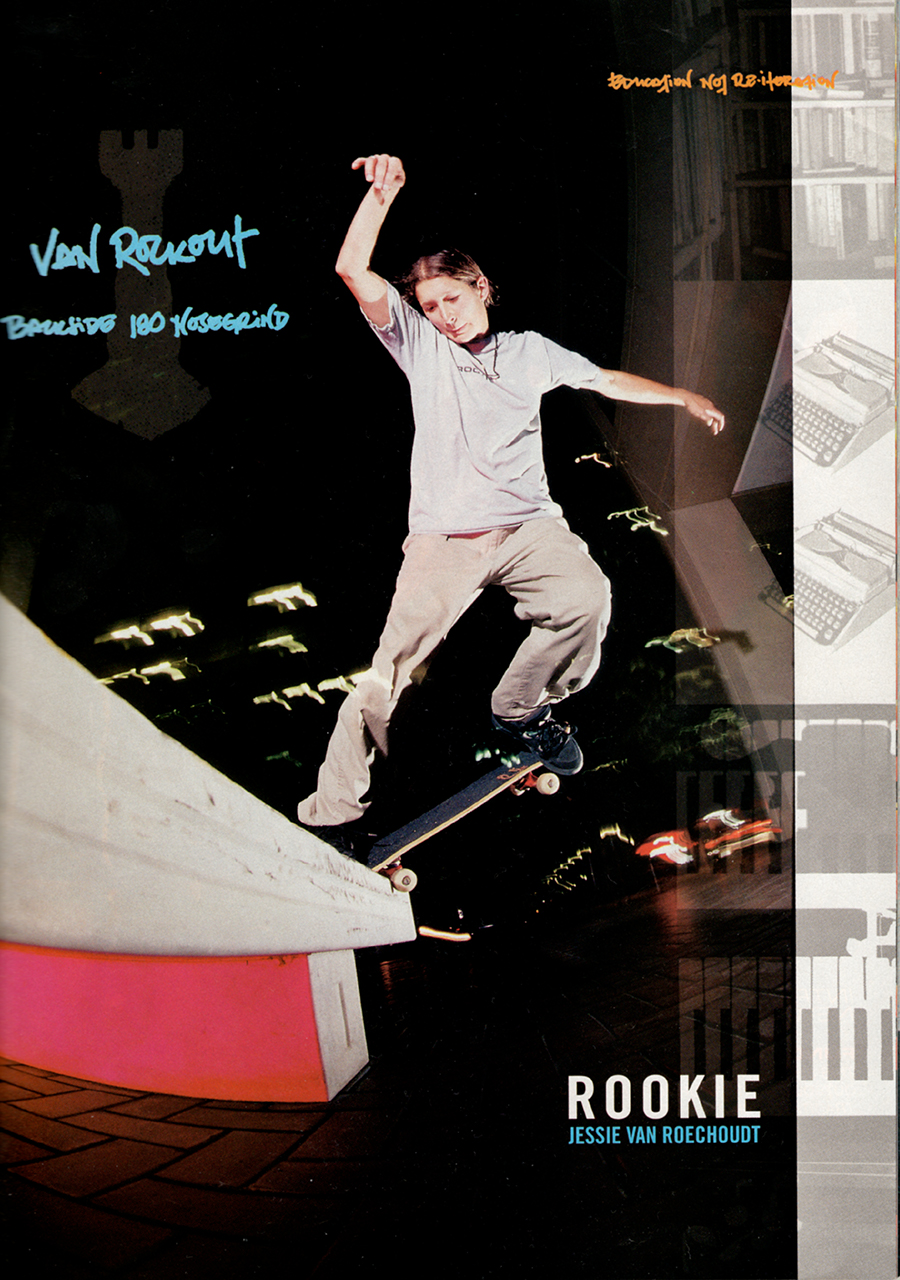 I remembered the card that Catharine had given me in San Diego. Since I was still living out of the same backpack, I had the card with me, and decided to try giving the number a call. It turned out to actually be the X-Large shop, and luckily Catharine was working when I called. She said if I wanted to take the A-train into the city, I was welcome to stay. I decided right then to bail on my flight. Even though it seemed kind of crazy at the time, it was hands down the best decision.

Catharine gave me directions to the shop, and from then everything just rolled. I left my backpack at the shop with Catharine and she took me across the street to Supreme to introduce me to Gio Esteves, and from there I ended up skating around SoHo with Rich from Brooklyn Boards, and Harold Hunter. I stayed with the Rookie crew and was one of the first riders on the team. Kyla Duffy and Lauren Mollica were the first. Pretty much as magical of an intro as you could have to skating in NYC. 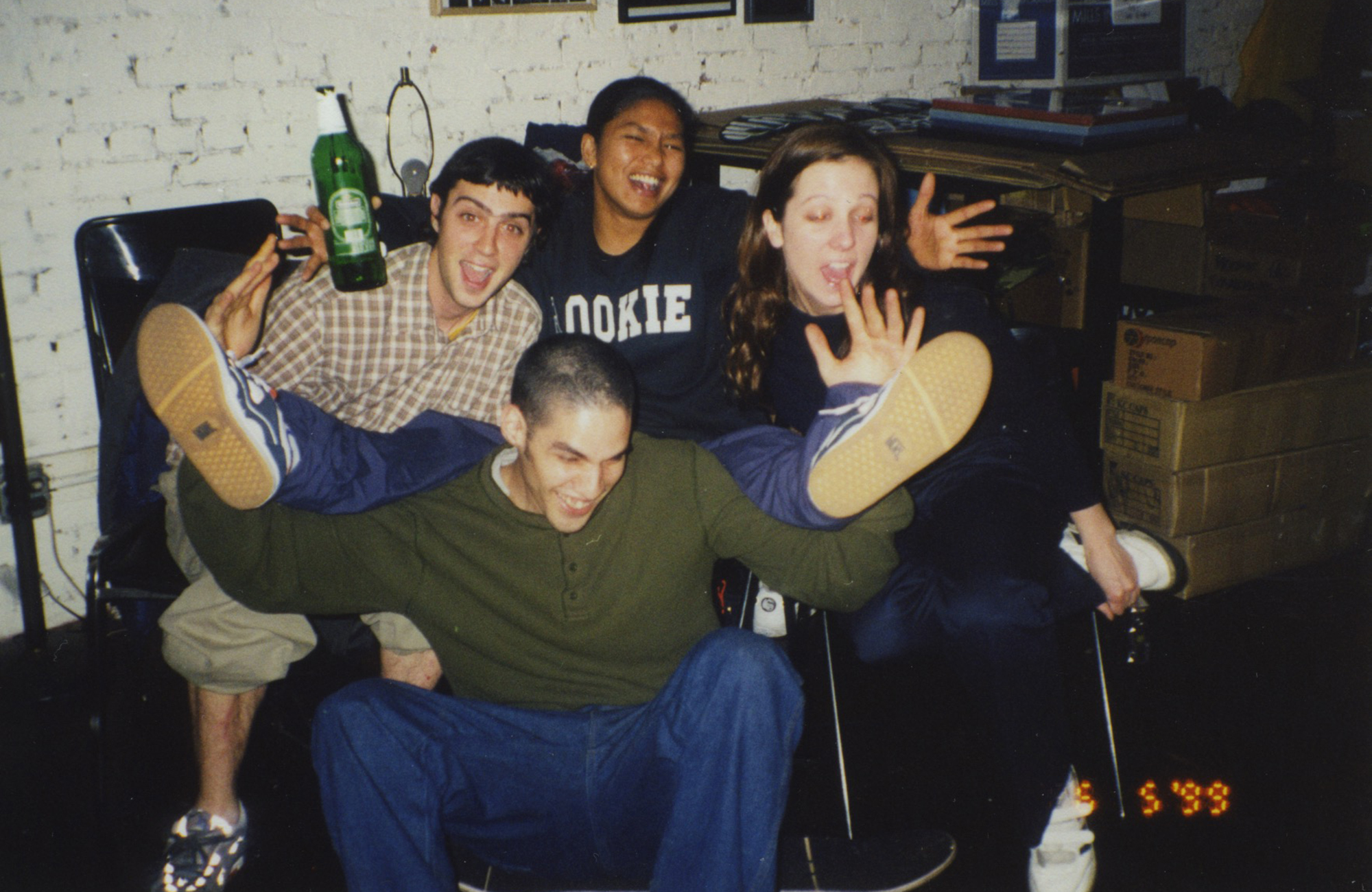 WHO RUN THE WORLD?

The company believed in having an inclusive team from the beginning – with women alongside men on the team. As Catharine explained, “We wanted to create a diverse and inclusive skate company. Creating a way for women to be represented and included in the industry was a part of that. Rookie didn’t see themselves as a “girl’s company,” even though that was kind of how it interpreted by the majority of the skate industry in California. 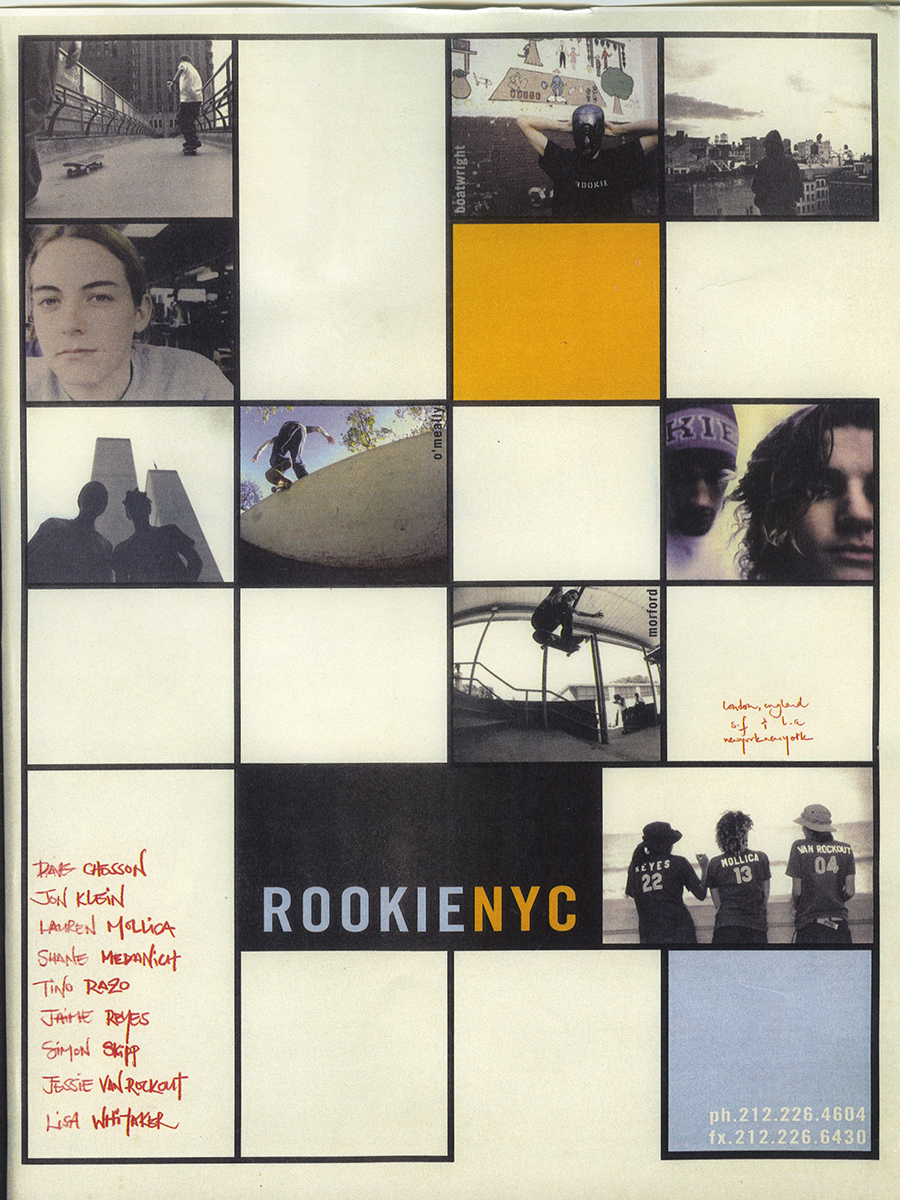 Lisa Whitaker cited Rookie as a huge influence and inspiration for starting Meow Skateboards. Both companies were the catalysts and launching points for respective generations of more inclusive representation in the skate industry. As Lisa explained, “It was so great to be on a company where you were included and felt a part of something. I had worked in the industry for a while and other stuff just didn’t feel like that. Rookie gave me my first chance to travel and go on skate trips. Rookie starting up was at the beginning of wider industry support, that was growing in that era for people like Jaime Reyes, Jessie Van, and Elissa Steamer. Vanessa Torres and Amy Caron kind of caught the last bit of that.”

After Rookie ended and the industry was contracting (economically) “there was a whole generation that didn’t get any real support from the industry for years – Marissa Del Santo, Alexis Sablone, Leo Baker, and Mimi Knoop. It was just like it all turned off. There was no representation on any of the companies anymore. Which is what motivated me to start Meow.”

It was such an anomaly to have a woman-founded skate company at that time. There were some supporters in the industry who were more open-minded and accepting and understood the potential – but largely it seemed it was something that most people didn’t understand because they were looking at it from an insular perspective and couldn’t see the full picture and potential.

Today, it’s easy to see that Rookie helped bring real change to the skate industry. Looking at brands like There, Glue, and Vans, you can see brands big and small putting riders of all genders, sexualities, and backgrounds in one team, just like Rookie did in ’96. While it may seem like the new norm, if it weren’t for early trailblazer brands like Rookie, the skate industry could have looked a lot different today.