MY STRUGGLE WITH DEPRESSION AND HOW WE CAN HELP OTHERS 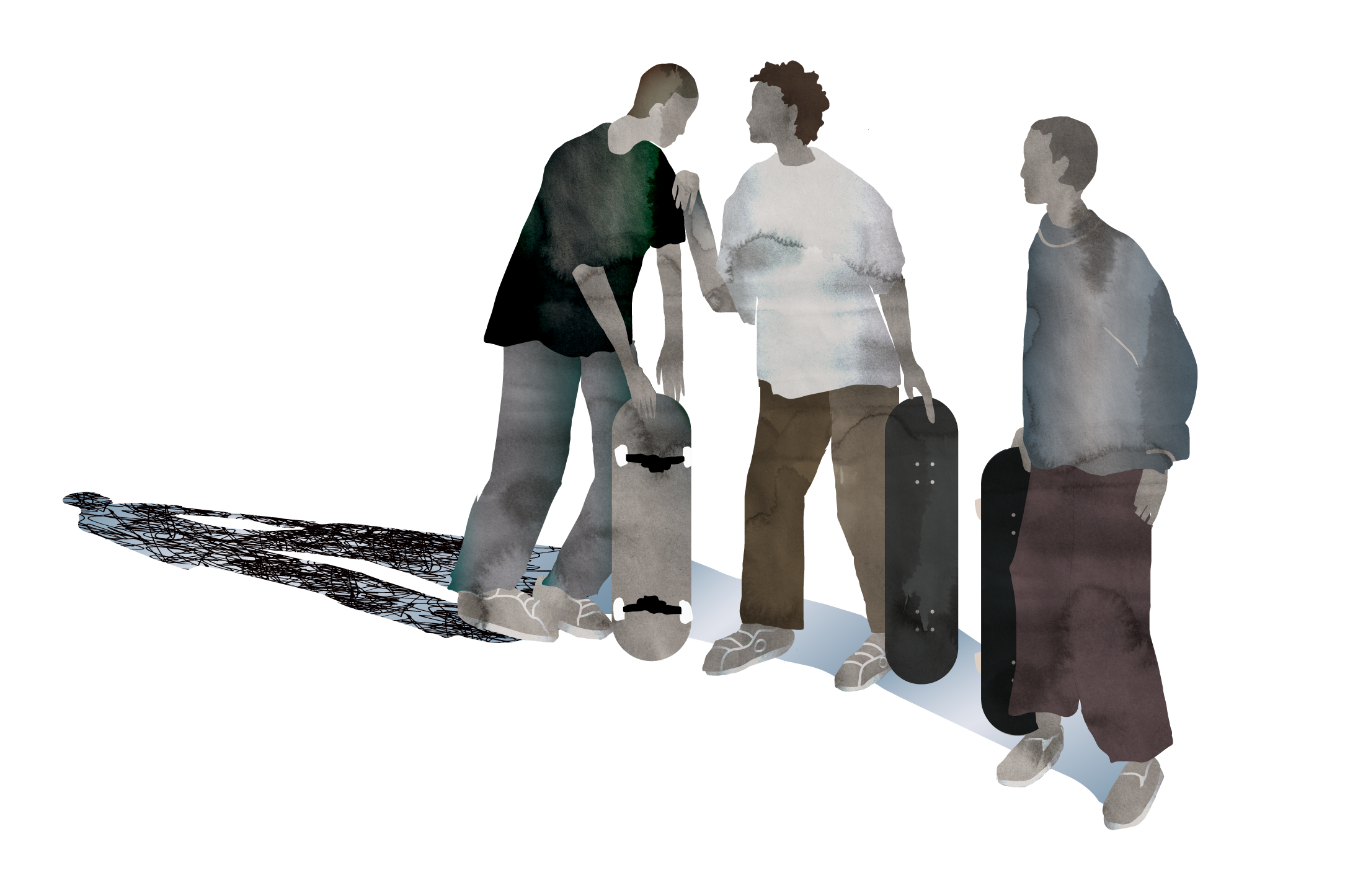 I had just woken up at 4:00 AM, and while I was waiting for my dog to finish his business, I checked my Instagram and saw a few guys posting photos of Henry Gartland. Later that morning all of his sponsors, friends, and magazine outlets followed suit. While lurking slap I found out that Henry had committed suicide. I was shocked that another young, talented skater took his own life.

The next day Instagram stories with the suicide prevention hotline’s number started making the rounds. However, certain pros began to call out their friends and teammates for not being there to help them and for not properly checking on them. That’s the thing though… Does anyone know how to properly help a friend that has depression or anxiety? Do they even know how to tell if they feel that way at all?

My name is Eric Brown. I’m twenty-seven years old and was born in New Mexico but grew up in West Texas in a small college party city known as Lubbock. I attempted suicide two times when I was eighteen years old and survived.

I grew up in a somewhat healthy household where I was the youngest of three. I was a typical middle-class kid. I didn’t have too many real-world issues to contend with until my sister got pregnant at a young age, my parents lost their jobs during the recession, and they began fighting.

While that was going on at home, I was picked on and bullied a lot at school. Even though I was a good athlete, I was a weirdo. Not like eating bugs type of weird, just weird, I guess…

One day a group of kids I befriended got into skating so I picked it up too and it took over my life. We had this indoor skatepark with a skate team that I looked up to. But as time went by, the team I looked up to started to treat me like garbage.

I heard them making fun of me and calling me names. When I found out about that I was destroyed. I became depressed and started cutting my wrists. My parents eventually found out and they had me go to a counselor until they couldn’t afford it.

I started high school, where things kinda picked up. I got better at skating and even got sponsored by my local skate shop. Everyone had told me I could possibly go pro if I worked hard and filmed a lot. It kept me positive and happy.

While I was getting better at skating, my parents lost their jobs and struggled financially and my siblings weren’t any help. The shop I rode for sponsored some of the kids that had bullied me and a girl broke my heart. I was doing well in school and skating, yet life wasn’t that good. 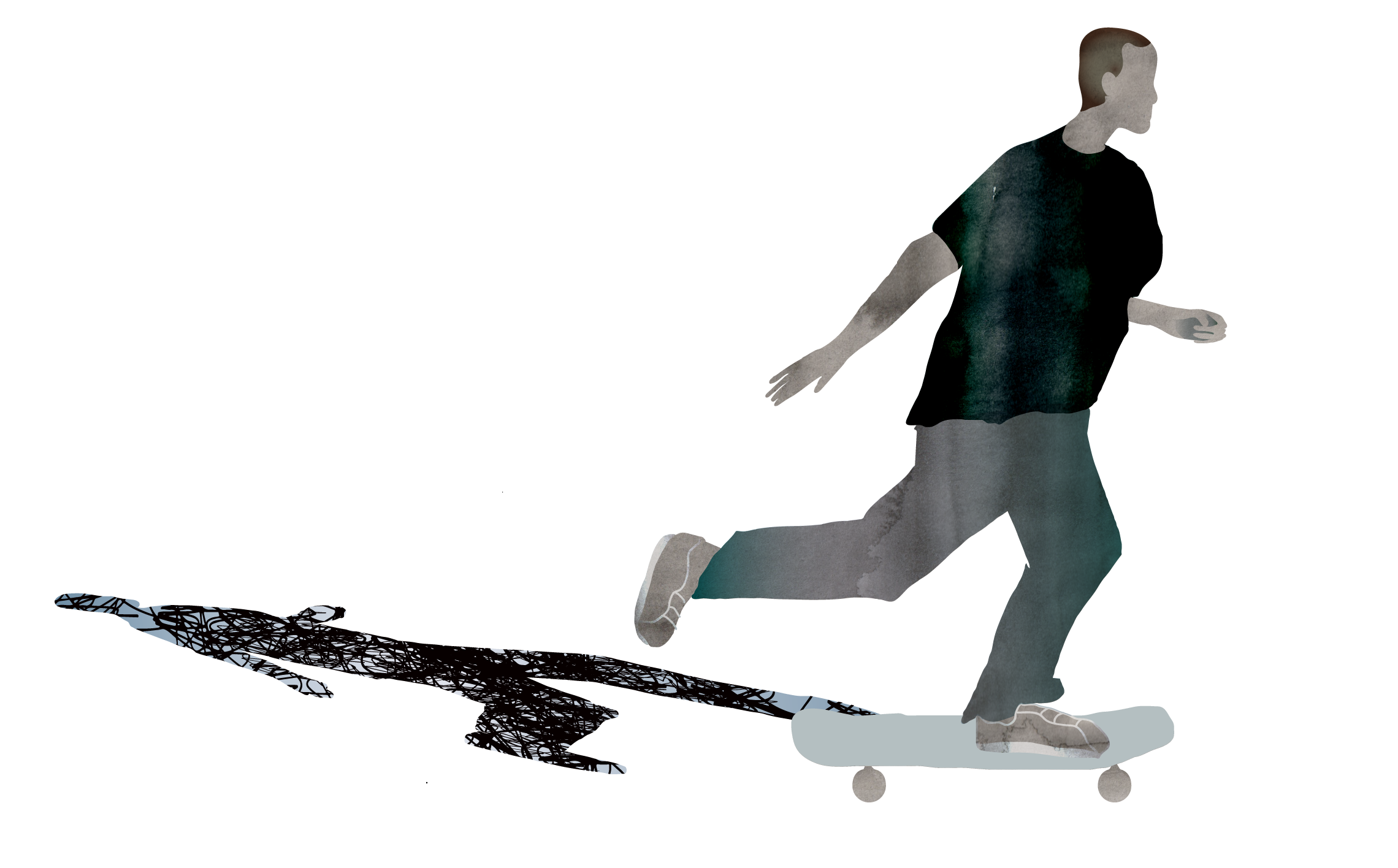 On my first suicide attempt, I took over fifty pills from my parents’ medicine cabinet with about ten different kinds of pills. I didn’t know what they were and I didn’t care, I swallowed all of them and went to bed. I didn’t leave a note or anything… No goodbyes… Nothing…

I woke up in the middle of the night. My body was in complete and tremendous pain. I could barely move. I managed to crawl to the bathroom and throw up in the toilet. I struggled to make it back to my bed. The next day I woke up at three in the afternoon. My body was still in pain and I couldn’t eat. My parents didn’t notice anything suspicious because at the time I often stayed up until the early morning and woke up late. They didn’t even hear me throwing up.

“I couldn’t believe that I survived and no one noticed.”

I couldn’t believe that I survived and no one noticed. It was unreal. At first, I thought it was a sign for me to continue to live and I became a bit cheerful, until the next week…

Even as I sit here, I can’t remember what led up to the second attempt. I did the same thing only this time I took sixty pills and the pain was so much worse. Yet I still survived.

My parents eventually found out and were devastated. I told some friends about it and they couldn’t believe it either. I tried to do some spiritual research on life, and even tried to chase the dream of being a pro skater. It didn’t work out so a skate homie helped me get a job at his girlfriend’s landscaping company. Everything was going great until the landscaping company shut down and I was left unemployed and fell behind on my car payments.

So I was back to debating on whether to take my own life. I had to do something so I went to my physician and talked to him about what was going on. I was afraid if I didn’t get something figured out my next attempt would be my last.

Then the process of healing began. Five months have passed and I’ve been on medication. I started my own landscaping company to help afford therapy and health insurance and it’s starting to grow slowly. 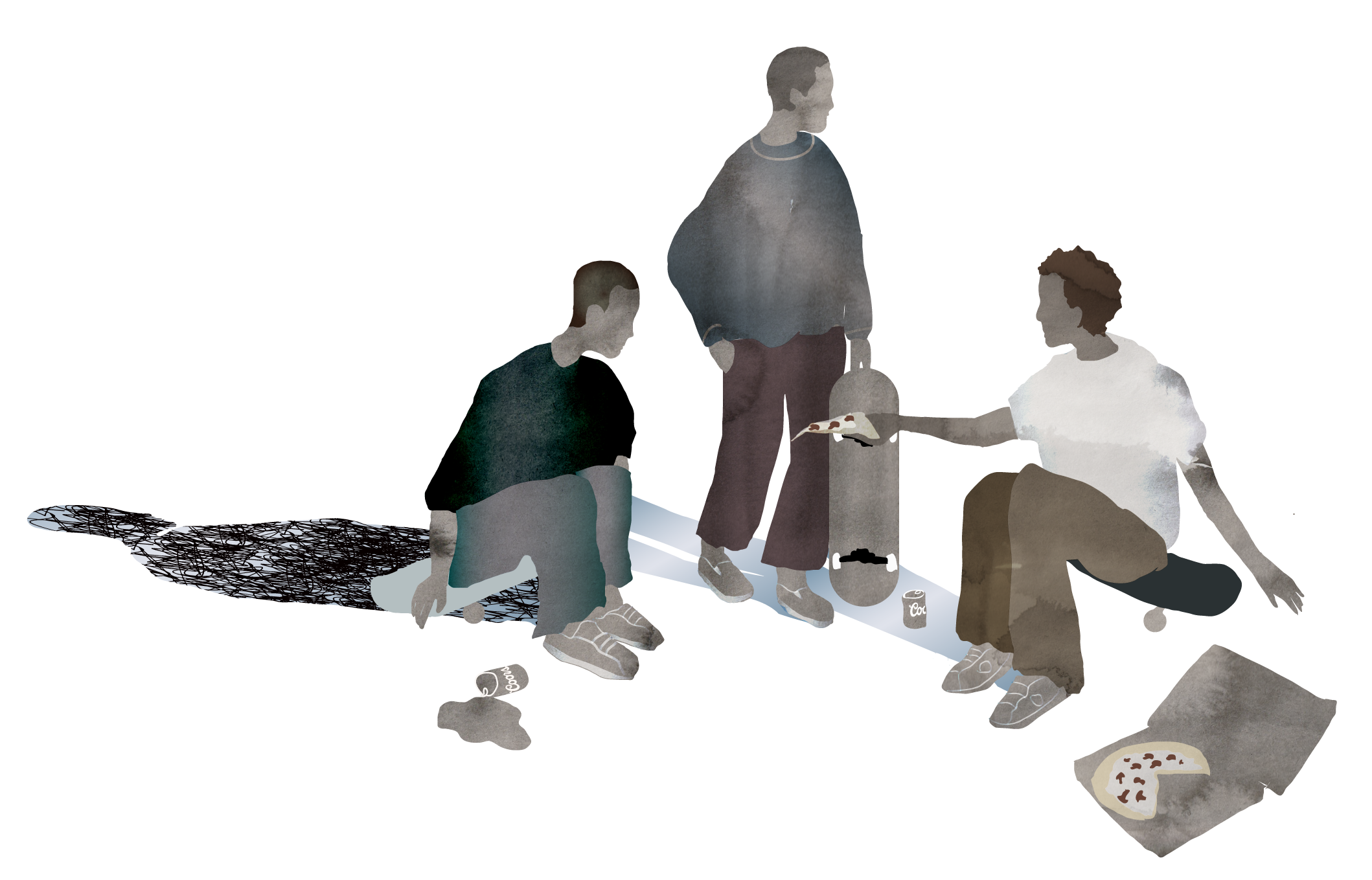 How To Help as a Friend

John Rattray, former Zero pro skater, has had his own struggles with mental health and, unfortunately, lost his sister to suicide. This led John to establish “Why So Sad?” an organization that raises awareness for mental health amongst skaters. To help out a friend that is struggling with suicide, depression, or mental health, Why So Sad? recommends ALGEE, an acronym used in mental health first aid that outlines steps to help someone out. There are no perfect, silver-bullet, solutions for mental health issues but it at least provides some clear actions we can take.

Assess for risk of suicide or self harm
This is about trying to look out for our friends. When we notice that their behavior is changing or they’re starting to isolate themselves, it’s important to try to reach out to them. Sometimes it will be hard to see a change in their behavior. But, oftentimes there will be a major change like them no longer wanting to partake in an activity they used to love, like skating. However, this isn’t always the case. Rattray says that “It’s always worth checking in and seeing if there’s anything deeper going on and approaching it with an openness to learn and help rather than to judge or project fear or disdain.”

Listen non-judgmentally
When our friends are struggling they’re going to have a lot on their chests and they might not want to open up right away. Do your best to be there for them and make it clear that you are there if they need someone to talk to about what’s going on. It might be an awkward conversation, but don’t be afraid to be straight up and ask “Are you considering suicide? Have any thoughts like that come into your head?” It’s hard but vital.

Even if they refuse your help, keep your hand out for them. When it comes to repairing a life, it’s gonna take a lot of patience and understanding. It’s a serious role and it’s not easy. Let your friend tell you anything and everything that is on their chest.

“Do your best to be there for them and make it clear that you are there if they need someone to talk to about what’s going on.”

Give reassurance and information
Let your friend know that the terrible feelings and thoughts they’re having are common responses to this insane world. They are not alone by a long shot in feeling this way, but most importantly, it is completely possible to get through it and get back to living a happy and normal life.

Make your friend aware that you are always there for them. Don’t blame them for the way they feel. Our brains and bodies react in different ways to circumstances and stimuli that are thrown at them and this is just the way that they react. Knowing this is vital to understanding what they’re going through.

Encourage appropriate professional help
As much as you can, support your friend in getting the help they need. Professional help, such as doctors, psychiatrists, and therapists, are important options, and taking that step can certainly help. Getting them this help might require you to research local organizations or individuals who can provide this help to your friend. As much as you’re able to, this is an idea of how you can help to lighten the load for them.

Primary care doctors, mental health professionals, and psychiatrists are all good first steps to take when dealing with emotional and mental health crises. People get through this every day. It takes time and it’s not plain sailing, but you can do it.

Encourage self help and other support strategies
Try to be there for your friend and help them when they need help. You can check-in and make sure that they’re going to their doctor’s appointments, visiting their therapist, and taking their medication if they’re prescribed. Do your best to monitor their behavior and see if they’re doing well. 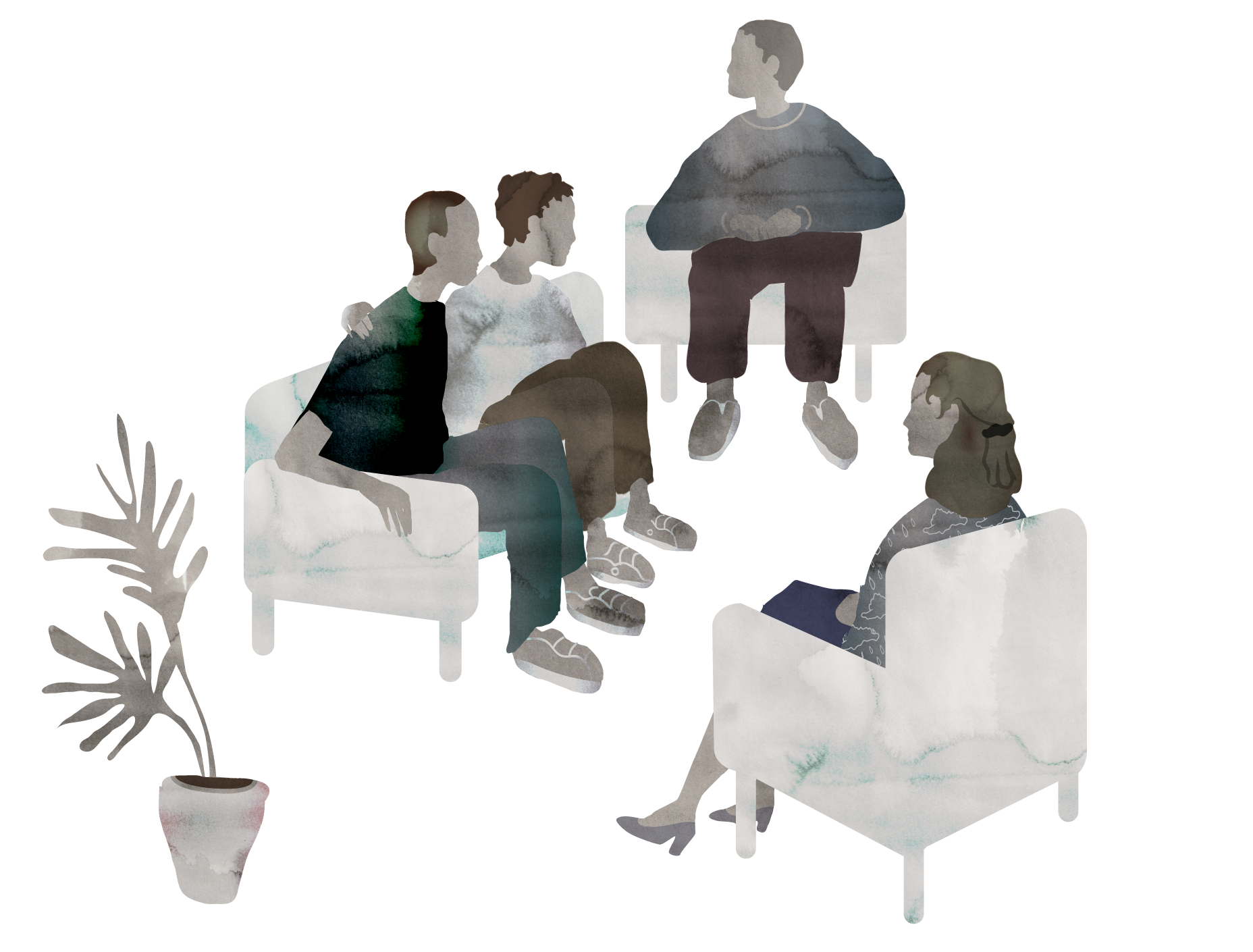 My Message To The Friends

I’m not gonna lie, this is a hard thing to figure out. For some people, everything seems fine in their world. They’re making rent, eating well, and have a good job. But really everything is not alright. There might be family issues, substance or alcohol abuse, issues with friends, or millions of other problems that might arise in life.

You could have been born as the child of Elon Musk or a child in low-income housing whose parents are addicts or abusers. Or you could’ve been born right in the middle, trying to make the world into a better place or just trying to get by. Even if you keep moving forward, it could be towards heaven or a cliff. When we walk beside our friends, the more we give open, honest, consideration of the subject of mental health, the better we’ll get at being able to see the path they’re heading down.

If we see the path will end their life, whether it’s by the unnatural forces of the universe or their own actions, hopefully, we can help them course-correct when things are going astray. Try not to judge, try to stay open-minded, and let’s try our best to help each other grow into people who can withstand the world but also have each other’s back when we need it the most as well. Let’s not force each other to drink, smoke, and skate the pain away. It doesn’t work like that. Through love and compassion and a helping hand—not toxic positivity or a “hustle and work hard” attitude—we can help our friends. Try to understand that, please.

Help is out there if you need it. Here are some resources you can reach out to based on your location: