A CHAT WITH LUDVIG HAKANSSON, THE OLDEST SOUL IN SKATEBOARDING 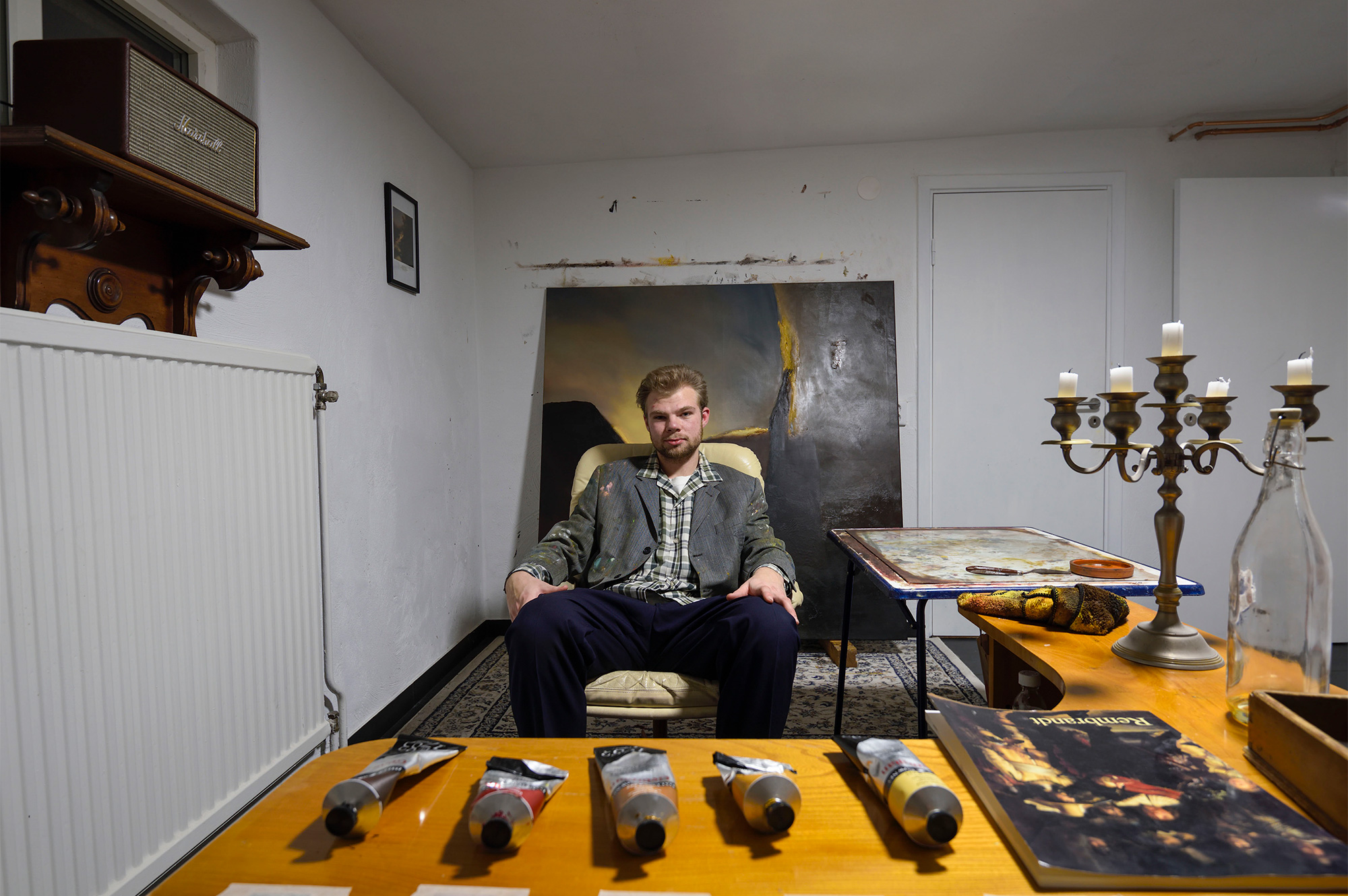 Browsing through Instagram, you’re likely to come across people like Ludvig who seem to elude simple categorization. Is he a skater, an artist, a model?

A lot of times as skaters, we look at personalities like this with some level of skepticism—think Evan Mock or Ben Nordberg. Some of the most outspoken bunch might call them clout chasers who are trying to ride the hype of skateboarding, but that is until you realize they actually hold their own on a board and have a deep understanding of the culture.

There’s a lot of careful curation going on with these types, from their outfit choices to the backdrops of their photos, so to demystify the persona, we wanted to hit up Ludvig to see what he was all about. Turns out, he really lives the life he puts forward.

You have a pretty large Instagram presence, is there a specific time where you remember things taking off for you?
I guess it was when I became friends with Jim Greco and Jeremy Klein. And when Greco put me in Jobs Never and The Skateboarding of Leandre Sanders and Ludvig Håkansson. I feel honored being in Greco’s movies, he’s one of my favorite skaters. Also, when I rode wide 90s shaped boards, a lot of people seemed to like that.

Your Instagram page gives off an old soul vibe. Would people say you’re like that in real life too?
Haha, yes I think some people might say that actually. I’ve always been into vintage clothes. When it comes to skating, I’ve always been interested in the history of it. Especially the setups. I’ve skated a lot of boards that have the same shape and size as the boards did in the late ‘80s and early ‘90s. They’re fun to skate. I also like learning about art history. Finding out about different artists and different painting techniques of the past. Goya’s black paintings, for example, have really caught my attention.

Why the loafers and blazers?
My grandpa has been a big inspiration for the way I dress — looking at old photos of him. In fact, some of the blazers I wear are his old ones. Also seeing Greco skating in jackets and loafers is always very inspiring. Me and Jim go thrift shopping together whenever I’m in LA, it’s a lot of fun.

Since you’re so into things from the past and older things, are you more attracted to old people?
That depends on what you mean by attracted. I usually get along better with people older than me. 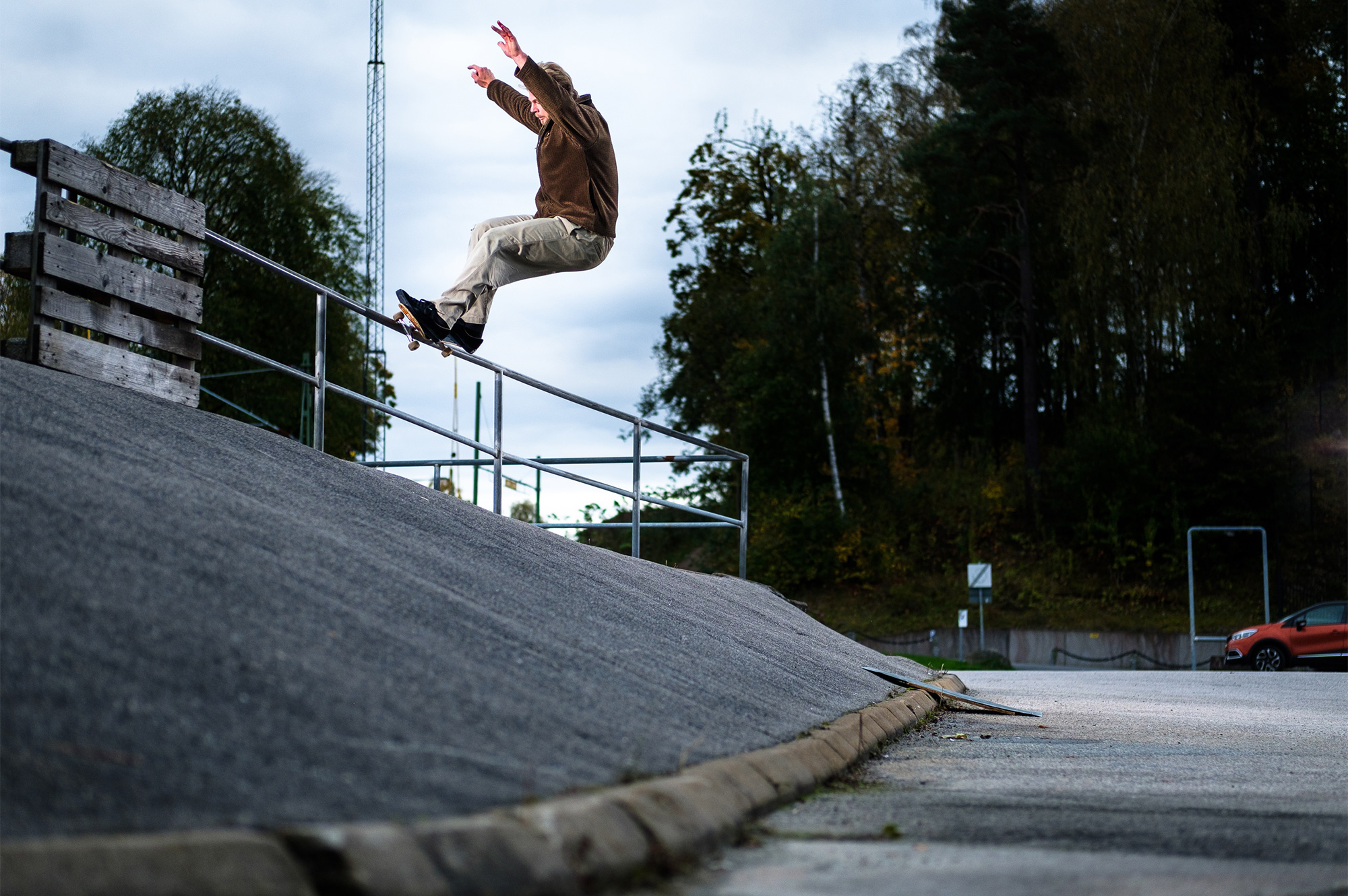 What’s your general impression of American skateboarding attitudes vs attitudes of skaters back home?
One of the things I like about skaters is that we’re all passionate about skating and can easily become friends with other skaters. It doesn’t really matter what country you’re in. When it comes to attitude, there’s always going to be some people you get along with better than others. I’m more of an introvert than an extrovert, for example. As for vibes between the two, other than the spots I don’t think there’s too much of a difference.

You seem to have an affinity for American artists, like Jack Kerouac and Willem de Kooning, are you inspired by American culture? Would you ever move to the states?
I’m a big fan of Jack Kerouac. He was a great writer. He was also friends with some of the painters I admire — Franz Kline for example. I do think I am inspired by the American culture. The abstract expressionism movement happened in New York. I’ve spent a lot of time listening to them talking about their work and I think it has influenced me. To be honest, I don’t think there seems to be a lot of culture left. The world is becoming more and more global. For better or for worse. I do think I would enjoy living in LA — good people and nice weather all year, and lots of fun spots to skate.

”I don’t think there seems to be a lot of culture left.”

Sweden is a skate mecca itself, with skate schools like Bryggeriets Gymnasium. Do you have plans to move to a larger city like Stockholm or Malmo?
Yes, Malmo is great for skating. I don’t think I would like to live there though. If I do move some day, I think it will be somewhere outside of Sweden. There’s more spots in bigger cities.

It’s been pretty good these last couple of years, living here, working and saving up money. I’ve gone to LA whenever I could get some time off work. It’s always a good time skating and hanging out over there. I haven’t done any traveling this year though, due to the virus.

As for skate schools, I can’t really be sure about this since I never went to that school. But, I have friends that went there, and from my understanding, most of the people who go there don’t really think about whether they will have a future in skateboarding or not. They simply all just love skateboarding and want to skate and hang out with other skaters as much as possible.

Would you ever skate for a major brand like Nike or Supreme?
That’s difficult to say. It depends on if it’s a brand I like. Major companies are usually more concerned about pleasing a broader public. I think it’s super sick when a company makes a product knowing that it probably won’t be a big-time seller but makes it anyway because the owner really wants to see it being made. Not compromising for the market, so to speak.

Walk us through a typical day for Ludvig Håkansson.
Well, if it’s a weekday, I get up and go to work. I do bricklaying for a living. When I get off work, I’ll either go skate or paint. I got this ramp I’ve built that fits perfect in the trunk of my old Mercedes. I usually drive around to my favorite local spots. There’s a couple of fun, steep banks around here. There’s also this ping pong table at a school that’s a lot of fun to skate with the ramp.

During the weekend, I usually get up around five and paint for a couple of hours. It’s pretty much always painting. I enjoy painting in the early morning. Then I go back to bed for some more sleep. Later in the day I’ll go skate. In the evening I might read for a bit. Usually Nietzsche or Schopenhauer. I like the feeling of knowing most people around me are still sleeping, plus the feeling of having the whole day ahead of me. 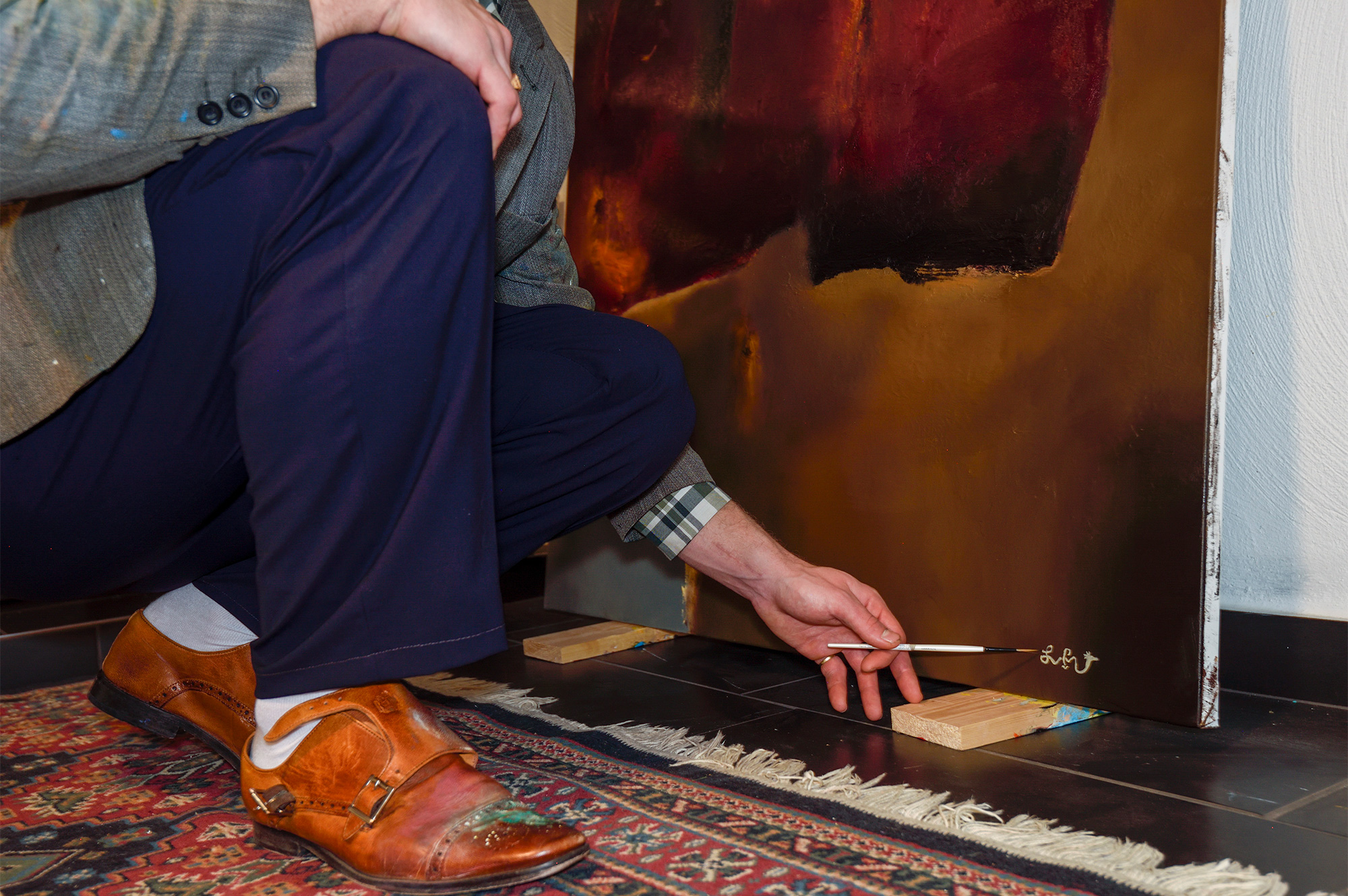 Where did you learn to paint?
I’m self-taught. I’ve learned a lot of things from interviews and lectures with people like Clement Greenberg and Frank Stella. The Baroque painting is something I started taking inspiration from quite recently. I thought it would be interesting to combine painting from the past with modern painting. So far, I’m happy with paintings I’ve made this way and it seems to really work for me.

There’s this movie that I’ve learned a lot from called Painters Painting by Emile de Antonio from 1972. It’s about the New York School painters talking about their work in their studio. It’s really good. I don’t think skateboarding plays any role in my painting.

I’m into abstract expressionism. I like to paint on big canvases and prefer working in oil. I’ve been using the palette of Rembrandt lately, his colors really seem to work for me. The paintings get this vibe of an earlier time, which I like. I’m a big fan of the Old Masters. I don’t really do figurative painting, but I get a lot of inspiration from them — especially The Cranachs. Just as I get a lot of inspiration from the New York School painters — Franz Kline, Robert Motherwell and Willem de Kooning in particular.

I’ve been part of a few exhibitions, one solo. I’d like to have more exhibitions in the future. I focus more on developing my painting than on publicity. There’s a good quote by Larry Poons I really like — “Success is in the studio. That’s the only success there is. The only other type of success is business: it’s not art.”

It also seems like you’re really into poetry. When did you first start writing?
I bought a typewriter about two years ago. It’s an Underwood from the ‘30s. I don’t write that much but I give it a shot every now and then. 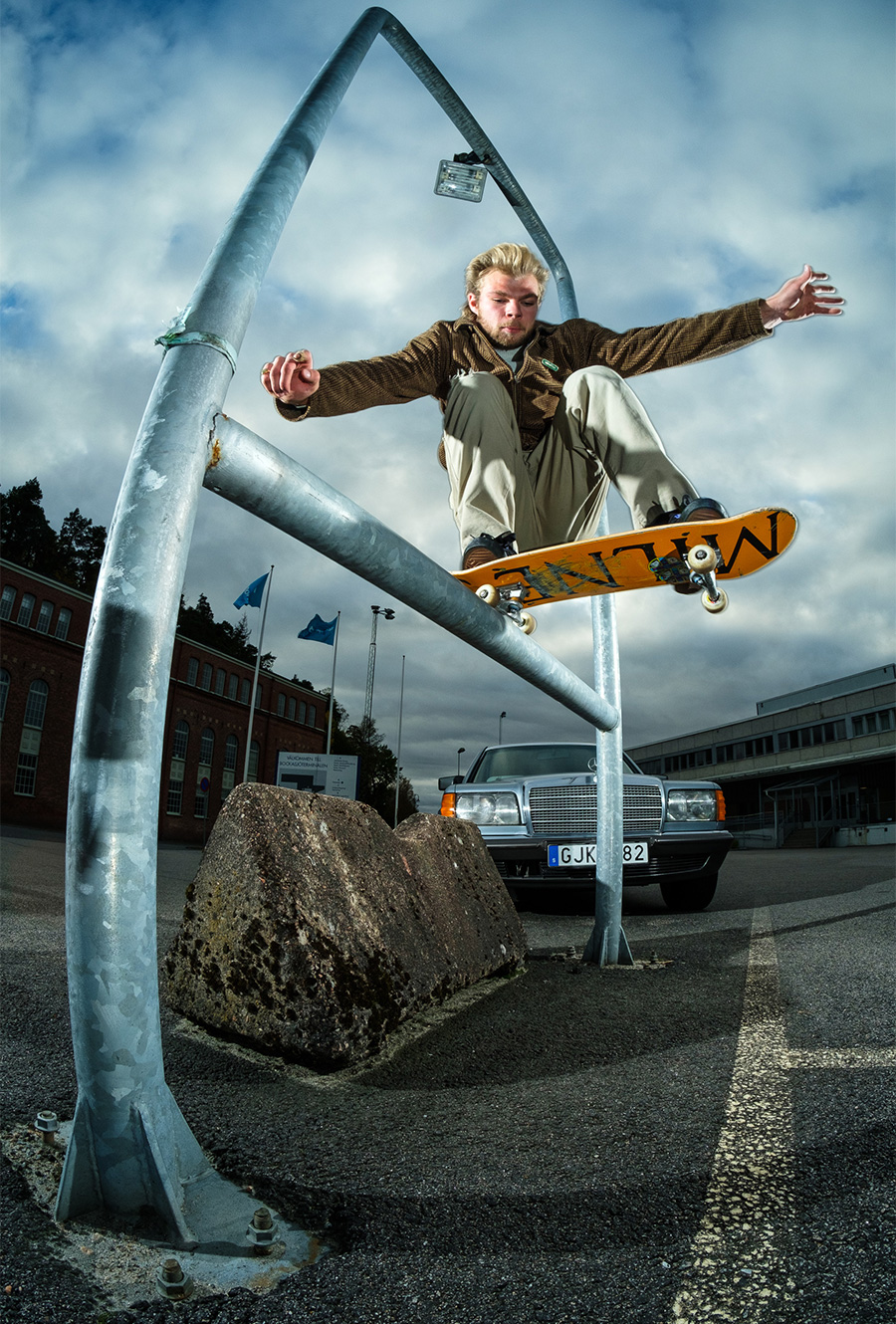 If you could time travel and have dinner with any guests, where would you go and who would you eat with?
That’s a great question. There’s a few that come to mind. I think that I would go to the Cedar Tavern bar in Greenwich Village in the 1950s and have a meal and a couple of drinks with Willem de Kooning. We would discuss painting and what it was like for him moving to America. There’s also a great chance I would see many of my other favorite painters in there since they usually hung out there together.

Or I would go to Frankfurt in the 1860s to visit Schopenhauer. I’m interested in his philosophy. I would discuss art and instincts with him.

Maybe I would go back further, to Wittenberg in Germany around the 1520s, and visit the workshop of Lucas Cranach the Elder. There’s a language barrier here and they would probably not let me into the workshop. I think I would try to sneak in and study what they were doing without being seen. That workshop was something else. He and the employees made prints, painted portraits, etc, very rapidly, and the result was always very high-end. His son Lucas Cranach Jr. took over the workshop later and was also a great artist.