IN DEFENSE OF THE VARIAL FLIP 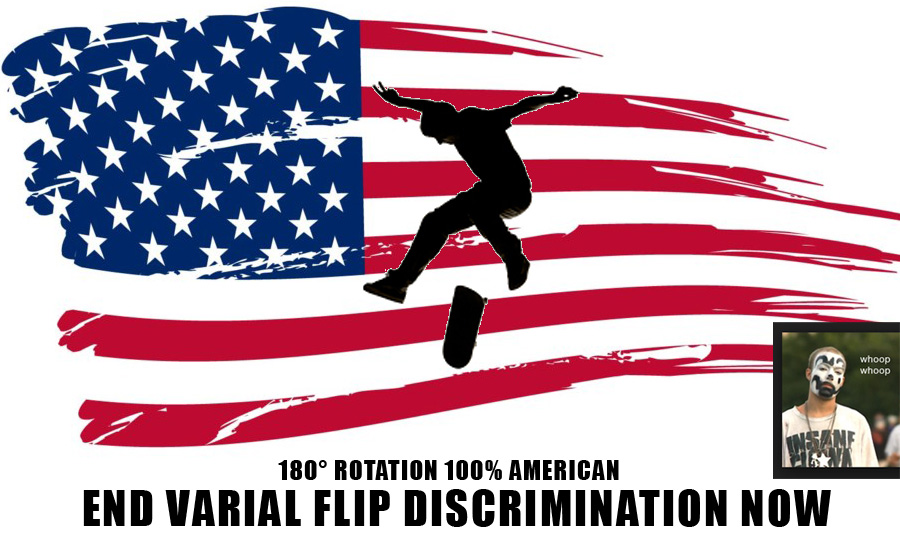 We need to let go of these prejudices. Skateboarding will never be more ready: infamously opinionated magazines write “there are no rules in skateboarding,” Lance Mountain said skateboarding is about more than “being good,” boneless ones and no-complies are back en vogue. If there’s any time to declare varial flip amnesty, it’s right now.

Let’s get the ugly part out of the way: Varial flips can be the worst. We all agree there. But they aren’t the only trick with high “suck” potential.

Remember hardflips? People don’t hate on that trick unless you do it a certain way. I don’t know about everybody else, but I’m not really able to decide, “Oh, I want my tricks to look like…” whenever the skate punditry make their weird decisions about what’s cool. But that’s the point: skateboarding isn’t about looking like everybody else.

Perhaps it’s due to increased numbers of skateboarders taking cues from sports. But skateboarding isn’t like football, where you do drills and follow a specific routine in order to out-drill and out-routine another, symmetrical group of players. It’s not like ice-skating, where certain moves executed in a certain way are worth more points than other moves performed other ways. It’s not a game you can be the best at, or win the most.

”Forgive the varial flip, and let it into your heart.”

In fact, some of the tricks we love the most have serious, serious potential for awfulness. Weird mobbed kickflips that look the worst when some park rat tries, look a lot like the best weird kickflips when it’s the Gonz. Nobody can 360 flip like Jason Lee, but that hasn’t stopped anyone, for better or worse. That’s the whole point, right?

Look at it this way: Rodney Mullen says isolation was key to his learning and inventing basically every trick you’re still trying to learn today. It makes sense, considering how awful skateboarders can be to each other when it comes to trick selection. And it explains why skateboarding got so boring for a while – as skate media started hitting YouTube, skate culture transformed from small pockets of people around the world learning how to redefine the world around them into a sporty toy lifestyle marketing gimmick.

Most of us turned to skateboarding because there was some freedom, even lawlessness, in it. So stop trying to make rules about what’s cool and what isn’t. Don’t get mad. Learn new tricks.

Forgive the varial flip, and let it into your heart.