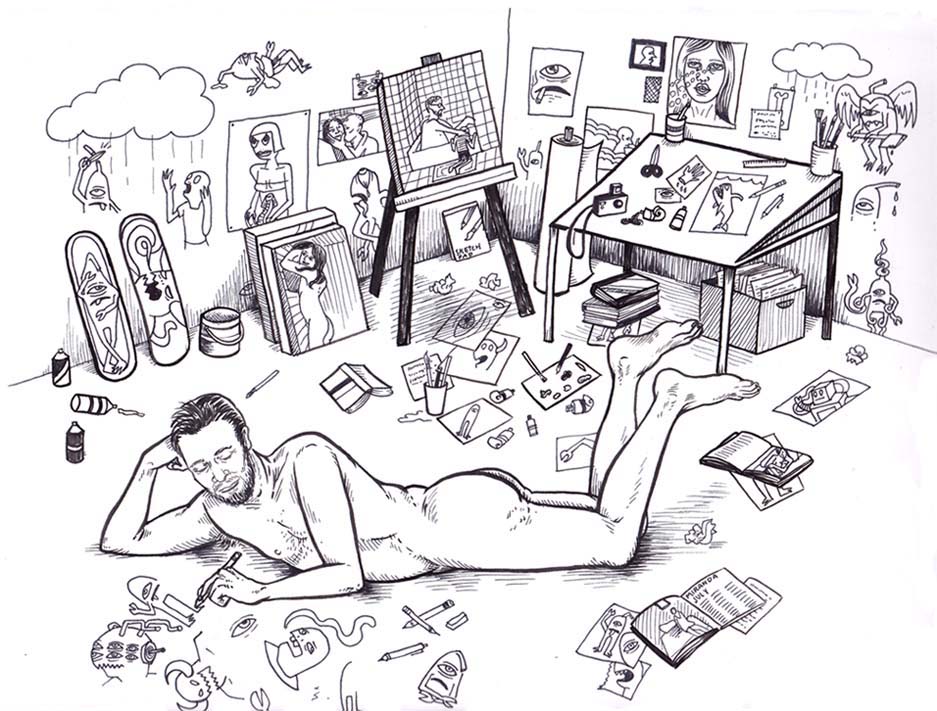 What started as an interview talking about some of Ed’s photography quickly just turned into a bunch of sex questions because A) he already has a ton of serious art interviews and B) sex is always more fun. Plus, after scrolling through his photography, it’s hard not to talk about the abundance of sex related shots. Thankfully he tolerated our dumb questions and even brought up some 90’s skate tour memories – And in terms of being open and honest about it all, the Toy Machine big boss man never fails to disappoint.

There is this story of “stations,” meaning jack-off stations, and certain rooms had more “stations” than others. A station was a space between the beds in a hotel room where you could see the TV but another guy who was laying on the floor on the other side of the bed couldn’t see you. A good room might have 4 stations, three spaces around the beds, and one in the bathroom if the TV was still viewable from there. We always joked about all jerking off while watching a hotel room porno but never did it. I know people who have though.

How did poor Elissa Steamer deal with all the male sexual angst during these trips?
Elissa wasn’t ever poor. She laughed at all the guys’ stupid male stuff. She would see the magazines and laugh. We protected Elissa. One time a kid came up to us and made an inappropriate comment, like, “Hey, you guys get to bone Elissa?” And Me and Brian Anderson both looked at him with the most dire faces. He instantly knew he didn’t just cross the line, he jumped the line into hostile territory. BA said, “I think you should leave now.” and the kid ran off.

How much sex happened on Toy tours? Did Elissa pull her fair share?
Not only did she not “pull her share,” the guys didn’t either. Everyone just talked the talk, but nobody ever walked the walk. We were too busy skateboarding to be trying to talk girls (or boys) into beds. Panama Dan in the old Toy Machine days is the only guy who really hooked up with girls while on tour. I couldn’t find the van keys one time, and peeked in through the tinted windows to see if they keys were locked inside and there was Panama with a demo girl bouncing on him. Maybe Maldonado did once when we were close to his hometown. But our main concern was skateboarding. All we did was drive and skate 24-7, stopping to eat once in a while.

Have any of your riders pooped their pants on tour?
It’s happened. Pooping in hotel drawers, pissing your pants in the van. I’ve seen it all. But my own stories are the worst. I crapped on the sidewalk in front of my house because I couldn’t make it the 10 more paces into my house. I was walking home from the store. Every couple of steps I had to stop and use all of my might to hold it in. Finally I knew it was coming, and just pulled down my pants and let loose right there. I’m not sure if my neighbors saw anything.

What’s the most outrageous Toy Machine tatoo you’ve seen?
One of the Frederickson brothers has one on his chest. I had a girl come up to me at a book signing in London and ask me to draw a transistor sect on her forearm. Then she disappeared and came back half an hour later with it completely inked in, including my signature!

Have you ever met someone with a Toy tat on their genitalia?
There’s a girl Ashley who has Toy Logos very near her baby-maker. And this girl has one on her back. I don’t know of any penises or vaginas being tattooed. There is a kid in Florida Will McGaha who is covered in Toy Tattoos. And a guy in Brazil who is competing with him to be covered in Toy tattoos. They are the gnarliest. I can’t believe it. I’m always honored deeply and freaked out that they like it that much to live with it and see it in the mirror every day.

Has anyone tried to sneak meat into your food?
I don’t know. Maybe. It wouldn’t cause a reaction from me. I’m not one of these vegans that treats meat like Kryptonite. It’s just a dead animal. And if I ate it I wouldn’t get get sick. Humans are omnivores. I ate meat for 18 years before I went vegan. I was eating Weinerschnitzel, Arby’s, or McDonalds every day. I think that’s disgusting now, but I wouldn’t vomit like many vegans claim. So I’m not sure if anyone tried to do that to me. I get all the jokes about eating twigs, or being a pussy for not eating a burger. I love a good vegan joke. Many of us are quite ridiculous.

What about Drugs?
Not to my knowledge either. I for sure got contact highs from all the weed smoke in the van. We have a stoner van and a non-stoner van on tour now. But I’ve never been slipped LSD or anything. I think I would remember that. I have always offered my team that if they make me a vegan pot brownie I will eat one. But of course they’re always way too lazy to actually make a batch of brownies much less vegan ones. So though the offer has been on the table for years, I still have never eaten one.

I have seen quite a few full naked shots that you have taken of your wife, with different hair styles down there. Some unkempt, one with a landing strip and other times, more clean. What is your personal preference overall?
The kids these days, and porn/fashion is obsessed with hairlessness. I just read in the NY Times that the male fitness magazine Men’s Health, for example, hasn’t featured a hairy-chested model on its cover since 1995. Deanna has never had a “Landing strip” but she may have trimmed a bit too thin before. She shaved it off once. She has always has a pretty regular triangle type bush. She’s a grown woman and should have some hair. I don’t have a preference, it’s her vulva, she can do what she wants with it! I’m covered in hair down there.

You are a pretty quirky guy. Does that translate to the bedroom too? Have you ever had sex that involved another man?
It must all be an act. My sex life is very normal. No extra people needed.

What’s your favorite position?
We have been married 20 years and are both still happy. We are beyond “positions.”

Have you always been voyeuristic?
Yes. I love watching people. I think many photographers have this problem. I did a show called Sado-Voyeurist in Philly once. I wonder if anyone would like me to come over and photograph them having sex? This interview is dirty, it’s all your fault.

Do you feel old?
Some days I do. In skateboarding everyone seems to stay 20 years old. But in regular life I feel normal. I’m only old depending on your perspective. Being 39 is about halfway through life. I’m in that middle zone. Not too old, not too young. I feel great. But when I’m around 20 year olds, I can easily start feeling sorta old. My references are archaic. I don’t know more than half the bands on Saturday Night Live. What is a Ke$ha? And should I care?