A STONED REVIEW OF “NOT ANOTHER TRANSWORLD VIDEO” 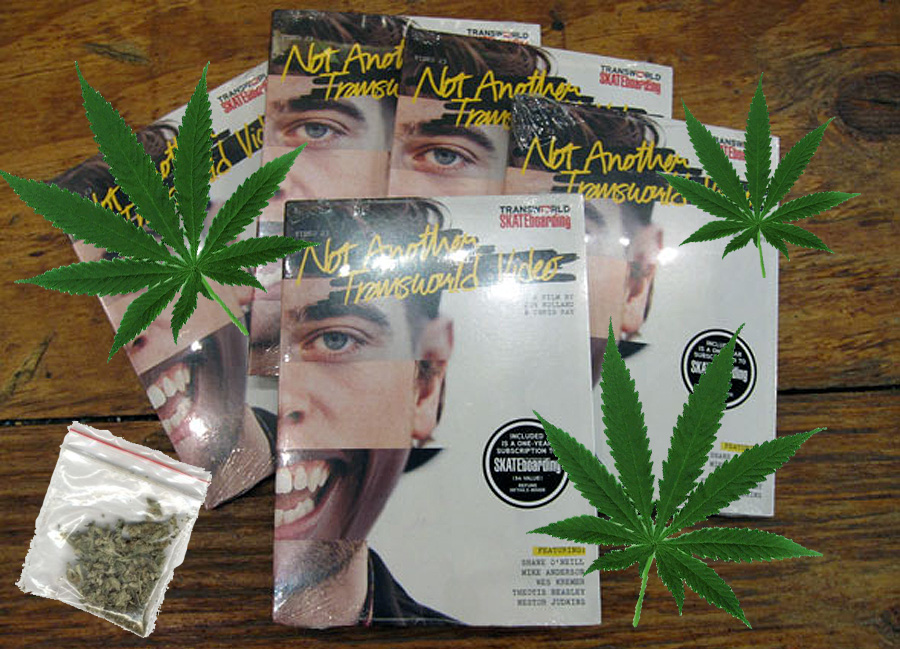 Alright, kinda hyped for this……….here it goes. Nice, right off the bat a giant fucking Monster logo. Ok, here it goes……….a little type writer montage. I guess Chris Ray is trying to metaphor how far back he is in the video production world. Oh shit! Unorthodox montage is first part! Good……get this shit outta the way. Damn, pretty much every trick could be an ender for a video part from 1995-2005………crazy. Having a pretty hard time telling people apart, they should really invest in some fucking name tags or something when they go out filming. In a world of 5,000 pros and another 5,000 popping out the womb as I type this it’s pretty difficult to weed out Austyn Cookiecutter from Bobby Bumblefuck when they all skate the same. This song reminds me of something I’d hear in Pac Sun when I was a kid shopping for discount skate shoes…… 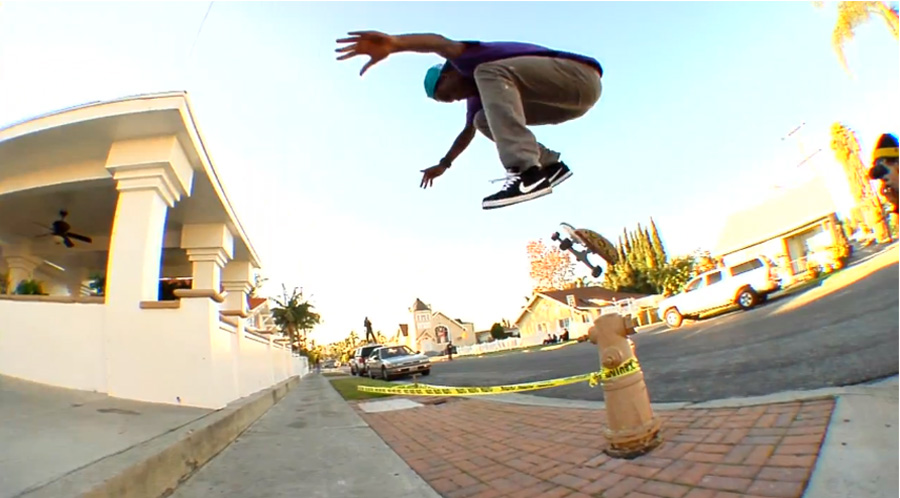 Rap video? No! It’s THEOTIS! The most irrelevant skater I can think of….or can’t think of. Honestly, he’s so fucking distracting. And basing your entire part off a viral internet video? God damn dude, is this what lack of hate does? Makes you unable to siphon bullshit from reality? I’m sorry, but no brownie parts for this dude being super nice towards everyone. He just seems to come off as a giant gimmick…..not sure if it’s the 34 sponsors he has, or all the bright colors he wears. Lots of double flips…..gay. Did I mention Transworld used the edited version of the song? I mean is Theotis so nice he doesn’t want the tweens buying this video to be exposed to foul language? Jesus tap dancing Christ, it’s like Chris Ray is the king of diluting cool things. He’s like an old man who can’t get it up, but instead of Viagra ruining skate videos gets him rock hard. This dude is so generic it’s unreal, after 3 seconds I forget the trick he just did. Sucks he’s such a nice kid……oh well, fuck you, bro. THAT was his ender? …….nevermind, I already forgot. 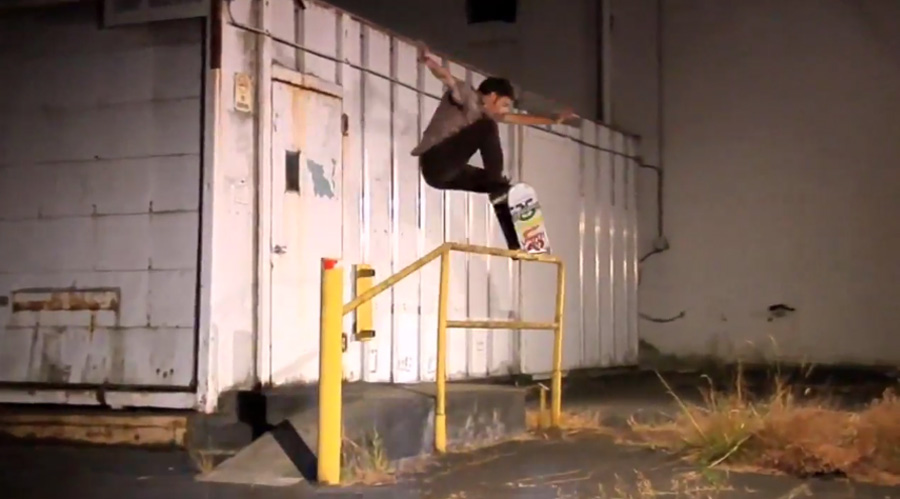 Judkins. I’m a big fan of this dude, hopefully this part washes the shit taste out of my mouth from the first 8 minutes of this video. Maybe Chris Ray plans on making a backwards video, with all the shitty parts first building up to a grand finale………made up most likely of shit, knowing him. Well, so far so good….. My only problem, this song fucking blows……..is this “Do The Twist”? Like what the fuck…..Hellen Keller pick the soundtrack? Kids Bop? Radio Disney? Christ……Mr. Ray should at least take Nestor out on a date first if he’s going to fuck him this hard. This dude makes me want to loosen my trucks…..stoked. This is turning up to be one of the better parts I’ve seen in a while, too bad no one will give a shit about Nestor because he has actual style and not a gimmick. If you started skating after 2005, fuck you. Nestor kids (if he’s got him, a man this bad ass must be pretty fertile) are going hungry because you think Corey Kennedy should be pro for Girl. Every time I see Corey Kennedy it reminds me of a Lax bro from High School ripping away in his Jeep blasting Sublime. We’re merging into Nestor part 2…….damn, all the good shit. This man should go double pro…….fuck yea, sick part. 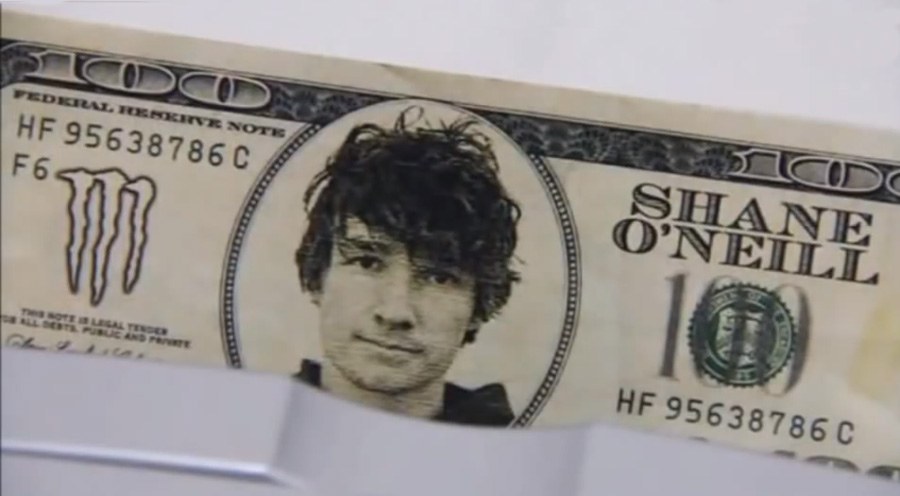 Shane O’Neil is up next. Sick money intro…….WITH A FUCKING MONSTER LOGO ON THE SIDE. Subliminal marketing isn’t even low enough for Transworld. I would be surprised if Transworld snuck in some crazy easter egg like playing the video backwards and it gives you instructions on killing your girlfriend; joining the army; and fighting soviets. Fucking aye…..this is tough. I wish they just sold Nestor’s part separately. Here he goes, the king of boring. I wonder what he’ll kickflip or back tail into during this part? If he does under 20 back tails in this part, I’ll chop my nuts off. Anything over 20, I smoke more weed.

Black and white skatepark line to insert how raw his skateboarding really is under it all. Contrived as fuck…….raw footage AT A SKATEPARK. It’s like stairs and handrails at a skatepark…………..I go STREET skating for STREET things, I go to the skatepark for things I can’t find on the streets. People have been getting that backwards lately. But it’s cool, street skating will be gone in 10 years or less……..then you can rent space at street league and skate for a few hours. Kinda like buying a lift ticket to ski, but gayer…….much gayer. This song sounds like Shane’s skating……..slow, boring, and you’ll forget it in 10 minutes. I think we’re at 6 back tails already? God that trick sucks……..it looks amazing when done right, but some how the worst kids seem to learn it so I just have a bad association with it. But whatever, back to getting eye-raped by Nugget.

I can’t wait for every teenage skate bro who wears Nike 6.0s, has a shag haircut, a New Era hat that keeps said hair in shape, and rocks Crailtap gear like it’s November 23rd, 2007 to drown their families in ejaculate after they watch this part. Well that ender was gay…….if you crooked grind that long, and make no grinding sound whatsoever you’re using way too much wax Mr. Nougat. 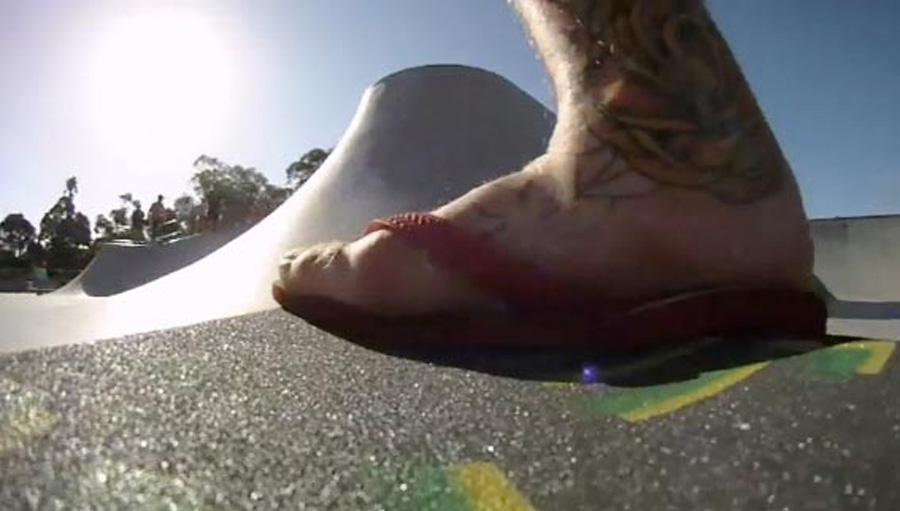 CAMERA ATTACHED TO THE SKATEBOARD WHILE CRUISING THE BOWL MONTAGE………FUCK YEAH. This is so much better than every new am out there adding another flip to a trick that was done circa 1998. AND THEY’VE GOT SANDALS ON, WHAT A BOSS! Oh shit….what’s this…………wait………………THIS LEADS INTO SAID MONTAGE OF A BUNCH OF JAMOOKS TRYING TO COME UP IN SKATEBOARDING. I’VE BEEN HAD! Once again, I can barely identify anyone in this video and I’ve been skating for 10 years. Imagine the kids who purchase this video, they’ll probably just give all the credit to who ever wins Street League. Another horrible song…..it’s like he got this soundtrack from the girl with lopsided tits who works at Zumiez. Or he just walks into Starbucks, finds the first disgruntled teenager he can find, hits shuffle on his iPod and jots down the first 10 songs. PERFECT, NEXT TRANSWORLD VIDEO SOUNDTRACK…..FUCK YOU HISTORY OF SKATEBOARDING BEING ASSOCIATED WITH GREAT MUSIC, FUCK YOU, MUAHAHAHAHA!!!!!!!! Who the fuck are half these assholes? Seriously? Why are they all so ungodly good at skateboarding, yet so generic. It’s some crazy paradox. I love all the 14 year olds dressed like mid-50s business men. Have fun living the most care free years of your life acting 40 years older than you are because you want people to think you’re super mature and deep. It’s cool though, one day your dick will catch up to the rest of your body size and you can break out of this habit. 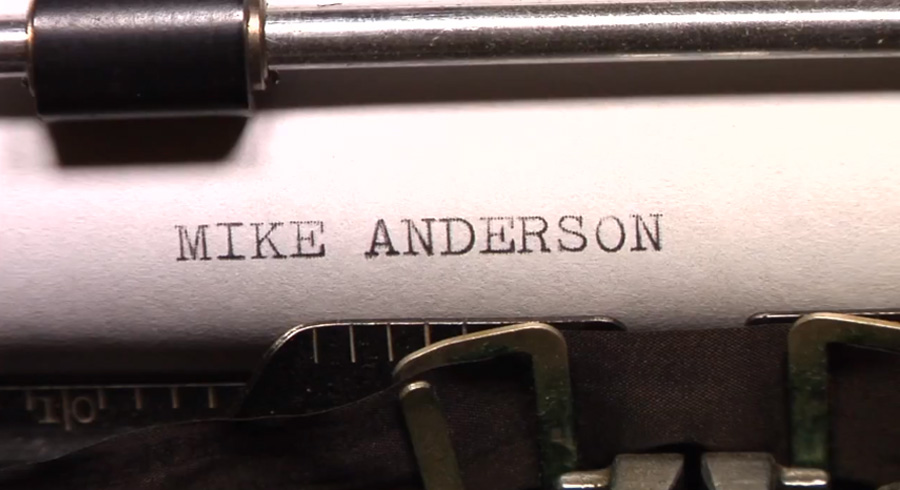 Thank fucking god….it’s Manderson. Dumb little opening montage to show how care free he is, I think everyone knows that though. Fuck this is amazing so far, even the song is tolerable. If only somehow everytime Manderson did an awesome trick (AKA every trick) it would; like a voodoo doll; kill Shane O’Neil a little bit. Mike Anderson is the only hope for the future, he will be our Terminator…..blasting through bullshit to regain skateboardings roots of fun and creativity. I’m not going to write too much during this part because it entertains me unlike essentially the rest of this video. Jesus…..straight fucking amazing. I would masturbate to that part if it were acceptable………so sick. 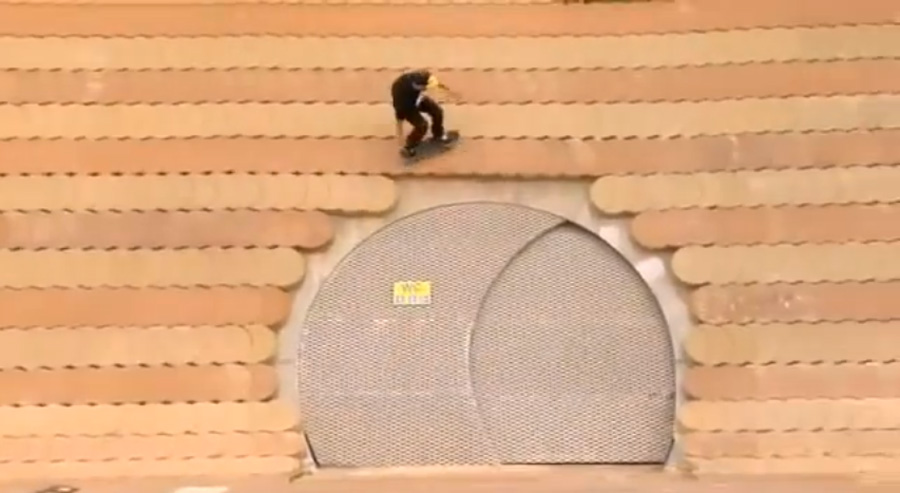 Now for the ender……Wes Kremer. This dude kinda looks like AVE with muscular dystrophy, but just like AVE kills it on a skateboard. I’m hyped he loves weed, skating fast, and skating weird things. So far, so dope………little classic rap and switch hill bomb lines. I guess this video has pretty much gone for terrible to better. Anyone else notice this kid absolutely loves khaki pants? He’s wearing them in pretty much every clip……….Dockers should sponsor him with their stain guard release technology. I’m sure the Berrics could push it and make it the new “Sk8 D1c3” or something. Damn skating rails in the rain….Pat Duffy is proud of you, kid. AND IT’S DONE! Nice, ghetto black dude sums up Wes Kremer’s part.

These random mash up clips credits are always pretty good. I’m actually amazed my poors eyes can tolerate any more violence after parts of that movie…… I’m still kinda stoned. And there’s the stereotypical “lense is scratched, let’s check for sure” trick………filmers need to sit there, film skateboarding, and shut the fuck up. These dudes are putting their lives on the line, it’s not their fault you can’t get your lazy ass out of the way when a board comes flying at you. It’s not like skateboarding is improvisational, you know the fucking line the dude is doing……..when he fucks up, GET THE FUCK OUT THE WAY CHUBBY! And it’s done……thank god, because my asshole quivers in fear of more Chris Ray filmed footage. Overall, this video gets a 6/10……..the only re-watchable parts are Manderson, Nestor, and Wes Kremer. Who didn’t see that coming…….Transworld may as well change their name to Hindsight Magazine at this point. Until next month when Transworld inevitably releases another shitty video…………later!”