REVISITING THE HANGING KLANSMAN BOARD 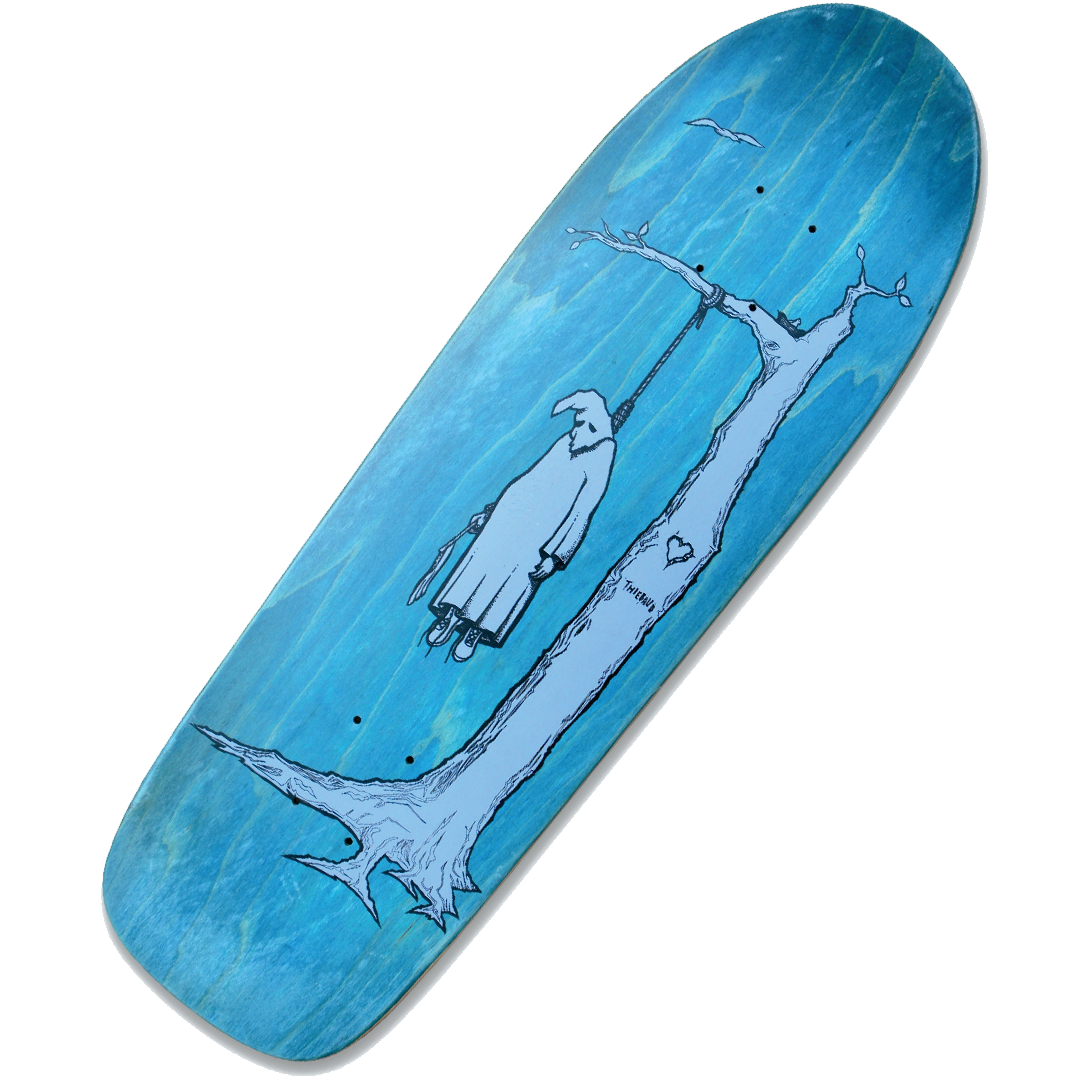 This past weekend, in a rare instance of digital synchronicity, my Twitter feed — mostly writers and jokesters — and my Instagram feed — strictly skateboarders — overlapped.

After scrolling through Twitter coverage of the “Unite the Right” rally in Charlottesville, Virginia, where a bunch of White Supremacists, Neo-Nazis and overall racist white guys gathered to spread hatred and violence – and which culminated in counter-protesters being run over by a car – I switched over to the generally more innocuous Instagram.

But instead of the usual barrage of insane skate clips, I saw one post after another of Jim Thiebaud’s famous “hanging klansman” board with captions and comments decrying the white bigots in Charlottesville – and I was stoked.

The days of captivating, iconic, or simply provocative skateboard graphics seem to be behind us, succeeded by an irreverent mixture of humor, minimalist line drawings, and all sorts of weird collage. But the “hanging klansman” graphic, which consists quite plainly of a person in full Ku Klux Klan attire hanging by a noose from a bare tree, is one that still resonates today.

The graphic originated in response to events similar to the Charlottesville rally. In the late ‘80s and early ‘90s, around the time Tommy Guerrero and Jim Thiebaud were launching Real Skateboards, there was a resurgence of KKK marches across America. So for his first board graphic on Real, Thiebaud chose something powerful and timely that represented him more accurately than any basic typeface ever could. 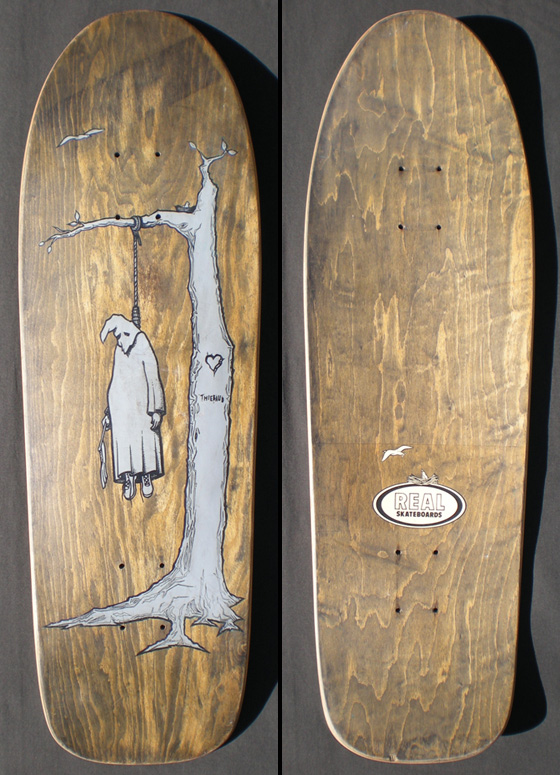 As Thiebaud explains in Agents Provocateurs, a book of subversive skateboard graphics, the “hanging klansman” image was more than just another board graphic. “It was an idea I wanted to do for a while. An incredibly strong statement with a simple image.” At the time, most board graphics centered around iterations of Powell Peralta’s famous skull logo or cartoonish characters that appealed to teenage boys. The art – a gift from Natas Kaupas, who did the line drawing – was a stark departure from this less substantive imagery. Many of the most memorable ‘90s graphics that followed also made an effort to provoke, although not with the righteousness of the “hanging klansman.”

The art is straightforward: an American figure of racism and hatred being put to death. It’s also punk: subverting the threat of White Supremacy with its weapon of choice, a rope. Yet there’s a subtle touch of sensitivity: the signed heart carving that recalls the innocent image of young love, and the birds nesting above the hanged figure, showing that hope isn’t lost during times of darkness.

This is not to say I’m glad the “hanging klansman” graphic became so relevant again. Racial violence and hatred of any form or degree will always be sickening and reprehensible. But when that ugliness rears its head and begins brandishing confederate flags and swastikas, it feels empowering to be able to respond with a similarly arresting image, especially one that annihilates the KKK using its own wretched history.

For the record, there are plenty of skateboard graphics that make me wince. World Industries’ “napping negro,” Slave’s “stay positive” board poking fun at domestic violence, and even Busenitz’s questionable adaptation of the “hanging klansman” that depicts a hanged segway cop. But the “hanging klansman” graphic is one that will always make me proud to be a skateboarder, every time it reappears. 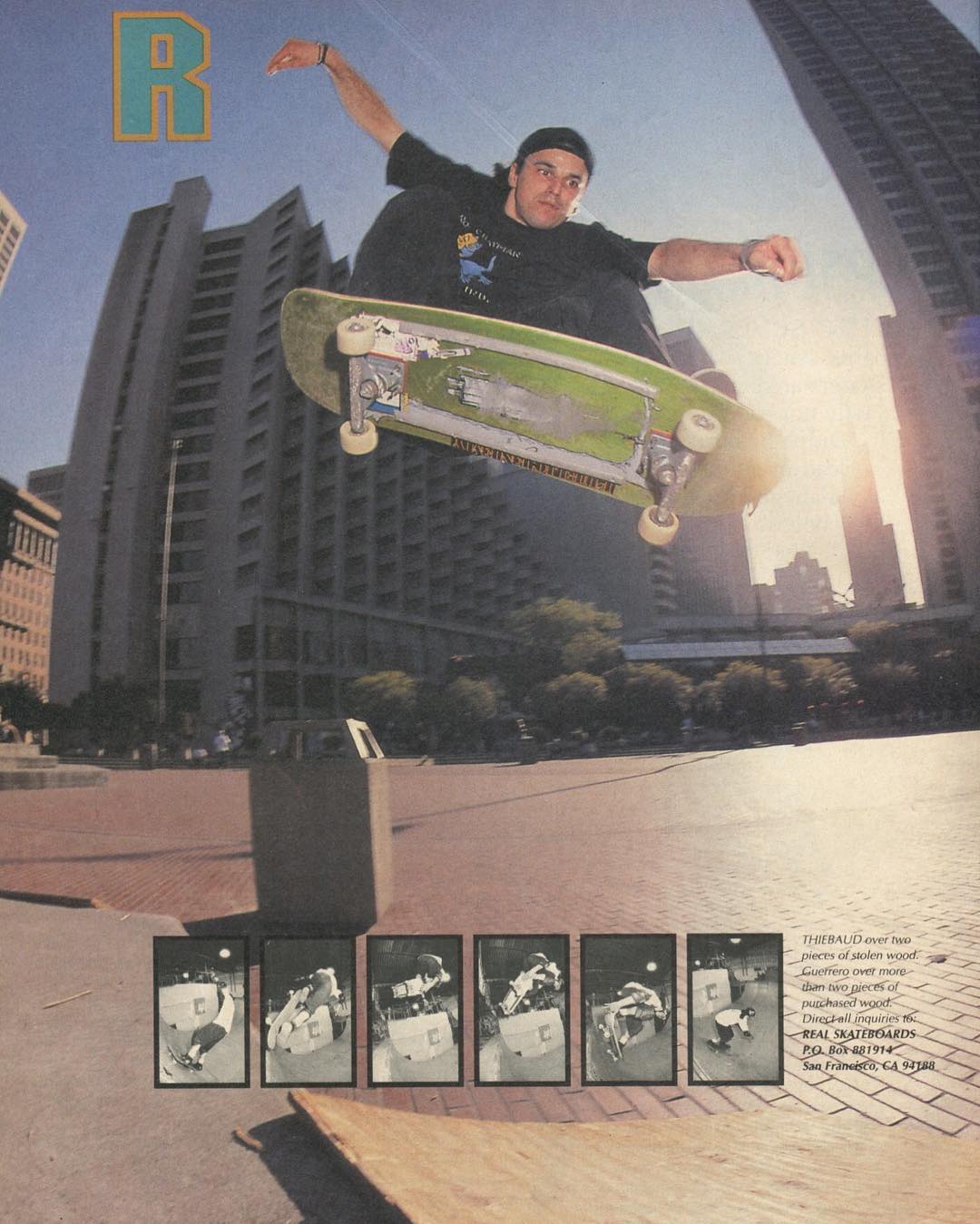 At a disturbingly recent KKK rally in South Carolina in 2015, Bluetile, the local skate shop, talked to Thiebaud about making “hanging klansman” t-shirts to give to demonstrators protesting the rally. After Bluetile owner Dave Toole confirmed for Thiebaud that there was, indeed, a KKK rally taking place, Thiebaud reportedly sent Toole the artwork and told him print as many shirts as he wanted. “Putting racial injustice under the spotlight is always possible…and needed,” Thiebaud said in Agents Provocateurs. “Skateboarding is always a great medium, our voices are loud as fuck!”

The White Supremacists, Nazis, and Neo-Nazis that rallied in Charlottesville reminded us that their hatred is still alive. It may not always be productive to counter that hatred with violence, but it cannot go unchecked, so for now I raise them a “hanging klansman” with one hand and a middle finger with the other.