WE TRACKED DOWN THE EPIC STREETPLANT DAD 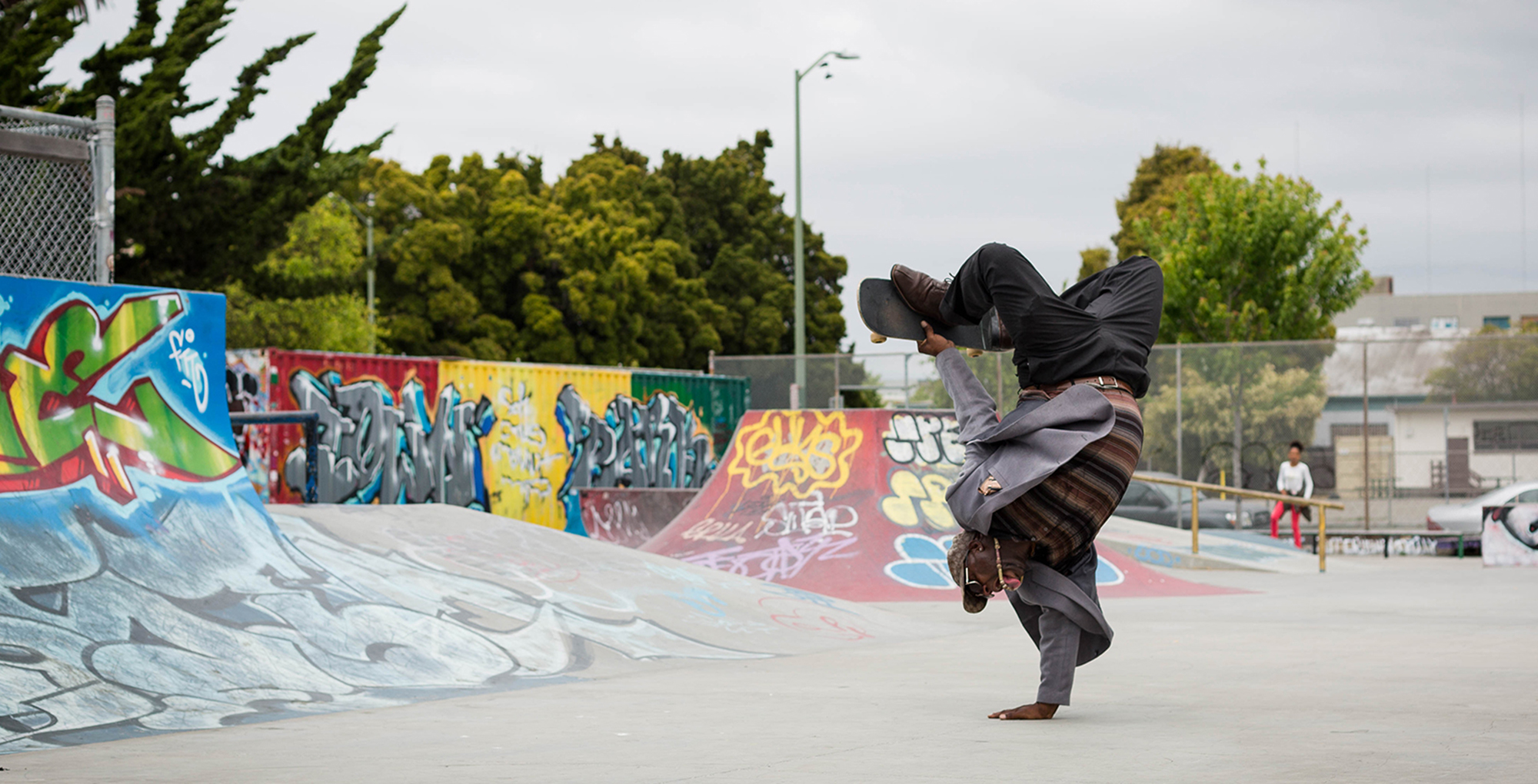 Odds are, if you have your face glued to Instagram as much as any other skateboarder, you’ve already seen the viral clip of this corpo-looking businessman hitting a streetplant. Just like the skaters who filmed it, our minds were blown once we saw the clip, and we immediately started an online search party in hopes of finding the mysterious suit-donning streetplanter.

With the help of some friends from DLX SF, we were able to track down Avery Baxter, whose story was quite different than we could have imagined. Avery—a Bay Area native—isn’t actually some hotshot Silicon Valley venture capitalist like you may have guessed. In fact, we discovered Avery’s life has been filled with a lot more hardships than could ever be communicated in a ten second Instagram clip.

So how did this exactly go down? Were you walking to work in the clip that went viral?
I was on my way to surprise my adopted mom on Mother’s Day, because I had not seen her in about eight months or spoken to her on a regular basis because I moved. I just happened to be going by San Jose State University, and there were some skaters out there. I was watching them skate for a while, and then I asked one of the young guys if I could borrow a skateboard and he said to be careful and we went from there.

Was that first try?
Yeah, that was my first try. I didn’t even know I stalled that long, cause if you want the raw truth, I was drinking some Bombay gin. I was trying to calm my anxiety down before I saw my mom, cause I got anxiety really bad. I just happened to take off and boom. I told the skaters to send the video to me, but they sent it to the Internet instead, then one of the kids texted me three or four days later and said, “Hey man, you’re going viral.”

And then my brother saw me at church and said, “Brother, I think you’re famous.” I was like, “What do you mean?” He said, “You’re on the Internet. They’re asking whose dad this is.” I said, “Stop playing with me,” and it went from there. I wasn’t looking for those numbers. It was beautiful. 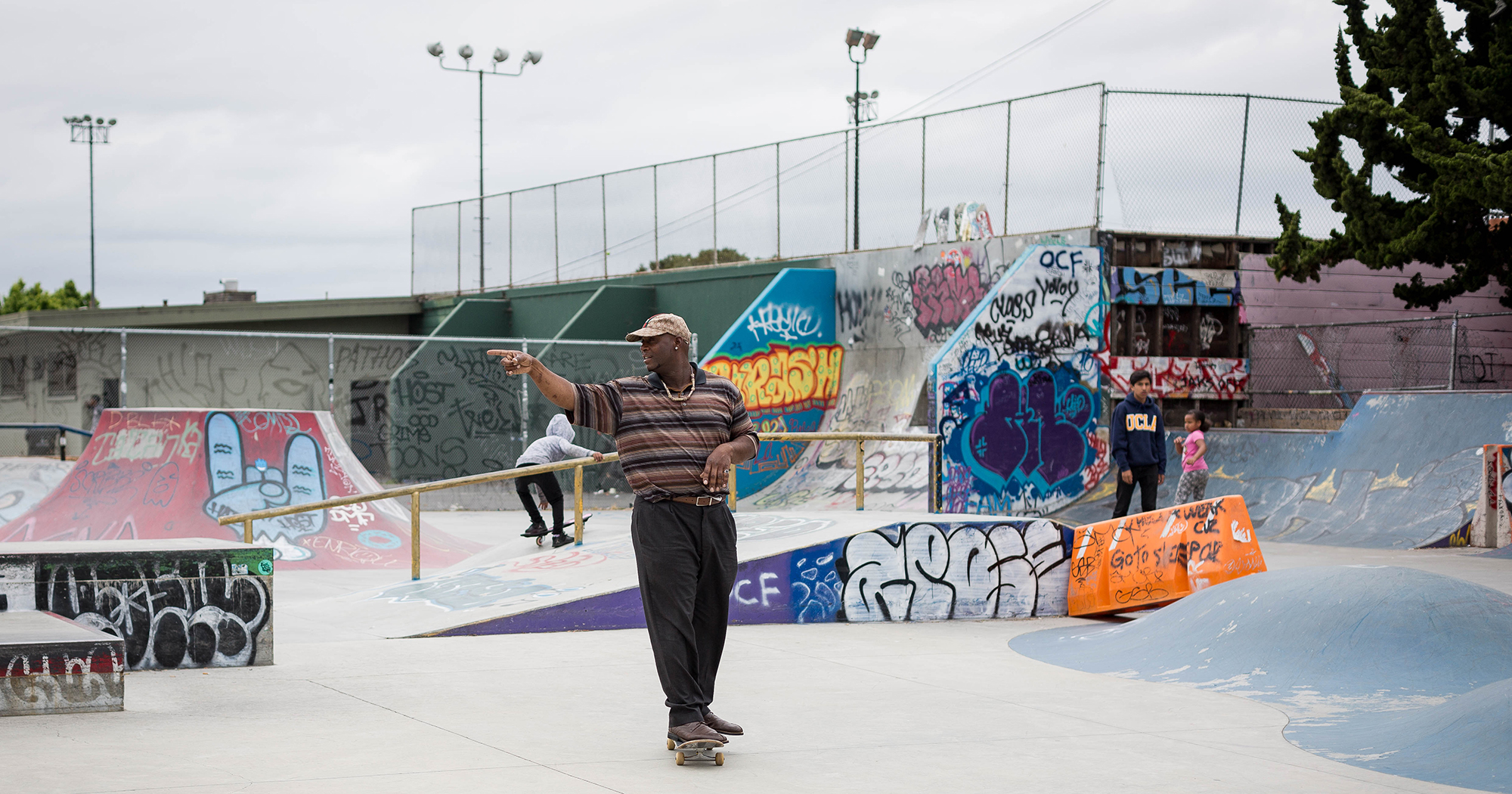 How did you get into skating and how’d you learn old school tricks like that?
When I got adopted at the age of eight I was going to different foster homes and a neighbor kid had a skateboard. I wanted to learn, and he gave me a board and I never got off. Simple as that. I always wanted to master the handplant and the ho-ho. I used to be able to do [ho-hos] when I was younger, but I have to master them again. I’ve skated with Karl Watson at Pier 7 in San Francisco before they closed it down, back when he was on Mad Circle. I also used to go to all the Hood Games in the Bay Area, those little skate demos.

Growing up, I was psyched on Tony Hawk and Hosoi. Those were my main two. My first skateboard was a Nash, and then I got a Santa Cruz board, the classic screaming hand one. It was beautiful. That’s when I started learning how to ollie and all the basics.

My son skateboards, I’ve been teaching him since he was one and a half. I also have three daughters and they all skateboard. My son does rock and roll and he skateboards and is a beautiful kid who just graduated high school and who wants to be a chef. He’s trying to get me back into vert skating. I’m 38 years old, I also teach kids skating from age three to 11, since they’re easier to work with. They don’t think they know everything. I work with low income or Section 8 families. It’s more important for their kids to do something positive.

Do you have an after school skate program or something?
I mostly just teach kids on the streets, when I walk or am on the go, when I see them on the streets. Whatever reaches the kids. I also write. I do poetry and I do stand up. That’s my main thing. 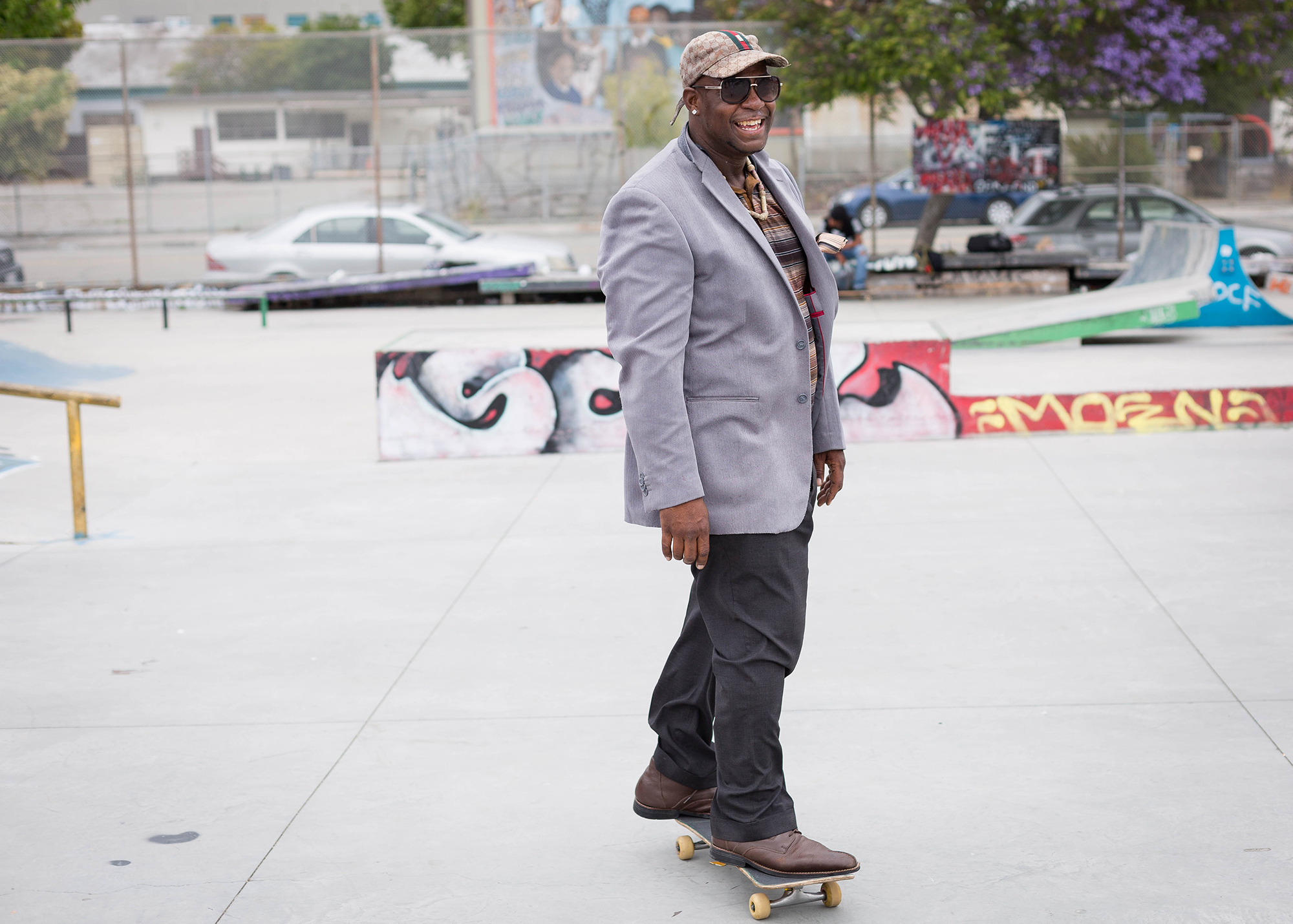 Do you watch skating today at all?
The only person I watched from today is that guy who had the show with Big Black. What was his name? Rob Dyrdek. I loved him when he was a youngster and he came up and took it over. I like him a lot.

Were you ever sponsored?
No, I just skated. That was my outlet at the time for when I got angry or nervous.

You live in Oakland in California, yeah?
Right now I’m basically homeless. I have a place [I stay at]. It’s called The Henry Robinson Center on Clay Street [in Oakland, CA]. It’s a transitional place. I have two roommates, but it’s not good for me because they smoke methamphetamine. Honestly, I never thought I’d get addicted to anything, but I got addicted to that drug, and I’ve been working on it. I’ve been doing a great job doing it I think, but I’m not strong enough to be around people like that, and when I go home, I can’t bear it, so I just use it as a storage. I sleep from house to house with the help of my family who I just reunited with after 15 years.

I had a house in the hills and the person who rented it to us didn’t want to extend our lease, so we all had to split up. My kids had to go one way, my fiancé had to go another way, and I had to live in a tent for a while until I got into Henry Robinson Center. I’ve been there for six months, and I’ve been thinking of setting up a Paypal just asking for a dollar from whoever could help me out with something so I can make something work for the kids. 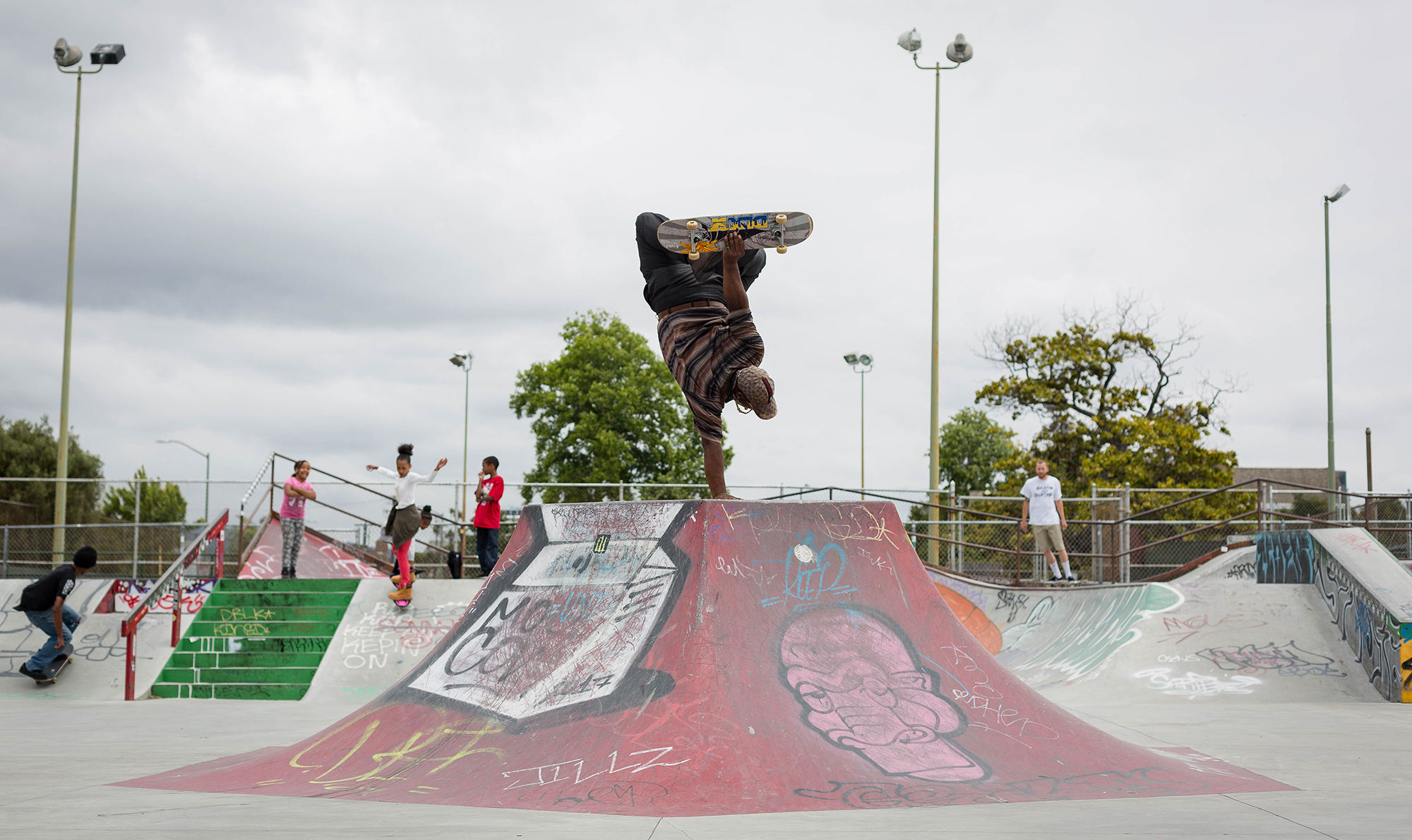 Man, sounds like a tough situation.
I’ve been through a lot. I was molested, tortured. I was tied to water heaters and burned with cigarettes. My [biological] mom was a prostitute, and she just died after I reunited with her. I was molested at the age of seven by a Caucasian man off of 9th Street in Oakland. I think he was one of my mother’s friends. He knew I didn’t have money to eat and he had a jar of change and basically what he used to do was, if you wanted the money, you’d have to give him oral sex. I was trying to feed my mom cause she had a drug addiction…

With all that, I should be a monster. I should be mad at the world. But I don’t know what it is. I enjoy seeing kids smile and just living their lives and being a kid, cause it goes by fast, in the blink of an eye. One day you’re ten, then the next you’re in your 20s with a whole lot of responsibility. So this [skateboarding] is like my outlet for my anxiety from all my issues that I’ve gone through. This is how I channel it.

We’re hoping things work out for you. If you set up a Paypal we can link to it in this interview.
OK, I’ll try and do that. [Editors note – he set it up: [email protected]] I’m trying to get my daughters a place to live right now. Anything to turn the lights on. I want to give some relief to their mother because she’s a wonderful lady, and she’s about to move to Belize and it takes a lot of money to get out there. She really wants the kids to live with me. Hopefully we get blessed. 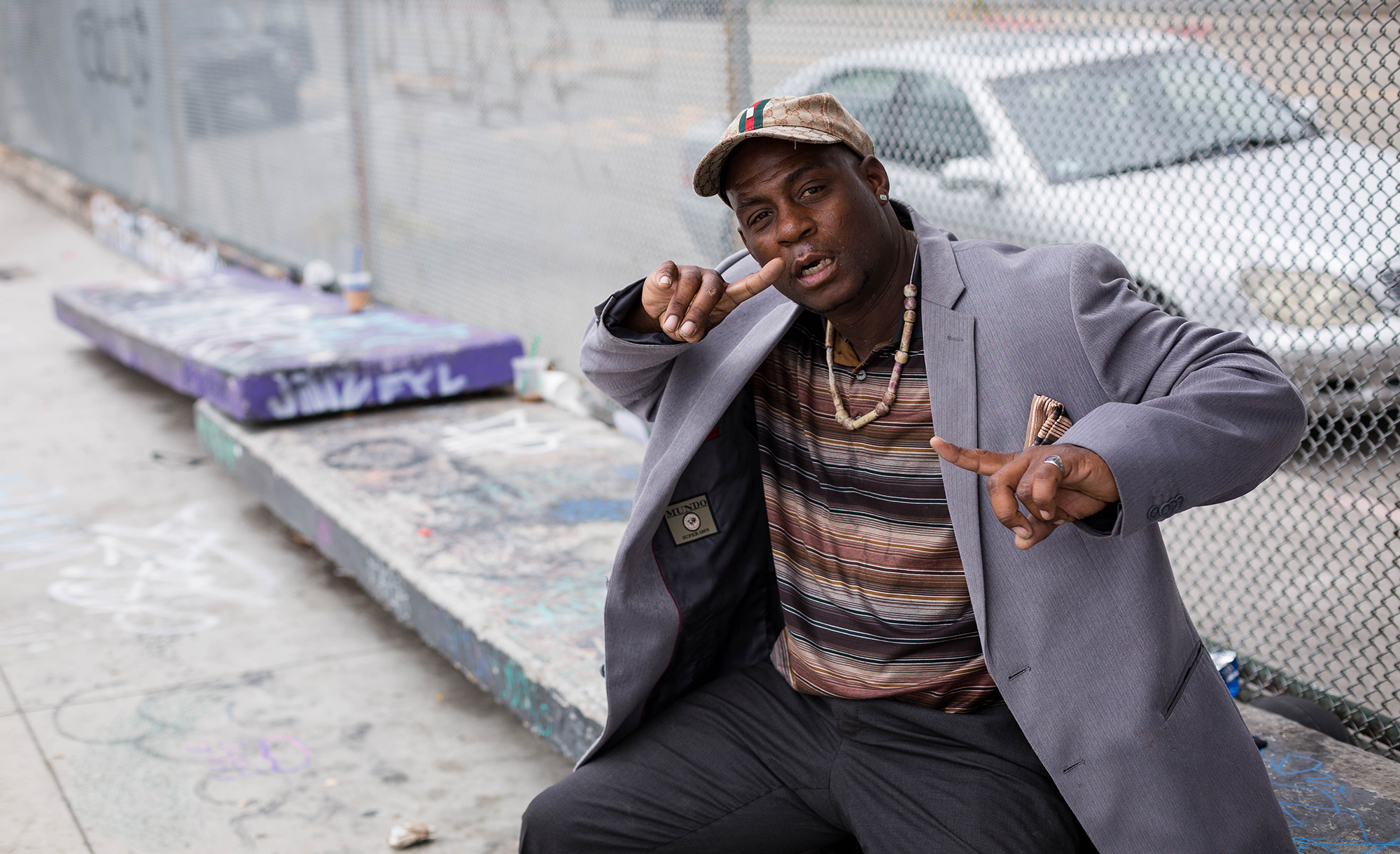 Why is wearing a suit so important to you?
My adopted dad told me you never have a second chance to make a first impression. You never know when you’ll run into your future employer or an opportunity. If you look like money, you can get close to money and rub elbows with people who have money, and hopefully, they see your beautiful personality.

From that day, when my dad passed away, I started wearing them and dressing nicely every day. I’m just trying to follow in my adopted dad’s footsteps. He’s a good role model. A lot of people like him because of his actions, not his words. Anybody can paint words to look like gold, but if you watch a person’s actions and let time do what it do, you’ll find out what that person is about.

I feel like this world judges you from the outside, so if I walk into a store with a hoodie on, the response I get… you already know. If I walk in casually with a suit on, I get, “Excuse me, sir. Can we help you with anything?” It’s a whole different experience. I liked that experience and I got addicted to it, so it’s like when Superman runs up into that phone booth and throws on the cape and comes out with his chest sticking out and his back straight. That’s how I feel when I have on a suit or nice clothes on. It doesn’t matter if I have the cash in my pocket. 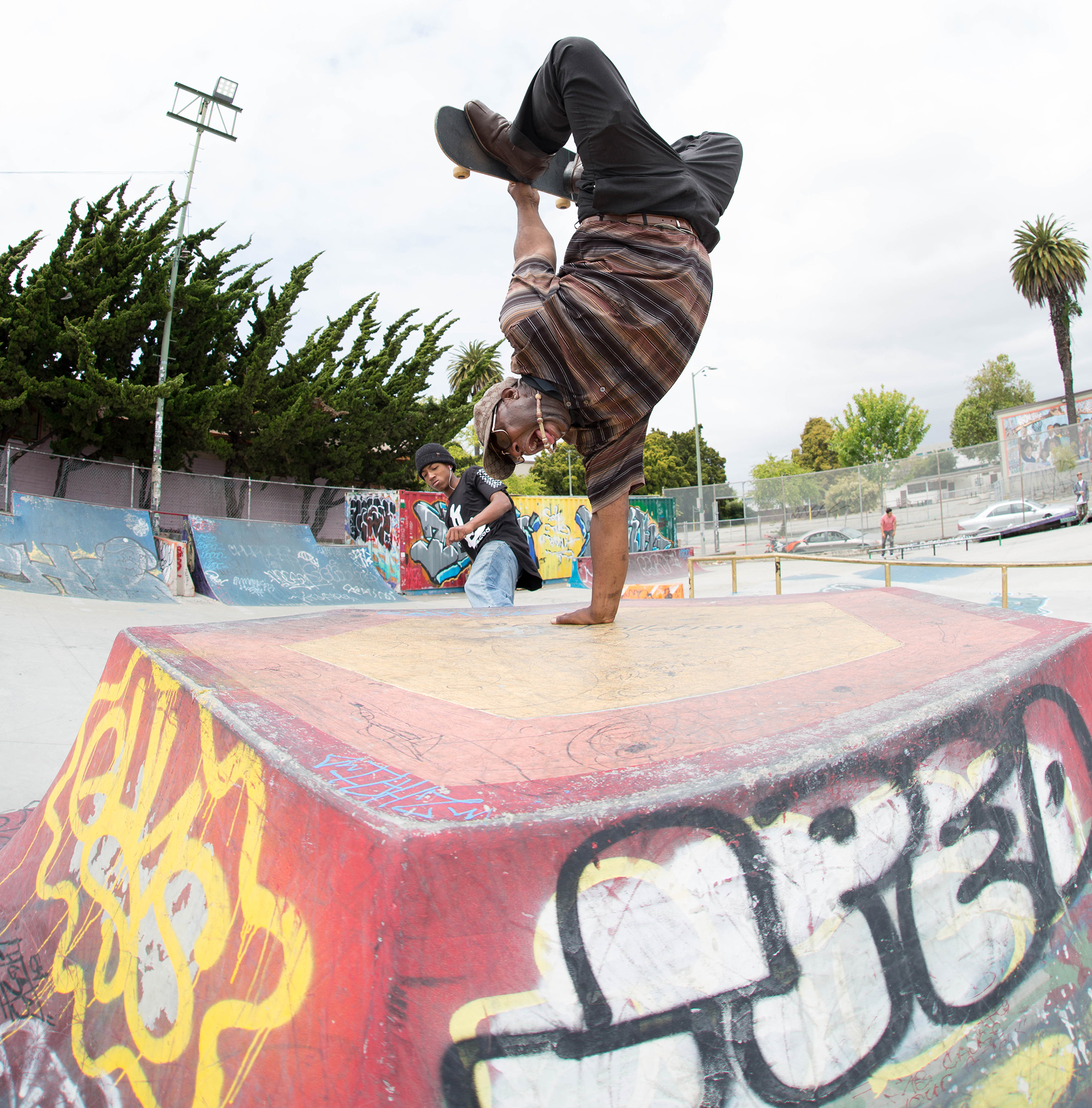 So even when you lived in a tent, you would wear a suit every day?
Yup, every day. I don’t care if I have to go to a Salvation Army or a secondhand store. I also work through an agency called Wardrobe For Opportunity. They fitted me in a three-piece suit. They gave me that suit I had on in the clip. It was a blessing to get that. I don’t have many like that, but if I did, man I would try to open up centers and see what I could do.

I never cared about money. I always felt that if you do what you want to do, personality goes further in life than anything else. You can get far off just your personality. When you chase money, you’ll have a miserable life.

People used to always ask me, “How do you walk around in suits but you live in a tent? Every day you wake up and come out in a three-piece suit and walk around acting like you have a million bucks in your pocket, but all you have is lint. You don’t even have lint to rub together.”

I just used to say, “You know what, that doesn’t matter to me. I’m on a natural high all the time.” 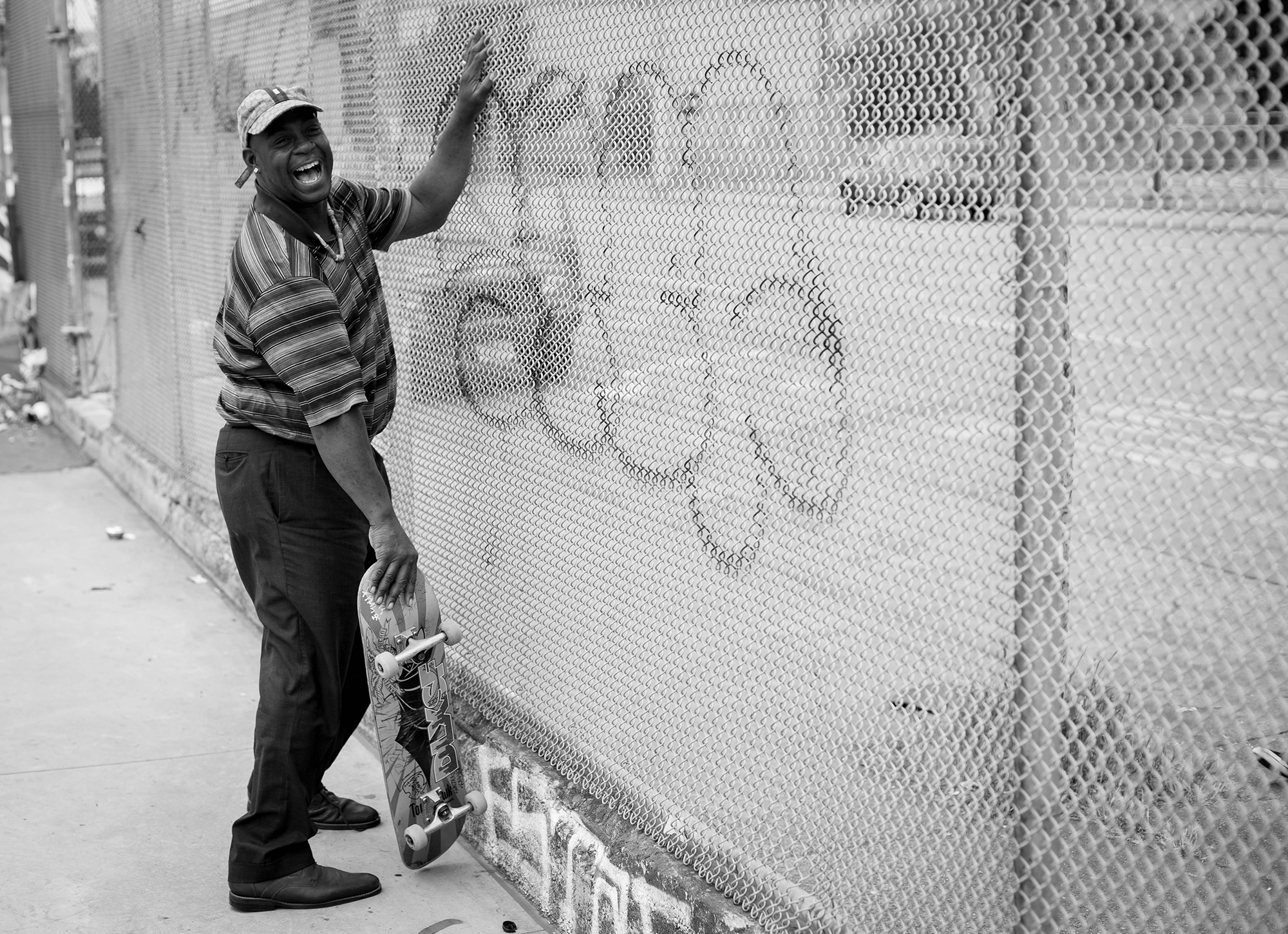 If you wish to reach out to Avery – emails / Paypal donations to AveBax [@] gmail.com.