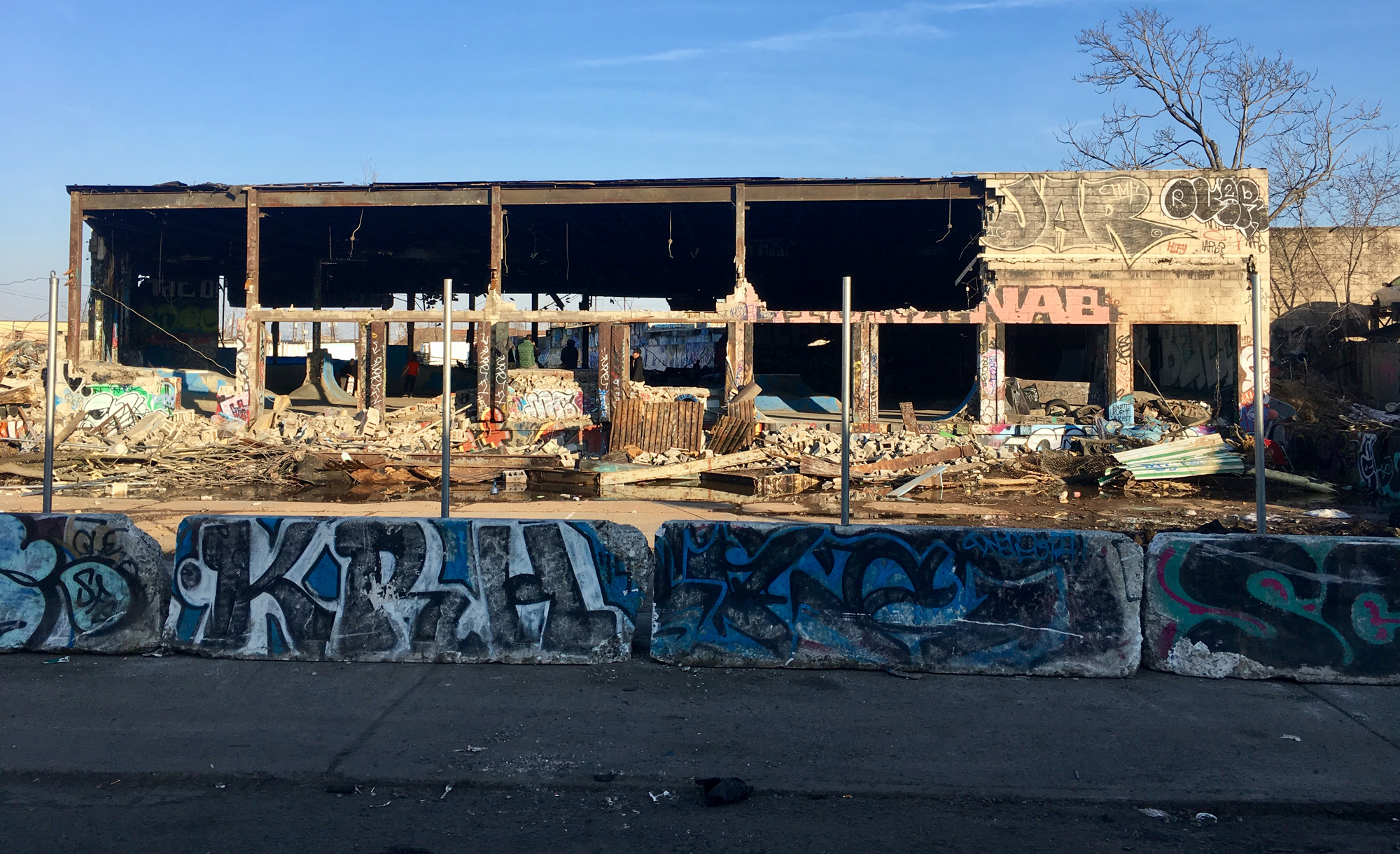 Shorty’s, one of the East Coast’s most beloved DIY spots, has been rumored to be on the verge of demolition for almost as long as people have been pouring additions to the building. Over the years, people have told the skaters that they were buying the property or claimed that the building was set to be demolished for redevelopment, but none of the rumors had ever panned out. So when fences magically appeared on the Thursday before St. Patrick’s Day, it obviously was a cause for concern.

One of the reasons Shorty’s has been able to exist for so long is because the city classified the site as a brownfield. In the New Jersey law, a brownfield is a former industrial site that is in need of development but may be contaminated by pollutants.

When a city classifies a plot of land that way, it becomes eligible for cleanup funding from New Jersey’s Department of Environmental Protection, but only after hiring a private site official to do an environmental site assessment. Because no buyers stepped forward and were willing to put up the money to go through that process, the easiest and cheapest thing for the city was to do absolutely nothing with the property.

As a result, the abandoned building became a graffiti spot, a place to do hard drugs and a home to a woman named Shorty. Eventually, the footprint of the DIY skatepark spread enough that Shorty gave her blessing and moved on, as did most of the unsavory activities. After sitting vacant for over 20 years, the city took ownership of the property in 2013.

Luckily for us skaters, Shorty’s has had an unlikely advocate in its corner: Newark’s mayor, Ras J. Baraka.

The builders have met with the mayor over rumored threats to the spot in the past, and he has shown face at barbecues and events to show his support. Local governments usually don’t take well to people illegally building skateparks, but before his job at City Hall, Baraka was a poet. He was also an eighth-grade teacher, and the guy talking to kids about love between songs on The Miseducation of Lauryn Hill. Given his background, it almost made sense that he got behind the project, which added to the shock when the walls started to get knocked down that Thursday.

The iron framework was nearly all that remained of Shorty’s front wall, but the roof was still standing. So were a lot of the other walls.

That night, some of the locals, who had spilled blood, sweat and cement there over the years, gathered around a fire to regroup. The fruits of their labor, which were thankfully largely intact, were covered by a blanket of debris. 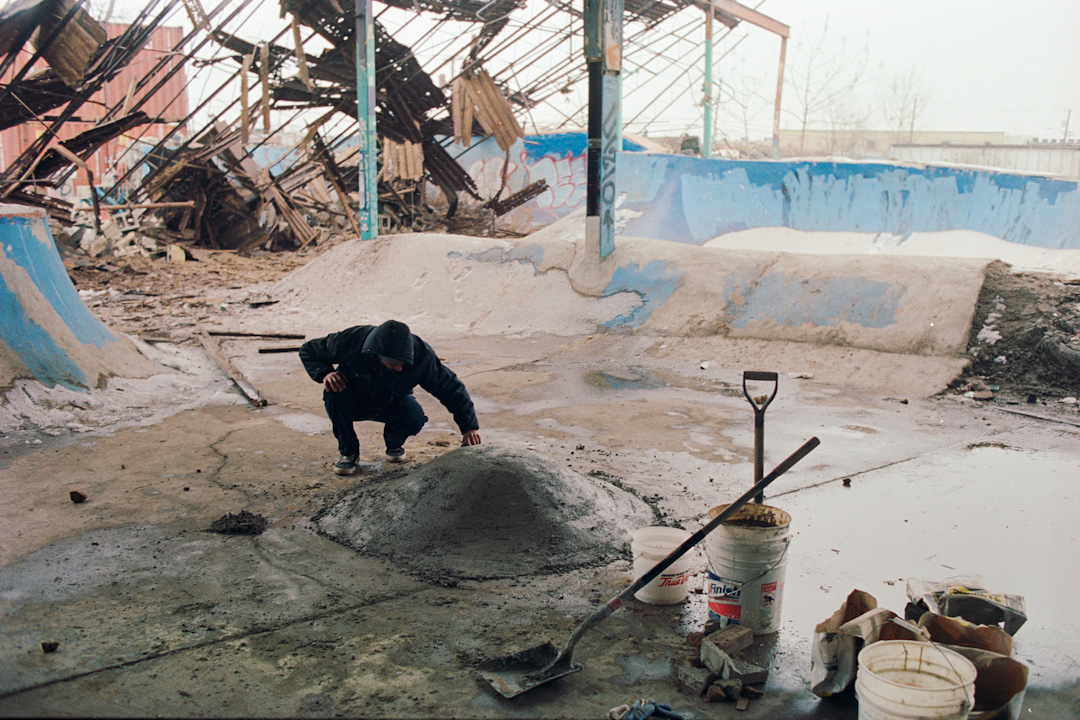 The next morning a worker from the Newark Department of Economic and Housing development showed up. What happened when he got there was a role reversal of the standard skater versus authority conflict: he called the cops and had them kick out the demolition crew from further destroying Shorty’s. The worker named Al-Tariq Shabazz introduced himself to the skaters and gave them his cell phone number. He explained that the city had rented the land out, but the lease was specifically for parking trucks on the lot behind the building, not in the skatepark area. The demolition was in violation of the lease, and the contractors hadn’t applied for a permit or gone through any of the other necessary steps to get it sanctioned by the city. They were in the wrong.

With word out that the building had survived, people came out on Sunday to clean it and regrow it.

Shorty’s is a hub for the skaters of Newark, and many have chipped in along the way. Andrew McLaughlin, who did the first pour, estimated the total cost of cement alone to be around $20,000. He said that most of the money had come from the people that skate there. “There’s been people that help us out.” He continued, “We passed the hat and it’s never really felt like it’s out of pocket because everyone chips in a lot.”

The earliest pours were done by hand, and the transitions and coping are a far cry from anything you’d find in a professional skatepark. Dozens of bags of cement turned into individual quarter pipes, which in turn grew into bowled corners and extensions. At around the same time, word was spreading and professional skatepark builders started to help out. Pours started to come from cement trucks instead of bags of cement.

After all the recent drama, some of the skaters and builders met with Mayor Baraka. They asked about what happened and what the future held, and brought along old issues of Thrasher that had photos shot at Shorty’s. He reiterated that the demolition wasn’t sanctioned by the city and that the lease was for the use of the land behind the building, but suggested the builders find another piece of city land that he might be able to gift them to build on. 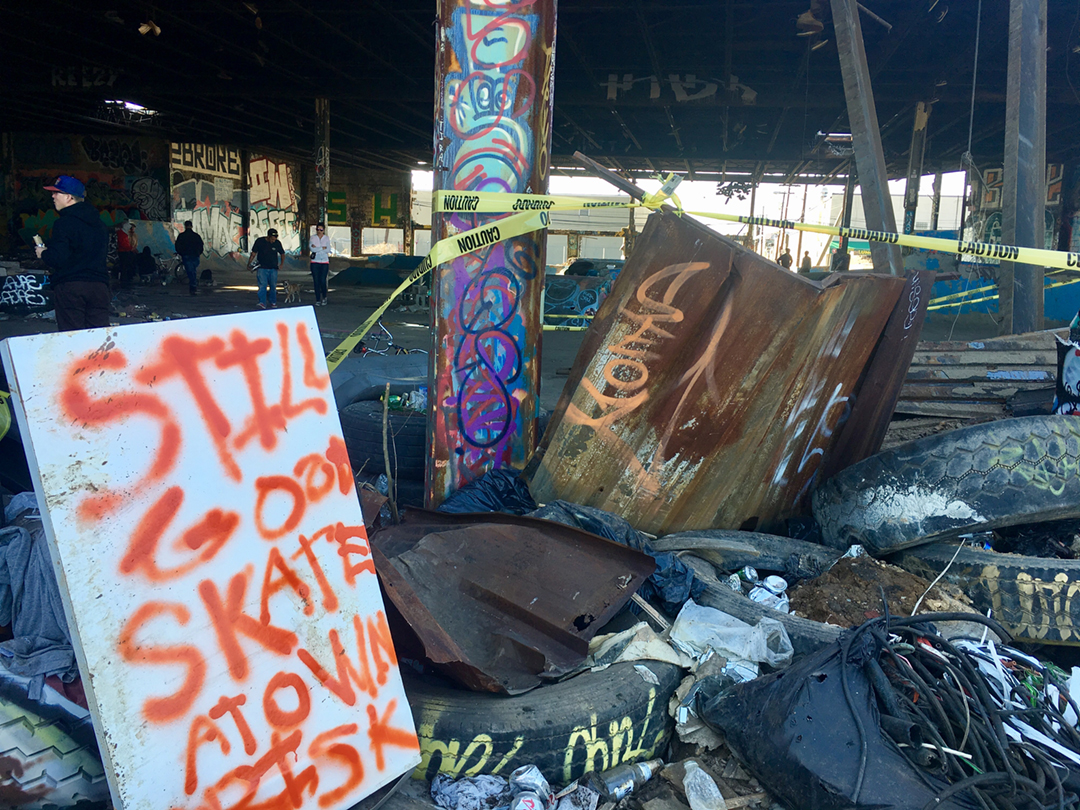 Several Mercedes with tinted windows pulled up to Shorty’s that same evening. The people who got out started intimidating people inside, saying that they had bought the building and that the people inside had no right to be there. The skaters, fresh from meeting with the mayor, encouraged them to call the police. The cars left pretty quickly after that.

Later that week, city hall called a meeting with the developers and builders at Shorty’s to clarify what could and couldn’t be touched on the property. The building was safe, and there was a shaky truce, but there were no promises for the future.

One of the things that you need for a successful DIY spot is an undesirable space, and by cleaning it up it inherently becomes more desirable. Across the country in Portland, what was once Burnside’s parking lot is being turned into a 21-story apartment building. The bridge it’s built underneath is also slated to be renovated soon, leaving the fate of one of the first major DIY spots up in the air.

The DIY park movement has progressed a lot in nearly 30 years, and under the right circumstances, short-term sustainability is attainable. Even if the future is unwritten, the guide to starting over is well documented. All you need is pavement and the willingness to lug raw materials there. Property values may continue to rise, but a bag of concrete isn’t going to cost much more than five bucks.