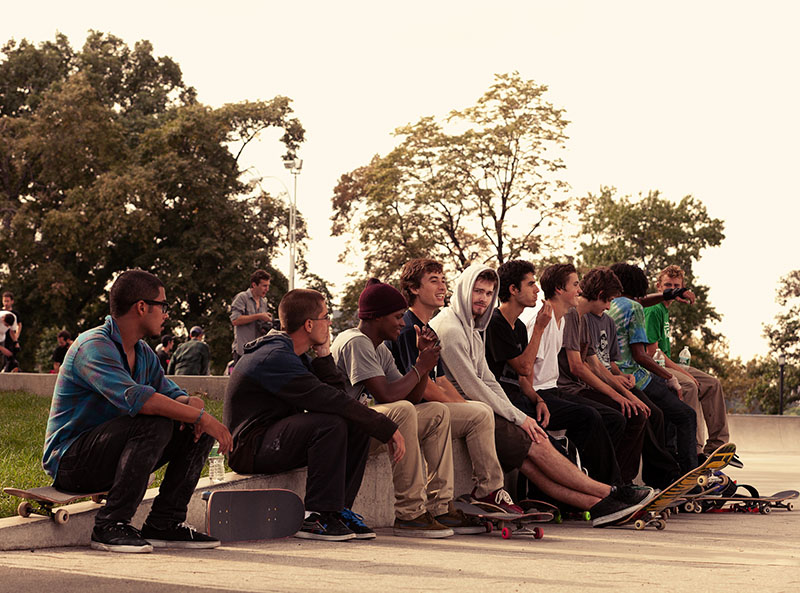 As skateboarders here’s one thing we can all agree on: This years “One In A Million” contest sucked. Pulling comical Jereme Rogers level Youtube dislikes, this years OIAM caught everyone by surprise- Taking the proven skateboard heavy formula from the previous years contest and blowing it out with harsh judges, eliminations and dramatic dialog usually reserved for a bad MTV reality TV show.

And so it really just came down to this: What happened with the contest this year? And who was responsible? To get what was really going on, we hit up Alex Klein, (the director) Colin Read, (the skate filmer) and some of the contestants. First we start it off by talking to Colin Read, a dude who was behind the scenes the whole time, and also a filmer for last years contest to tell us how it really went down…

How do you think OIAM turned out? Would you consider it a success?
The show was an absolute failure. I can’t support a single thing in the production of final editing of the episodes. But as an experience for the kids, it was great. That’s what they didn’t show–how much fun the kids were having just shredding. Really, after the first night–they were all super tight with one another. There was honestly not a shred of antagonism or rivalry between any of them. Every night they all headed back to the warehouse, smoked $100 of weed, and fucked around till 3 or 4 AM. They’re all good friends now, Kennedy rides for Lou’s company, Matt is on Skate Mental, some other kids are hooked up. They’re all friends for life and had a great experience.

Seems like how the show was edited, the kids get the blame as being “uncooperative” and “spoiled”. “They couldn’t even finish”. Do you think it was the kids fault that there was no winner?
It’s a lie that the kids were at fault. “They couldn’t even finish?” They skated at least 10 hours every single day. Here’s the deal–the kids were fed up with the bullshit. You need a bit of background on the situation of the week to really understand it. First off, it was supposed to rain all throughout the week they were there. We got blessed most of the days–it only rained 2 of the days. But every day, the forecast promised afternoon rain. So as you can imagine everyone was really trying to get out of the warehouse and go skate the streets. Everyone was up early and ready to roll, but Alex (the director) wasn’t having it. Some days, he made them do interviews before they skated. Some days, they had to do those pointless challenges before they could skate. All while the rain clouds darkened and grew.

And then, every day, before we could skate street, Alex insisted we skate a skate park. Why? Because it’s “guaranteed content”. Everyone just wanted to skate street, but we had to lurk at a park with scooter kids for 2 hours. By the time we could finally leave, it was already the afternoon. Everyone’s thoughts were, “If it rains, we can skate the House of Vans.” So why were we wasting time at a skate park?

That being said, the kids all fucking destroyed. It’s bizarre how much footage they all got. The episodes didn’t even show the last 2 or 3 days of skating, and half of the tricks landed before that. 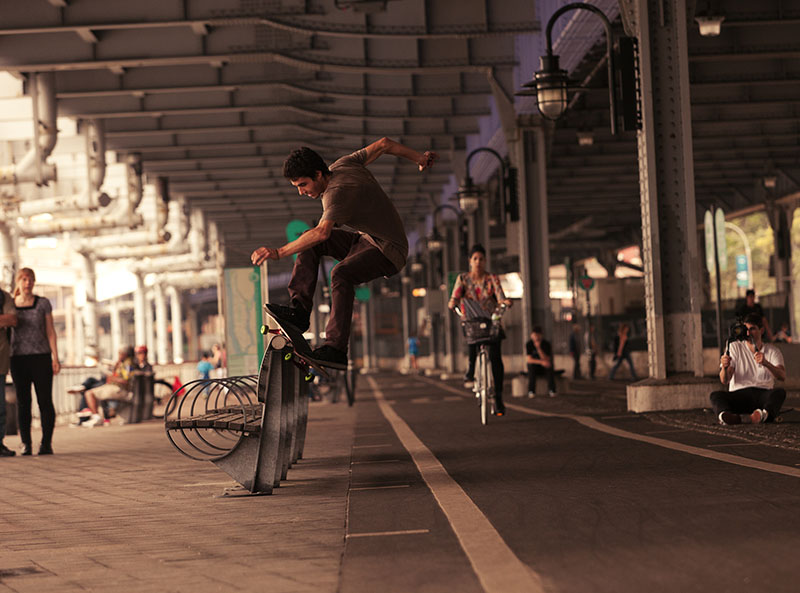 At what point did things start to turn sour and people start to become unmotivated?
They were all really bummed on the eliminations. They were all friends, all wanted to skate together. When Matt [Militano] got the boot, it was a huge bummer–he’s an incredible skateboarder, and a fun kid. Everyone begged for him to stay, but that was that. And so it went.

Were there any specific days / challenges / situations that caused this?
One day–I think it might have been the pizza day–they had to do interviews after the challenge, and before they could skate. Everyone was dying. There were only 2 days left. Alex wouldn’t let them leave until all had been interviewed. So a third of the way into the interviews, I decided we had to do something about it. I got the kids all together–all of them–and when the one who was being interviewed left the back room, we grabbed him and skedaddled. No HD filmers, just us mashing down the street. The kids were so hyped, they all shredded. And the next day, we did the same thing.

I think that might have been part of the downfall of the show–there were no HD cameras to document it. But I filmed everything. I guess that wasn’t working for them. They could have made it work, all they had to do was send the three fucking finalists to California. We had the three who would go, it was all fine. Alex just freaked. The kids had nothing to do with the failure of the show.

”The kids had nothing to do with the failure of the show.”

Now, onto the cameras. Here’s the problem. Most of the HD filmers didn’t skate. One that skated left after the first day, and there was one other who was rad. But the rest–they were film-school dudes Alex hired. I’d like to say we all worked together, but I can’t. They didn’t talk to the kids outside of ordering them into the shot. More than that, they didn’t respect the kids–they would shove a camera into their face and ask them leading questions while the kids were trying to skate or have a conversation. You can’t work with someone who doesn’t respect you. On a similar note, the only photographer Nate, a real skate rat, was not paid at all. In the end they didn’t use his photos, leaving him wondering. He ended up releasing them on his blog

The director, Alex Klein said that the reality show part of it, was a “parody of reality TV”. Behind the scenes did it seem that way, or does this just seem like he’s saying this after the fact to cover his ass?
That is total bullshit. He said to me, and I will to try be as accurate as possible, “I want to make this show accessible to people who don’t skate, to people who watch football and reality shows.” He did tell the kids not to take it too seriously, but then he went on to treat everything completely seriously. Covering his ass. 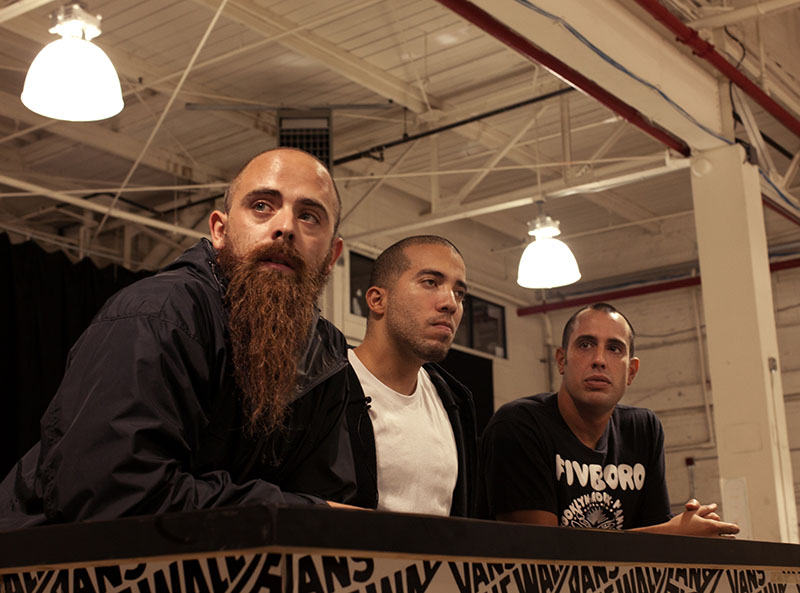 Is Lurker Lou really a dick like he was portrayed to be?
Lurker Lou really got slammed hard, but in reality, he was the coolest out of anyone to the kids, skated with them almost every day, chilled with them every night. It sucks that he got portrayed so badly, and he did say those things, but he’s just sort of a performer, and I guess he enjoyed the chance to be an asshole on film and get payed for it. He’s a very outspoken, honest guy. And behind the scenes, he was one of the ones saying how much bullshit all the things were. He, I, Reno, and others all tried to convince Alex of different ways to do things, but there was no changing his mind, and he had complete creative control.

Who’s Reno?
He’s the current editor of SLAP, a real stand-up dude (and a great skater). He was out skating alongside the kids a lot of the time, buying them food and drinks, standing up for them. He was so bummed at everything that was going on, but he couldn’t do anything about it. Likewise, Billy Rohan, Steve Rodriguez, and Rodney Torres are all truly invested in the heart of skateboarding. They’re all legends, and big parts of getting the NYC scene to where it is today. I hope no one believes they are assholes or sellouts, because it’s hard to get more legit in skating than those guys. They said what they said, but I don’t think any of them knew what they were really getting themselves into.

”I don’t think any of them knew what they were really getting themselves into.”

How did OIAM really end? Did kids just go home, or refused to be filmed and left the warehouse?
The judges and I had it down to the final 3, we already had a pretty good idea of who was going to win. Then Alex brought the three judges into the back room, came out a minute later, and they made the announcement that it was over. After they made it, they all looked sort of dazed and went, “Hold on, can we think about this for a minute?” Reno had no idea, I had no idea, the other skate filmer and photographer had no idea. Only the HD filmers had known. They didn’t show the footage of Joseph [Varela] trying to fight Alex. The HD filmers and Alex backed out of the door and left. We followed them, but they were already gone by the time we got outside. They had a car waiting. We went into the equipment room, but it had all been secretly cleared out. Alex had tricked me out of the footage I shot, he had asked me to put it on his hard-drive so he could show the people back at High Speed. I never would have given it to him if I had known what he was going to do.

So after they had left, we were just sitting there, glad they were gone, glad it was over. And we decided to have a giant party. The HOV crew brought in tons of beer, invited tons of skaters, girls came, we had a giant skate party. It was fucking rad. I put all the footage on a DVD and we had our own little premiere. The raw edited footage came out to 45 minutes. That’s one week of skating. The kids were animals. They absolutely deserved to have a winner. They weren’t spoiled, they weren’t ungrateful, they just didn’t like being treated as pawns.

Final Words?
One In A Mandible is coming out (part 1 of 4 above). I’m going to try to show a better depiction of what it was all really like, and show the footage that was left out. There are some seriously gnar tricks that went down that haven’t been seen yet. Kennedy, Alex, and Matt are having parts in my next full-length video. Kennedy and Matt are actually moving to NYC in a month, to a cheap apartment I found for them. Alex is coming for a month, too. I went out to SF and filmed with them a bunch there. Those dudes are too rad. All the kids are welcome at my place, any time.

I hope everyone has learned from their mistakes. I hope people will learn to let skateboarding remain a thing for skateboarders. We don’t need anybody else. Fuck them. Skate and destroy.

CHECK OUT PART 2, WITH DIRECTOR ALEX KLEIN HERE AND PART 3, WITH THE CONTESTANTS HERE

Words: Ian Michna
Photos courtesy of: Nathan Perkel
(Check out his website with more OIAM photos here)
Special Thanks: Colin Read
Rant, comment or bitch on our Facebook
Let us spam you on Twitter