GETTING ACQUAINTED WITH EFRON DANZIG 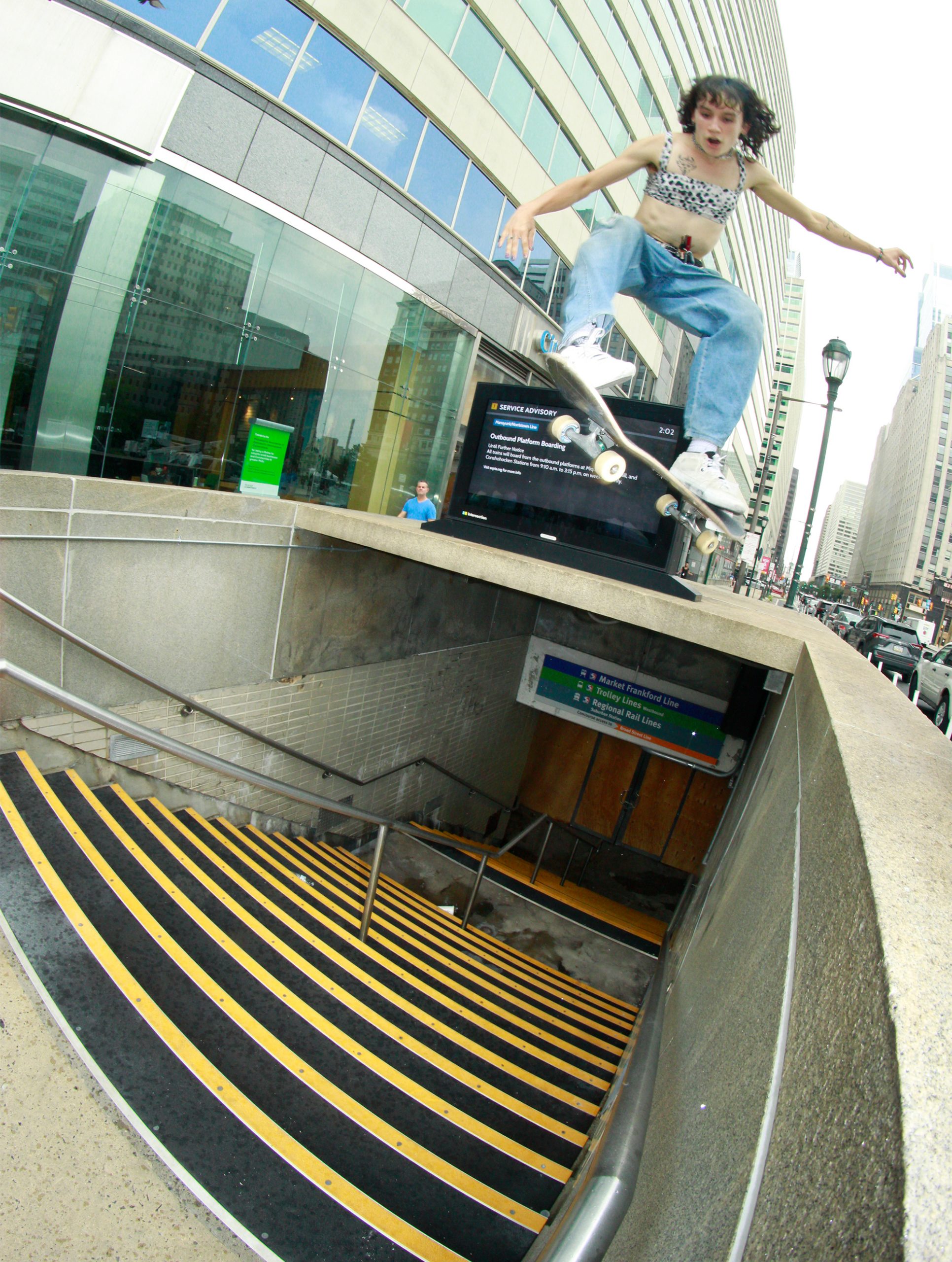 It’s no secret that Philadelphia has produced so many people’s favorite skaters. Josh Kalis, Stevie Williams, and Ricky Oyola come to mind, but unless you’re 30+ years old and have a kid, you might not give a damn about them.

Throughout 2022, Efron was everywhere. She joined William Strobeck’s new board company Violet, featured in numerous modeling campaigns for fashion brands and magazines, and had clips in influential videos like Play Dead, The Violet Promo, and She’s Cheating.

Efron had an intense year filled with new opportunities and constant change, so we figured we’d link with the up-and-comer to hear how she handled the pressure and learn about what she’s got coming up next.

How much money would it take for you to quit smoking cigs, cold turkey?
I want to quit. Maybe $1000 would actually get me to do it. It’s really hard though, I’ve tried a bunch before but the longest I’ve ever gone has been about a month. I got hypnotized. That was the only time I took a break in seven years. I felt a bit better. I could breathe and stuff. Then, I went right back [laughs]. Like pack-a-day right back.

When you get hypnotized, do they swing a clock in front of your eyes and say, “You’re getting sleepy?”
No, it’s not like that. I was conscious the whole time. It was pretty stupid. I mean, it worked for a little bit, but you have to want it to work and believe it. Even if you don’t believe, you have to let yourself be taken away by it.

I don’t know if I want to do it again, but I have to quit because it’s getting hard to breathe so I might [laughs] if that was the only thing that got me to quit for any amount of time. It was a little over a month. I still wanted to smoke all the time. There was just this little thing in my head when I would go to smoke and it would be like, “Don’t smoke.” I guess it was because of the hypnotist, but I don’t really know.

Can you get hypnotized to try a hard trick?
I think you can. Someone could hypnotize you to think that you’ll be okay and safe. You might not actually be safe, but that confidence works. They do hypnosis for public speaking, like if you have to give a speech for a wedding or a funeral, so I assume it’s how it would be for skating. You can get hypnotized to do anything these days! [Laughs] 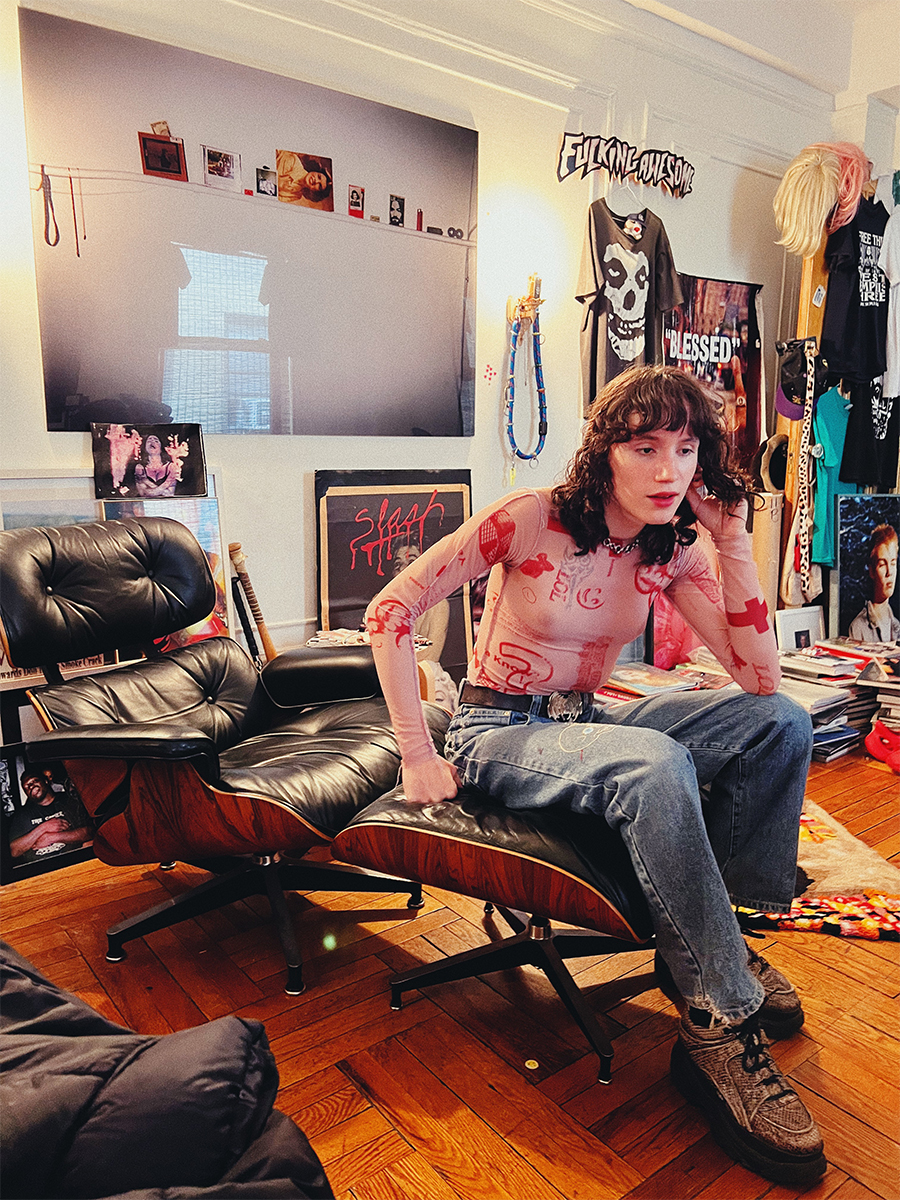 Did you go to college at all or did you start modeling and skating after high school?
The modeling only started last year and I’ve always skated. I went to Temple University for a little bit. I enjoyed going to school and I want to go back. I took a semester off because I was going on tour with my band but COVID happened. I was on unemployment and the tour was canceled so I started skating a bunch. When I started school again, I gave up and was just trying to skate every day. I kind of miss having all that information and learning all the time. I don’t feel as sharp [laughs].

What did your mom think?
She’s really supportive of me. She just wants me to have security. She wants me to go back to school, and I want to go back too, just not right now. I don’t feel the pressure to. I think she’s happy I’m doing my thing.

Who were your heroes or people you looked up to growing up?
I mean fucking Frank-N-Furter from The Rocky Horror Picture Show. I saw them for the first time and was like, “That motherfucker is beautiful.” He’s a psycho but besides the bad aspects of him, he’s just it!

For skaters, I really liked the Lurk video guys. The old Lurk videos are so good. Stu Kirst is my favorite. I wish I could skate like that. His Strangers part. That’s the one. Sickness was on of my favorite videos when I was a kid too. I also love the Melodi guys. Akobi [Williams] is fucking awesome.

Who do you think is one of the most underrated skaters at the moment?
Mike Ward. Mike Ward all day. He’s super underrated. He only tries the hardest shit. He busts his ass and works for everything.

How did you get on Violet?
It was natural. I just met Bill [Strobeck] at Muni. I knew Kris [Brown] already, and Bill was coming up to film for Play Dead. He just kept coming to Philly and we kept skating, then I started going to New York. The winter before last winter, he was like, “Yo I want to start a company.” About a year later, we came out with the promo.

What do you think Violet adds to skateboarding?
It’s hard to say because I’m involved with it, but that’s what I enjoy about Violet, like how involved we are with it. A bunch of us make art so we’re able to work on stuff and show our art through the brand. It’s a nice platform for us to put stuff out there besides skating. Every drop has had art from our friends or somebody that we are a fan of. It’s fun to have videos to work on too. Just going out skating every day, trying to film for something bigger.

Are you making enough money from skating to live off of?
I don’t really make money from skateboarding. There’s a little from Violet though. I’ve been modeling enough to live off of it for a few months now and I’m really thankful for that. I also work at a cute little animal-themed bookstore too. I want to get a place in the city. I’ve been subletting from place to place for a bit now.

I love living here but it’s definitely hard. June through August I was couch surfing, and since September I’ve been subletting different places. I’ve moved seven times since August. I just keep acquiring more shit to so every time I move it just gets harder. My friends are real for helping me move every time. We always say, “This better be the last time,” and it never is. 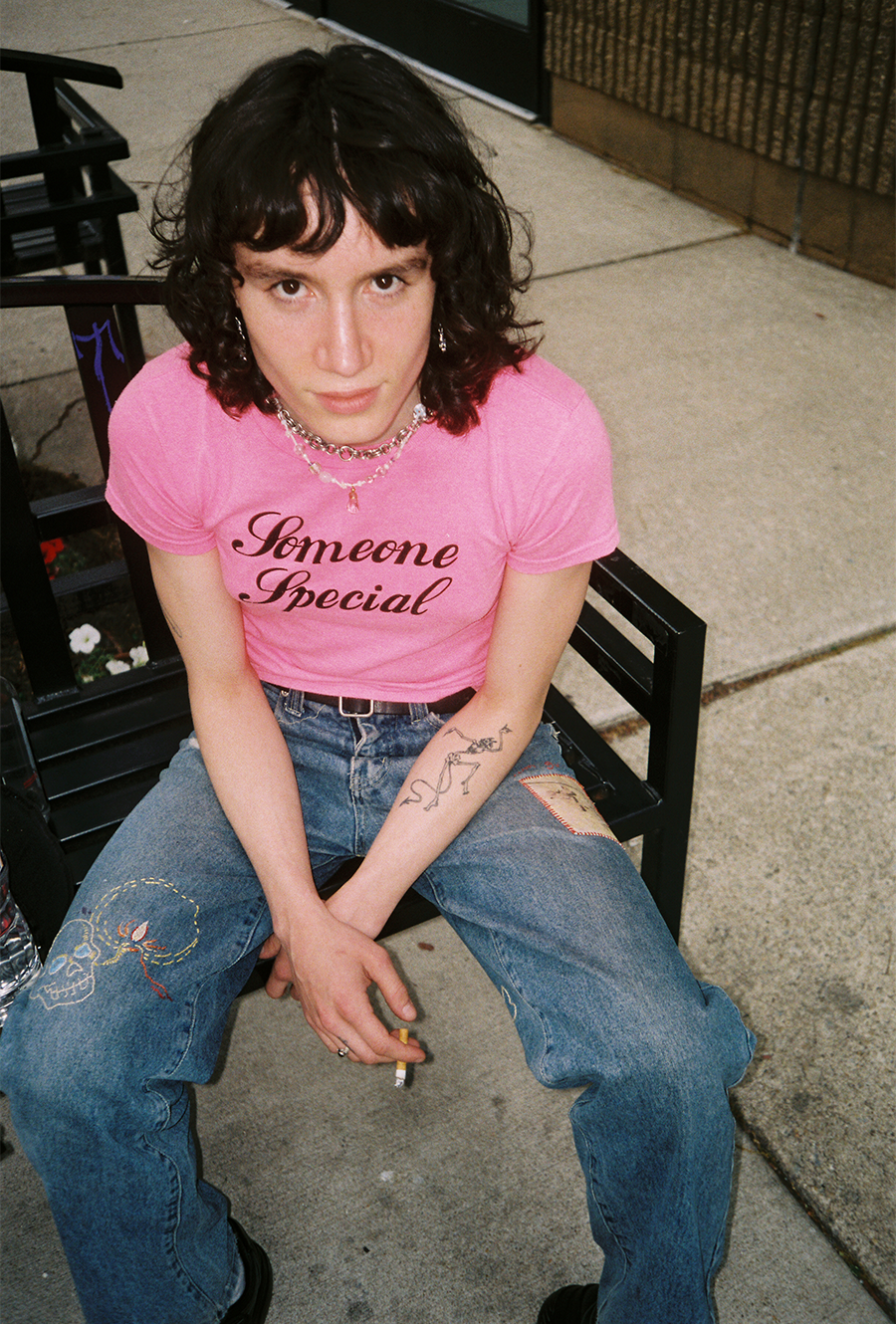 How is the dating scene different in New York and Philly?
In New York, there are just so many random people. Philly is funny because it’s so small that you see the same people all the time, so you can imagine…

Have you ever shown up to a first date with a board?
[Laughs] That would be embarrassing, I couldn’t. I actually definitely have, but not on purpose. That’s something I really try not to do. If some guy pulled up to a date with his skateboard, I would just giggle inside. It’s a bit funny to do that. We can’t both do this [laughs].

I saw that you walked on a runway recently. Were you nervous?
That’s when I started smoking again [laughs]. I was so nervous the first time. I tore my ACL a day before I was supposed to walk for my first show last year. I was excited to be able to walk this time. I was thinking, I can’t fuck this up. I was in these four-inch platforms with sunglasses and these baggy leather pants while walking on wet cobblestones.

In rehearsal, one of the other girls wearing the same shoes as me tripped on the runway which made me a bit more nervous. I was walking like, “Don’t fall, fuck, don’t fall, fuck, don’t fall.” I was relieved after the show, and the next one was way easier. It was kind of like playing a [music] show, where you shut your brain off and just do it. It’s an easier way to cope with it.

Were you high before you walked?
Yeah [laughs]. Because it calms me down.

I heard you roll spliffs with menthol tobacco.
Yeah, I do, and my friends make fun of me for it. But unless I have grabba I don’t know what to do. This is the tobacco I have and I don’t want to smoke a greener.

What’s your spliff ratio?
Before bed maybe 70% weed 30% tobacco, but when I’m out like 60/40. Sometimes I get a little anxious when I’m high so I’ll use less weed when I’m with people. 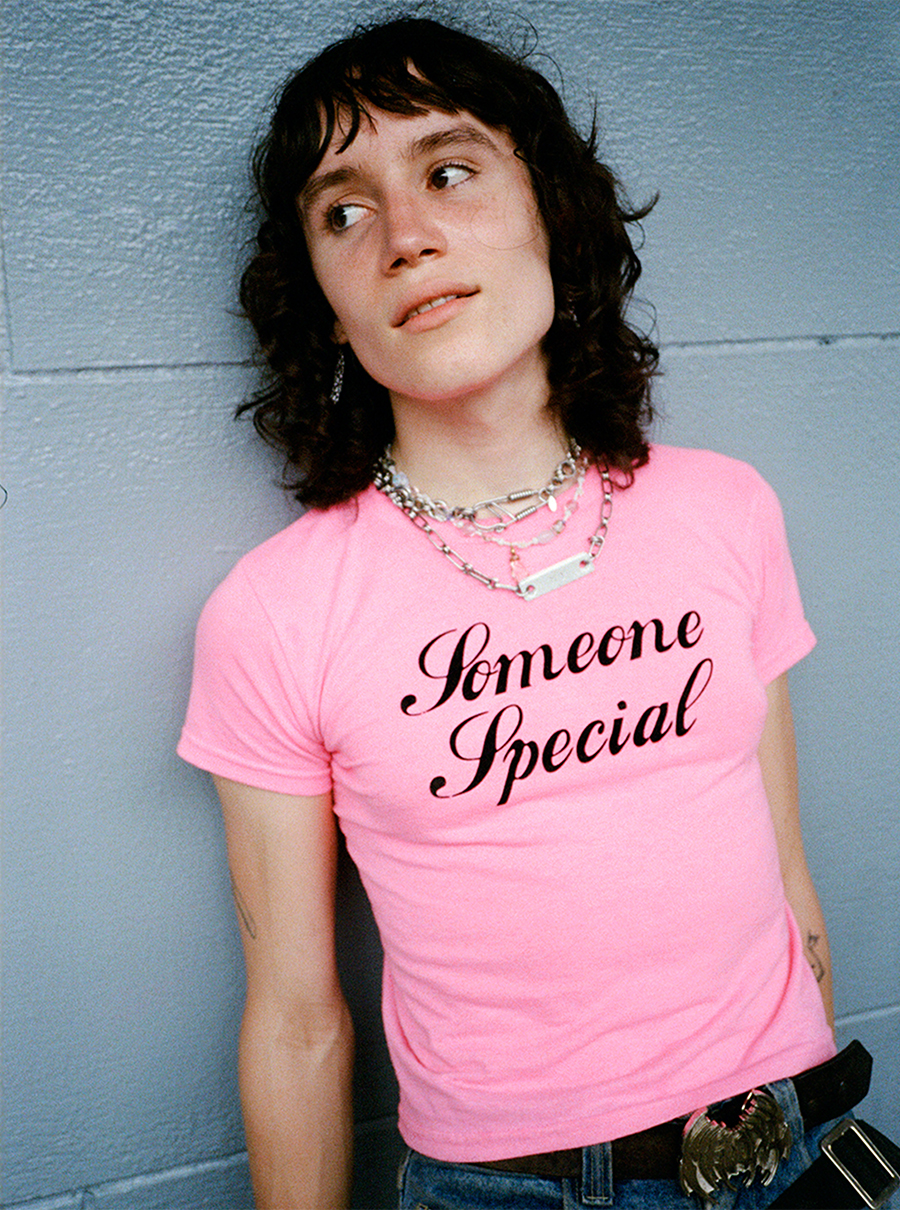 How do you deal with Instagram comments? Positive or negative, it can fuck with you, no?
[Laughs] People are so funny. It’s cool to see nice stuff, but I don’t want to be affected by what internet people think. For the most part, a lot of the negativity is just plain transphobic. It’s strange to me how many men care about me enough to say the things they say. I’m some trans girl who skates. Like, so far away from them.

Skating is strange. There are a lot of weird dudes seeing you. You have to take the shit on the internet with a grain of salt. Like, maybe it’s better to not know what thousands of random people think of you, good or bad.

What about gatekeeping, does skating need a bit of gatekeeping?
No. Just mind your own business. Be nice or funny, I don’t know. These dudes are so serious and salty, like, have a heart.

Over the last two years, since you’ve been introduced to the skate world, has anything changed about your worldview?
It’s a hard question because my overall worldview has changed but it doesn’t have to do with skating, it’s just from getting older maybe.

Are you more cynical or hopeful these days?
Ah, cynical and hoping.

It seems like the queer skate community is really tight, how do you all make it so special?
We’re just close-knit. One of the first queer skaters to reach out to me was Chandler [Burton]. They got me out to California last year and that was the first time that I skated with a bunch of other trans people or queer skaters. It was a great experience. There’s so much love and everyone is supportive of each other. That’s what the skate scene at large is missing.

Last question. I have to know, what does “serving cunt” mean?
[Laughs] Oh my god, like, you are just that bitch. I can’t even describe it. Like if you pull up and someone is like, “She is just serving cunt,” or, “Oh that’s cunty!” You just know when you see it.