CAPTURING THE GRIT OF NYC ON FILM WITH PHOTOGRAPHER JACOB CONSENSTEIN 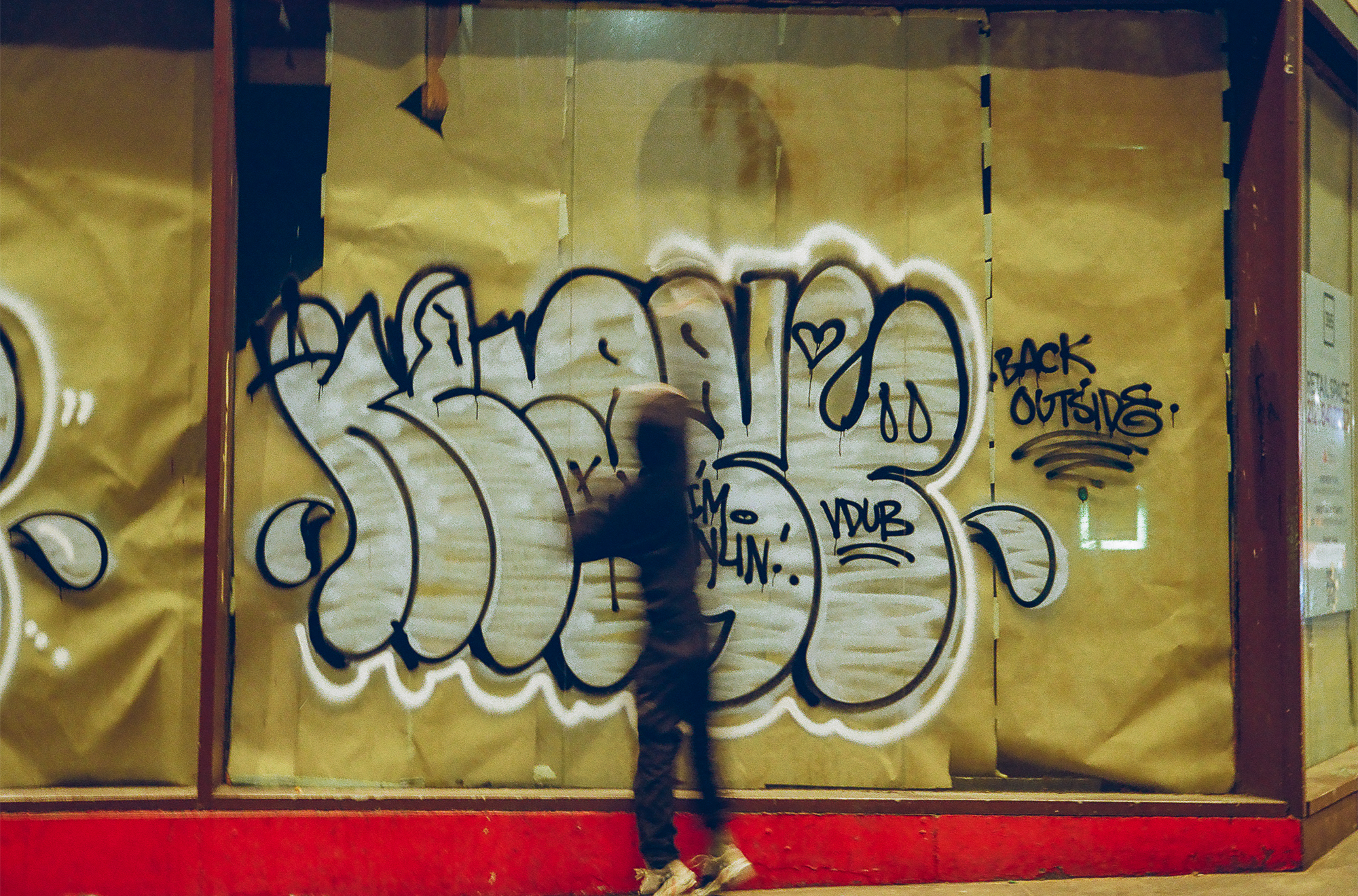 Skateboarders are freaks for nostalgia, and accepting new things like basic modern technology is something we don’t do very well. If you need convincing, just remember that the two “industry–standard” video cameras are both decades old at this point.

With that in mind, it’s no surprise that over the last few years, we’ve seen more and more skaters lean into 35mm film cameras to shoot everything from parties, to skate photos, to tastefully grainy portraits of their friends. Obviously, not everyone doing so is the next Garry Winogrand, but hey, at least they’re flexing the creative part of their brain.

Jacob Consenstein is one of the few photogs out there experimenting with film that we feel does the medium justice. He’s a life-long New Yorker who has been documenting his city and culture for years now. During that time, he’s been capturing portraits and live photos of well-known and underground artists, skaters, musicians, and cultural icons, but also shooting street photography across every borough, capturing life in a way that paints an authentic and candid photo of life in New York, similar to Robert Frank’s famed work in The Americans.

Most recently, Jacob released a photo book titled Half God, which features photos of his childhood friend and hip-hop artist Wiki, aka Patrick Morales, along with photos that encapsulate their everyday lives in New York. He also has an upcoming solo show called “Keepsake” hosted at Micro Service Gallery from October 15-30th.

This one is definitely for the photo nerds out there.

Why do you think every New York skater in their late 20s and early 30s has a 35mm camera?
Unfortunately, I think most people, including skaters, own a film camera because it’s trendy. It comes down to whether you use it to take photos or use it as an accessory or a personality trait. People who have them to take a ton of photos have it for the right reason. I encourage everyone to invest in a point-and-shoot, it’s an incredibly rewarding and immersive approach to photography. A lot of our current culture revolves around photography and it’s valuable to document your life. You never know what can come of it.

Why do you shoot on film as opposed to digital?
Film was the first medium of photography that I was exposed to. My father had an old film camera that belonged to my grandfather lying around the apartment which always intrigued me. I started taking photos with stolen disposable cameras. I racked hundreds of them over the years and photographed parties, friends, and graffiti. I brought the cameras to CVS to be developed and I fell in love with the process of waiting for images to come back, picking up the 4×6 prints, and stealing more cameras.

My friends gave me my first real SLR, a Pentax K1000. Since shooting the first roll of film on that camera I have not stopped. I was making work with no references, no knowledge, and little ability. I was working based on intuition and circumstance.

I was never very interested in digital photography as a medium. It felt too sterile and didn’t give me the same fulfillment as film. The overall texture, color, and vibrancy of images made with film can be only emulated by digital post-editing. 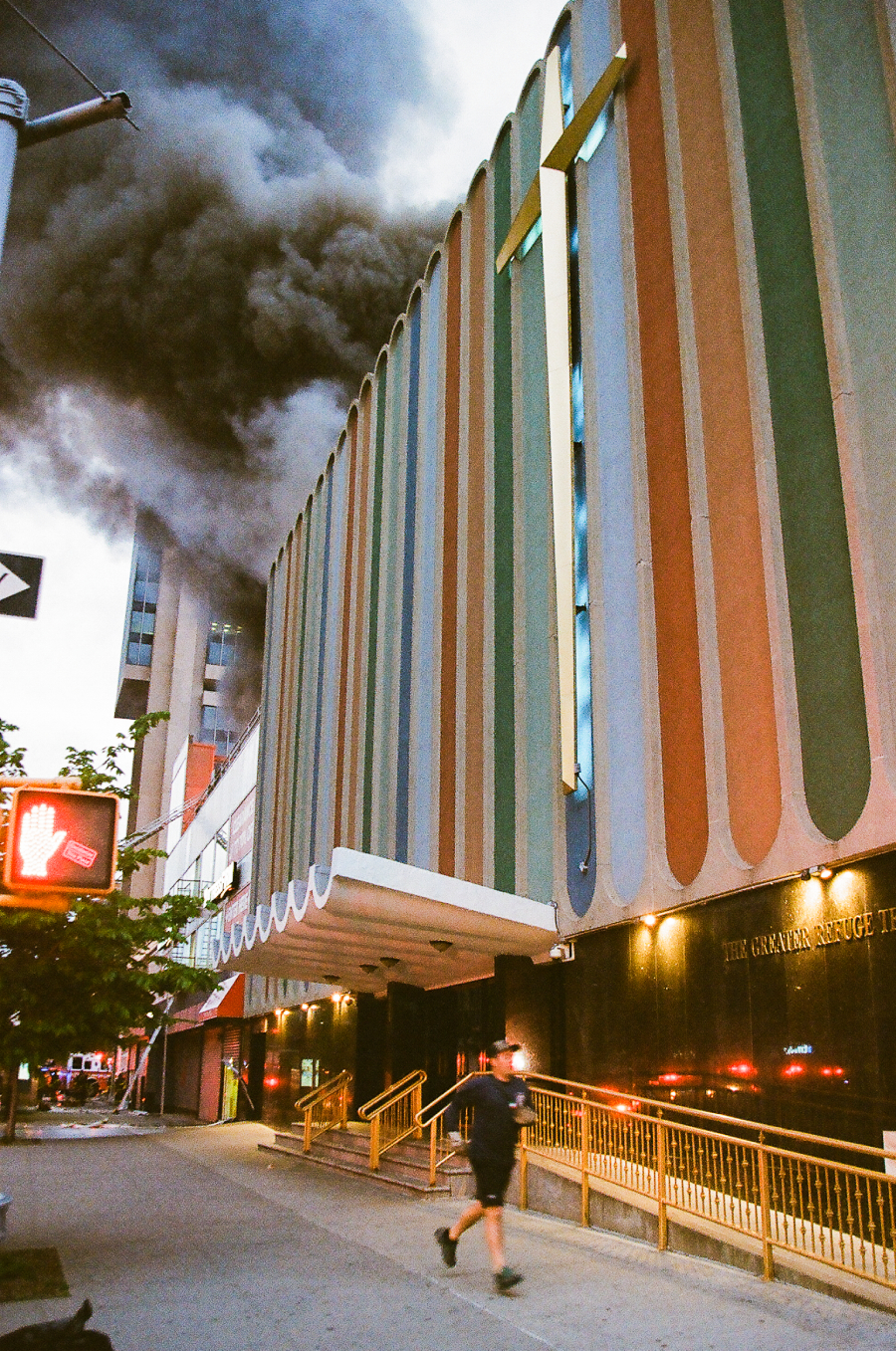 With the price of film rising are you looking for cheaper options?
I don’t think so, even with high prices and scarcity, film is still in high demand. I think it’s just a moment we are in. Personally, I still spend the money. I think most film photographers would agree.

You have a new book documenting Wiki while he worked on his new album. What was the process like documenting him?
Pat [Wiki] and I would link up to photograph in the mornings typically after late nights or studio sessions. Some days we would link up just to talk and it would evolve into a photo session. One of the most memorable sessions was the day we set aside to photograph Wiki & Sage [Elsesser, Navy Blue] together. Their admiration and appreciation for each other was apparent, immediately. We started on Wiki’s roof where the iconic shot that announced the album was made. Sage let us know that he had signed a big record deal the same day and made it his mission to take us out for pasta in celebration. We walked over to an Italian spot and sat down for a big meal. It was a perfect summer day. To me, it felt like everything was coming together. 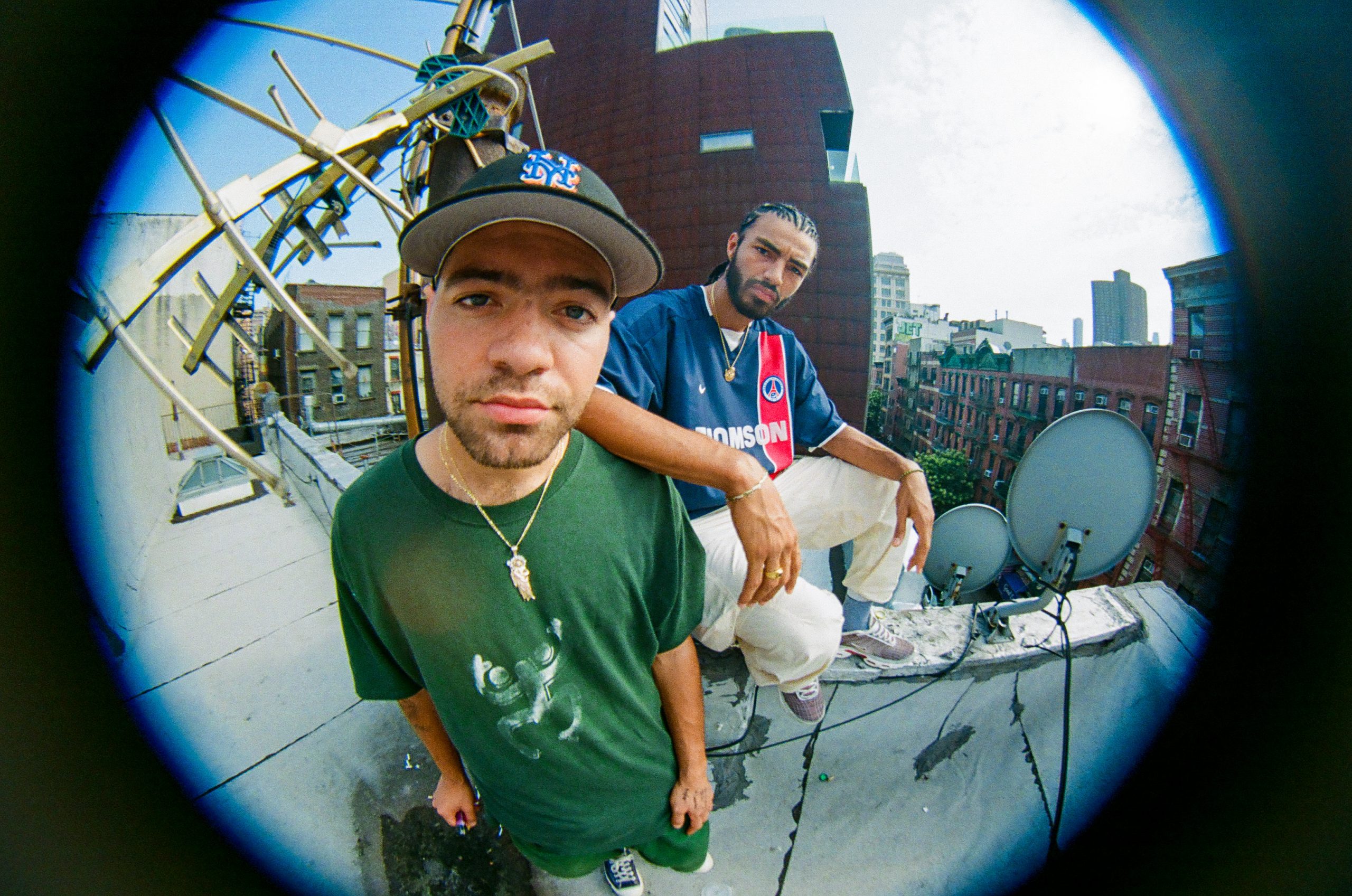 I know the book includes influences from your upbringings, was there something you both especially wanted to include?
Wiki and I wanted the book to be something meaningful for both of us. We grew up only a few blocks apart from each other so we shared many meaningful influences and childhood references. Our first meeting to conceptualize the book took place at Landmark Diner downtown.

We listed locations, nuances of the neighborhood, and practices that could give readers a sense of Wiki’s upbringing. We wrote everything out on a receipt that I scanned and included at the beginning of the book. We were adamant about including the monument, the subway, his mom’s crib, a trip downtown, and of course, his roof.

“All of the family-owned businesses and poorer demographics have been relocated or destroyed.”

Being that you were born and raised in New York City, is there any rawness left in New York or is this just a city where well-off transplants move now?
Gentrification has changed so much of the New York that I grew up knowing. The Upper West Side was extremely diverse and vibrant. It contained all walks of life ethnically and economically. Both the richest and poorest inhabited the area along with everyone in between. Now, visiting that neighborhood feels sterile and foreign. All of the family-owned businesses and poorer demographics have been relocated or destroyed. I find that in many neighborhoods throughout the boroughs. Especially now with the current housing crisis post covid the economic gap in New York is more present than ever.

I believe that a lot of the city has lost its rawness but the pockets that remain raw are even more potent than before. The people combatting the whitewashing of New York are more substantive, interesting, and valuable than ever. Those are the pockets of subculture that will eventually leave their mark in long-lasting ways. The rawness still exists, it’s just harder to find. 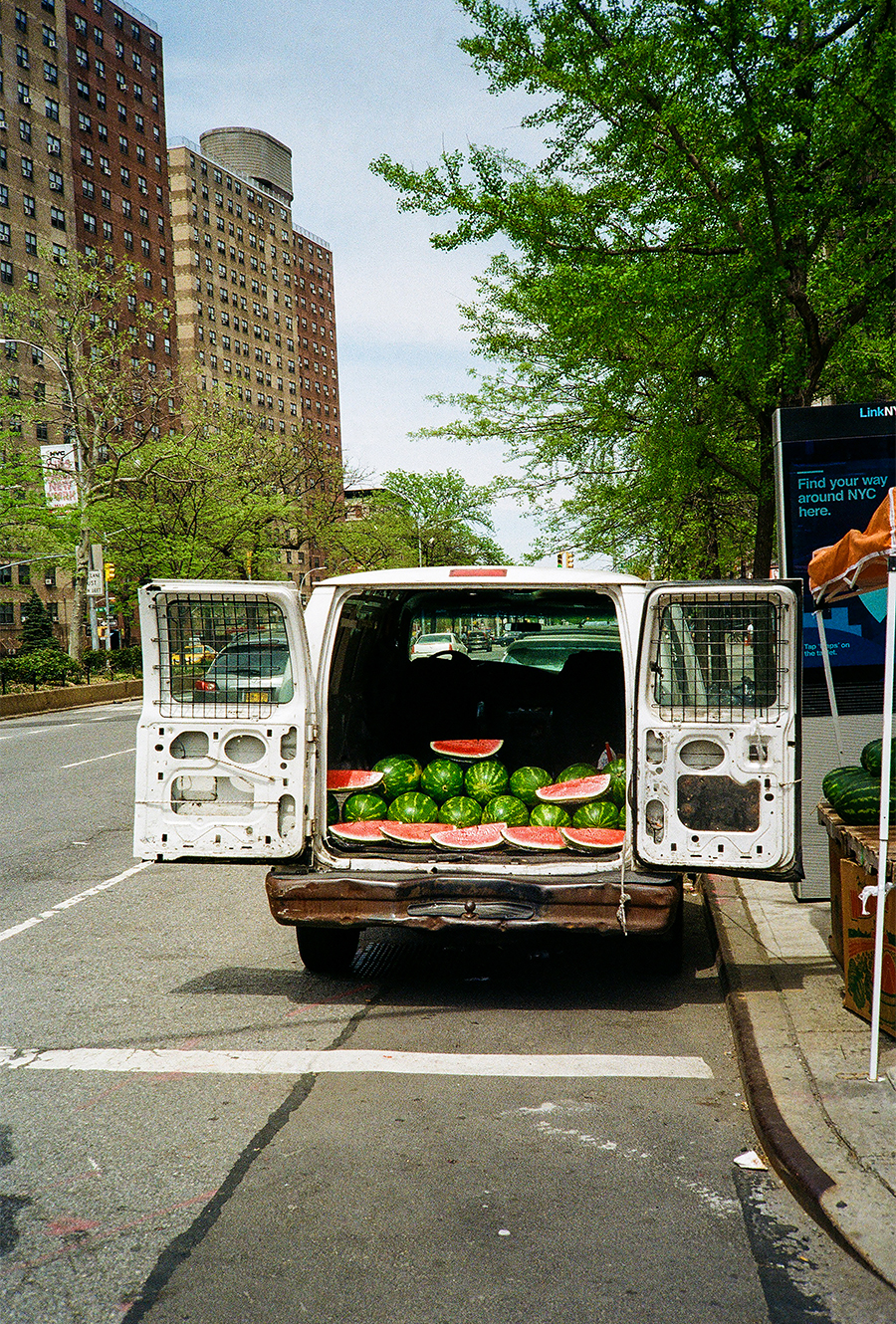 Where are these pockets? Do you think they will all eventually fade, and everything will become like Williamsburg?
Places that incubate creativity and community, such as art studios, retail locations, small businesses, music venues, mission-driven initiatives, and skate spots. Any space people can exchange ideas and common interests. These spaces create tight-knit groups with high output of art, events, and culture. These environments exist all over the city in varying forms.

Right now most of these spaces are in Brooklyn; Bed-Stuy, Crown Heights, Bushwick, and Ridgewood. Manhattan is not affordable at the moment so it is hard to create spaces like this. Most of Brooklyn is pretty priced out too. I believe these spaces will always exist in some form, and community and creativity will always win. 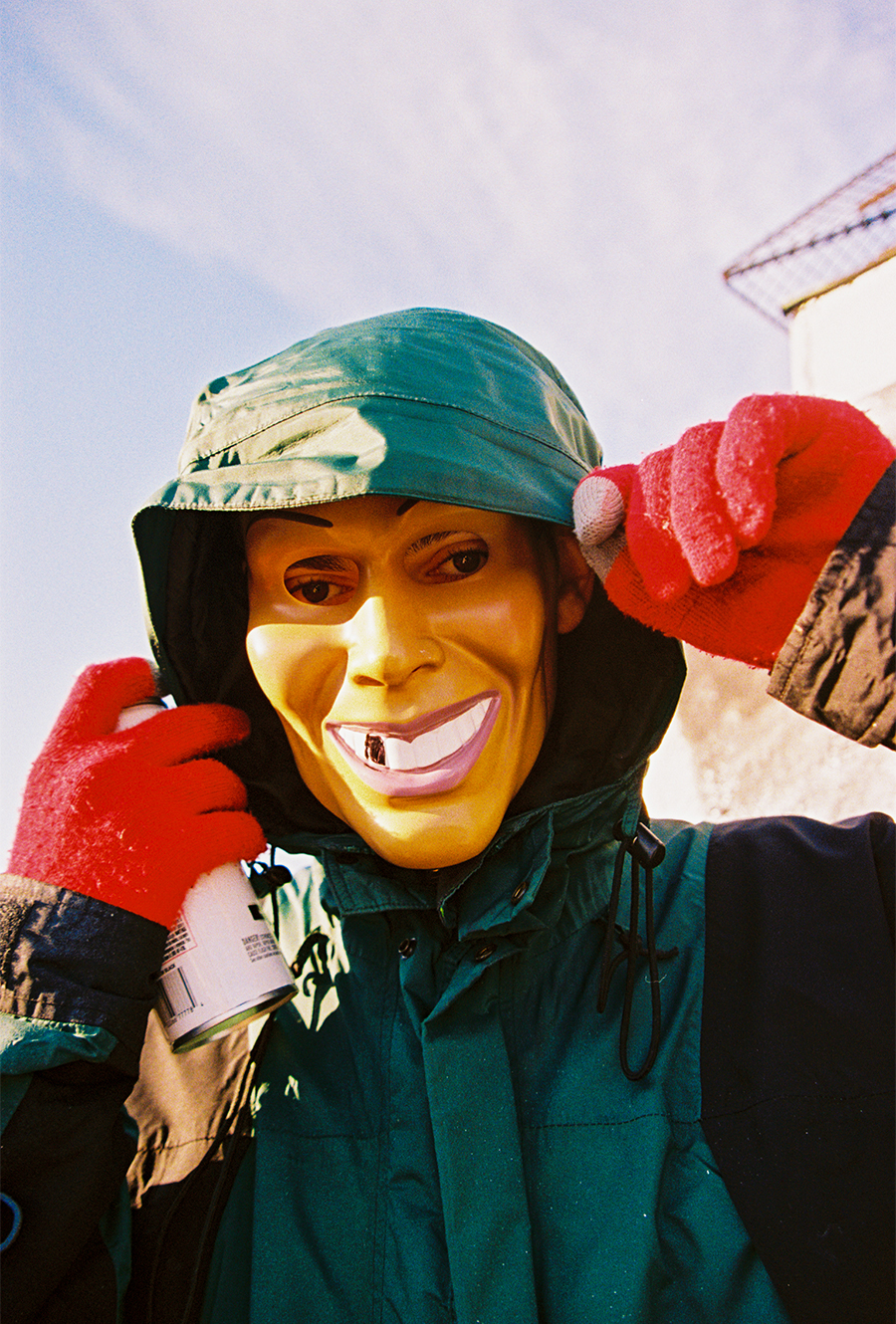 What’s the most important non-technical piece of advice you can give to aspiring photographers or beginners?
The first thing I always say is to learn about photography. Read about the greats, go to shows, see what type of photography is being made, and seek out contemporary artists making work you like. This will help someone just starting photography figure out what type of work they would like to create.

Second, hone in on the subject matter of your work. Ask yourself, what inspires me? What are the substantive aspects of my life and personality that I would like to express? What makes my perspective a positive contribution to the canon of work being created? Make the work you would like to see in the world. Photograph every day. It will build from there if you have what it takes, trust.

“Ask yourself, what inspires me? What are the substantive aspects of my life and personality that I would like to express?”

How much of a hustle is it to make a living through photography?
I have always had a full-time job while pursuing photography. I have worked as a server, retail, PR, and marketing for various brands along with a handful of internships throughout the years. Don’t be too proud to get a day job to support your hustle. In the end, the stability and discipline it takes to do this will pay off. I quit my job about six months ago, so this has been my first period of time pursuing photography full-time. So far, it has been a ton of hustling and growing pains. Thankfully, I have been busy with both commercial and personal work.

The most helpful step I have taken for both productivity and my mental health has been moving into a studio space. I finally moved my work space out of my bedroom and I no longer physically live with my work. I recommend this to any artist who is in the position to do so. For younger photographers, I recommend pinpointing the type of photography you want to do and beginning to offer your services to brands and people you admire. The best way to get work is to do work! 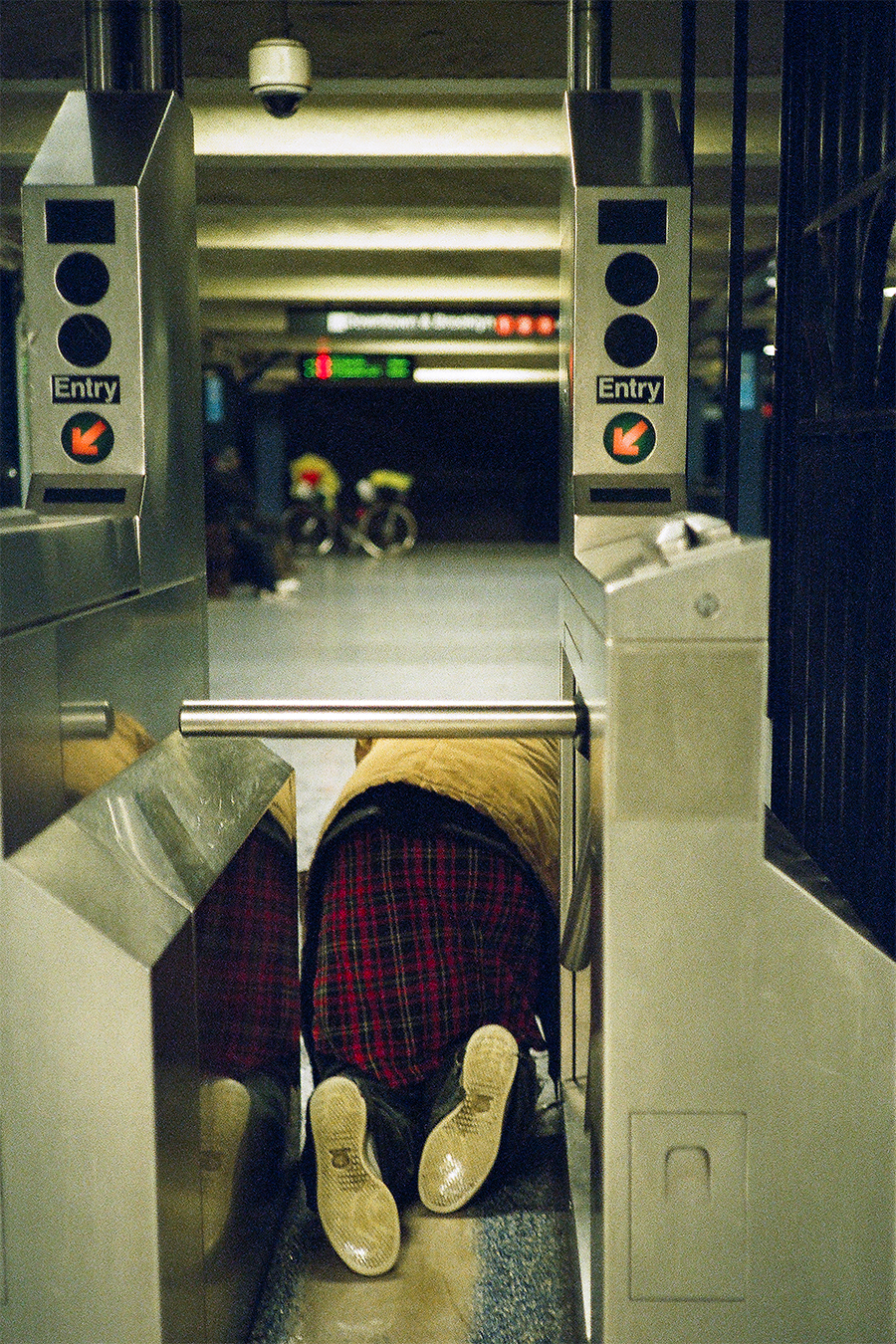 With friends and family, I tend to have fewer boundaries because our relationship carries itself with consent. Photographing artists in their spaces, I make sure not to show any work they don’t want to be shown. Your intention and approach to photography are everything. Make sure you set rules and boundaries with your craft.

What are your thoughts on Instagram’s effect on photography and the way people engage with photos?
I have varying opinions about Instagram and social media in relation to photography.

As a whole social media’s effect on the traditional ideas of photography has been detrimental. Photography used to be a very specialized skill and art form. Now photography is the most accessible medium. There are more “photographers” than ever before. This has resulted in an over-saturation of the space. A larger mass always results in more intensely polarized counterparts. In this case, it has resulted in an increase of terrible photographers and people who interact with the art form disagreeably.

It has also resulted in an increase of incredibly talented photographers who are making huge improvements to the art form. Photography does not exist in the same space it used to and we must navigate to find our own approaches that reflect our mission. The traditional ideas of photography have evolved. It sucks to see the old ways be overlooked. 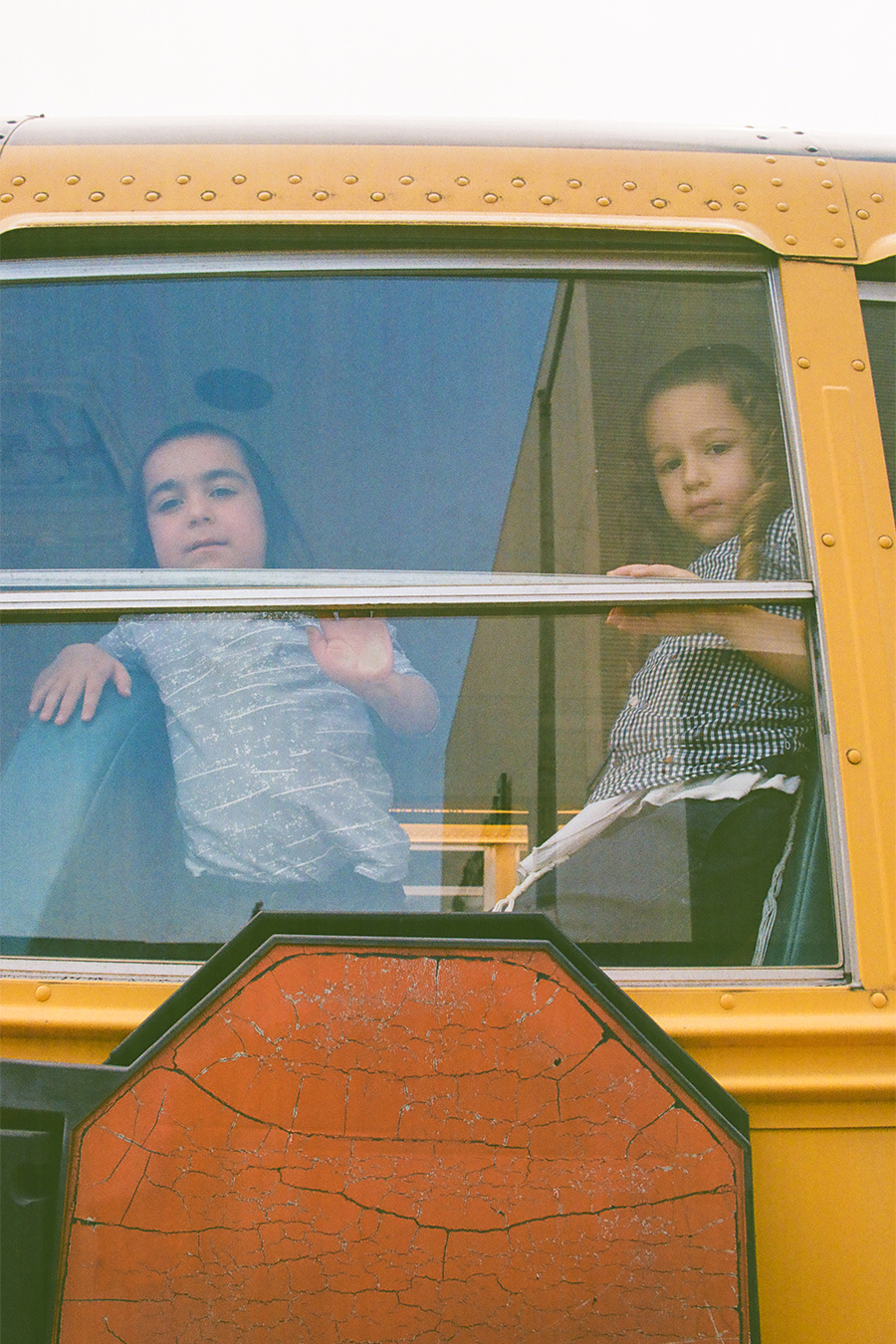 Who are some photographers or artists that inspire your work?
I’ve been on a photo book binge recently so I’ve been discovering new artists. But some of my favorite photographers are Vivian Maier, Dawoud Bey, Jamal Shabazz, Richard Sandler, Ari Marcpolous, Jason Nocito. there are so many. I am also heavily inspired by graffiti, fashion, and design.

If you could shoot a portrait of one historical figure (dead or alive) who would it be? Why?
In an effort to manifest this – I will say on the record, I would love to shoot Frank Ocean. I’m sure this is a common answer around the industry but I just love everything that man does.

If I could photograph one historical figure who has passed I would have to say Big L. He has been my favorite rapper for my whole life. I love his loyalty for Harlem, 139th St. and Lenox holds so much weight uptown to this day.