BEHIND THE SCENES OF WKND’S MOST AMBITIOUS SKIT TO DATE

Stupid skits used to be a mainstay of skate videos with terrible acting from your favorite pro skaters (and sometimes least favorite). However, these days, the skate video skit has mostly fallen to the wayside and been replaced by shitty tiktoks. But, like any great ancient art form, there are still people out there working hard to keep it alive.

Even before creating WKND, Grant Yansura was filming and working on half-baked skits with his friends. Since then, both the quality of the videos and the skits themselves have increased from half-baked to totally baked. Typically the modern WKND skits are parodies of famous movies, but Bottle Neck Sewage is their most ambitious project yet. Reminiscent of The Search for Animal Chin, Grant weaves together Jordan Taylor and Alex Schmidt’s incredible parts with vignettes of the team traveling down the LA River in a makeshift boat.

Jordan and Alex delivered five-star performances as they risked discovering a new variant of every disease known to man by going anywhere near the waters of the LA River to fulfill Grant’s crazy vision. While Grant and the crew waited for their toxicology reports, we talked with them to figure out if the joke of sailing down the gunk was really worth it. 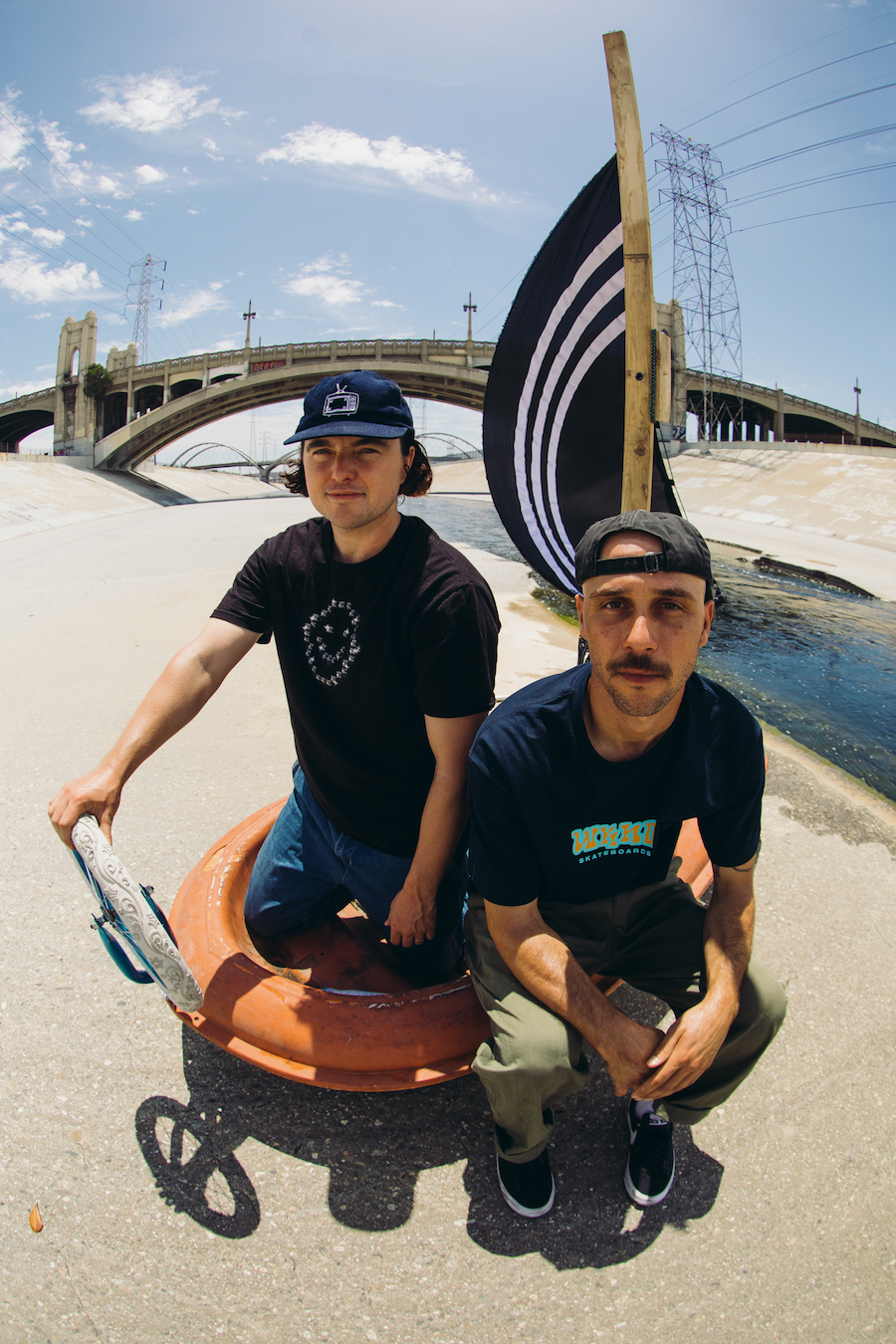 What makes a good skateboard video skit?
Alex Schmidt: Shit, that’s hard to say. It all depends on the concept and how it’s done. They can easily turn out corny, but we like to think WKND skits end up funny and re-watchable. Having a crew that’s enthusiastic about making them goes a long way.

Grant Yansura: Who knows? I try to keep dialogue to a minimum. Once you get too much dialogue going it can get hard to pull off. Some people on the team can definitely handle lines though. Jordan’s always good and Alex has a really good window after a tall can of beer.

What is your favorite skit from a video you didn’t make?
A: One that stands the test of time is The Chocolate Tour. From start to finish the skit translates and how it shows some of the crew as old men is so good. Not to mention, the amazing skating in between it all creates a unique vibe for a video. Plus it’s an LA-based brand like WKND. That shits inspiring for sure.

G: Growing up all the skits that Girl and Chocolate did always nailed it. The random short 16mm skits in the CKY videos have also stuck with me over the years. Man, Matt Price made a skit back in the day spoofing the Can’t Hardly Wait movie, Can’t Hardly Skate. That one is gold.

What do you think sells more products, a good video part or a good skit?
A: I’d say both. Skits create a good opportunity to show a different side of the riders. I think that makes us more relatable and leads skaters towards buying some WKND shit. I honestly don’t know though.

Jordan Taylor: I would like to think a mixture of the two. But at the end of the day, if the skating sucks, people will know right away [laughs]. It’s easier to be a little more lenient with skits.

G: If you see someone’s personality in a skit you might pay more attention to their skating. I don’t think we’re organized enough to know the correlation in sales though. 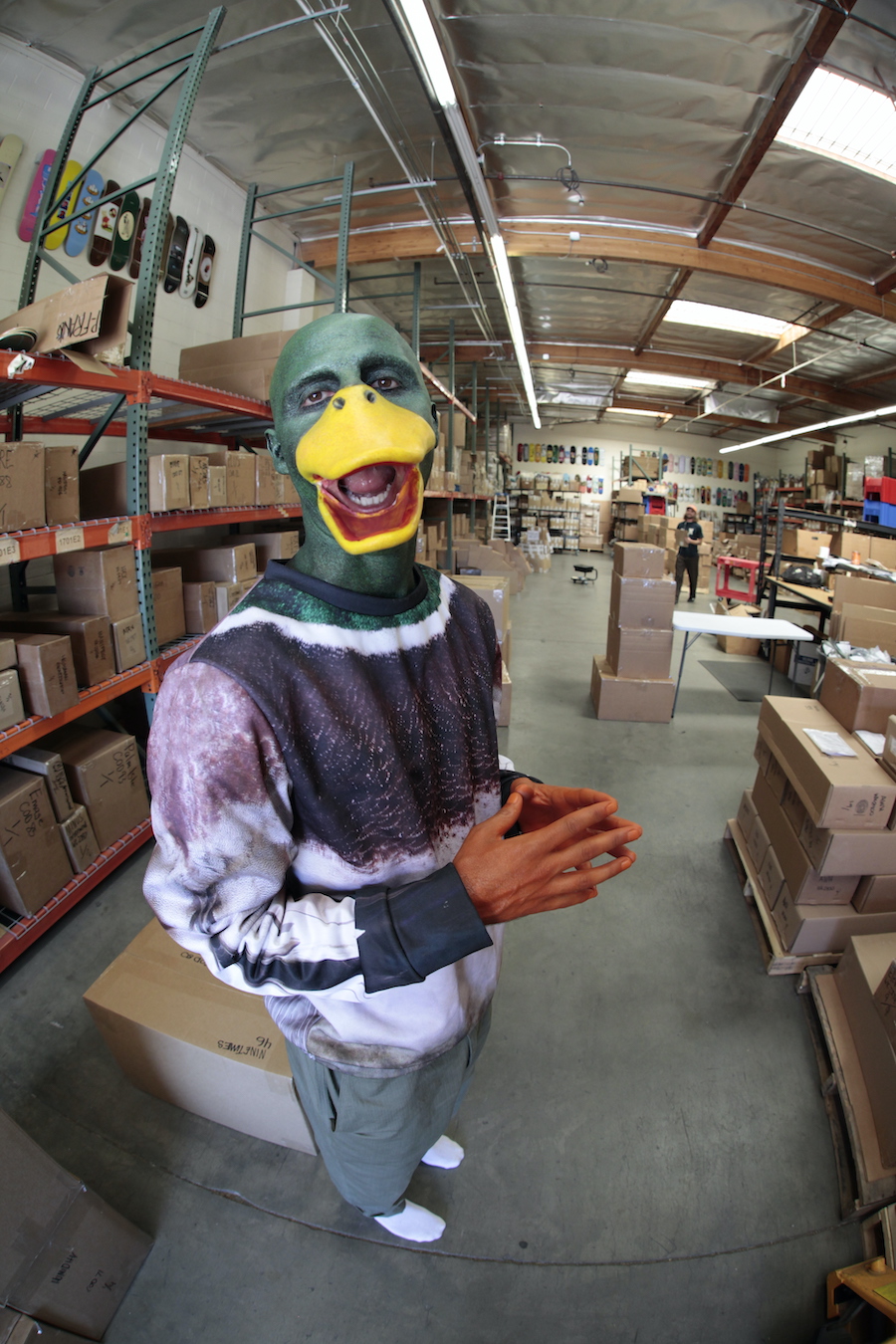 Who came up with the original idea for the video?
A: I’m pretty sure it was Grant’s idea. Once Jordan and I committed to the skit, the three of us went and scouted locations on the river, and Grant started writing each scene shortly after that. It took way longer to finish than we thought. WKND always makes skits but usually, they are parodies of movies we all like. This one was bringing more of Grant’s original idea to life. Having Jake Frank help with production made it all possible.

G: I thought it might be interesting to weave a skit in and out of a skate video so I was trying to think of a way to do this. This idea came about while sitting in traffic next to the LA River. The hardest part was starting the idea on the river since we don’t usually skate ditch spots. We just had to get it started, then I knew Jordan and Alex’s personalities stuck on a boat together could work out well.

J: Alex and I had talked about doing a similar idea based on Dumb and Dumber with a moped traveling throughout LA but then it turned into the boat and the LA River.

G: I remember them bringing up something with the Dumb and Dumber idea which could have been cool too. I like remaking movie scenes but it’s also nice to come up with original skits sometimes too. Having said that, there are definitely plenty of small movie references in this one. Curious to see if anyone will notice any of them.

Who made the boat and where is it now?
G: I got the boat on Craigslist for $40 and the bike we used for parts was $10. My girlfriend sewed the three-stripe flag and Andrew Considine engineered the mast, steering wheel, and rudder. Once we finished shooting, my girlfriend and I took the boat down the river. We probably didn’t even make it a mile before it got too rocky and we were stuck. I just left it there to R.I.P. somewhere.

Did anyone get any fucked up infections or anything along the way?
J: Somehow, no. But I wouldn’t be surprised if someone grows an extra appendage in a month or so. 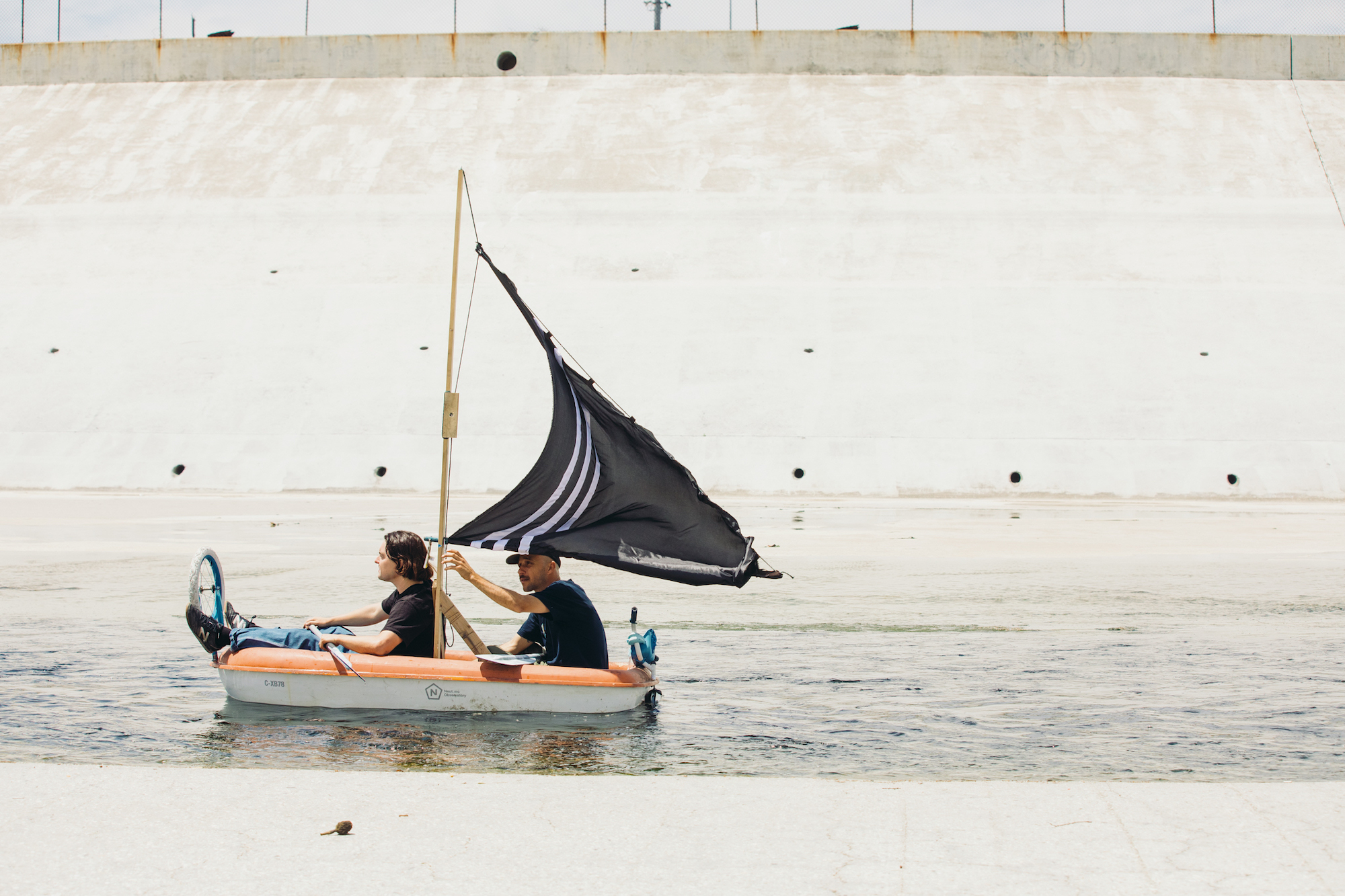 Trash bag waders seem like a good idea on paper, but how well did they actually work?
A: Not well at all.

J: They seemed genius at first but they only worked for about 100 yards, after that they were just water balloons tied around our feet.

Does filming these skits ever get in the way of skating in the streets?
A: Yeah, I’m juggling work in between filming skits, video parts, and life in general outside all this shit. It ain’t getting easier, but it’s always worth it.

Have you guys ever said no to one of Grant’s ideas for being too dumb or crazy?
A: Probably not or this video wouldn’t be happening [laughs]. I’ve trusted Grant since the beginning, whatever we do he’s gonna hook it up visually.

J: We just go along with his ideas, and he’s had some crazy ones [laughs]. I think everyone trusts his vision so we play along and do our best. I love making them whether they suck or not.

Has a skit ever crashed and burned?
A: There was a skit we made introducing two new ams that didn’t make the cut. I guess it wasn’t that funny. They ended up quitting.

G: We did this Christmas table skit that was written totally different than it came out. Originally it had a “grown ups” table conversation that was mirrored with a “kids table” version of that conversation. We had to change it up a bit because the “kids” refused to say lines that I wrote for them. Apparently, they don’t say “gas” anymore. “Gas” was the month prior, now things are just “mid” or whatever. I just ended up using dumb things they said and had a voiceover written to guide the whole skit. A little workaround. 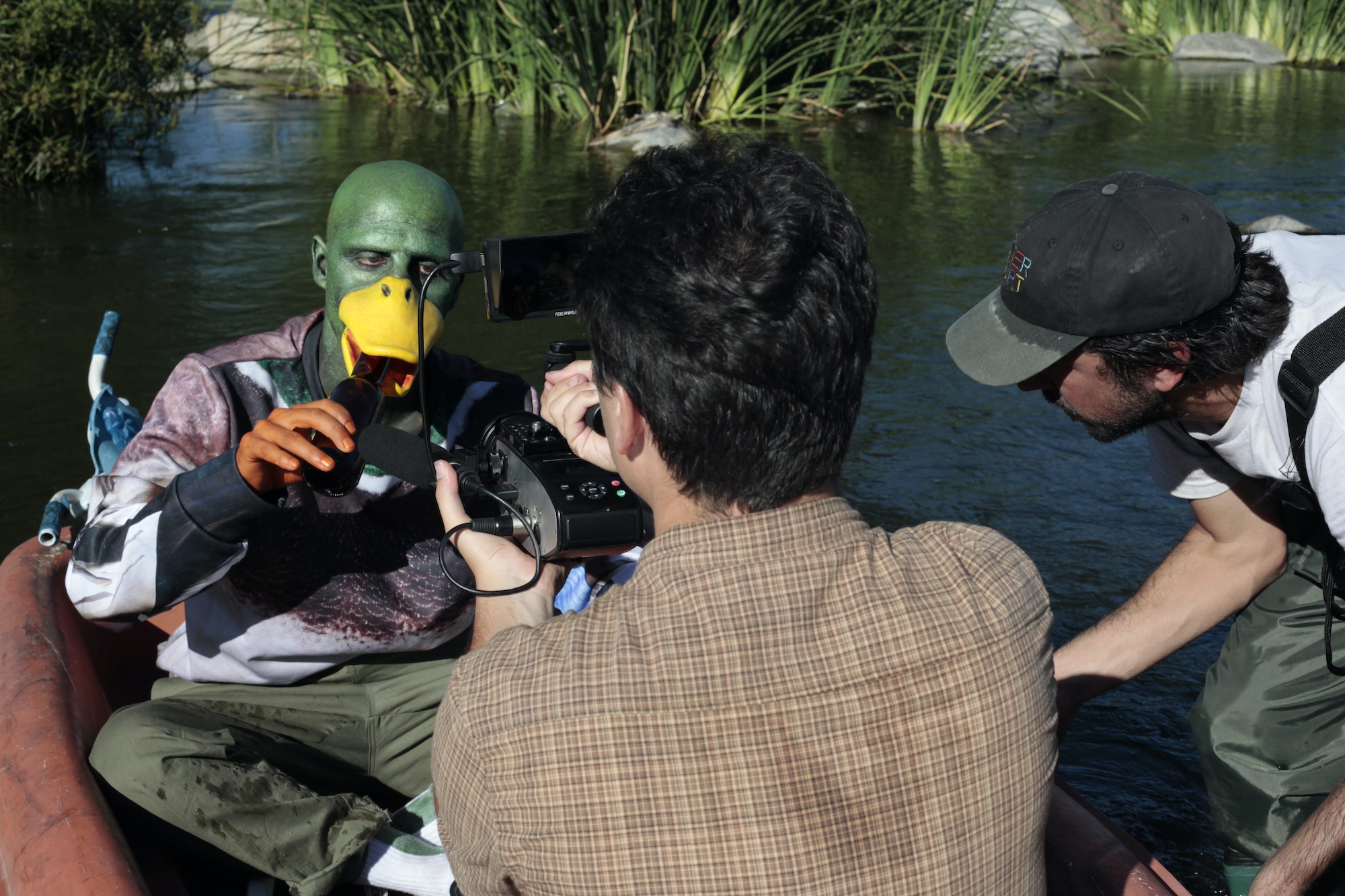 Who is the best and worst actor in the WKND crew?
A: Jordan [Taylor] is pretty damn good, he just knows how to zone out and get into whatever character. If you skate for WKND, you kinda have to be down with trying to act so thinking of the worst person is kinda hard. At first I thought Tom K might have a hard time with it when we made his American Psycho intro parody, but he killed it. Trevor is trying to avoid some of the skits too, but he’s better than he realizes I’d say.

J: Best is probably Taylor Caruso. He hasn’t had huge parts, but he always nails his lines. He would be a great actor, I think. Worst is maybe one of the jits, but I won’t name him. The Guy will get better…

Would any of you actually eat something out of the LA river?
J: Personally, if I thought that joke would hit hard enough I might. But then again, I don’t want a third leg.