A LOOK AT ONE OF THE MOST IMPRESSIVE PERSONAL SKATEBOARD COLLECTIONS 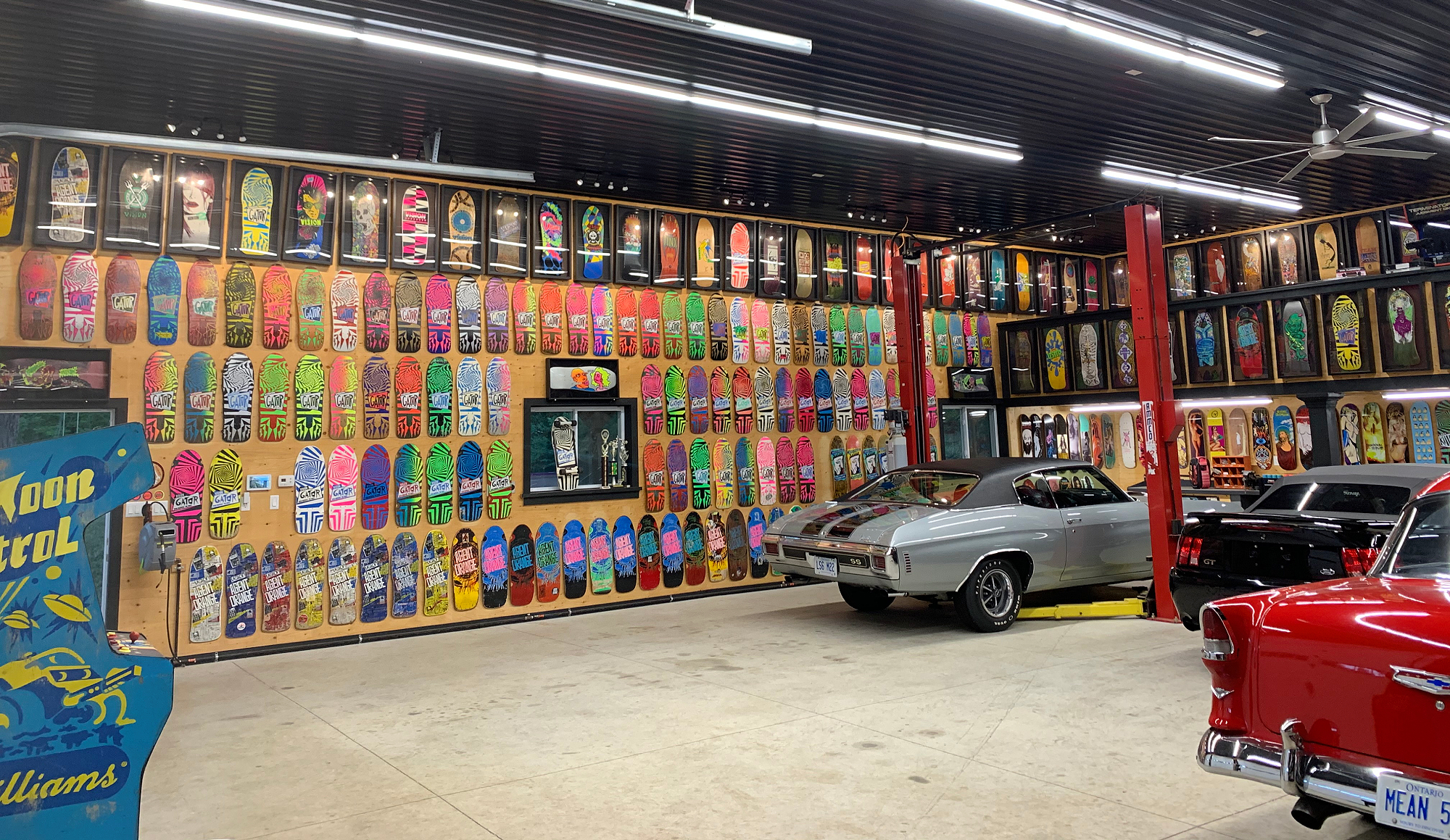 Last month we spoke to three deck collectors with extensive collections to hear about the ins and outs of the game. As none of us in the Jenkem office are serious hoarders we learned quite a bit from the old heads who were down to talk. One person we weren’t able to include was a man named James Lamb, who apparently had such a wild collection that many considered him to be a “whale collector.”

As it turns out James has been buying decks seriously for nearly a decade and has since built up a garage that resembles a small museum. Not only does he have hundreds of thousands of dollars of boards but his space in Ontario, Canada has unopened Grey Goose bottles, classic American muscle cars, and an indoor bowl. Curious to know more about this man cave on crack, we finally got in touch with him to learn about the human behind it all. 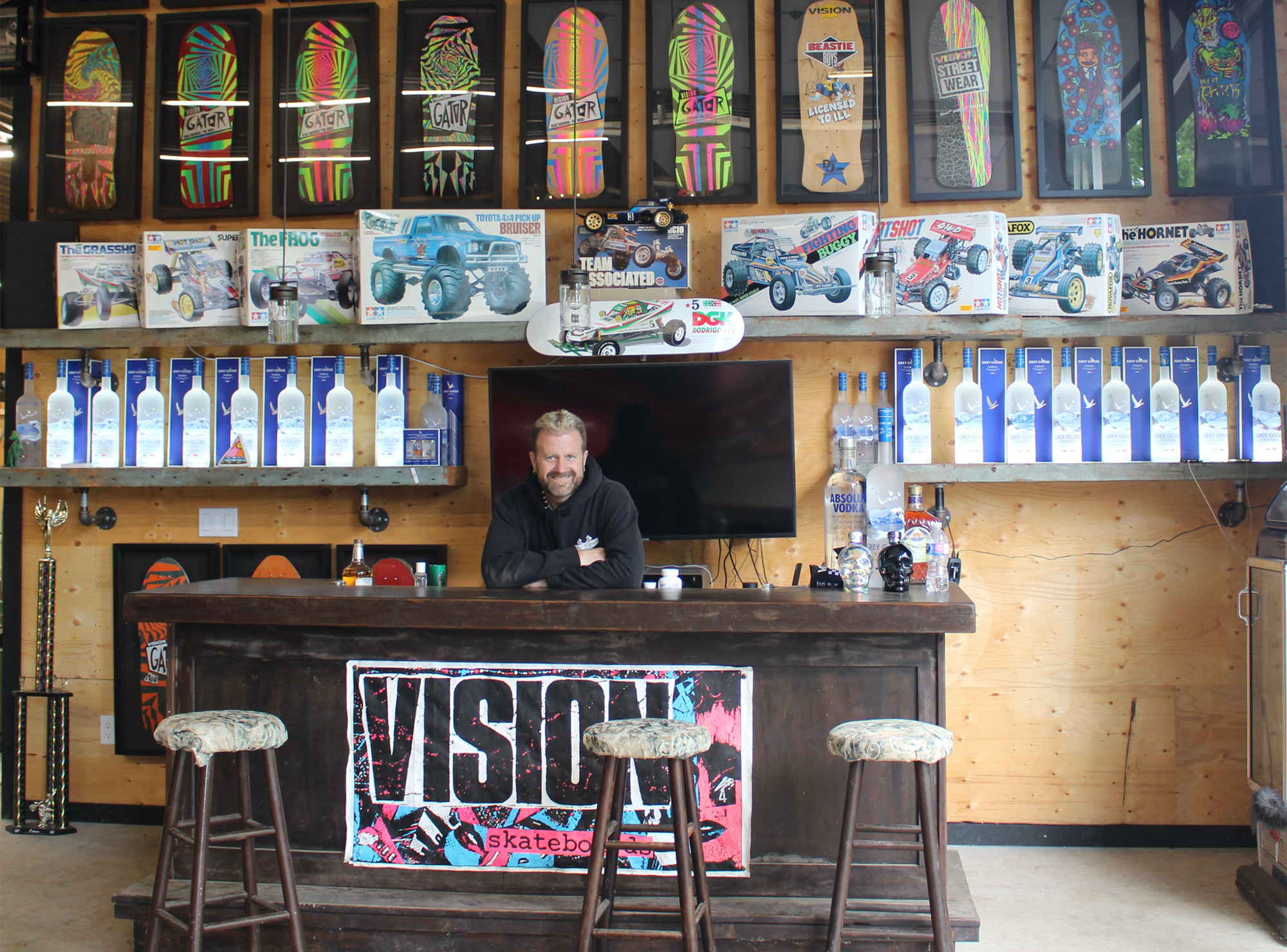 Lets start with the obvious question, how the hell did you afford all these expensive decks? What do you do for a living?
I’ve been in the automotive trade my whole life. Flipping cars 10-15 years ago was very lucrative. Especially muscle cars. The first 12 years of my career I was working as an auto mechanic for a larger autoshop. I would fix cars at night and on the weekends to make extra cash. Like every night until midnight and every weekend, Saturday and Sunday. I’ve always had this old school hard and strong work ethic that I got from my dad.

When I turned 30 I decided that it was time to put more money in my pocket so I decided to open up my own auto shop. And for the last 21 years I’ve been my own boss and I now have a six bay automotive shop with five guys working for me. There’s no question the money is good, but the headaches can be huge. And plenty of stress.

How long have you been collecting and what’s the state of your collection?
I have been collecting since 2002. I stopped after a couple of years to buy a house and start a family but I got back into the collective game around 2012. Although I do not know the exact number of decks in my collection, I would guesstimate it to be between 600 and 700 original vintage decks.

I am lucky enough that I am able to display most of my collection at any given time. Many collectors that have large collections do not have the space to display them all and as a result, their decks are set in boxes or storage. I like to see my decks every day. I think there are approximately 500 currently on display and in the next few months, I plan on having every deck on display. 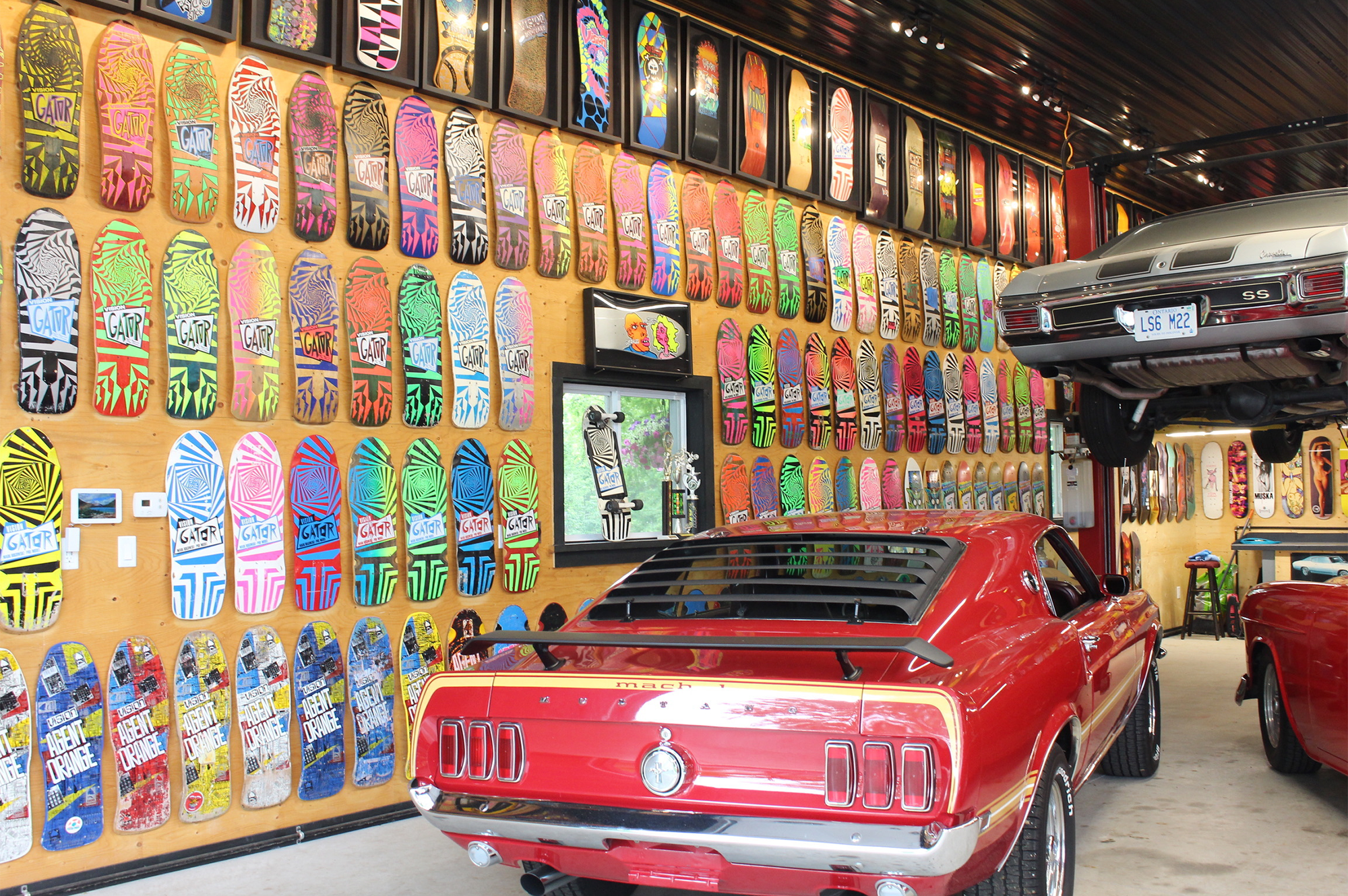 A common stereotype of adult collectors is that they’re divorced. Do you have to be divorced to have a credible deck collection?
Coincidentally, I am divorced. But, I already had a large collection prior to the split. And I’m since engaged for the past two years. Honestly, I can’t see divorce playing any part when it comes to collecting. I’m sure there are many wives who do not approve, but I’ve never had that issue.

Do you know any people who have lost their board collections in a divorce settlement?
I’ve heard stories of collections being lost in a divorce, but I have no first-hand knowledge.

What is your collection’s focus?
The focal point of my collection is Vision Skateboards, and its parent companies, like Sims, Schmitt Stix, and Town & Country. These boards and graphics were all made under one roof. However, I’m interested in any board company that was active between 1982 and 1992.

I would say that most collectors are heavily into Powell Peralta and Santa Cruz. And those manufacturers had great skaters, great boards and iconic graphics. I just prefer to collect something a little different than most. Plus, during the height of my skating around 1987 to 1990, I was skating Vision decks and Schmitt Stix decks. It only seemed natural to collect what I had remembered skating. 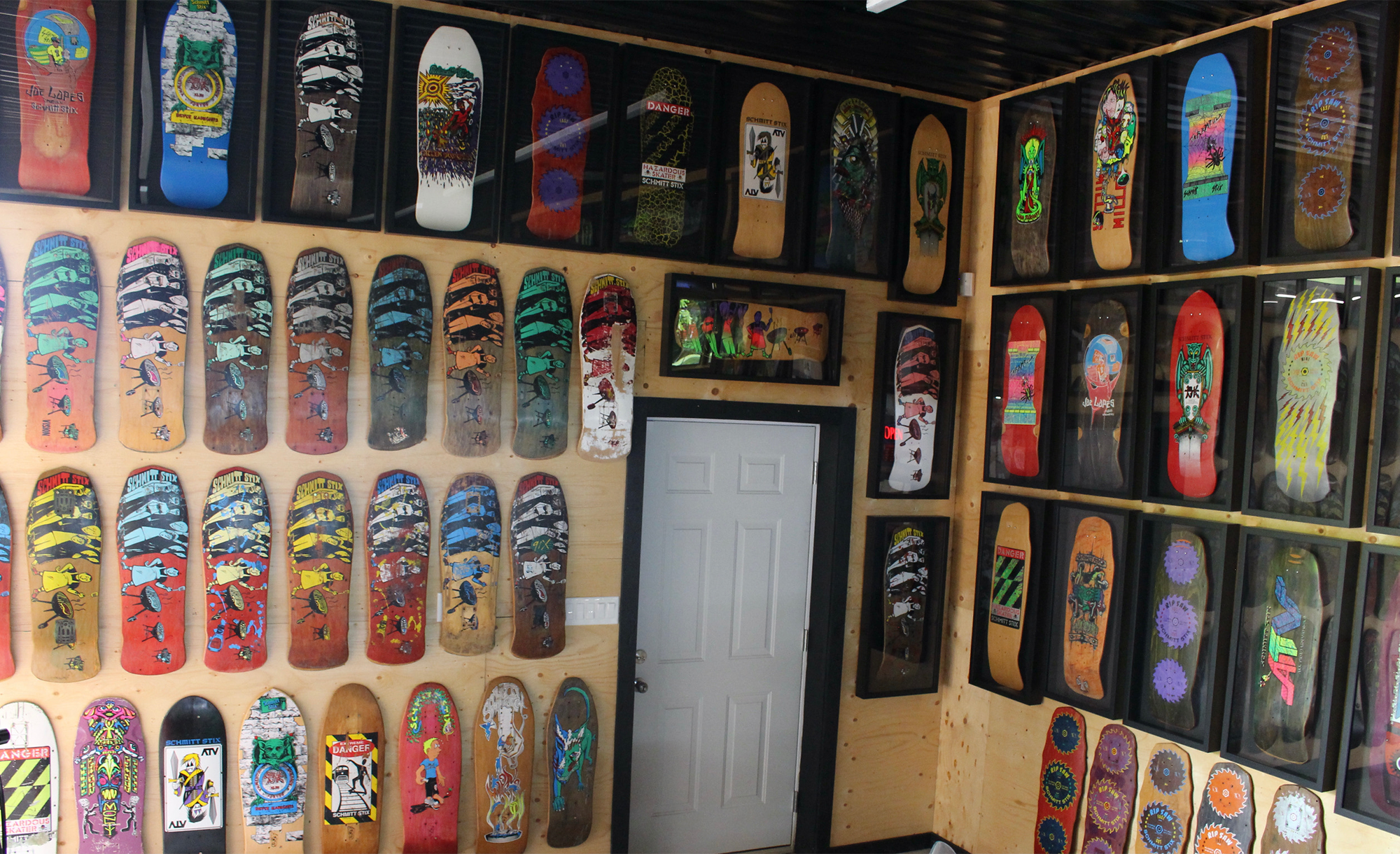 What is your prized possession?
I think my most prized skateboard would be my Tony Hawk board that’s completely intact just as Tony had it when he took first place vert at the Airwalk SkateFest in Toronto Ontario 1988. Coincidentally, I was also at that contest!

There’s a cool story that goes along with this skateboard. Several years ago it popped up on Facebook for sale. At the time I couldn’t afford the asking price, but another Canadian collector buddy of mine, Peter, bought it. I made it clear to Peter that if he were to ever sell the board, I’d like an opportunity to own it. Well not too long ago that day came and I was able to make the sale. It had always been rumored that Tony gave the board away to a young fan at the airport. However, during our negotiations, it was discovered that the board had actually been stolen from Tony while traveling from Toronto to Montreal.

When I learned this, I reached out to a friend of Tony’s and offered the skateboard back to him. He respectfully declined but offered an opportunity to fly out to his place in California and use the board to recreate some iconic pictures. That’s yet to happen, mostly because of Covid but hopefully, it’ll be in the cards soon. 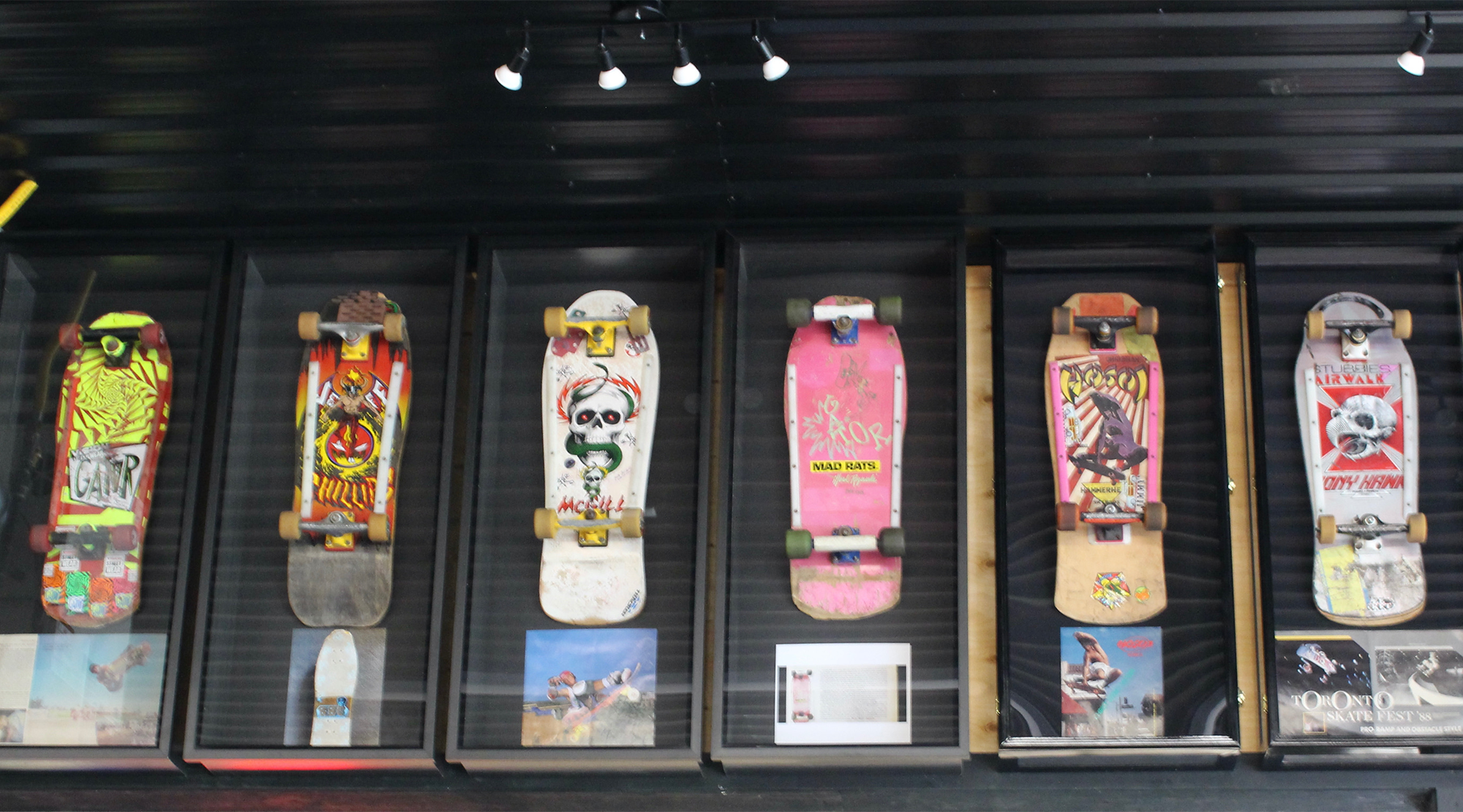 What do you think of modern skateboard graphics?
Modern graphics for the most part suck. There’s no real meaning behind the art and I feel like the graphics are not thoroughly thought through. And there’s no real skill involved with the actual application of the graphic. Most are heat transfers.

“Every dollar I save goes into skateboarding and collecting”

What are some things you could buy if you sold your entire collection?
Well, there’s no denying I have a ridiculous amount of money tied up in my collection. Exactly how much, I have no idea. But if I were to sell every deck tomorrow at market value, I could probably retire quite comfortably. But seriously, it’s not something I care to talk about or discuss. It’s not relevant, and it’s just not important to me.

I’m often accused of being a “trust fund baby” or a lottery winner or having some high-power high salary job. None of these could be further from the truth. I’ve built my collection from the ground up by working hard every day. What most people don’t realize is that I don’t have a retirement savings plan. Or a cottage. Or a beach house etc. Every dollar I save goes into skateboarding and collecting. It’s a borderline obsession or addiction, but I wouldn’t have it any other way! 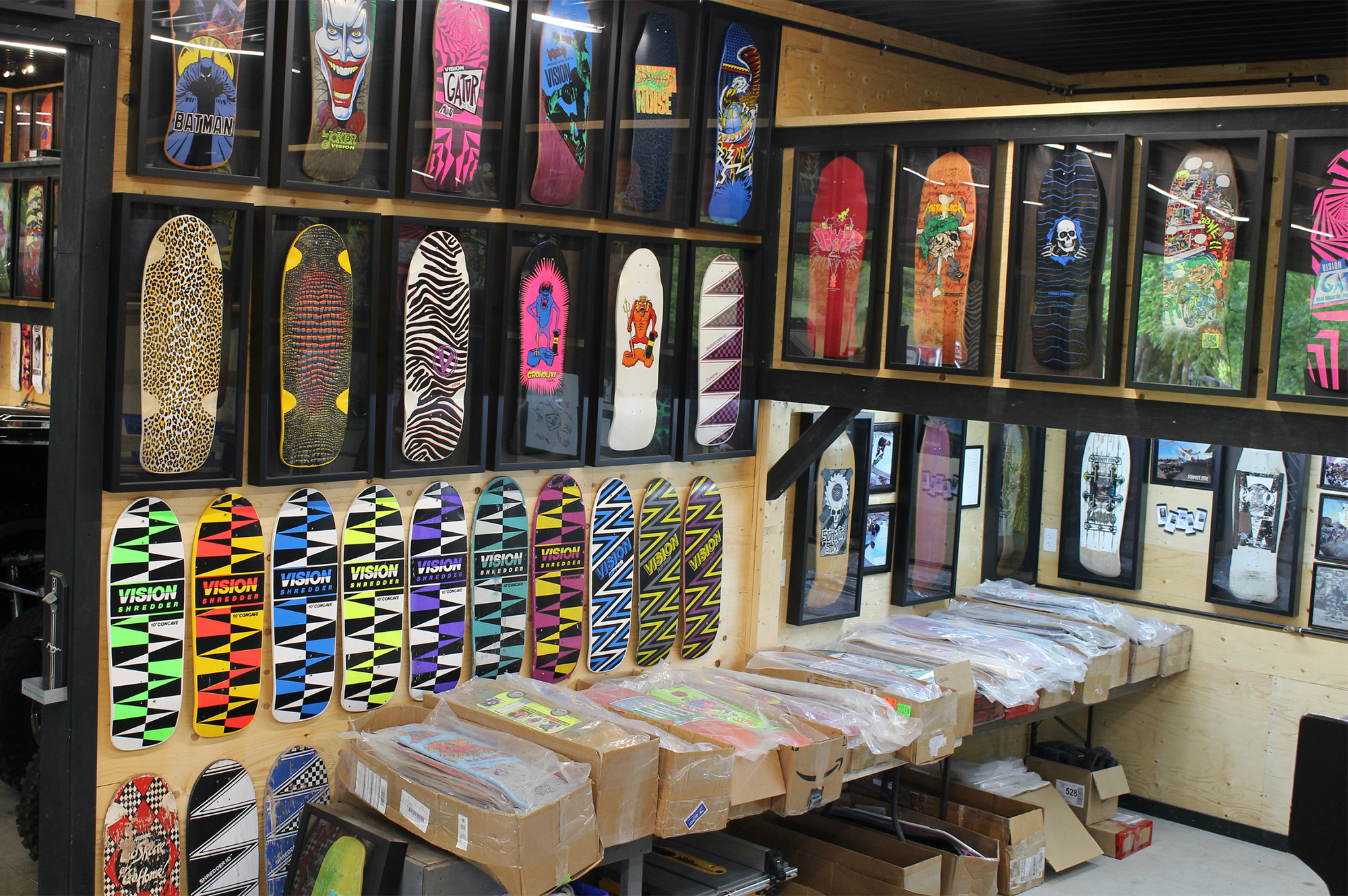 You also have a pretty insane collection of old-school cars too, how’d you get into that?
My father was an auto mechanic and owned his own shop when I was very young. He was always fixing up a car for my mom or himself at the family home. I guess it was just a natural progression for me. I loved the old hotrod paint jobs with the flames or the airbrushed murals. And the classic Cragar chrome rims. A 1970 Chevelle Super Sport was my car of choice. American muscle.

Before collecting skateboards, all my time and resources went into muscle cars and drag racing, but I loved so many different cars that I just started buying more as I saved. I’ve since sold off a few cars, basically to free up funds to buy more skateboards. At this point, skateboard collecting had become my new priority. So I kept the cars that I had a connection to or the ones I just couldn’t live without and sold off the others.

Do you have a favorite car in your collection?
Definitely my 1970 Chevelle SS 454. I’ve had several ‘70 Chevelles in all different colors but my Cortez silver with black racing stripes and the black vinyl roof is my number one favorite! 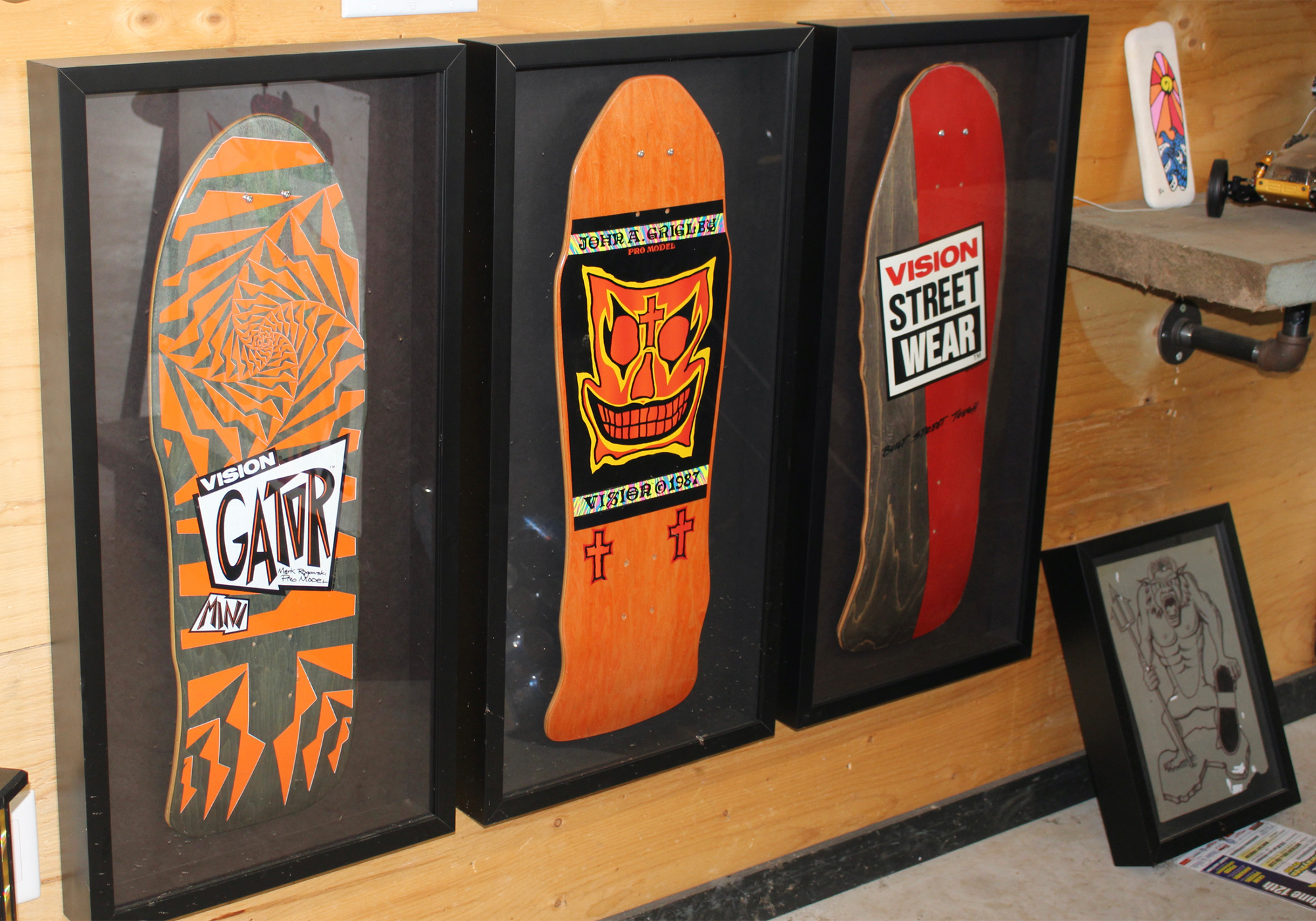 Do you have any moral hangups about having so many Gator boards?
I have zero moral hangups. I am able to separate the board and the graphic, from the man himself and his horrendous actions. In no way do I idolize Gator as a person, nor do I condemn his actions. The fact remains, that the murder of Jessica Bergsten had absolutely nothing to do with skateboarding or skateboards in the ’80s. My focus on Gator’s involvement in skating was in the ’80s decade.

Let’s be honest, Gators’ 1984 spiral graphic is legendary and iconic. Thousands upon thousands of that graphic and pro model were sold, and that continued on until 1988. To this day, that spiral graphic is very collectible, highly sought after, and commands above-average prices. The fact that there are so many colorways and variations, just makes it all that much more cool and collectible.

Do you ever worry about rare decks being re-issued or fakes?
I wouldn’t say that I worry about rare decks being re-issued. Let the manufacturers reissue whatever the hell they want. Original will always be original. And a re-issue will always be a piece of shit. Re-issues should be used for skating. Originals should be used for the preservation of skateboarding history, in my opinion. I don’t think that the re-issues affect the value of an original deck, nor do I care.

Fakes, on the other hand, can be a different story. Some are made so well that they are becoming increasingly difficult to identify as fake.

Do you have any tips for new collectors?
Make friends, and make contacts. I would say 80% of my deck deals are done behind the scenes with guys I have done business with before. I’ve always been known for a smooth and easy transaction with no bullshit.

Also, ask questions. Educate yourselves. It’s so easy to get burned. It’s gotten very expensive, so if this is something you are interested in, disposable income is a necessity. 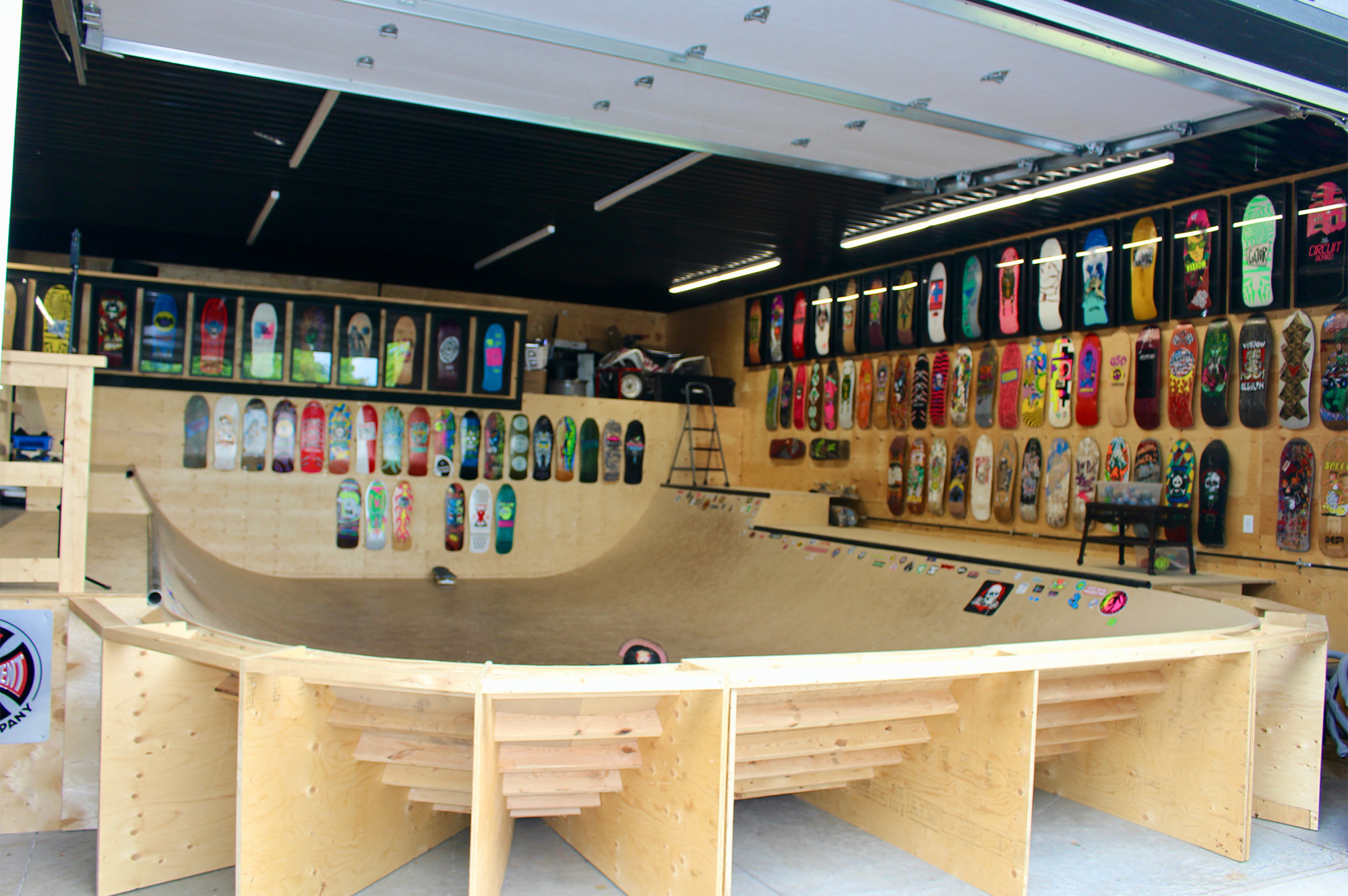 Do you think if you started selling your decks you could move the market? Like change the price of what certain boards are worth?
If I were to sell my entire Gator spiral collection of 100+ boards for well below current value, I think it’s possible that it may impact the market and bring prices down in general.

But I don’t want to come across as this power-tripping big important collector. Because that’s definitely not me. I’m just a dude who loves skateboards more than most people. And if other people only knew how much time I’ve put in to helping others with their collection or answering questions or this or that, they might see that I’m just a good guy who cares about others and just loves the ’80s.