WATCH “SLEPT ON PSYXXXO” A PLAYFUL VIDEO FROM THE MOHKIE CREW

Getting sober as an aging pro skater has become pretty common, and it’s respectable when you factor in that the skater has probably been drinking hard alcohol and beers in the back of a van for 10 plus years. Something you don’t hear much about, though, is young skaters ditching the beers and weed for a lifestyle of sobriety.

And although it’s uncommon, it’s not impossible. Just look at Shack and Amin Sharif. Neither of them is 25, yet both have had life-altering experiences with substances that have pushed them to learn how to navigate the skate world sober. Shack, 24, is the founder, filmer, and editor of the Mohkie videos, and Amin Sharif, 20, is a new addition and key component to the crew, which is why we’re happy to premiere Amin’s part from Slept On PsyxXxo +MIXTAPE+, the latest Mohkie full length.

We hit the duo up to learn more about the duo beyond their sobriety. If you’re interested in watching the full Slept On PsyxXxo +MIXTAPE+ video, keep an eye out for a premiere in your city or country as Shack plans to take this one worldwide.

Congratulations on the video and the part. I think the thing that stood out to me most was the song choice. Where did that come from?
Shack: The part and the video have such a weird fucking blend of different music. I guess that’s just how we are [laughs]. But Amin listens to that shit! He’s the one who showed me the Colbie Caillat song.

I love Fergie, Gwen Stefani, Avril Lavigne, Taylor Swift, and Katy Perry. Their songs are huge hits on the radio for a reason. They’re just too good.

Do you keep the windows rolled up, or are you bumping that shit loud?
A: I bump it so loud with the window up, nobody is hearing that. But when I pull up to school or the skatepark I turn that shit way down [laughs].

You’re punching your board in the opening clip, are you a punch a hole in the wall type of guy?
A: [laughs] No, I used to be when I was getting high, to be honest. But what recovery has done for me is that I tend to handle things maturely and not freak out. Every once in a while, by myself, I will kind of explode, but I’m not the type of Mason Silva gnarly angry skater [laughs]. Usually, if I get 45 minutes in and I can’t land it, I’m not the type to break a board or yell, I just get sad.

The night of that clip, it was pitch black, there was a gnarly fisheye light in my face, and I was missing the ledge every time. There is something about punching my grip tape that calms me down. I have scars from hitting my grip. At that moment it was what had to be done. I never even got a clip there. We went there like 15 times [laughs].

You can tell I’m not built for throwing punches or freaking out. Some dudes look super gnarly in rough cuts, and they look good breaking their board. Me, I’m just like, punching it from six inches away [laughs]. 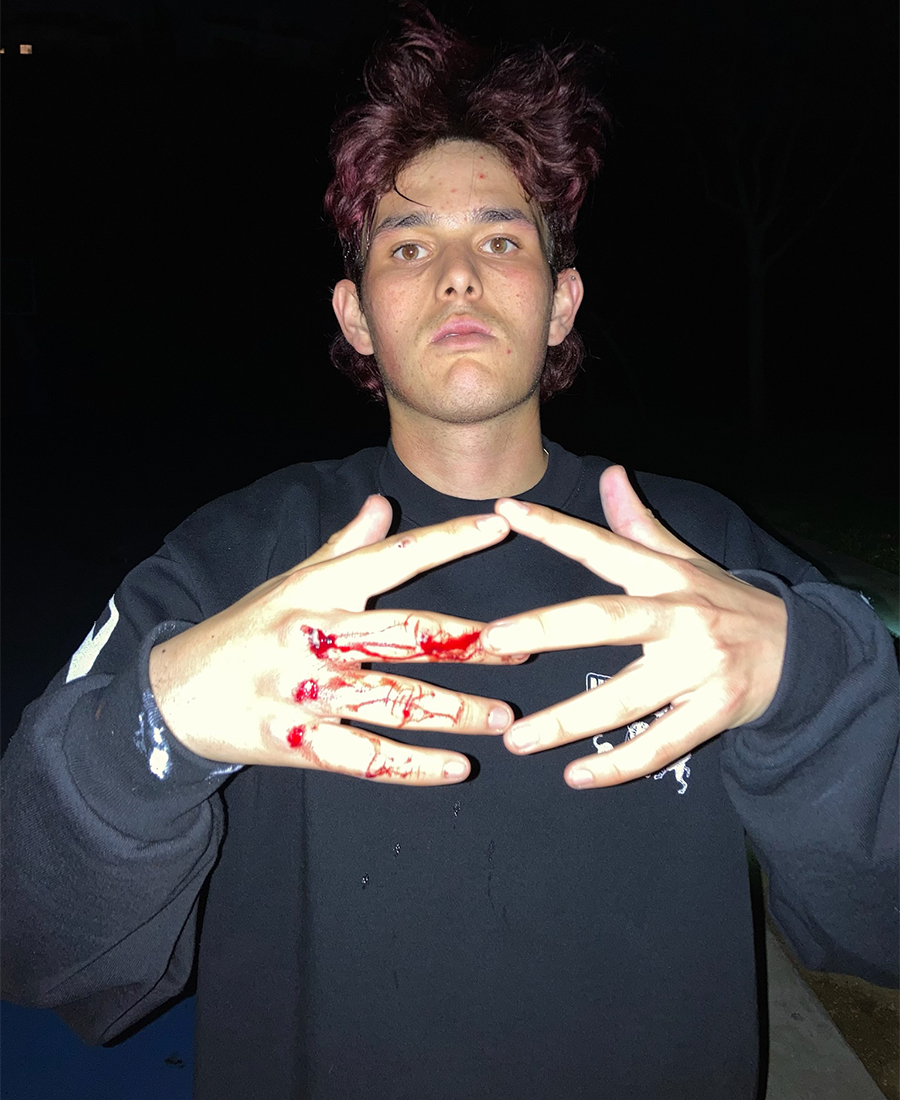 So you are both sober, right? Is that how you met?
A: I met Isaac [Shack] at recovery. I was introduced to him by some other people in recovery, and I thought nothing of it. I had no clue who Shack was. But then he gave me his old vape, so I instantly liked him [laughs].

S: That was the last vape I ever had [laughs]. What happened was we had skated, then I had COVID and when I got better I was like, “I have to film this fucking kid.” Like he’s so capable but he doesn’t know what he’s capable of yet because he hasn’t even grown into his body. So, I hit him up like “You wanna film?” and Amin said, “When?” I was like, “Always.”

You don’t see a lot of people your ages get sober.
A: I got sober an ultimatum from my parents that I was going to go to treatment or be homeless. My using habits put me in a place where I was either gonna die, go to prison, or get sober. I’m not the hardest dude, so I figured I’d go to treatment for a month or two as a tolerance break. Then in November 2019 I went to treatment and wasn’t allowed to have contact with the outside world for like a month.

I got sober on November 8th, 2019 when I was 18. I grew up skating at Stoner Plaza and that’s where I spent most of my childhood. There were always these older dudes there who were always skating and who were kind of beast. Then, I found out about this meeting they went to that was actually at Stoner at 9:30 am on Sunday and it’s all skaters. I went before I got sober, like trying to get sober, and I met all of these dudes. A couple of them have parts in Shack’s video.

S: Yeah, I’m 24 and Amin is 20, but we both got sober when we were 18. That was a big reason I wanted to be around Amin. I saw that there was this Middle Eastern kid who got sober when he was 18 and I was just thinking, “He’s totally fucked and he doesn’t even know it.” The funny thing is that when I need help Amin is there. He’s saved my life, like, actually saved my life. 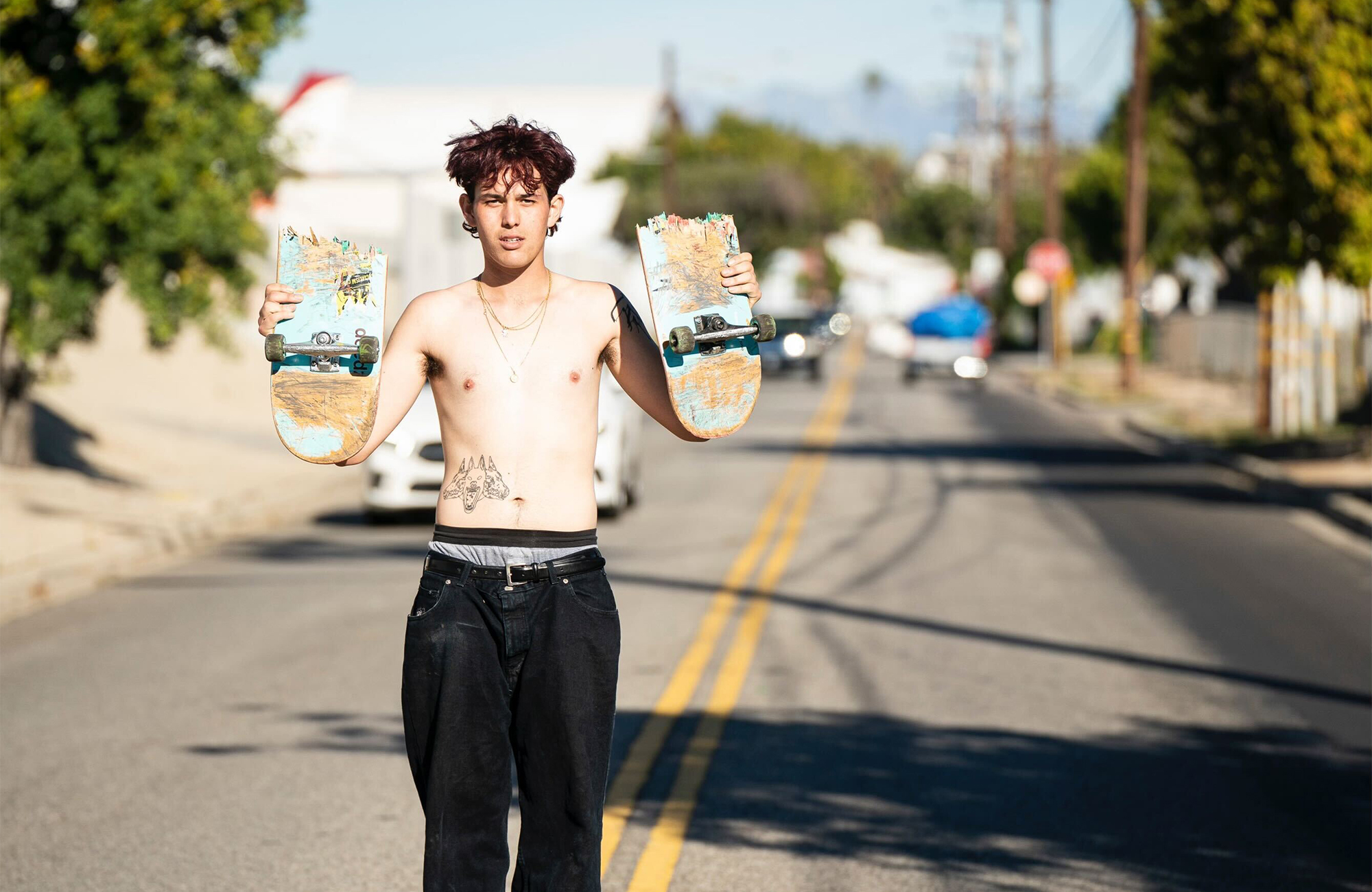 Skating sometimes seems like it praises drug and alcohol use. Do you think it’s a problem if videos glorify that?
S: The world of skating has changed a lot. The Olympics made skating mainstream and that made it possible to skate without parents thinking their kids are going to be fucked. My mom used to hide my skateboard. She made me do water polo, golf, horseback riding, basketball, and soccer. My mom thought I was going to end up in drugs and gangs if I skated, but the funny thing is the worst shit I ever did was not with skaters.

We’ve all seen Baker 3, you know? If you look at my videos there is drinking and smoking, and I’m the one fucking filming it [laughs]. I’m not saying stay away from drugs, I just want people to know what they do to you. If drugs take you somewhere where you don’t want to go, don’t fucking do it. Beware of all the evil in this world. Don’t just look to positive shit. If there is a negative thing right in front of you check it out. Don’t just run away. Face your shit. With skate videos, it’s just documentation. It’s facing what is right there in front of us when we’re skating.

Shack, I heard that you have a few medical conditions, can you talk about that a little bit?
S: Yeah, so I have some genetic diseases. I have this soft tissue disease. I spend like six hours a day in the bathtub. The reason the video took so long to finished with the video is that I cannot physically sit at my computer. I even have a handicapped parking pass. I’m fucked. I have chronic tendonitis. I broke. my hip when I was 12. I also am finding out no that I have celiac disease. I had some melanoma cut out of my arm. I have like four different movement specialists that I see twice a year, and they’re like Parkinson’s doctors A neurologist actually told me to give up on my life like a year ago. He was like, “Dude you fucked your brain up, you fucked your body up, just give up.” And I’m like a 23-year-old addict in recovery, five years sober, Adrian Monk level OCD. Like what the fuck?

Every time I’m filming with like Amin or someone, I have visions of people shooting me because when I was 17 someone held me, hostage, at gunpoint for an hour. It was one of my best friends. He had a gun to my head, totally senseless, and he just gave me his PTSD. So the past few months I’ve been locked in my room by myself just reliving the most traumatic moments of my life, like fucking Scrooge. That’s what’s been happening for the last few months so the fact that I’m on this call with you is a miracle.

Amin, you do a lot of ledge combos, like the front noseslide front crook. Are there any illegal ledge combos?
A: Sure! I think there are some ugly combos. A lot of 50-50 combos are disgusting. 50-50 to lipslide or front board or whatever. I think a 5-0 to switch crook needs a time and a place to look right too [laughs]. I have to work with the tricks I have so something that is what I have for that spot. There are definitely some combos that I’ve done that I’ve been like, “Why the hell did I do that?”

Aside from the Mohkie gear, you were wearing a lot of gear from Stunt, Melodi, and Red Rum. What do you think those brands offer to skateboarding that other brands overlook?
A: I think they break the traditional side of skateboarding. Even in Skate 2 career mode, you can’t have more than one clothing sponsor. If you skated for Altamont in 2008 you had to wear all Altamont stuff, but I get to wear all of my friend’s clothing in one clip. It’s not like they’re my sponsors. They just get to make clothes and they have a cool platform that isn’t all about skateboarding.

S: With brands like Mohkie or Stunt, I refer to them as the Dirty South. Like Three 6 Mafia, Master P, No Limit Soldiers. I think about DJ Screw, Juvenile, and Cash Money. Nobody gave a fuck about them because everybody was caught up with the East Coast vs. West Coast thing and nobody cared about the South. But the South had the dirtiest sound and they have something special there.

I think for a brand that is doing their own shit, it’s essentially a response to of the skate industry saying, “You’re lucky to be here, you’re lucky that we serve you a plate of dogshit and pay you $20 because we’re broke too.” Then you have to thank them and if you don’t then you’re an ungrateful prick. You’re filming and doing thousands of dollars worth of work when you’re producing, directing, editing, filming, doing VFX for dog shit pay, and if you bring it up you’re ungrateful to be working for the “coolest” brand. What is this, Mean Girls?