OUR OLDEST AND YOUNGEST STAFF MEMBERS SHARE THEIR 2022 PREDICTIONS 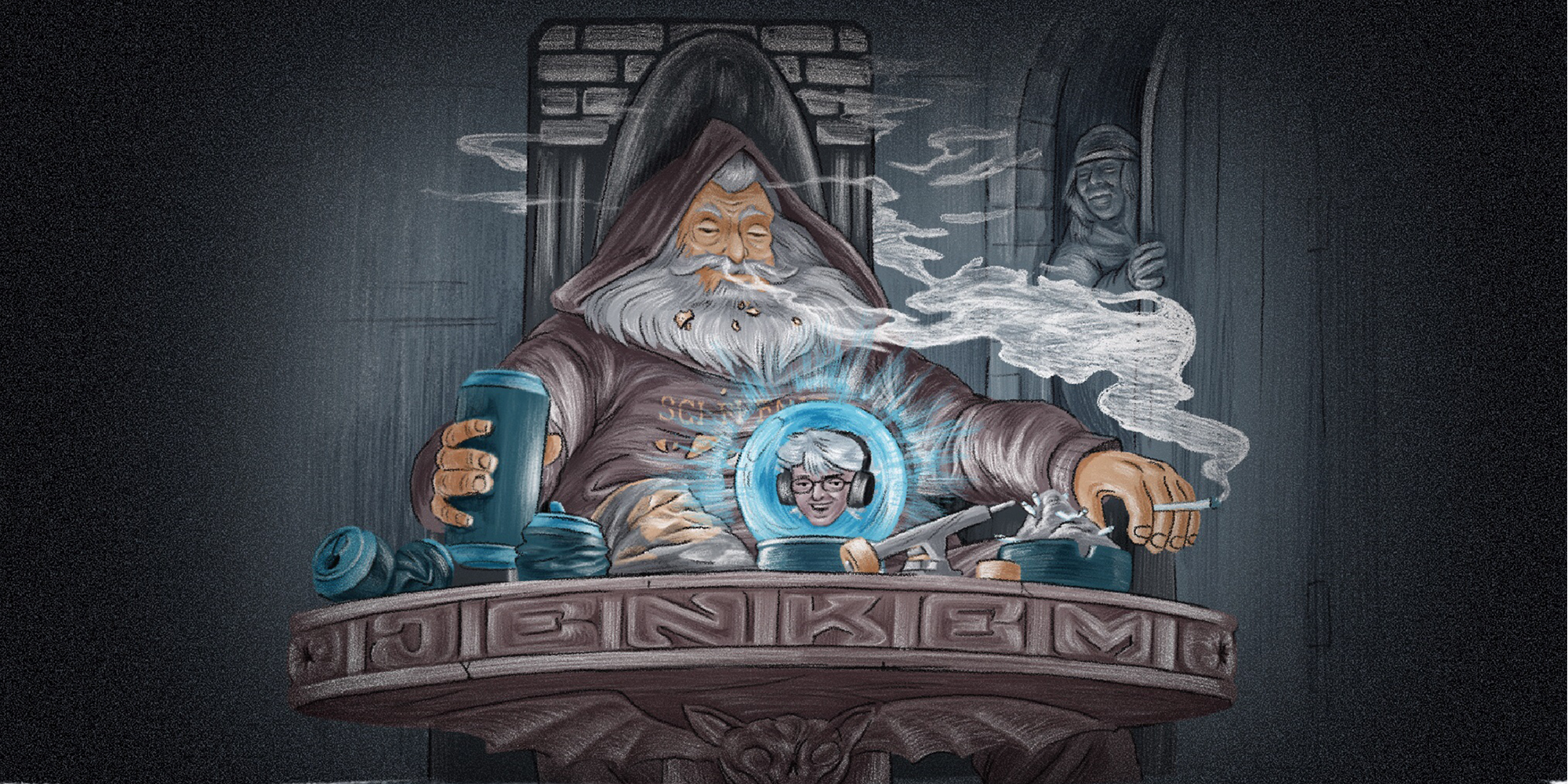 We hope you’ve had a good start to your year, and now that your thoughts are semi-lucid again, and you’re back at your miserable job, we decided there’s no better time to share our predictions for 2022 with you.

It’d be too easy to just scroll Instagram and SLAP and see what’s getting buzz, so instead we had the oldest and youngest members of our team, Thomas Barker and Justin the Intern respectively, pull thoughts out of their ass with no evidence to support their claims. Just kidding, Thomas has been working in skating longer than Justin’s been alive, and Justin has been fed more skate industry insight during his tenure than your local shop homie has gotten in his entire life.

But all jokes aside, given their age gap, they do pay attention to very different aspects of skating, so hopefully, they covered everything that you’d care about whether you’re a grom or a grumpy hesh lord. And as usual, if we forgot something you think is vital, just leave it in the comments so we can ignore it for next time. 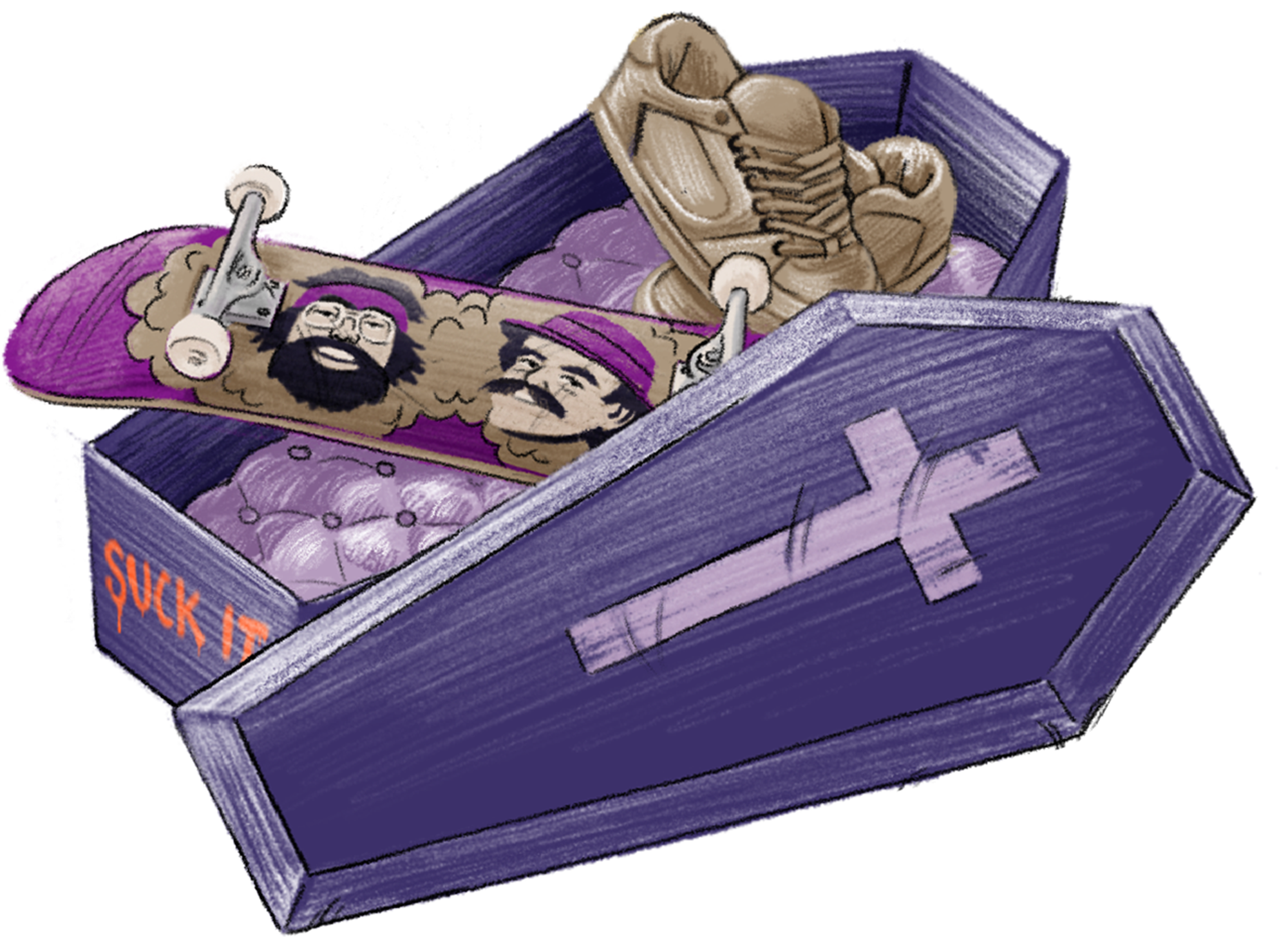 Mark my words, this will be the year of the gross trick. Try explaining how gross a late flip lipslide on a skatepark rail is to a 12-year-old kid that just got his first contest win along with a fat contract from the gross shoe brand.

In the rat race for glory and to attain Rayssa Leal’s 7 million Instagram followers, skaters will do whatever it takes to stand out including triple flips onto rails, grab in / flip out combos, THPS style manuals between tricks and abominations that this late millennial only thinks about in my nightmares.– Thomas

Skaters will once again be broke

Skaters seldom realize when a trend has gone sour. That’s true with camo pants and yerba mate. With the pandemic coming to a close (not really) it seems that stimulus checks are a thing of the past so most skaters can expect to go back to their humble lives surviving off a few bucks they got from flipping dropoff decks.

Also, more photo labs are shutting down, so the cost of developing 35mm photos is rising, and supply chain issues are increasing the cost of film from China. It’s safe to say most people will no longer be able to afford their monthly film photo dumps on Instagram. What a shame. – Justin

Y’all did this to yourselves. A few nostalgia Instagrams were cool, seeing forgotten ’90s skaters do tricks that were overlooked had its place, but you all went way too overboard.

Some skateboarding was supposed to be forgotten. It’s hard to scroll Instagram now without some bitter 40+ year old trying to bring back Dave Coyne clips and saying he shoulda got SOTY in 1999. No, he shouldn’t have. – Thomas 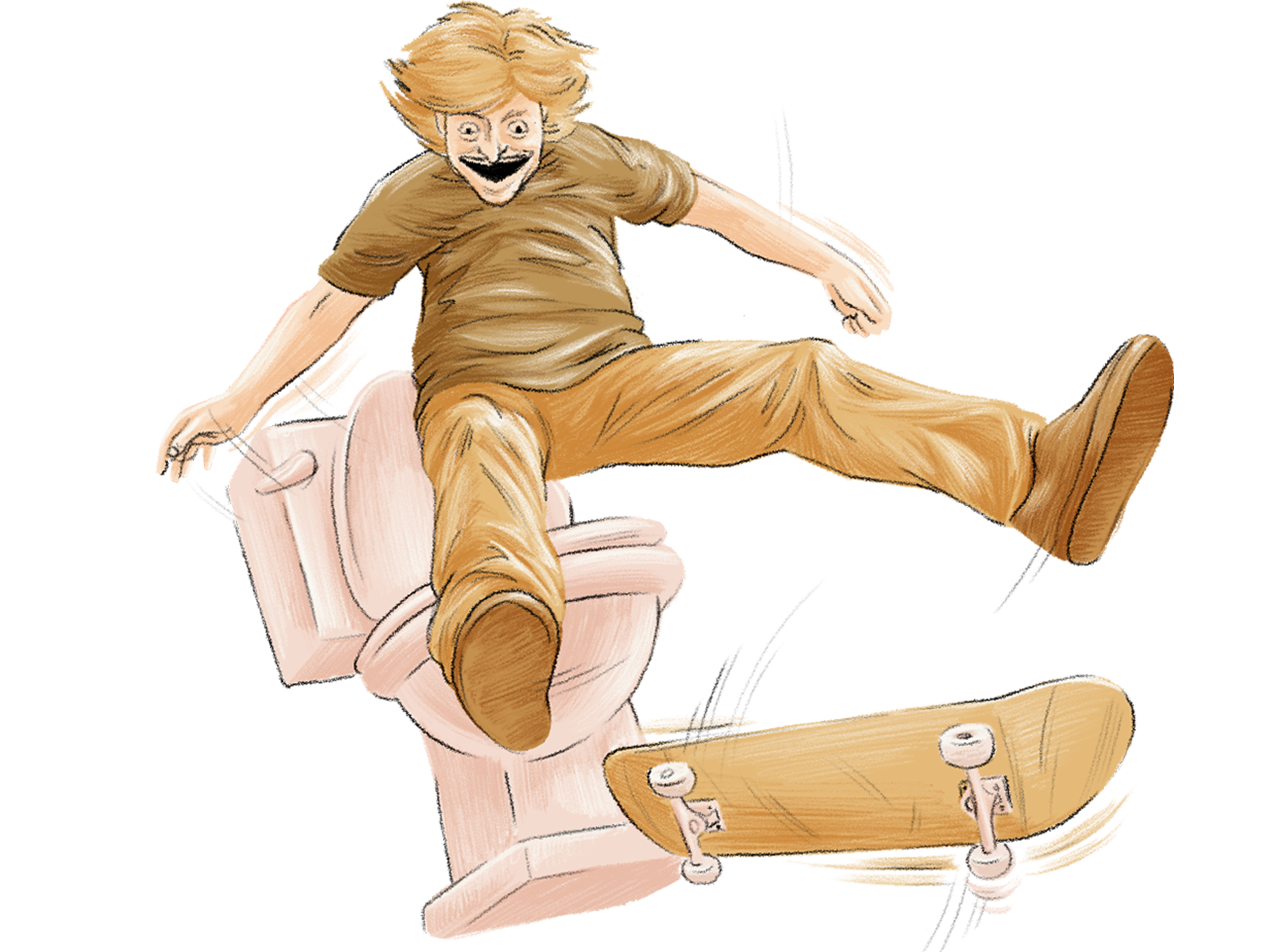 There will be a stolen skate meme that leads to real-world violence. It will probably be some clever “Torey Pudwill looks like a baked Grizzly bear” meme or some shit like that. Two people will see the same photo on NatGeo and post it at the same time and it will be the meme equivalence of the assassination of Franz Ferdinand. Once the war starts there is no going back. Choose a side or hide for your life because these meme creators are dead serious.– Thomas

The NY Bubble will Pop

This might be a bit controversial and I don’t think I’m qualified to speak on this, but I think New York City’s popularity bubble will pop. Skaters have been moving to New York from all across the country and world and they’ve been pumping out more footage than I can keep track of. Almost every Blue Park local has released a part in the past two years.

But rent prices have been increasing like crazy again and the overall cost of living is going berzerk. Other cities across the US and the globe are popping off and offer great spots, good culture, affordable prices, and the opportunity to grow your name in skateboarding. Some of my friends have been looking at going to college in Canada or even Europe as a way to be a bigger fish in a smaller pond and achieve the dream of affording to live off of skateboarding.

I could see Philadelphia taking the place of New York as the East Coast capital of skateboarding in the next few years thanks to Muni, Nocturnal, and skaters like Kris Brown and Jahmir Brown. Also, Montreal could come through and steal the spot with the help of Dime, universal healthcare, and a thorough history of skateboarding.– Justin 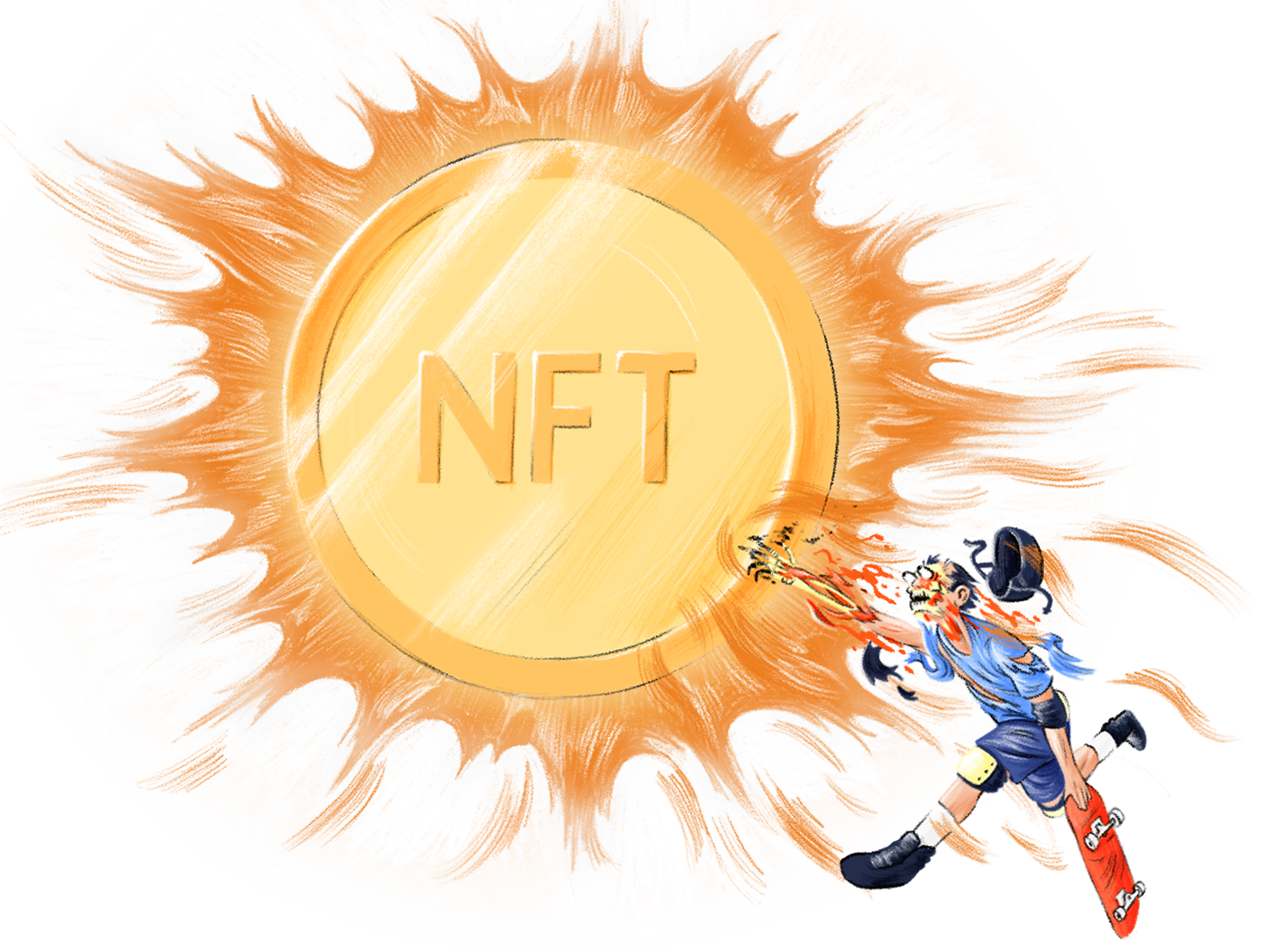 Maybe it will be an NFT or maybe it will be a shitcoin™ or some new swindle that hasn’t even been thought of yet, but some unlucky professional skateboarder is going to be caught up in a web 3.0 fraud scandal this year. We’ve all seen a select few pros pushing this already and thought to ourselves, “This can’t be legal, right?” Well, the chickens are gonna come home to roost on this one. My guess is that it will be a vert pro flying too close to the sun.– Thomas

The Olympics created an entire class of newly self-important people in almost every country in the world. These federation directors, agents, coaches, managers, and assistants now have a long gap before skateboarding remembers the Olympics again, so these people will need to shake things up and “save skateboarding” in order to justify their new position of power. Look out for rules, regulations, politics and other bullshit to bring “fairness” to (competitive) skateboarding, as long as it doesn’t mess with the Olympic money bag.– Thomas

With the Olympics and the increase in corporate skate companies, a lot of people have been talking about the possibility of core skateboarding dying, but I don’t see that happening because core skateboarding seems to be alive and well. In the past year, we’ve seen incredible videos from big brands like Palace, Quasi, and newcomer Limosine as well as homie videos like Respectfully, Tasteful, and the iPod Video. We’ve even elected Gifted Hater as our official representative to the UN.

But on the other hand, parents have begun breeding their kids to become Olympic skaters from day one. Skateboarding camps, after school activities, and trainers have become fairly popular for kids under the age of 12. At many of the cities parks, it seems like the comradery, reckless abandon, and teenage angst that used to define skateboarding is gone. I fear that kids today are growing up seeing Jagger Eaton and Aaron Kyro as legitamite pros and it’s hard to see the similarities between these two sides of skateboarding.

These two cultures simply can not coexist. But neither seems to be going anywhere and they’re only getting stronger by the day. So, they will just grow apart and there will be those that ride a skateboard and those that skate.– Justin