We’ve all seen a lot of skating in China throughout the years, but rarely do we see people from China doing the actual skating.

This time around, we’re flipping the script and are excited to share an edit featuring a crew of skaters from Shanghai on their trip to Chongqing, one of the largest cities in the world.

To put into perspective how big Chongqing is, the city is roughly the size of the entire country of Austria, with about three times the population.

Skating in China is still relatively new, but with it’s immense size, there’s no doubt we’re at the very beginnings of a massive shift. This is just the first of many bits of footage to make its way into our inboxes from this budding scene, and we’ll be watching as more crews and brands start to pop up and make waves globally.

We talked to Will Cui and Joe Zhou, who pieced together this homie edit and an accompanying zine to get their insights on what they see in the future for skateboarding in China. 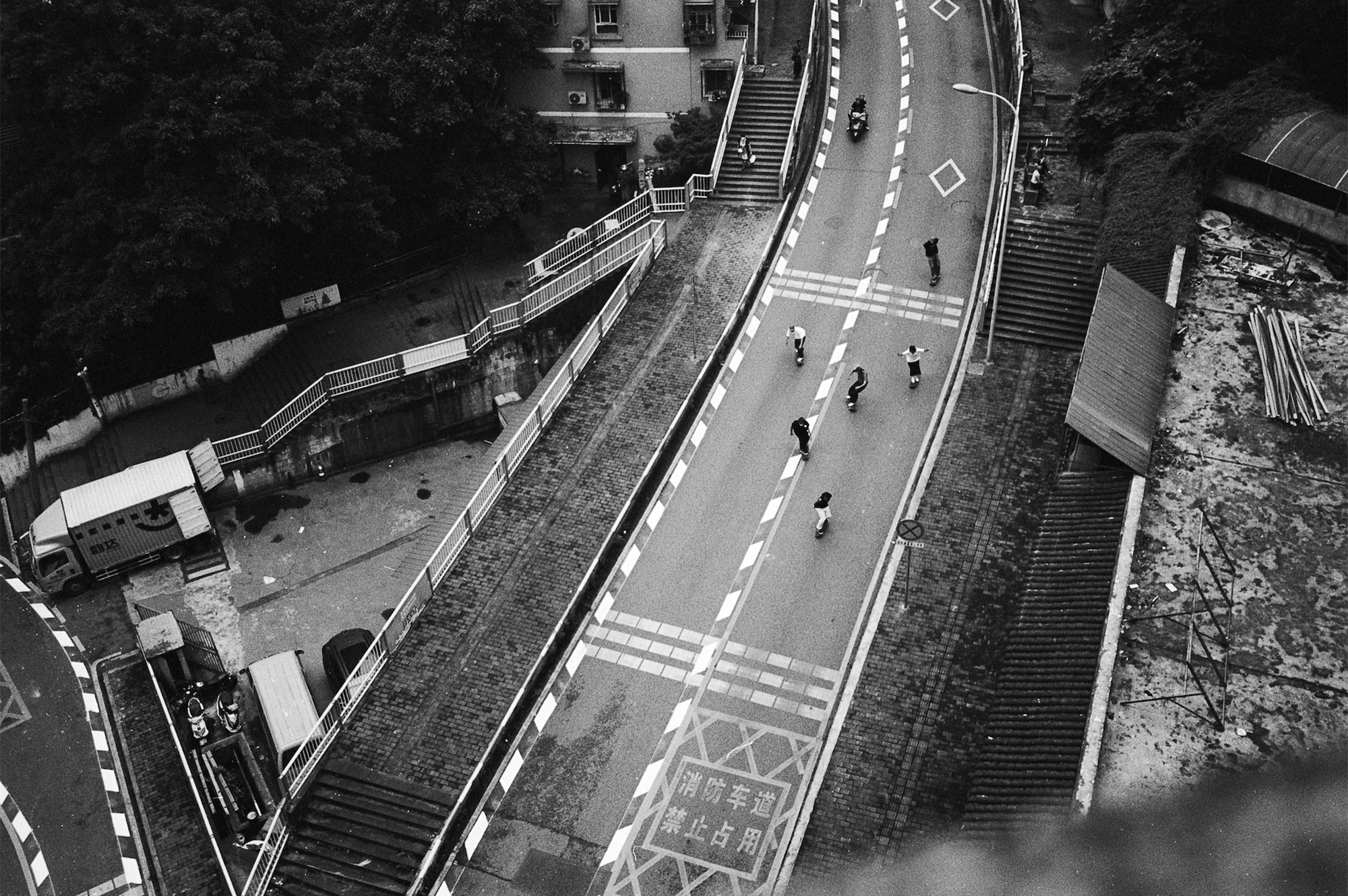 Up until recently, most skaters in the West only knew about the spots in China and not really the actual skaters. What can you tell us about the Chinese skate scene?
W: The skate scene here will blow your mind! There are skaters skating around. They work, they skate, and skateboarding is their lifestyle and outlet. They keep it real. Still, a few skate brands and skate crews are making videos.

There are these skate schools in every city popping up because of the Olympics. They marketed skateboarding as a sport that has a positive impact on kids’ life, so parents would pay top dollars to have their kids learn. Most skate shops here now rely on skate lessons to survive. If the Olympics ever ditch skateboarding, I’m sure most of these skate training facilities will have a hard time keeping their lights on.

Another shitty situation is we have government-funded skate teams in cities and provinces. They pick skaters and train them to win meals. Skaters in these teams would have to get up at a set time, do physical training, and skate in government training facilities every day. They would have to stay in dormitories and eat at canteens. It’s like a military training camp. Skaters would join these teams only for the salaries. I don’t see any fun in it.

I have nothing against the skaters in the Olympics, as they are one of us. But fuck the Olympics! Skateboarding is not a sport! Until someone figures out a point system to grade paintings, sculptures, and music, I don’t see how you can judge people’s skating. 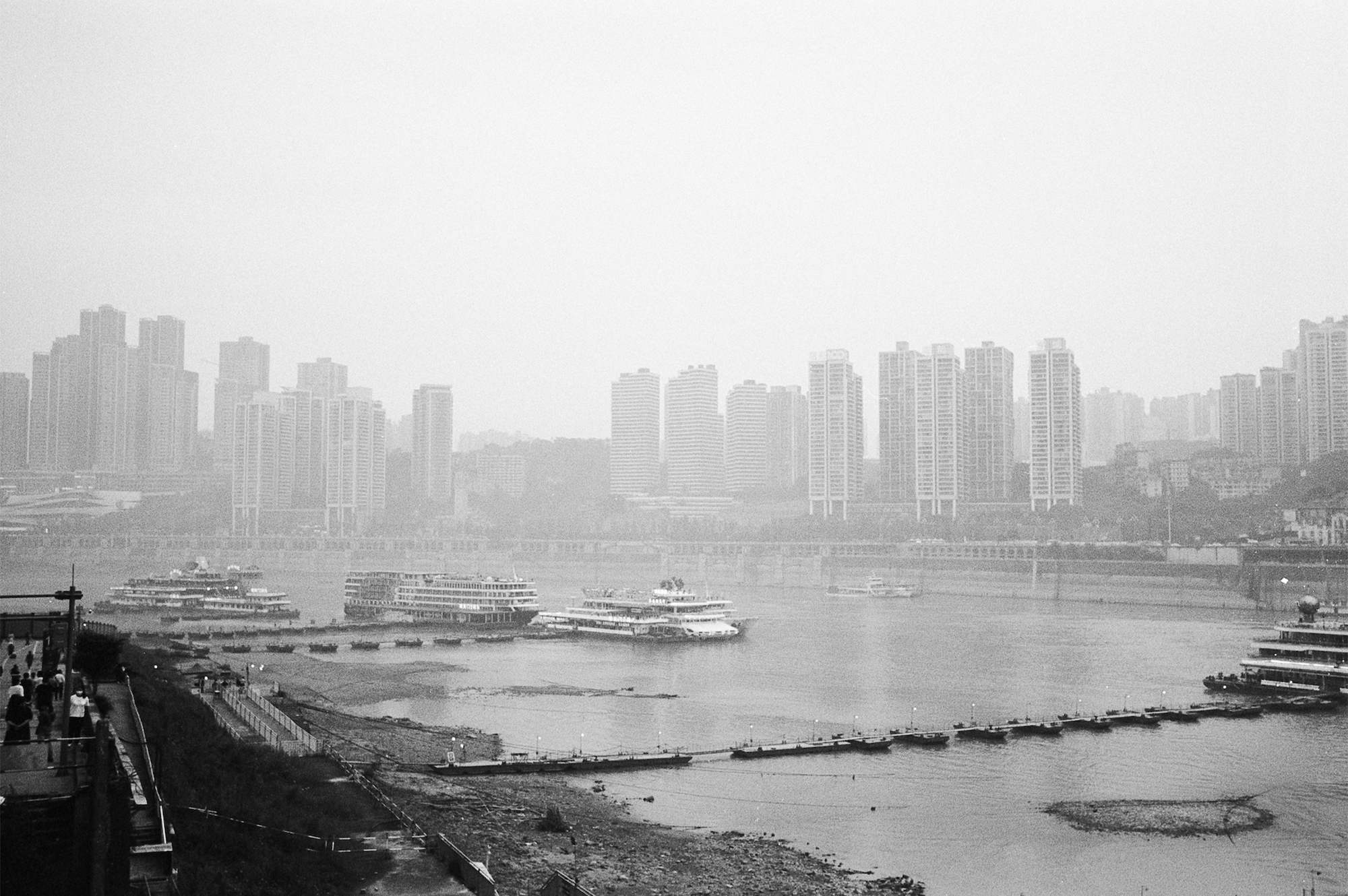 Since the skate scene is so young in China, do you guys feel like you need to take cues from other established skate scenes?
W: We definitely need to take cues from well-established skate scenes, but we also have a different cultural background compared to the West. I would love to see our skate culture grow organically. With the Olympics shadowing skateboarding, I just hope the young generation will always remember we are the outcasts, the misfits. We don’t need all that mainstream bullshit.

China is always building new cities and new architecture so how does that play into the scene in Chongqing?
W: Well, we picked Chongqing because of the hills and the raw, rough city vibes. All the industrialization and urbanization make most of the Chinese cities look alike. The usual marble spots or grand high rises ain’t attractive to us, and we want to go skate in a city that has different kinda vibes. We stayed in the old town, where all the rougher spots were mixed with new and old architecture. We are sick of showing people all these perfect marble spots, so we want to show people there are raw, unique aesthetics in Chinese cities too.

What has it been like seeing the mass industrialization within China first hand?
W: It’s nuts living through it. The industrialization in all the major cities would slowly go out from the city cores and take a few years to transform the suburbs. Farmlands became factories and warehouses. Now all the major Chinese cities are massive. People have to drive far to see some real nature. 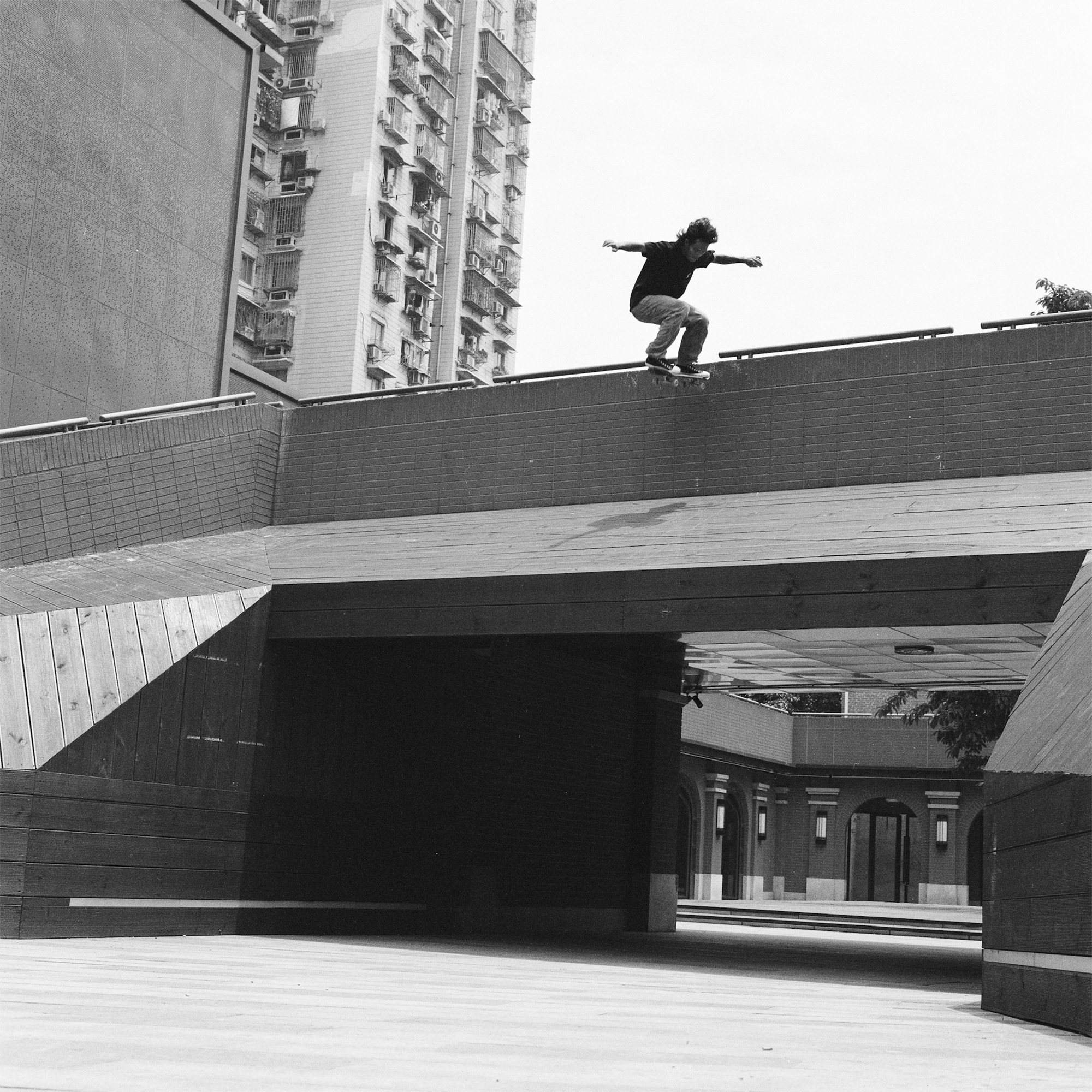 In your video, what are those five buildings in the background of the shot with the red chair? Where did you guys get a bull from for the last shot?
W: Those five buildings are new residential buildings in a Chongqing suburb. I don’t think many people have moved in yet. Joe Zhou followed this Instagram account with some surreal landscape images, one of which was this location. Joe is always on some artistic tip.

This field is actually a preparation site for building high rises. They piled mud onto the site and let them sit for a long period of time, to get the foundation ready. During this preparation period, wild grass has grown, and people have herded their cattle there. We went there for this shot, and the bulls were just there, eating the grass and enjoying the day. They are some majestic animals. Shout out to all creatures on this planet!

Why do you film with a VX-1000 and not an HD camera? Is it as hard for you to find tapes and parts for the VX as it is for us in the US?
W: Joe and I will always be VX heads. As Jamie Thomas said, “It’s in the blood, and it’s a statement.” We could still find tapes easily here on Taobao [biggest online shopping platform in China], but finding a good working VX is near impossible. VX parts are difficult to locate too. We are always on the hunt for spare parts.

Where did the song in this video come from?
J: Years ago, I went to a religious performance in Beijing and remembered this mysterious song full of drum beats. When we were exploring Chongqing, this song came to mind, and it fits our footy. 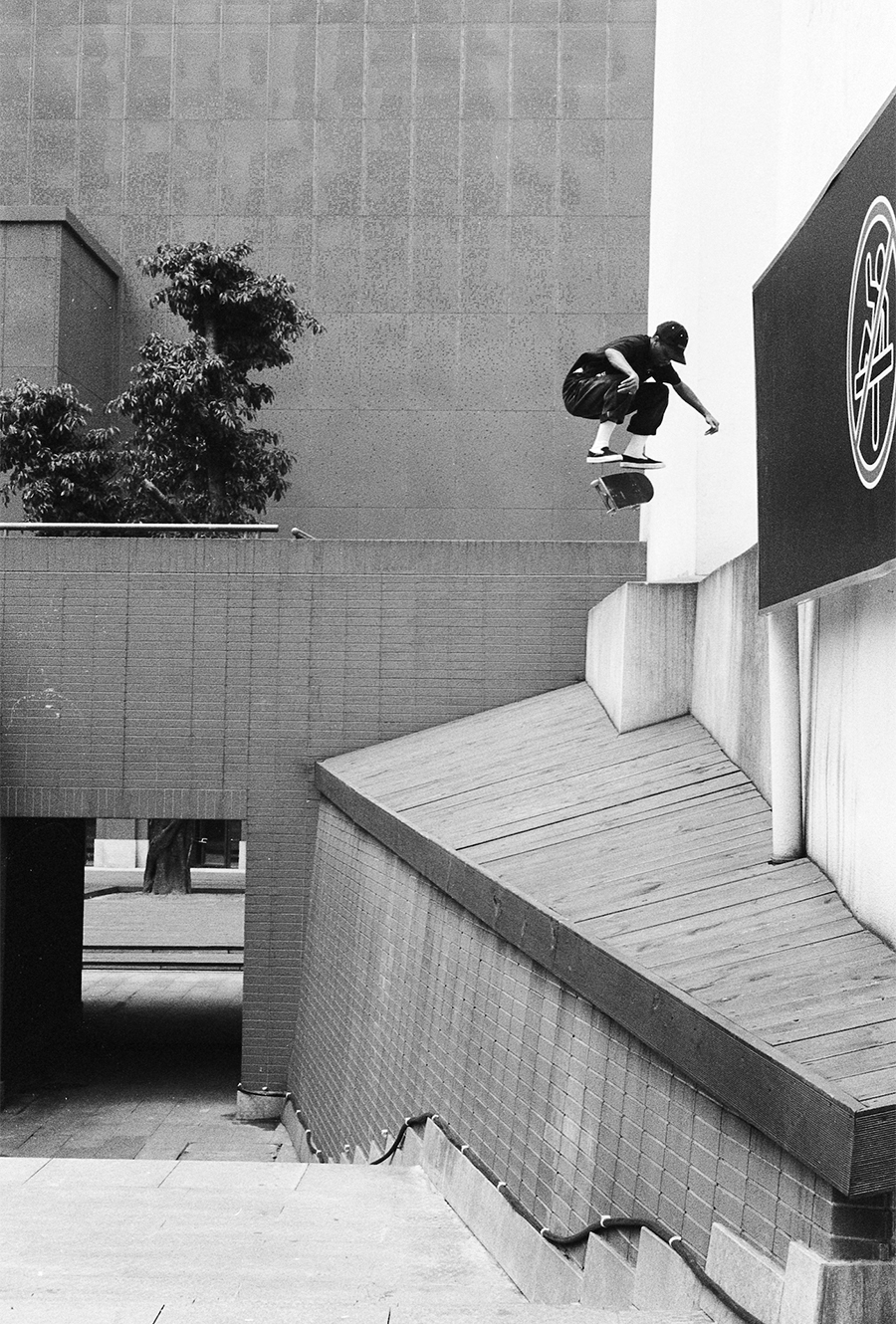 What are some skate videos that have influenced you and your crew?
W: We didn’t have local skate videos growing up in China, we only heard of 411VMs but never saw a skate video until I had an opportunity to live aboard. The Girl videos, Habitat videos, TWS videos, and 411VMs are the ones I worship.

Outside of Skateboarding, Tibetan director Pema Tseden is one of my favorite filmmakers. I’m curious about lives of the religious folks outside of big cities.

What goes through your mind when you see videos like Pretty Sweet where it’s mostly American skaters skating the same spots in China?
W: I’m stoked foreign skaters come skate in my motherland. After seeing multiple teams destroy Shanghai, Guangzhou, and Shenzhen spots, I wish more foreign skaters would come to explore other cities here.

Why should the skate industry and everyday skaters be interested in Chinese skateboarding?
W: For skate industry heads, I think China is a promising market for its infrastructure and population. We can make anything here, yet the skate culture is developing, so you gotta do investigations before signing a distribution.

For everyday skaters, we welcome you guys to come and explore our beautiful marble skate paradise and experience our culture after this pandemic. As we are pretty new to skateboarding, we don’t have much to offer yet, other than our marble and welcoming culture. 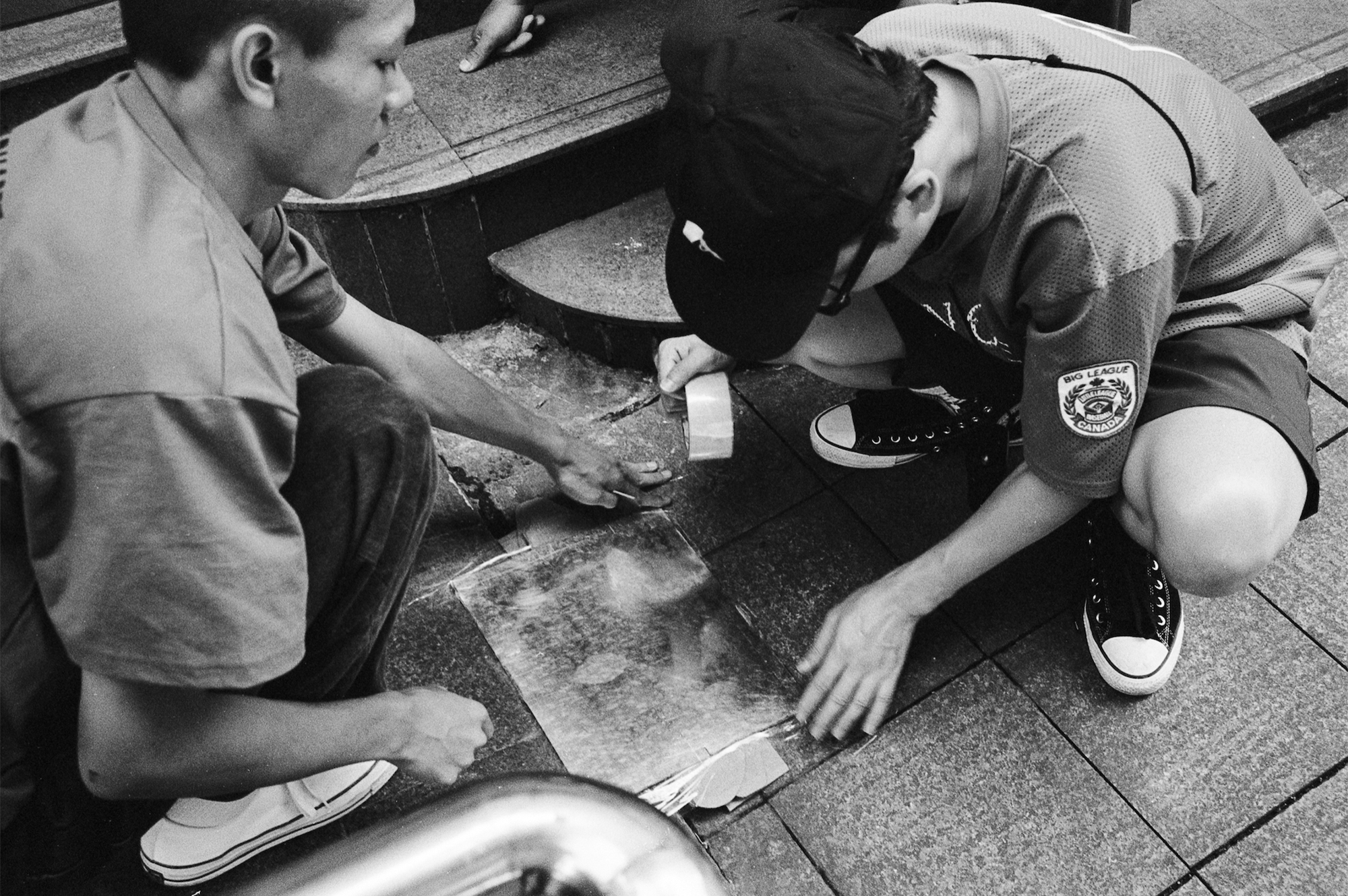 What is day-to-day life like in China right now?
W: We live in Shanghai and to be honest, life is pretty normal after the government contained the virus. We were able to travel, work, and live our lives since June 2020. We can’t travel abroad and still wear masks in public places, but life goes on. Lockdowns and restrictions still apply to some occasional outbreak areas. Other than that, we are chilling here.

We’re seeing crazy inflation and the skyrocketing cost of living prices in America right now – is it expensive to live in a city like Chongqing in comparison?
W: It’s not expensive to live in Chongqing. However, Shanghai is expensive! Housing prices are comparable to Tokyo and New York. If you don’t have a decent job in Shanghai, you ain’t able to afford to live in the city. This city is for the elites. Groceries are cheap though, compared to the US. We are seeing inflation in skate products recently too.

In China, what are some funny stereotypes that you hear about Americans?
W: American chicks are sexually open. American dudes are good at picking up girls. Americans are rich and living good lives. Americans like to party with hard drugs.