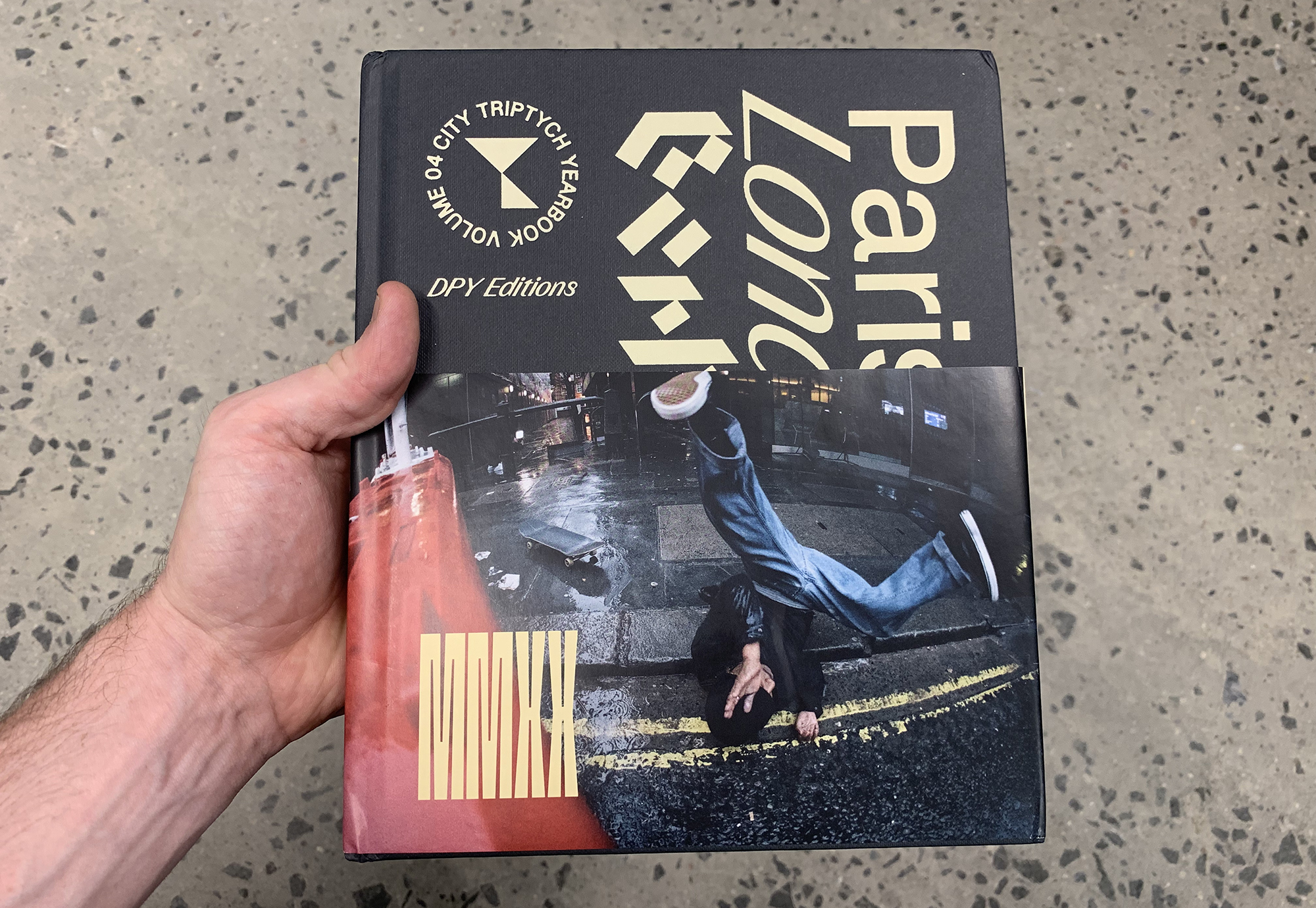 Skateboarding photography is in a weird place right now. The avenues for getting your photos physically printed in a mag are dissipating more and more every year. Some photos live, and die, solely on Instagram never to be held in the hands of the skater or photographer.

To preserve the gratifying feeling of having a physical copy of photographs, Thomas Busuttil, a Paris-based photographer and skateboarder, with the help of co-founder Stephane Borgne, set out to put together a series of yearbooks filled with photos taken by skaters in Paris, London, and Berlin. His latest issue, The DPY CityTriptych Yearbook Vol. 4 covers 2020, masks and all, and is in skate shops across the globe or on De Paris Yearbook website.

We gave Thomas a call to pick his brain and learn more about what goes into making these yearbooks, and what sparked the idea to do this. We also wanted to learn a little bit about the curation process, so we chose our favorite spreads and asked him to break them down for us.

What is the point of making the physical copy of this book if most people are consuming photos through their phones?
I’ve been thinking a lot about this question and I don’t think I have the right answer. Skateboarding became so big that it now needs to find its own subculture and develop its own counterculture. Maybe even what we’re doing, which is a physical yearbook where someone is actually telling a story with photos. If everyone was posting it on Instagram and Facebook, you wouldn’t be able to tell a story in the same way.

The internet doesn’t really belong to the one who is posting on it. In this book, the photographer’s name is always there. I’ve never published any of the photos on the internet. First, because I don’t think I pay the photographers enough for internet use – only for print and exhibition. Second, I’m never really connected to the photo when it’s shared after the second or third time. When it’s shared so much, the connection to the yearbook completely disappears. I’m trying to reach those who want to see the photos in full frame and with a full story. Not just in between an ass, a dog’s face, and some girls dancing. You’re not going to see the photos in the same way.

We were so angry with the aesthetic and the rules of photos, and now, it doesn’t exist anymore. People can just do whatever they want.

“Skateboarding became so big that it now needs to find its own subculture and develop its own counterculture.”

Being that 2020 was what it was, how is this yearbook going to differ from the previous volumes?
It’s interesting, but at least it’s real. I’m about to finish a book where everyone is wearing a mask, and a lot of the guys weren’t having fun. It’s strange because skateboarding this year is totally different than what it was like in the last few years. It took a lot of care and you will see the documentation of the moments where the guys are free. We still have to have a good view and some positivity. 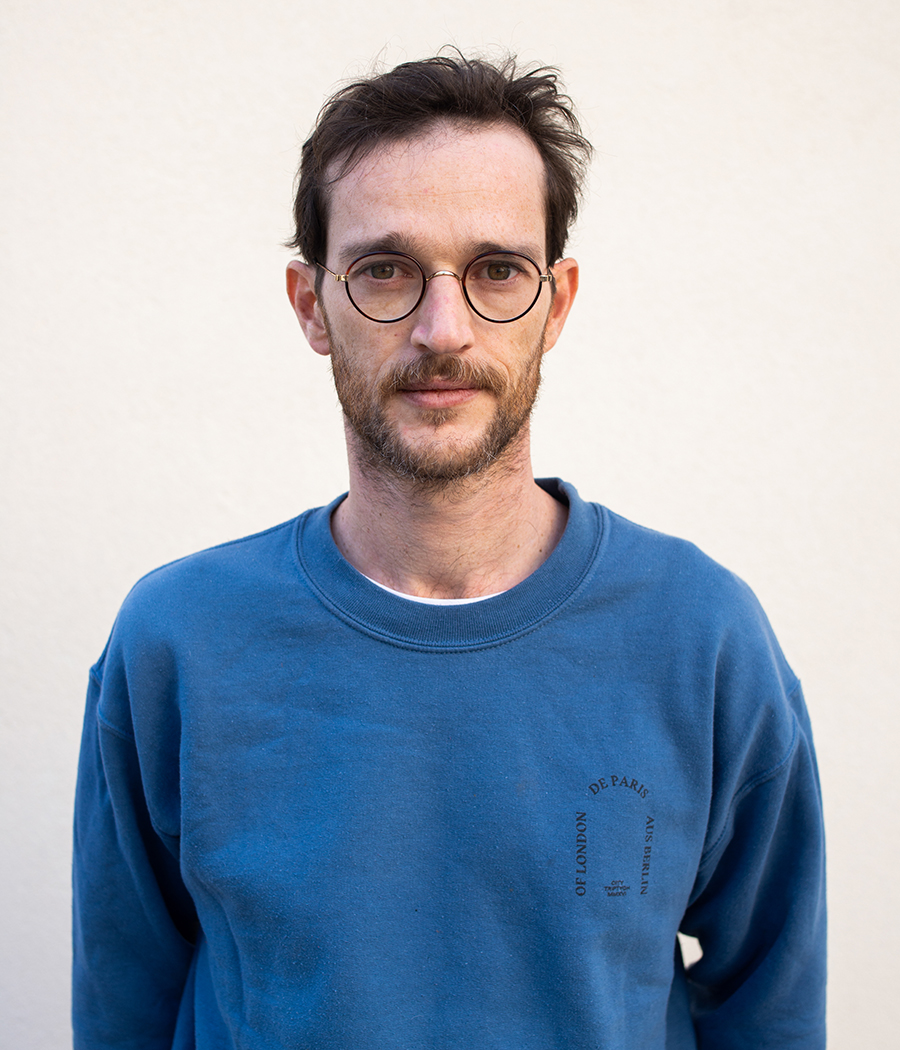 Why Paris, Berlin, and London?
It was a tough decision, but they are cities that are connected by train and had similar weather, and their continuity is being renewed. They aren’t too big of cities, so you could walk or skate through them, so they kind of felt the same.

Barcelona could have been another city, but it is almost too much like Disneyland in terms of spots. People don’t live with skateboarding the same way, it makes them maybe too hungry for skate, too much of the 100% “skate life.” In the other cities, you have to hustle a bit more to find your spots, to have a day with good weather, or pay your rent.

The difference from Barcelona culture could be because of the price of rent in London and Paris [laughs]. Just to be able to live in Paris you have to be able to make it through the month and you’re not getting paid enough as a skateboarder to afford an apartment in Paris. It’s easier to just chill and skate in Barcelona than to do that in Paris.

When you have a job, skating is a way to relax. When you’re only skateboarding, you get stressed about other things that aren’t that important. Now that I’m working 100% in skating, with these books and my other activities, I am skating even less and that’s a problem.

“I don’t want to make ‘The Best of the Year on Instagram,’ with the most liked photos or something like that.”

How hard is it to source out all the photographers and their photos?
It’s what is most interesting for me because it is also a part of the culture and the experience. I have been skateboarding for 23 years, so I have met some people and I’m also a little bit into the skateboard industry. Sometimes you just make connections and meet someone who knows someone who knows someone else. All of those relationships became natural in skating.

I am also looking in all the mags on who is doing what and I am just trying to check everything. 90% of what is published in the book is usually unpublished beforehand. I don’t want to make “The Best of the Year on Instagram,” with the most liked photos or something like that. 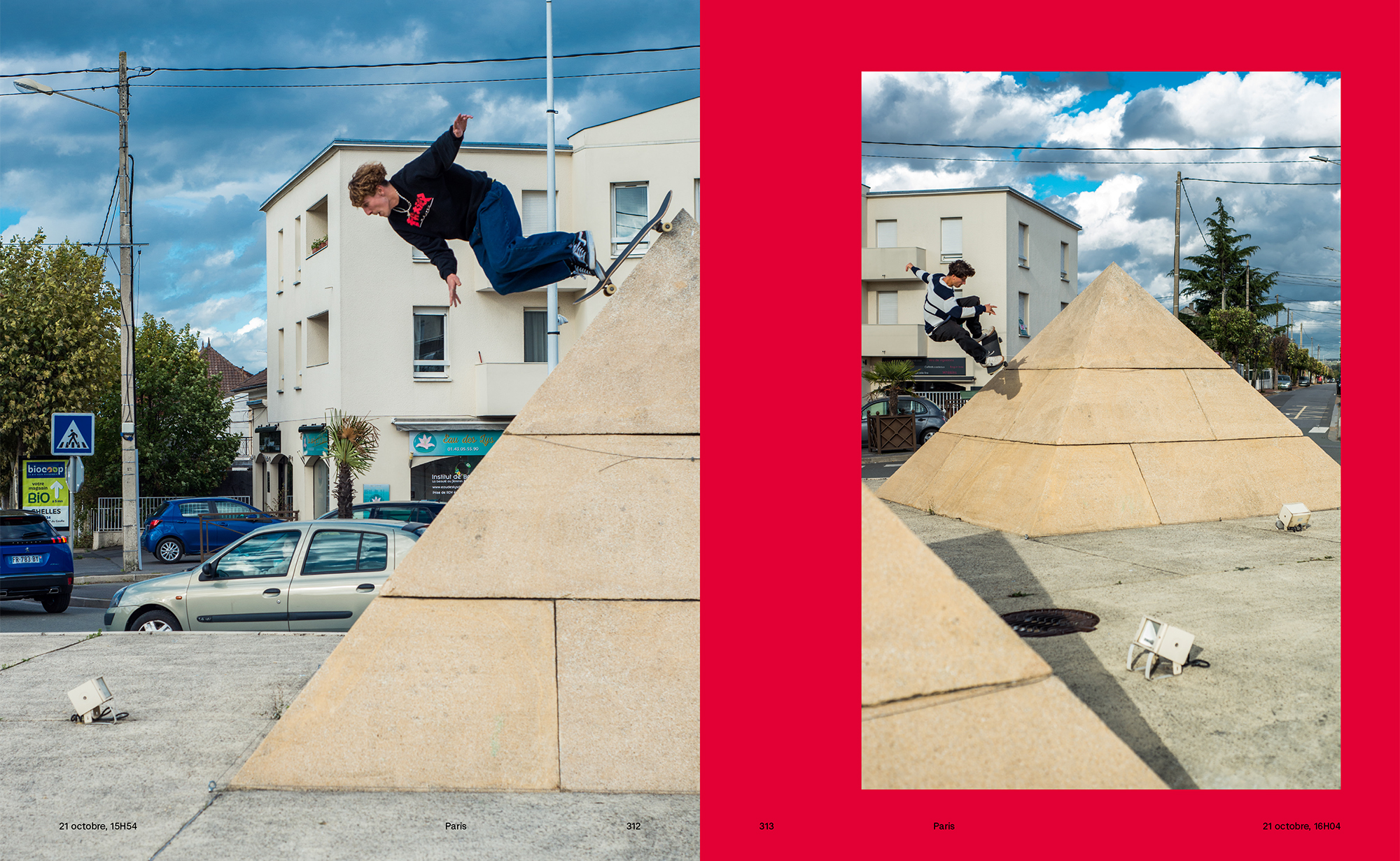 I wanted to ask about some specific spreads in the book. Why did you choose to run this spread in particular?
It is typically a non-Parisian spot. Those pyramids are on the way to the local indoor skatepark, Cosanostra skatepark. Since 2004, I have passed by in my car and I finally stopped. I’ve only seen this spot published once, in Guillaume Perimony’ Fishing Lines with Michael Mackrodt.

We finally went there for a session with some skaters from Titus, and the spot we discovered was much harder than we expected. It’s in the middle of a roundabout and you have steel strings between each stone block and the pyramid is pretty steep. So it’s a never-published spot I guess… and those pyramids just look amazing.

What does the spread portray about Paris?
It represents different ways to use a typical Parisian suburbs spot. You can read a lot of things in a photo, but sometimes it’s just skateboarding. 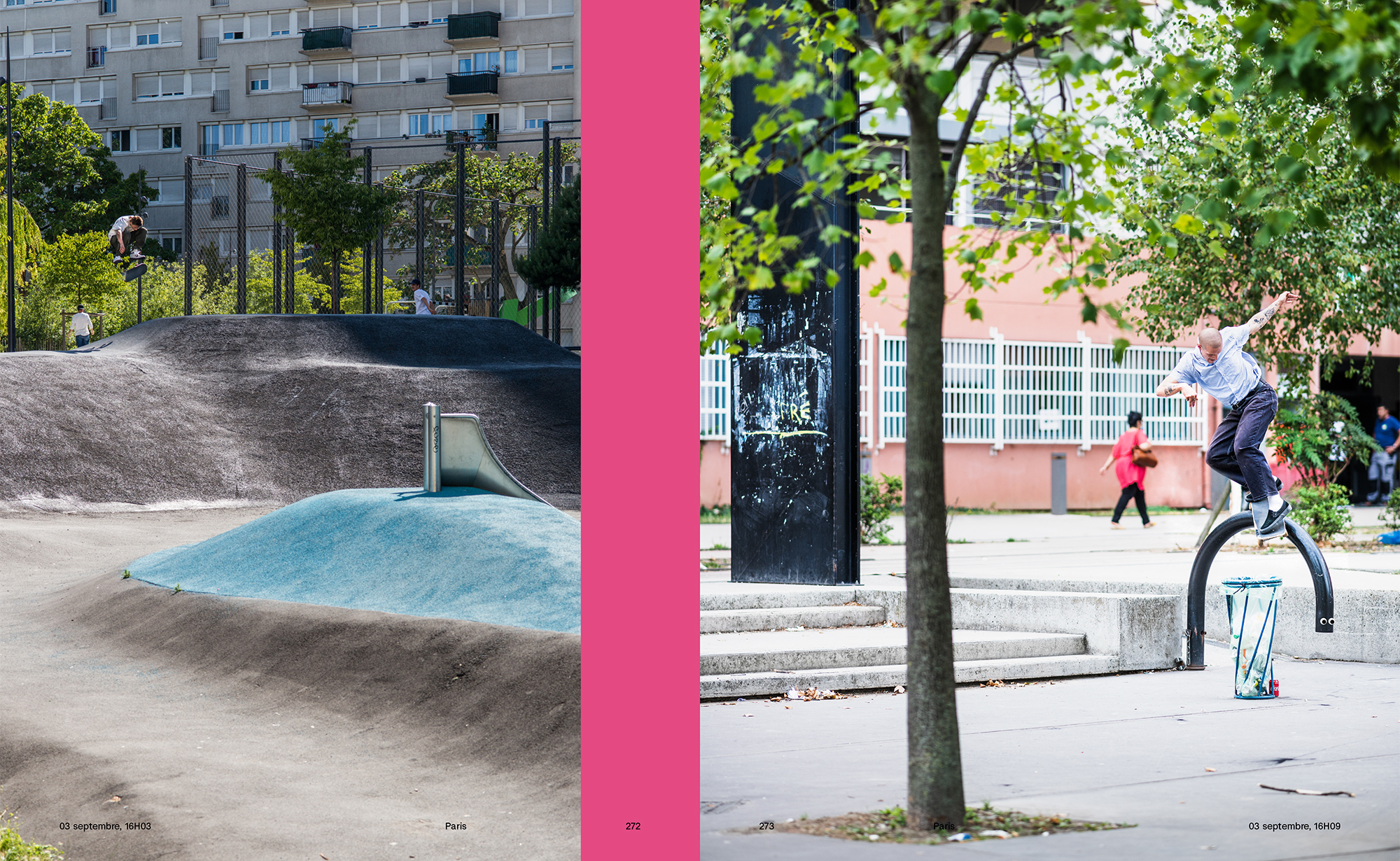 What was the idea behind this spread?
I really love the first spot, and I’ve been skating this area often for 15 years, checking the changes and spot updates. This one is really the best spot update from the past 10 Years.

The story behind the right photo is really cool, too. The fisheye version has been printed in Vague Mag, but the long lens was still really dope. I preferred using it instead of letting it go to the ‘gram. Val Bauer and Joseph Biais managed with the guardians of the building, to get the key to the locker and repainted the pole jam after skating it. Rumor has it they still have a copy of the key to the spot.

What part of this yearbook’s story does this image tell?
Go explore the fucking suburbs, don’t stick to Republique when you’re in Paris. There might be something better to skate around the corner if you dare to explore a bit. 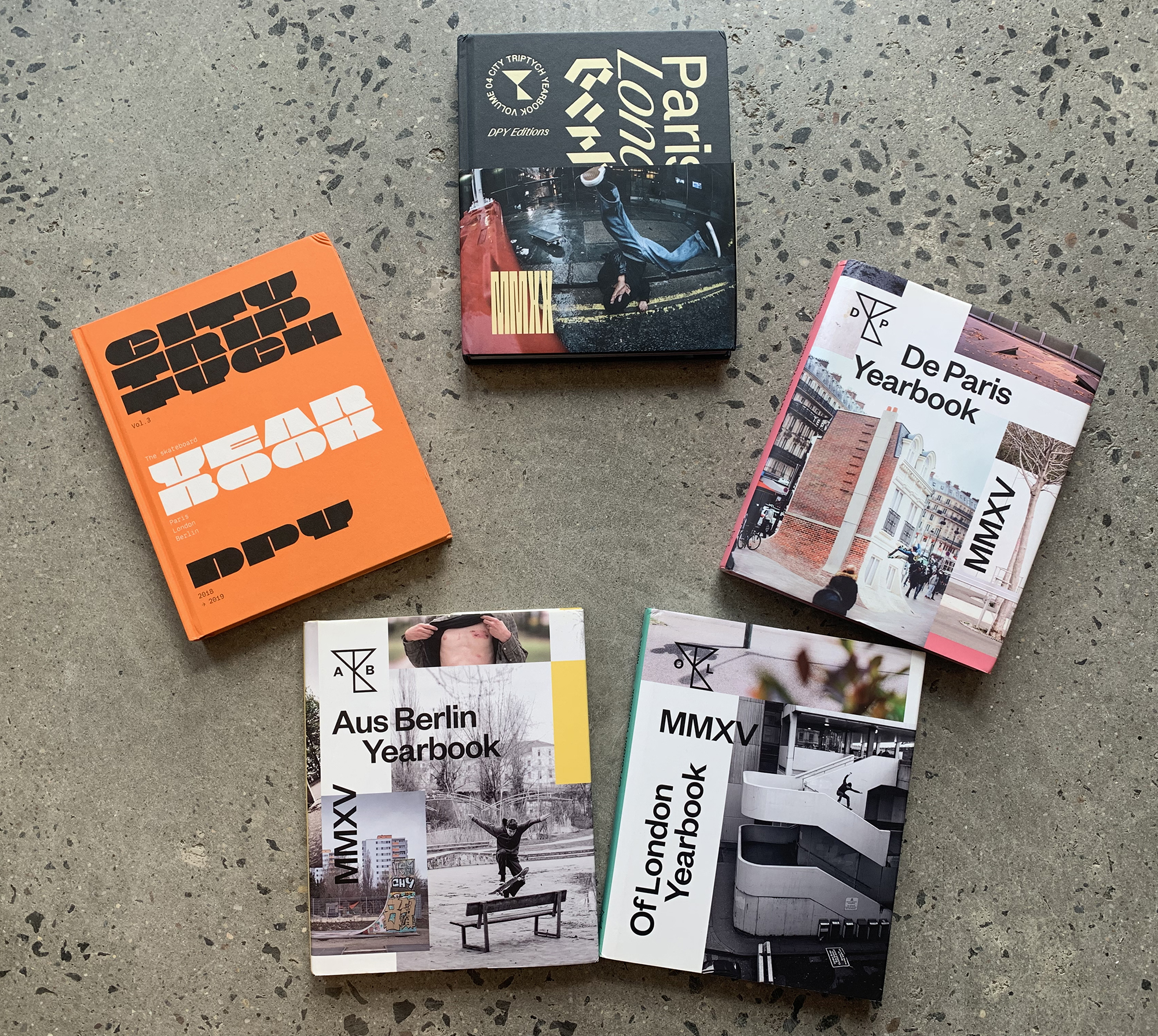 Printing books isn’t cheap, so how do you fund these yearbooks?
We finance it through partnerships with brands. It’s complicated because we cannot ask for the same amount of money as if we were putting proper ads in the book. But we try to be respectful and I only work with brands that have an actuality in skateboarding. If they don’t do shit, they don’t belong in the yearbook.

We’ve worked with Vans, Nike, Element, Carhartt, and local brands like Haze Wheels or Nozbone. Their riders are always in the book and are friends with us and they support us in the end. It’s more about being sure this project can finally be printed without having a proper big ad and some communication around it.

I’m not a fan of having to sell skateboard culture. That’s why I never pushed too hard to make commercials about the book. I didn’t want skateboarders to have to feel obliged to buy something.

If they feel like, “Oh great there are real skaters behind this,” and they understand the process, usually they’re cool with buying it. Most of the guys are really proud when they have the physical book and can share it in many different ways.

You mentioned paying the photographers, how much are you paying them?
Yeah, we try to pay €30 per page, so we’re spending roughly €10,000 for the photos in the book. Some of them have given their photos for free, but others are paid. So as I said, €30 is still low and you’re not going to make a big income out of it. But it’s kind of the only way to make it without ads.

Otherwise, we could just put ads in and we can raise everything. They understand why we do that and they’re usually happy to be printed in something in high quality that will last for the long term.

In France when you publish a book, you’re stored in the General Library of France with all of the books ever published in France. There’s a physical copy of the book there forever. So that’s also why I find that it’s important, not only for me but for future generations.

Now we’ve seen a lot of strange things during Covid and we’re not going to live the same way as before, and maybe this is one of the last copies where you can see people behaving in a way before Covid [laughs].