WHAT TO DO IF YOU CAN’T LAND A TRICK 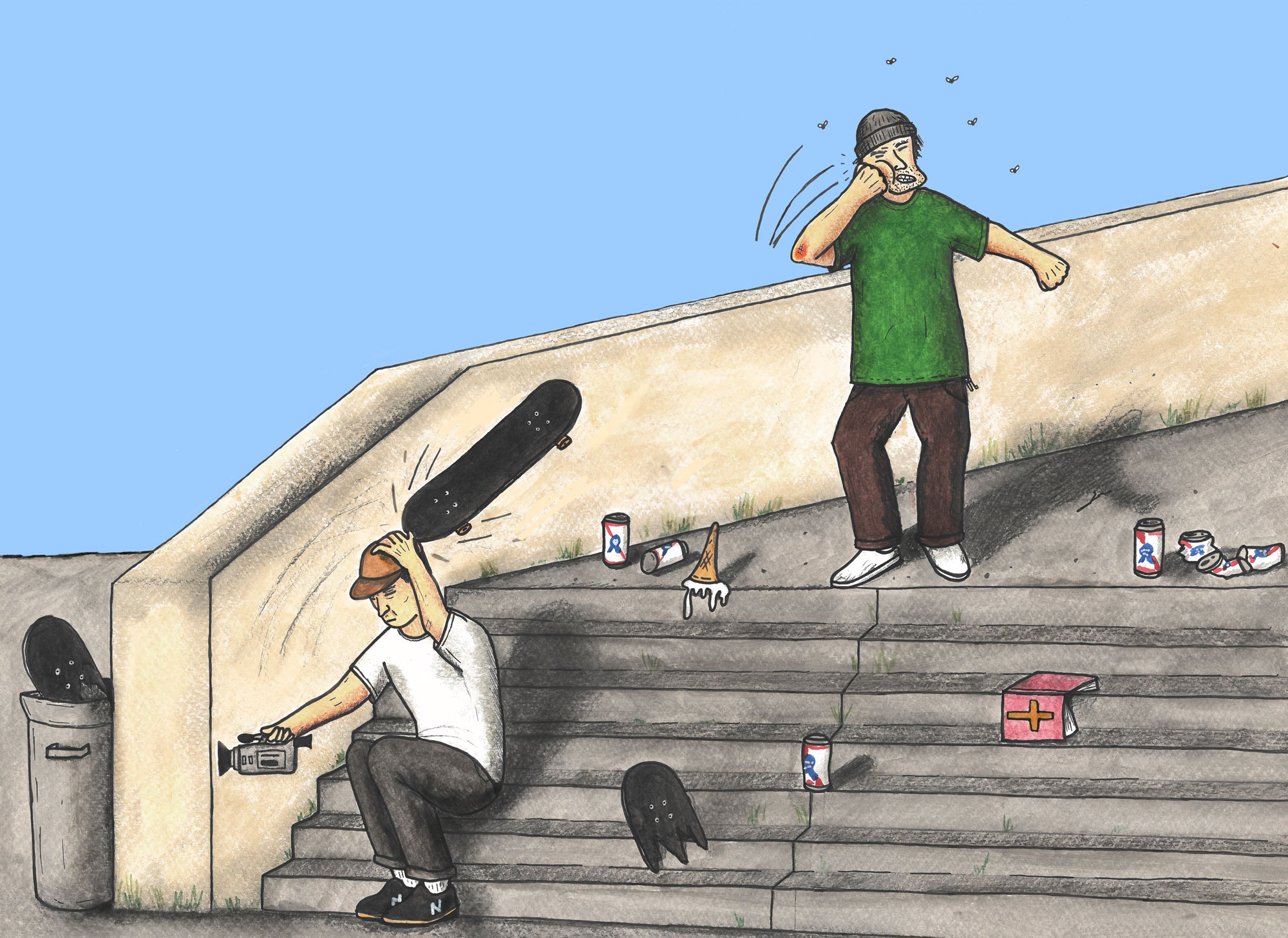 There’s a lot that goes on in the mind of a skater between the time of trying a trick and, hopefully, landing it. On a good day, landing something new might take a handful of tries. On a bad day, you might start to feel like you’re living in the first two minutes of Jerry Hsu’s Stay Gold part.

So whether you’re a die-hard, desperate for a tip to eke out another banger, or you wouldn’t mind a viable excuse to get out of trying the trick and go back to enjoying life, we compiled a list of recommendations to put to use the next time you find yourself in the middle of a trick battle.

It is generally agreed upon that two is the perfect amount of beers for skateboarding. One beer is just a tease, and any more than two might get you a little too tipsy to really focus on the trick at hand. So crack the magic number and leave the rest of the six-pack in the shade so you can celebrate the trick with a cold-ish one. If you’re really desperate, you can also shotgun the two beers to settle your nerves quicker.

Bargain with a higher power

If you can’t land a trick, it’s probably because someone, or something, is trying to punish you for telling your homies you “got this right here.” In these cases, it’s best to communicate with that higher power directly and ask them to turn your curse into a blessing. P-Rod used to pray into his hat when he needed to land a $50,000 trick, and that seemed to work well for him. If it doesn’t work for you, you’re probably a worthless shit.

If you can’t muster up a hearty shit of your own, find the closest pile or bag of dog shit and put it right near the landing. Worst case scenario is a skater catches you doing the dirty deed and you’ll never get the “Wanna skate?” text from them ever again. Best case scenario, a pedestrian catches you taking a shit and you get to spend the night in jail, not trying the trick. Weigh your options and maybe keep a dog on the sesh, or at the very least some laxatives in your bag.

Blame anything but yourself

The weather is the obvious culprit, but if the weather is undeniably perfect, blame the crack in the sidewalk, the sound of cars passing, or the fact that Mike Sinclair never ‘liked’ your sponsor-me DM. Hell, you can get away with blaming your friends for both talking too loud and not being hyped enough. When all else fails, just blame the spot (even though you were the one who suggested it).

This tip is for the masochists, the handrail skaters, and the freaks who can actually put their thumb through the can when they shotgun a beer. If you’re unfamiliar with the technique needed to punch yourself, watch Kerry Getz do it flawlessly.

A lot of these other tips are for the more pessimistic skaters, but if you’re one of those positive weirdos with a cheery disposition, you might prefer a different route.

After every bail, say something like, “Okay, right here for the boys!” or, “Drinks on me if I land it this try.” This mindset will make your filmer and your broke friends eager for you to roll away. Just be careful of throwing out too many affirmations because you might start to become the insufferable PMA guy.

This one is tricky. You might get some great b-roll clips to open your part with, but anyone in the surrounding area will think you’re tweaking out on something concocted in a basement laboratory. Make sure you have a friend there that rides a similar board size and shape to yours because you’re going to have to shamefully ask them to borrow it for a few tries after your meltdown. Then when you freak out again and break their board, you can call it quits and go home to meditate on the toilet.

Blow up the spot

If all else fails, there’s one forbidden option: go nuclear and call the cops or security on yourself. Try to disguise your voice and definitely give a fake name, because you do not want to get caught by your friends. Even if the cop gives you a $50 ticket, consider it the cost of saving what little sanity you have left and getting you out of trying that dumbass trick that turned out to be way harder than you thought.