WHO’S THE MAN BEHIND THE WEIRD NAIL SKATEBOARD? 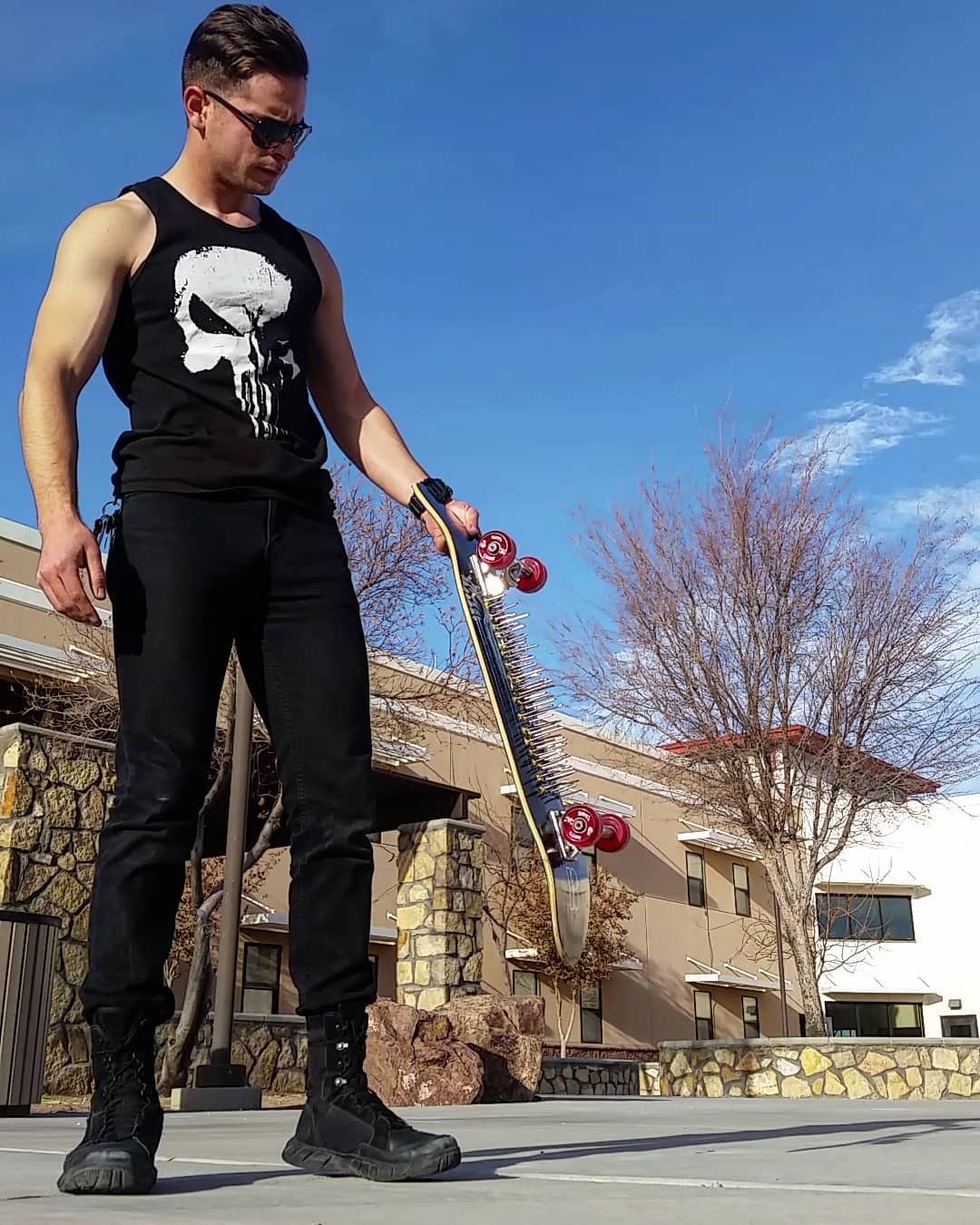 There’s a lot of skaters that try hard to appear artsy and weird but there are very few true weirdos.

So it was exciting to find Saul Ojeda, a skater in the military that throws all the typical skater cliches out of the window. Not only does he not look like a “cool guy” skater, but Saul takes it a step further and hammers nails through his board for some added motivation to land tricks.

With little contact to the outside world, Saul uploads a fair amount of his unique videos to Youtube. Besides clips of him skating in army boots under the watchful eye of his commander, there were also videos of him flirting with a robot, dancing with his homies, and going top speed on his Harley.

His screwy personality and unique sense of humor intrigued me, so I reached out to try to learn more about Saul and what drives his one of a kind lifestyle.

How did you come up with the idea to hammer nails through your skateboard?
I was in the military, isolated and away from family, and putting nails into my board seemed like a fun idea on how to spend the time. I wanted to create that “shock” reaction when people saw me attempt a kickflip with nails where I’d get “punished” for not landing it.

I used to take extreme care of my skateboard, but now that I can more easily afford decks, I have been trying new things. Like, I shot a skateboard with a 357 revolver once. I was just curious to see if you could possibly use a skateboard in a self-defense situation. You can’t.

Who’s your biggest inspiration in skating?
Jaws is definitely my biggest inspiration. I love his style of skateboarding, focusing on the simple tricks, but at high magnitudes, like ollieing down a 25 stair set or kickflipping down a roof. Insane landings. I always wished I could do what he did.

Would you ever try boardslides with the nail deck? How about Casper stalls?
I’d definitely try a casper stall, but I don’t think a boardslide would work with my spiky board. The screws would get pushed out. I’d much rather see a darkslide on that board. It would be pretty epic. Unfortunately, I have not yet learned to darkslide.

Have you tried it with the nail facing upwards, yet?
No, but I have landed on the nails pointing up before, and they actually do not stab you. The surface of your shoe protects you, so you could say it is pretty safe.

“This is something you’ve gotta do on your own at your own risk for that extra fun.”

Do you see this becoming a trend?
I highly doubt it. No one wants to be liable for kids getting hurt. This is something you’ve gotta do on your own at your own risk for that extra fun.

Do you put nails anywhere else that they’re not supposed to be?
My Harley is barely two years old. Once it gets a little older I’ll definitely do some nail customizing.

What kind of Harley do you have?
The most classic looking one, a Softail Slim. I always knew I’d end up riding a Harley, it’s just the next natural step after a skateboard. And, of course, the first thing I did when I got it was ollie over it.

Are you a masochist?
I stopped feeling pain after my crush started dating someone else in college.

What kind of music are you listening to while filming these tricks?
Definitely metal. I’m always blasting As I Lay Dying, Slipknot, Killswitch Engage, or Attila when skateboarding. The music helps you to completely upset bystanders. One time I got punched in the face by a bystander, and up to this day, I do not know what I did to piss him off.

What was your childhood skate crew or scene like?
I couldn’t afford a skateboard when I was a kid. I got my first skateboard as a Christmas present from my aunt when I was already a teenager. I didn’t start early enough to develop those keen technical skills, but having that skateboard definitely changed my life. I wouldn’t go anywhere without it. San Diego has great weather all year round, so I could ride it to school every day.

My skating crew has always been me and my cousins, but since I got them skating earlier, they got way better than me. We’d mostly ollie over stacked up skateboards and down stair sets. Once they started doing laser flips and hitting rails, they left me behind.

As someone in the military, how do you feel about skaters wearing camo pants? Is that stolen valor?
I don’t mind it. If anything, I feel respected seeing people imitating the military. Not my style though. I’m always in black pants, and I’m shirtless to even out the tan.

Is an army boot your skate shoe of choice?
I skate in these comfortable and flexible Oakley military boots, but I also use them when I ride my motorcycle. Unfortunately, I got in a motorcycle accident and made a hole through them. But instead of dumping them, I decided to use them as skating shoes. I had plenty of pairs. I wouldn’t mind a sponsorship from Oakley.

“I wouldn’t mind a sponsorship from Oakley.”

Would you accept a challenge to wear some Vans Slip-Ons for the next edit?
Yeah, I could totally do it with Slip-Ons. The nails are not as dangerous as they seem. They did not go through my boot, even when I landed on them.

Is it hard to skate while in the army?
On base, I would always skate on the tank roads because they were completely empty on weekends. Plus, I am not supposed to be shirtless, or skateboard without a helmet on base, but there was no one there to enforce the rules.

However, I am not able to take the skateboard with me to deployments. We get a specific list of things we must pack.

Many times I’d miss my last bus home from the base, so I’d cruise on my skateboard for over 15 miles all night. The sun would come up to me still skating. I used to have a lot of fun ollieing around the city and primo flipping the board at stoplights. 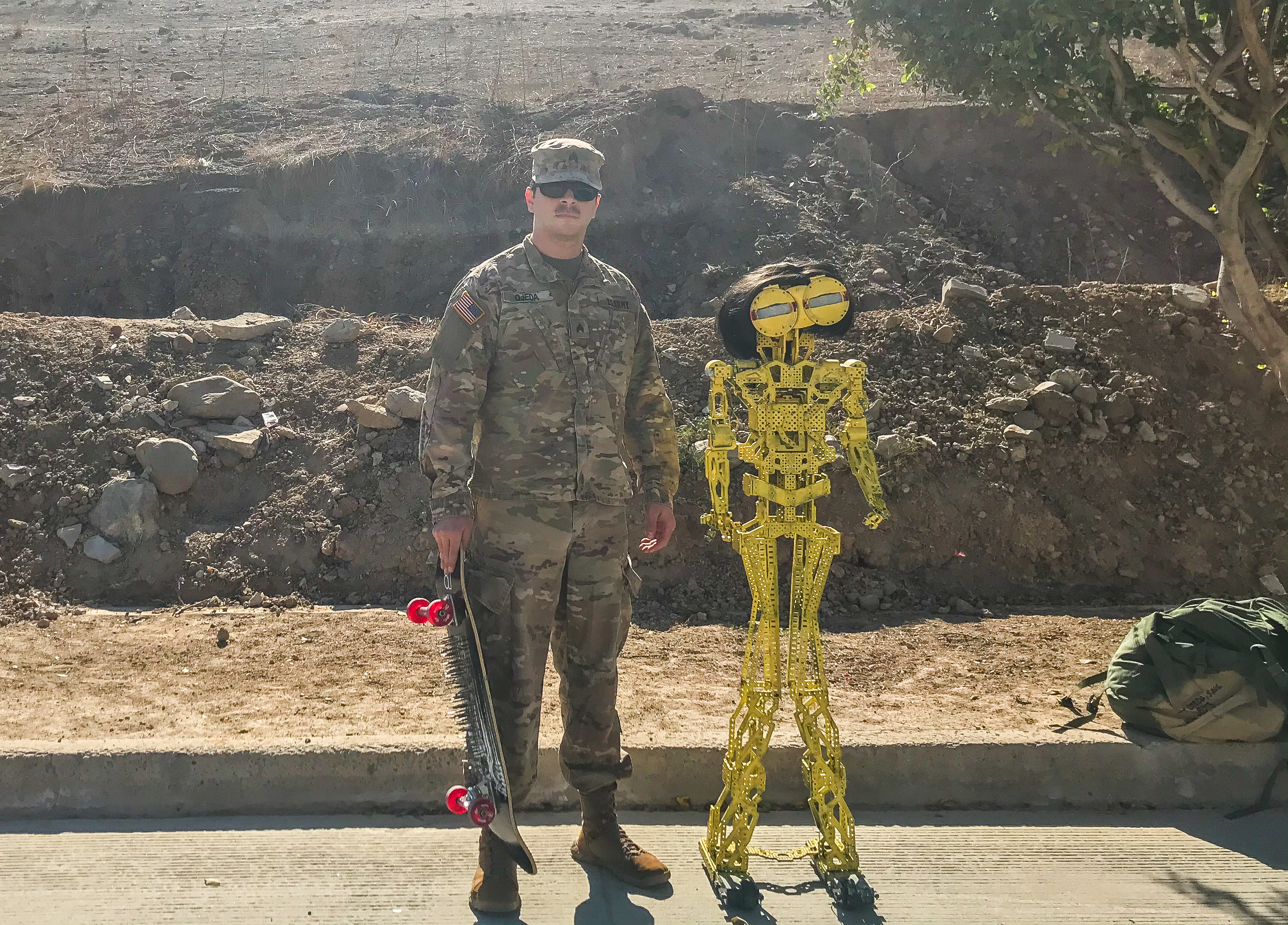 On any of your deployments, did you ever see a skate spot that made you wish you had your board with you?
I wish. There is nothing but sand out there.

Where were you deployed to?
I didn’t get deployed to the Middle East, or at least the real Middle East. I was “deployed” to a “Middle East” replica built by the Army in one of the country’s big deserts for 30 days at a time. It was to mimic the real thing, with real Middle Eastern buildings, Middle Eastern actors, and everything. Those trainings were probably more stressful than actual deployments. But, I heard they get good food in Kuwait.

Have you ever tried kickflipping over a landmine?
I haven’t, but I have ollied down a stair set next to a US flag and military tanks. Pretty scary though. I don’t want to find out what could have happened to me had my bosses caught me. I did it on Sunday mornings when there was no one around.

I heard that you have a robot to help you with girls, what’s that all about?
I have a degree in engineering, and I joined the military to get rid of my student loans and help me get on my feet, so when I was alone and isolated in the middle of the desert, I thought building a girl would be the sane thing to do.

To build it, I simply ordered a bunch of metal pieces, motors, servos, sensors, screws, nails, etc. from robotic companies. I had all the time in the world, so I started putting things together until it started to look like a human. That’s when I realized it was missing a wig.

When you get a girlfriend, will she be jealous of the robot?
If she’s short, then maybe. That robot has got a decent height.

Do you hope to live in a world run by robots?
No. I wouldn’t want to get my dad replaced by a robot. But I would definitely enjoy building more for my home. My next project will probably be a controller controlled Roomba that shoots my revolver.

Have you ever been told that skating with nails is a bad idea?
All the time. Don’t expect support from a single person.