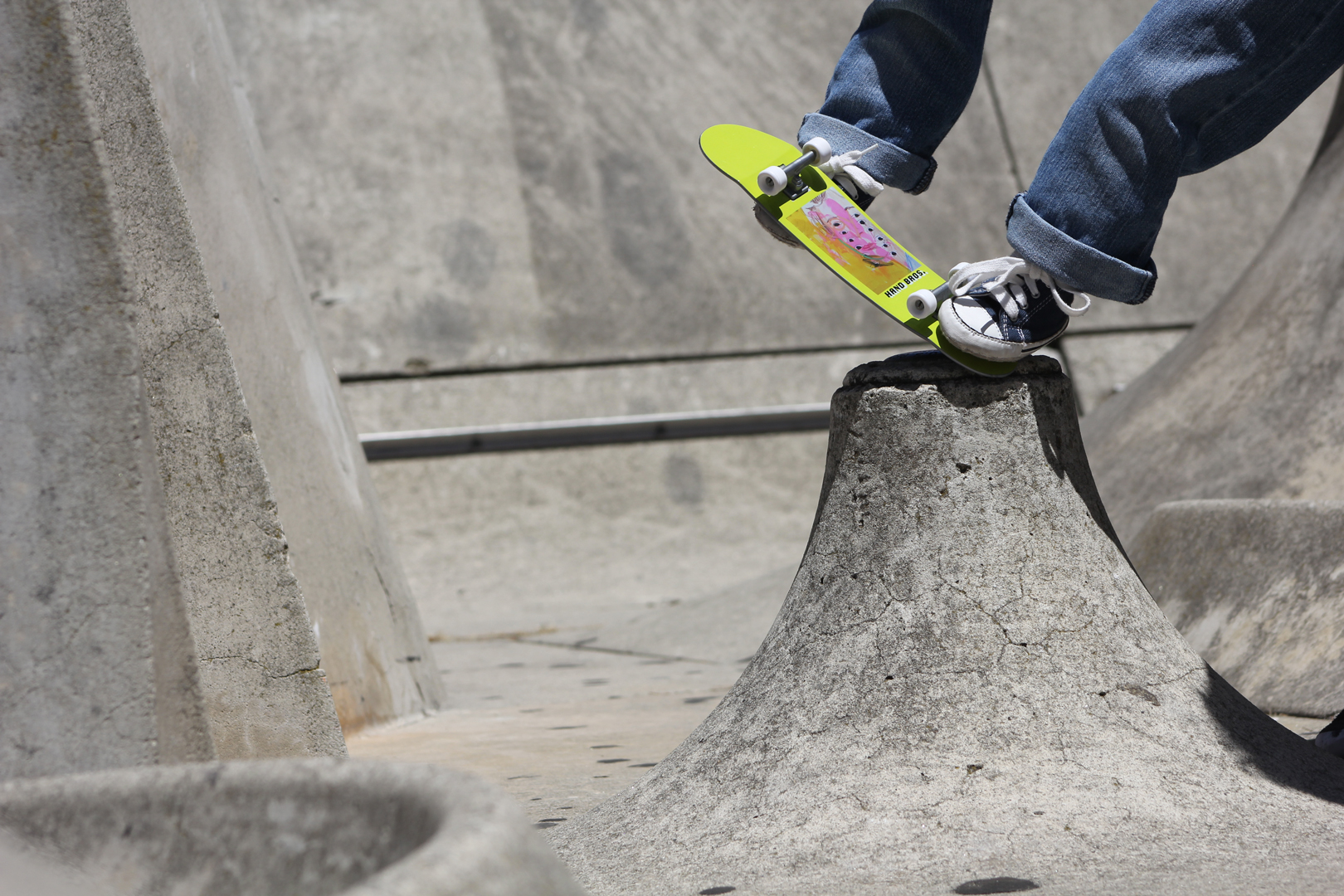 When I’m on my deathbed watching my life flash before my eyes, I’m going to regret most of the time I wasted scrolling Instagram. But I won’t regret the ‘Gram entirely because it led me to Handbros Handboards, the most bizarre excuse for skate nerdery I’ve ever seen.

Handbros Handboards is a tiny “brand” of cheap plastic handboards made by a guy named Jason out of his San Francisco apartment. They’re kind of like the handboards that Tech Deck used to make, only with less kooky graphics and real grip tape. And since Jason films “clips” at mini street spots using toy feet and baby shoes, the whole thing has a distinct Japanese mini food vibe.

Maybe your hands are too fat to fingerboard, or maybe, like many of us, your appetite for skate-related paraphernalia will never be totally satisfied. Whichever the case, you clicked the link, so now you must read the content (or at least watch the first GIF).

If Tech Deck called you and offered $50,000 to buy your Handbros brand, would you sell it?
That’s probably worth it but then what else would I do? $50,000 wouldn’t last you too long. A short-lived addiction and one bad purchase and it’s all gone. Average rent in San Francisco is $2,000 a month, so that’d be two years of rent and then it’d be gone. I’ve seen kids burn through $50,000 in a bar tab in a night.

You’ve seen someone spend $50,000 in one night at a bar?
I grew up in Naples, FL where that jenkem story came out and there were a lot of really rich kids there. I saw their bar tab and it makes the rich kids of Instagram page. They bought seven bottles and table service and you’d see five digits on the receipt, like no problem.

Your handboard clips almost look like real skating. What’s the story behind this?
The whole thing started three years ago when I moved to San Francisco and ruptured my achilles tendon. For six months I couldn’t step on a skateboard. I was losing my mind and thought that might be a good time to try something other than skateboarding. Handboarding ended up being a good supplement to that void because it gave you a similar feeling.

It wasn’t like, I’m injured, time to handboard. I’ve seen other handboard videos but they always use that boring angle of some grown-ass man playing with a toy on his kitchen counter. I thought it might look funny to make it super realistic so I started taking it to little street spots. Like spots that look like real spots but they’re one-fourth the scale.

So you go spot searching for handboarding “street” spots?
It’s the same as a skate spot. If I see one I’ll take a picture and then write the crossroads and go back to it. You know that thing where even when you’re 80 you’ll see a little curb cut and be like, “Oh, that’s cool”? Now I have that, plus miniature. It’s a whole new messed up obsession. Now you’re focusing on real skate spots and these weird little spots. I might be in too deep. 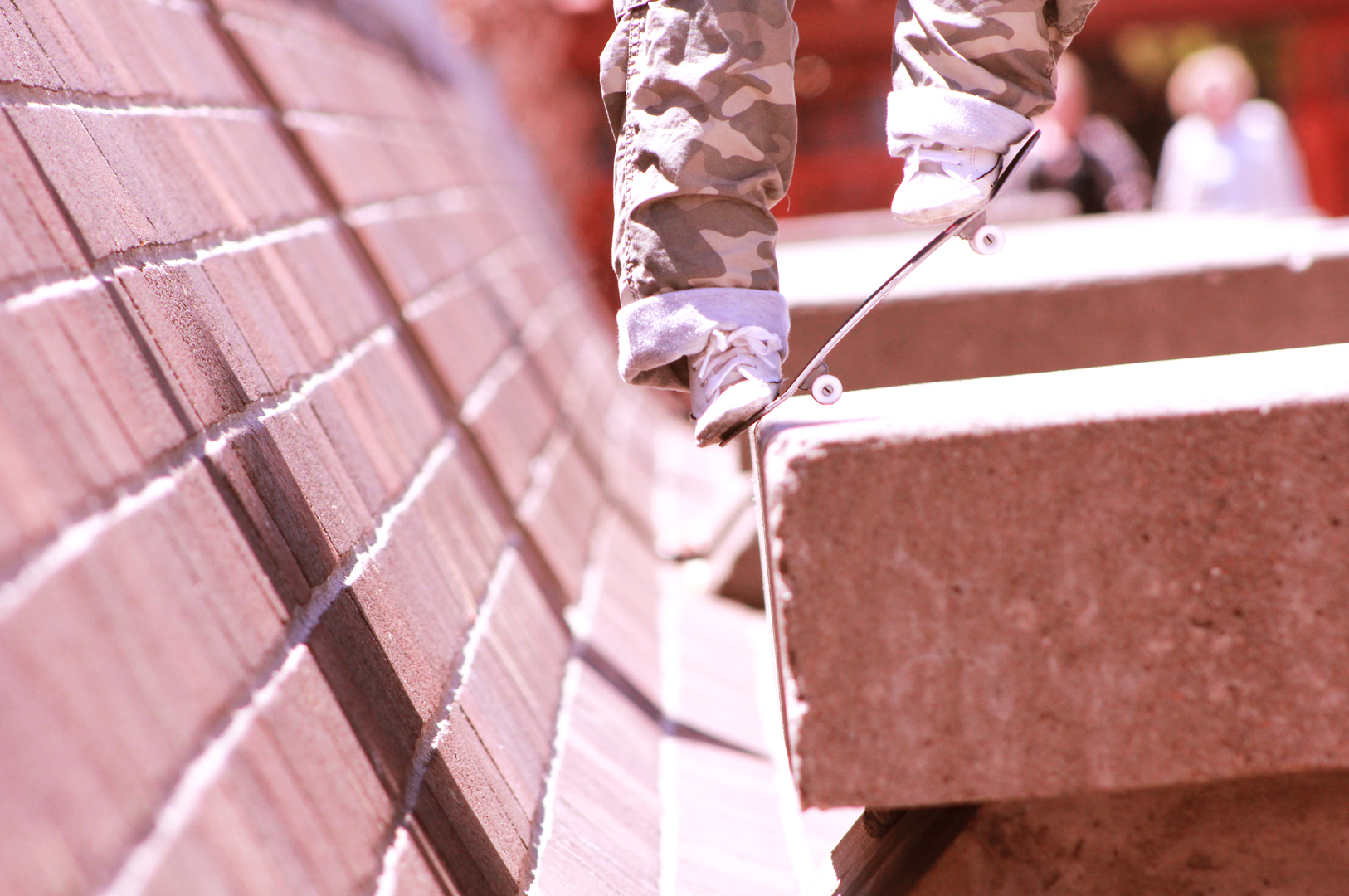 little board in big china banks

How did you figure out how to make handboards?
I thought making my own would be cool and could seem like a mini skateboard company, so I started researching how difficult or easy it would be to do a plastic manufacturing. While reaching out to manufacturers I ended up finding one who could do them with all my friends’ art graphics.

Just like skateboarding, there’s a standard for widths. For handboards it’s 10.5-11 inches long and 3.2 inches wide. The manufacturer was familiar with making similar plastic toys, then it took six months to get them through freight-shipping, which was crazy to see. It was like four pallets full of stuff. I was like, “Oh my God. Dreams do come true.” But then I was like, “Holy shit. This is so many handboards.”

How does the handboard size compare to your dick?
It’s matching perfectly. 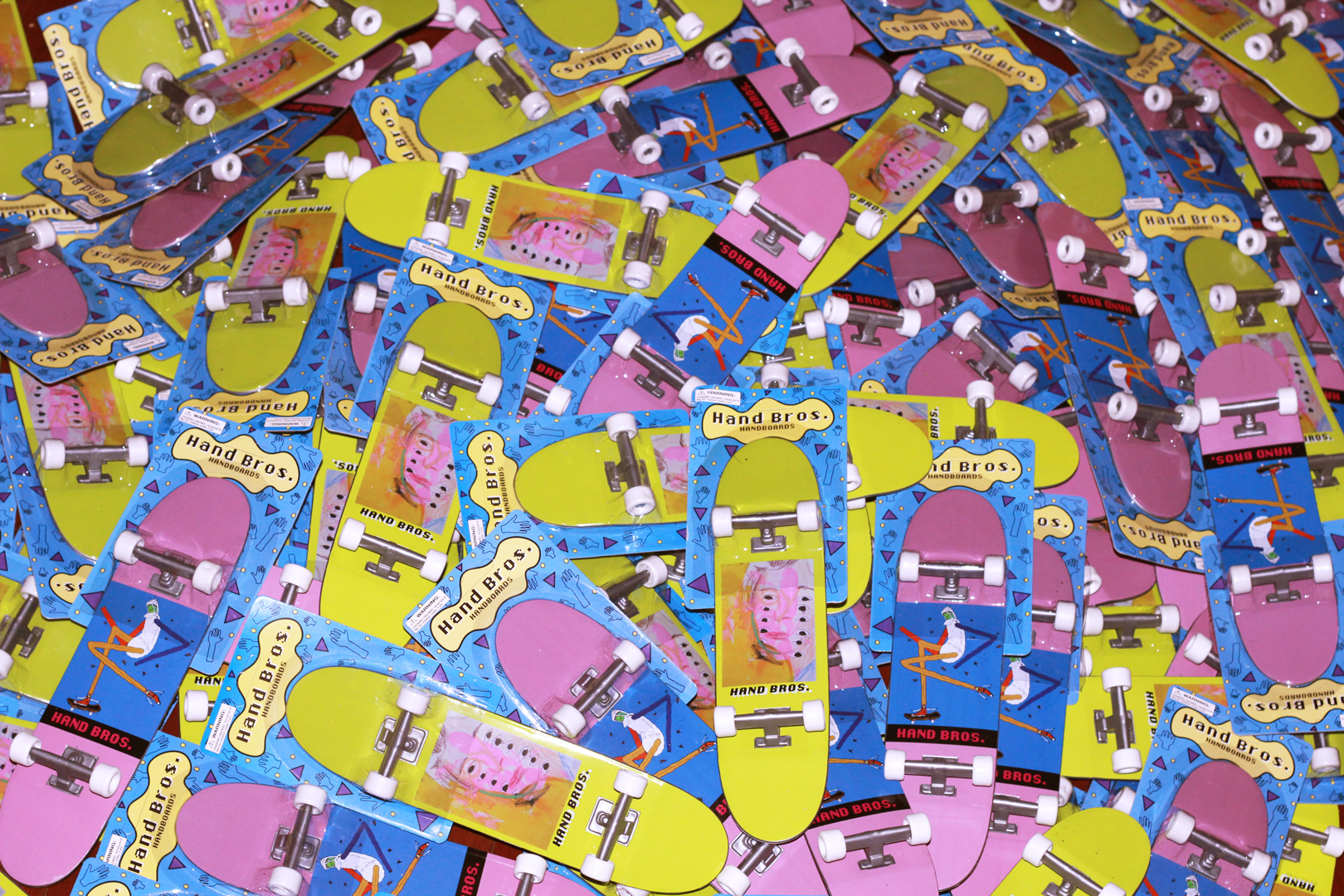 How much do your handboards cost to make?
It’s somewhere around $2-5 a board. But that $2-5 could have been 50¢-$1 if I was a big corporation with a warehouse. I do free shipping in the U.S. so that’s usually $3 per shipment, because I built that into the full price.

You sell them for $9.99 each so you’re barely making any money off them, right?
I hope I make something off of all this effort at the end of the year. It’s kind of a mystery. Until tax season I’m like, hopefully I have money plus in my bank account rather than minus. It’s definitely minus right now. But that’s the way it goes when you start something. I saved up money for a couple years then used that toward this project. It was several thousands of dollars, and I don’t trust cryptocurrency or any of these trends. Fuck that, might as well start something I like to do.

“Skateboarders that take skate culture too seriously are the ones that end up missing out on life experiences outside of skateboarding.”

Would you rather be caught fingerboarding or handboarding by your favorite pro skater?
I don’t know but I hope if someone saw what I was doing they would get it. That question assumes this cult-like mentality skateboarders have about skateboarding. Like if you want to be a part of this cult you should be ashamed of and bash anything that wants to be radical but is not skateboarding. Not saying handboarding is radical but the skateboarders that take skate culture too seriously are the ones that end up missing out on life experiences outside of skateboarding.

Yesterday I saw some kid take his shirt and shoes off to ollie into the Embarcadero fountain. It’s super gross. People piss and shit in it all the time. I’ve personally peed in it a few times. So everyone was standing around watching this kid about to jump in it and it’s like, that’s pretty fucking stupid. Some kid about to get tetanus or hepatitis. You see so much crazy shit all the time, who cares. Some people who aren’t involved in skateboarding will see me handboarding and they’ll be like, “Oh, I understand. I respect that, that’s funny.”

Which household items are best for handboarding?
Towel racks are perfect little rails. The bars you put your towel on to dry off, those are the perfect little spots. Then shoeboxes.

What’s the most difficult trick you’ve landed on a handboard?
I did the pop shove-it nosegrind and then you wrap your back foot around the truck. I’ve always wanted to see somebody do that. I remember seeing Fabrizio Santos do a one-footed crook on a trash compactor and I thought it would be funny to wrap your foot around. It’s funny to imagine tricks you always wanted to see, like circus tricks. Just something weird where it looks realistic and you’re like, “Holy shit. Was that a one-footed back noseblunt?”

Would you ever make hand longboards?
No, I don’t think so. No longboards.

What would a hand longboard look like?
I guess it would be a long dookie stick with no concave. They’re so many of those Boosted people in San Francisco, it’s insane. I saw an electric-powered Penny yesterday. It was this motor that went from truck base to truck base and I guess you hold the throttle controller. They don’t get too much love here. 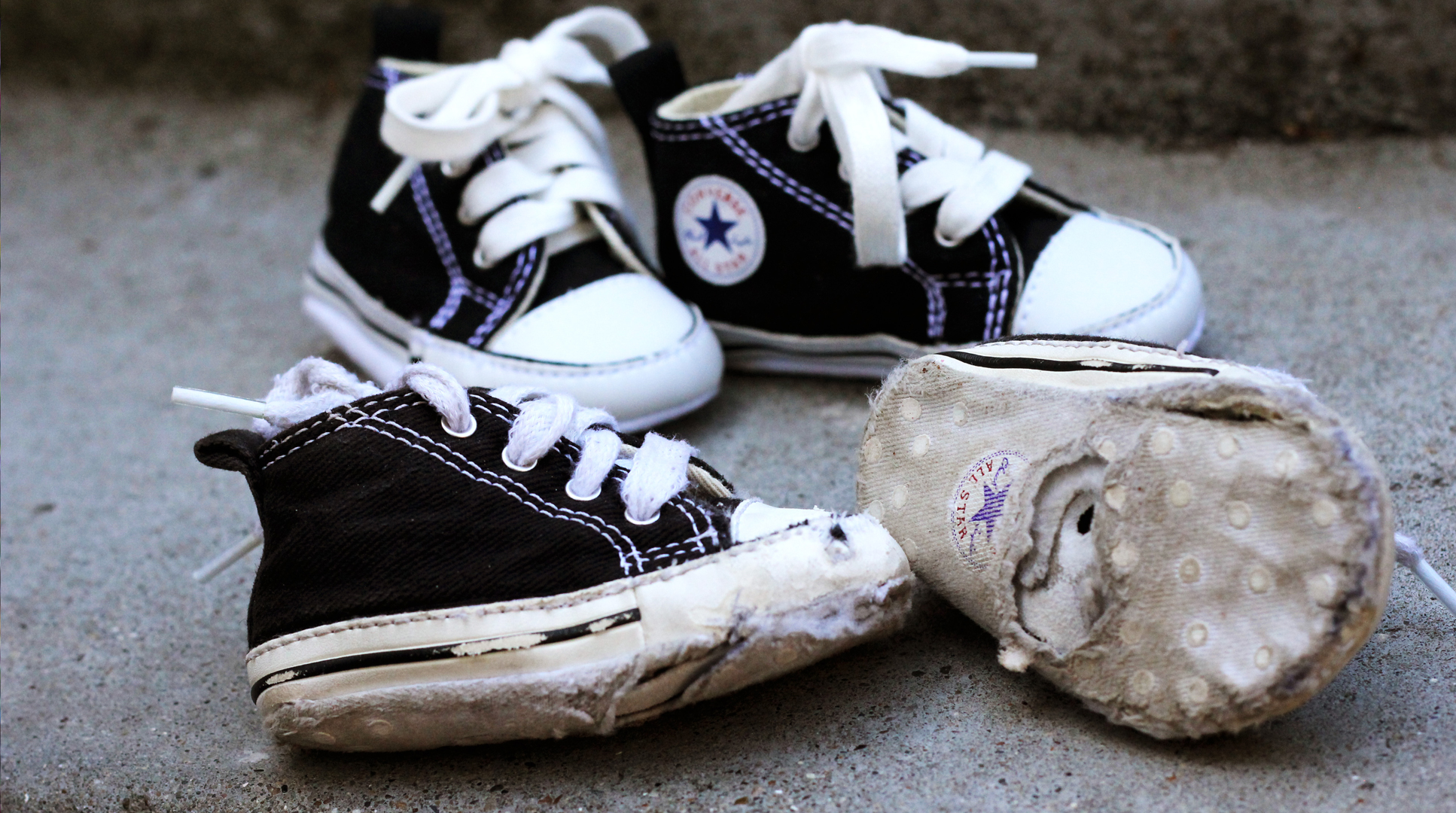 Any plans to put together a handboarding team?
That would be cool. The only thing is if somebody were to send me footage of that super boring angle of them selfie-ing in their kitchen, it’s not really exciting. I’m kind of the only one that can make stuff that looks miniature and realistic, so it’d be hard. Maybe I should hit up Converse and see what’s going on with the old infant department. I’ve actually blown out a pair because of the grip. I Shoe Goo’d one recently. I wonder if they’d be down to do some type of flowgram. I just wouldn’t even know who the TM is of the infant department. They’d just be like, “How old are you? Almost 30? Jesus.”

Which skateboarder today deserves a pro model handboard?
What’s his name…Og De Souza. He 5-0’d that twenty stair handrail. He’s so fucking cool. I’ll say him. Pro model handboard…maybe I’ll try to contact him. ‘Cause it kind of is like handboarding. I’m sure he would be so good at handboarding.