THE WORLD THE 917 VIDEO BUILT 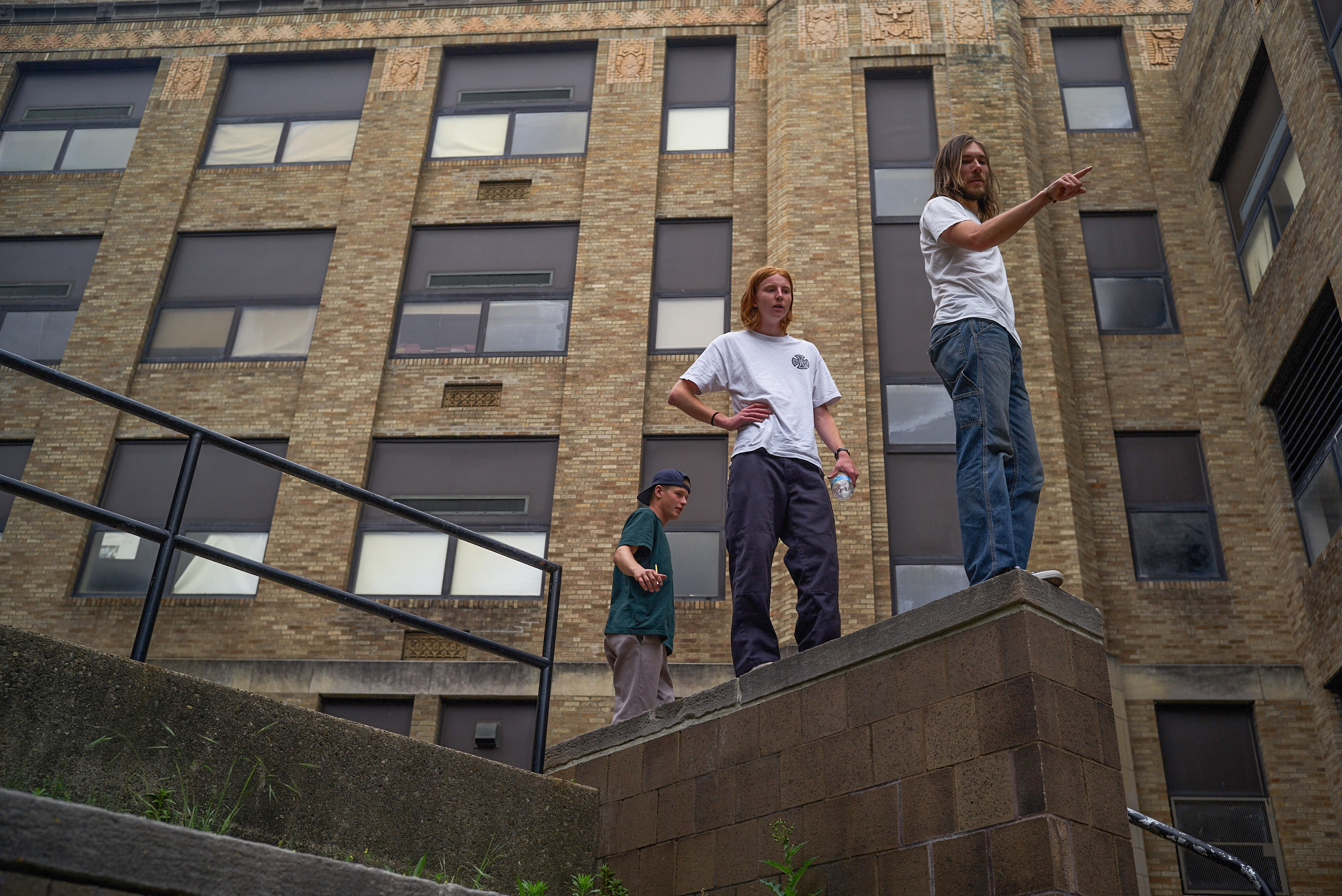 Over the course of 36 minutes, the 917 Video proposes a world. What kind of world? One of affection without sentimentality, a place where misfortune is delight. Everything here is pretty good, it seems. Its predecessors are films by Johnny Wilson and Bill Strobeck, but Logan Lara’s voice is dreamier, sun-soaked and optimistic. There is minor blood and tame vomit, but Logan appears to lack the impulse to exploit homelessness or make a puppet show of mental illness. This is the sort of modest dream that qualifies as fantasy in the year 2017. Forget slow motion, second angles, and drones. Just keep your loved ones close and out of harm’s way. As a matter of fact, the 917 Video‘s most spectacular trick is to collapse the distance between New York and Los Angeles. Lara has drawn two Xs on opposite sides of a piece of a paper and folded the paper so that the Xs touch. And here they all are, happy and supportive, wherever exactly this place is and whoever exactly these fellas are.

Does the object yield further pleasures than its surface would indicate? Does it reveal itself to be something beyond that which it obviously is? Well, it’s a skate video. Let’s not get carried away. Will the 917 Video endure? Perhaps not, but today isn’t about endurance. Success today only means enduring just slightly longer than the others. Success is leaving an impression just a modicum deeper than the last so that it survives until the next. Or maybe its goal is only to properly insinuate itself into the algorithms behind “Up Next”, or “You Might Also Like”. 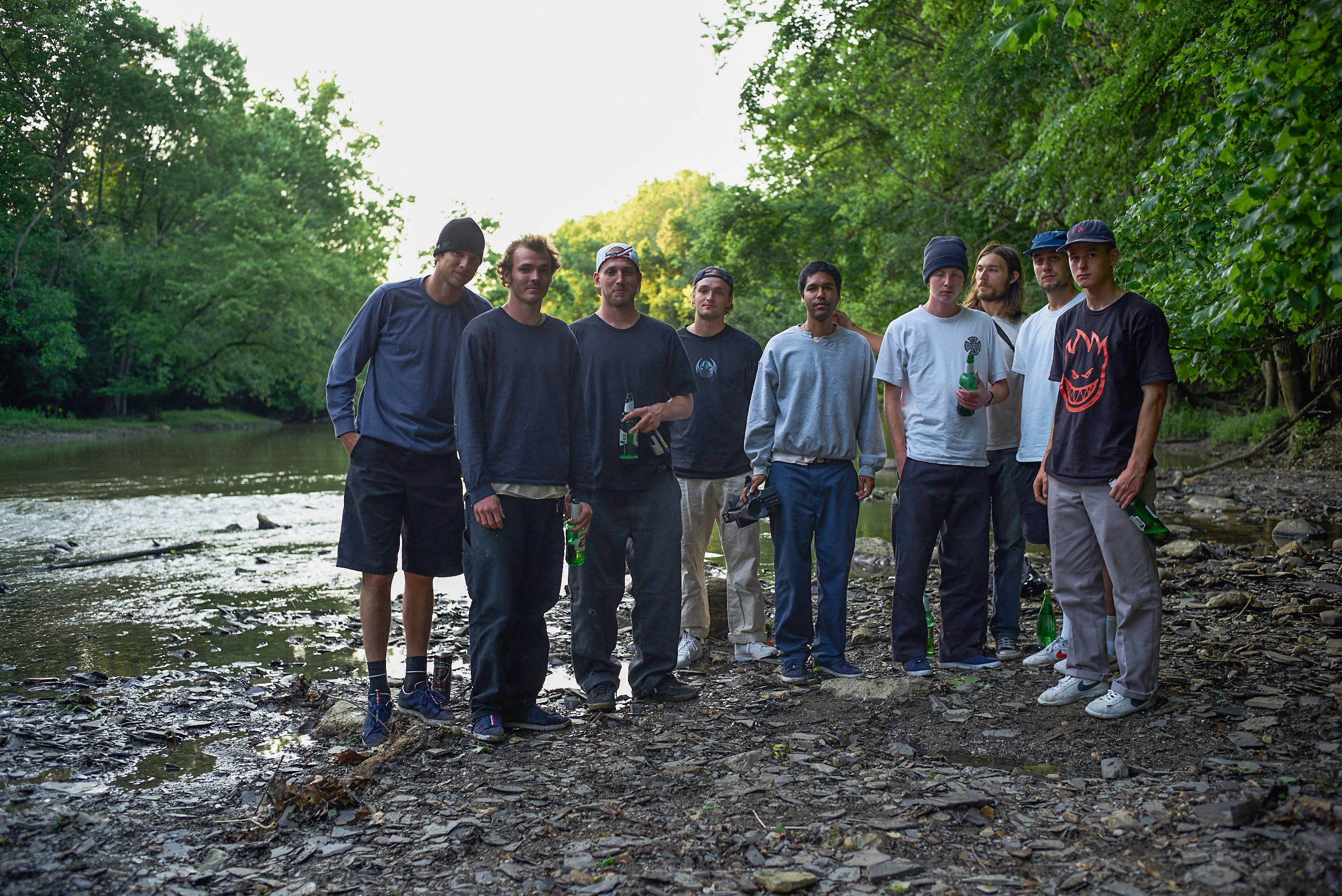 On the morning of September 17, the 917 Video showed up without any pageantry or even credits, free of watermark or cost to the viewer. What was previously anonymous and vague, or at least enigmatic and roguish, flickered into a shape that is halfway familiar and halfway bizarre. When the final voicemail of the opening goes, “Hey, your boards fucking suck, Olson. You have a piece of shit brand,” we’re invited to consider whether we agree.

What relief this film offers after the unsettling DC Promo‘s argument against that old brand’s long descent into the gutter of action sports! What a breeze this is compared to the awkward, fraught experience of rooting for The Flare against all external odds and internal head-scratching.

In form, the 917 Video appears to be comprised of twelve parts, but there’s a fluidity to them that makes one part never feel like only one part. Its voice is a long, winding sentence with clauses that don’t always seem to track, driven by syntax too obscure for standard punctuation. Divisions indeed remain in this world; Lara has not set out to erase the borderlines that define skateboarding. But the 917 video appears to disbelieve that such lines run parallel. The world it proposes lies at that conceptualized distance where eventually these lines meet. Here, judgments like “good” and “bad,” “progressive” and “retrograde” yield to endless sunshine and a mixed crowd of pals. Or apparent pals, anyway. 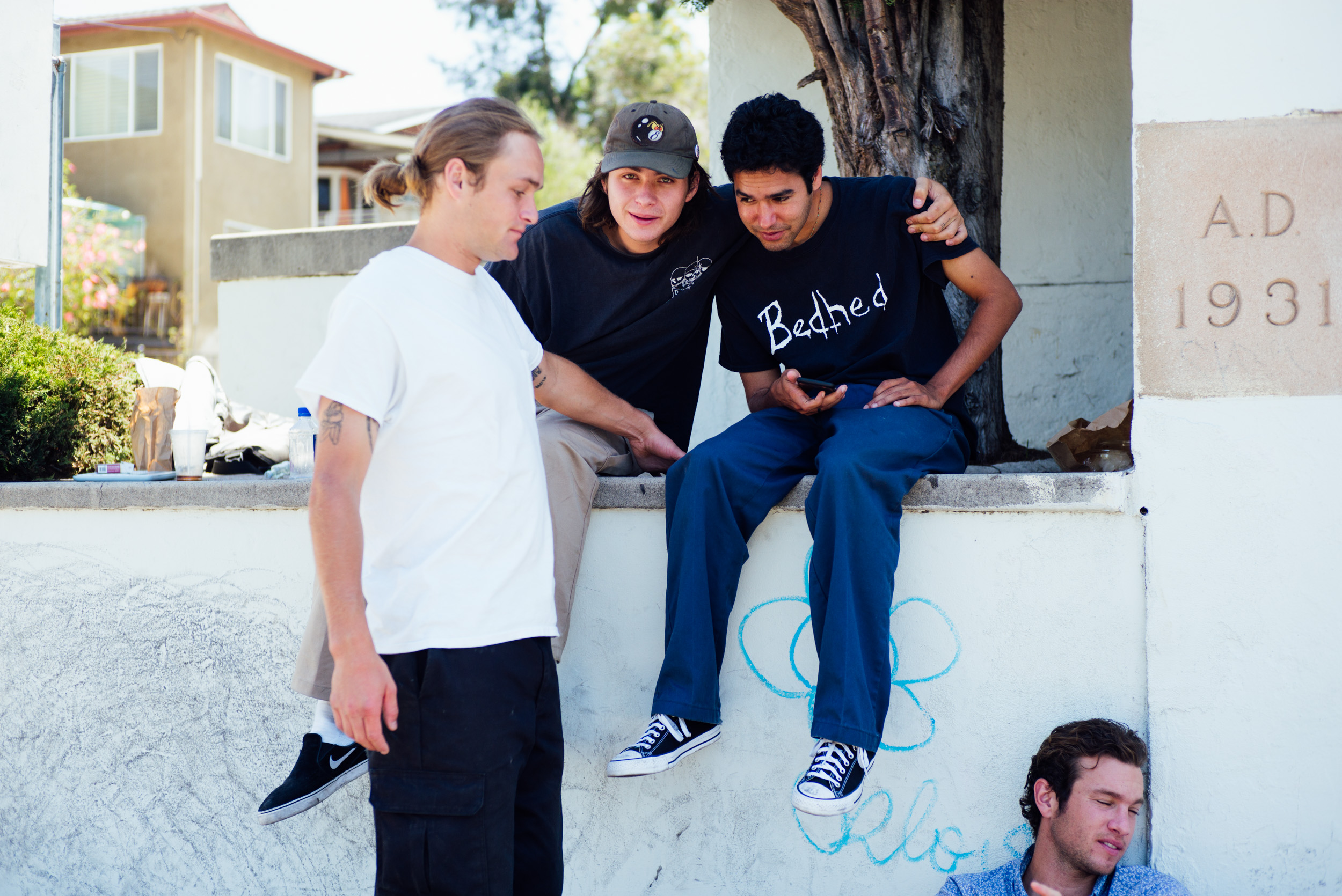 Aidan Mackey is a skinny teenaged boy unbothered by dark, putrid bong water. He does not appear to be what we’d call ‘gifted,’ physically. He looks uneasy on a board but ah, he’s got a clean impossible, which is its own currency these days. Plus who could possibly stay mad at that smile? He’ll behave foolishly in a drive-thru but still say “Thank you” in the voice of a remorseful boy. Genesis Evans and Nico Chiat are likewise young and apparently wholesome kids who may or may not still be skating ten years from now. They are playful dick-tappers, not dick punchers. They’re novices, more or less, the skinny, human equivalents of the brand’s amateurish board graphics.

“They are playful dick-tappers, not dick punchers.”

There’s a stark, sudden escalation in stakes when Aaron Loreth arrives, and not a moment too soon. Nik Stain will come charging towards us, right arm churning. And while he won’t quite deliver on the promise of his Bruns work, here, Hugo Boserup is a suitable partner. With Stu Kirst this second circle of 917 reveals its type; these are the apprentices. Nolan Benfield seems as good as most of the good people around today, and I suppose Cruz Mendez, though by the time I get to him I’m really just pointing toward similar shapes and making sounds. Several of them have shaved heads.

In the third overlapping circle of 917 we encounter the experts whose names we expect to be written on boards. Vincent Touzery is French, you’ve probably heard, and a Bloby. He has a good time. Cyrus Bennet is a brutalist whose right hand has a tendency to tighten into a fist as his eyes glower. He seems, I mean, hungry, starved, as if somewhere along the way someone, a fortuneteller or blind seer whispered into his ear the date and time of his terrible, unavoidable fate. As for Max Palmer, he makes it easy to get carried away. Two years ago he reminded me of Rick Howard. Here he reminds me of Gonz. Which is not to claim that Max Palmer deserves to be spoken of with the breathless admiration we reserve for Gonz, only to suggest that they share a shadow, maybe, or have been robbed of sleep by the same melodies echoing inside of their strange minds. 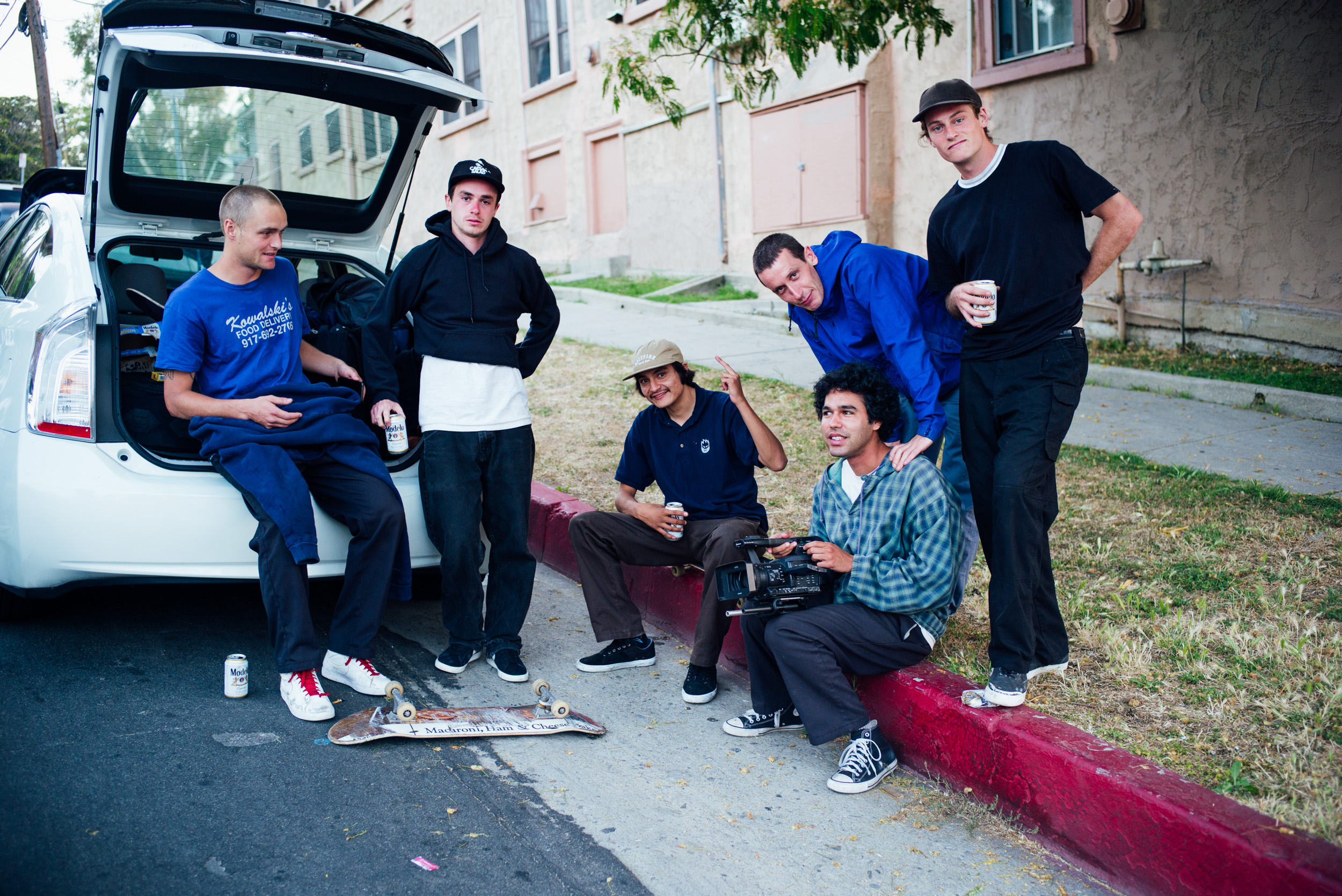 And Alex? He of pigtails and neckerchief, who skated Paris in a tunic and has a taste for analog synths? Of whom we have seen much since his last full part and yet whose backside flip is somehow always surprising? He’s skateboarding’s handsomest prince, who spurned his mentors at Girl and then immediately bailed on Brian Anderson, who latched himself barnacle-like onto the hull of club and gay cultures, who introduced a fashion skateboard brand, Bianca Chandôn, that none of us can afford. Still, I tend to value the type of honesty that works against one’s own better interests. Alex has been honest to a fault, a man as outwardly anxious and uncomfortable as we secretly are, immune to nothing, and especially not regret.

It wasn’t branding acumen, after all, that cratered two years between 917’s inception and their first video. So when Olson claims 917 is the result of a “guilty conscience because I was using skateboarding to help push [Bianca Chandôn] but wasn’t letting skate shops buy it,” I tend to believe him. When he tells us, “Yo, do this for a test. Go to a gay club as a straight man and feel what it feels like to be a girl…You will fucking have a lot more respect for a girl and understand why her fucking wall is ten feet tall when you’re trying to talk to them,” I think, well, alright. This is not exactly social justice, but it’s a start. 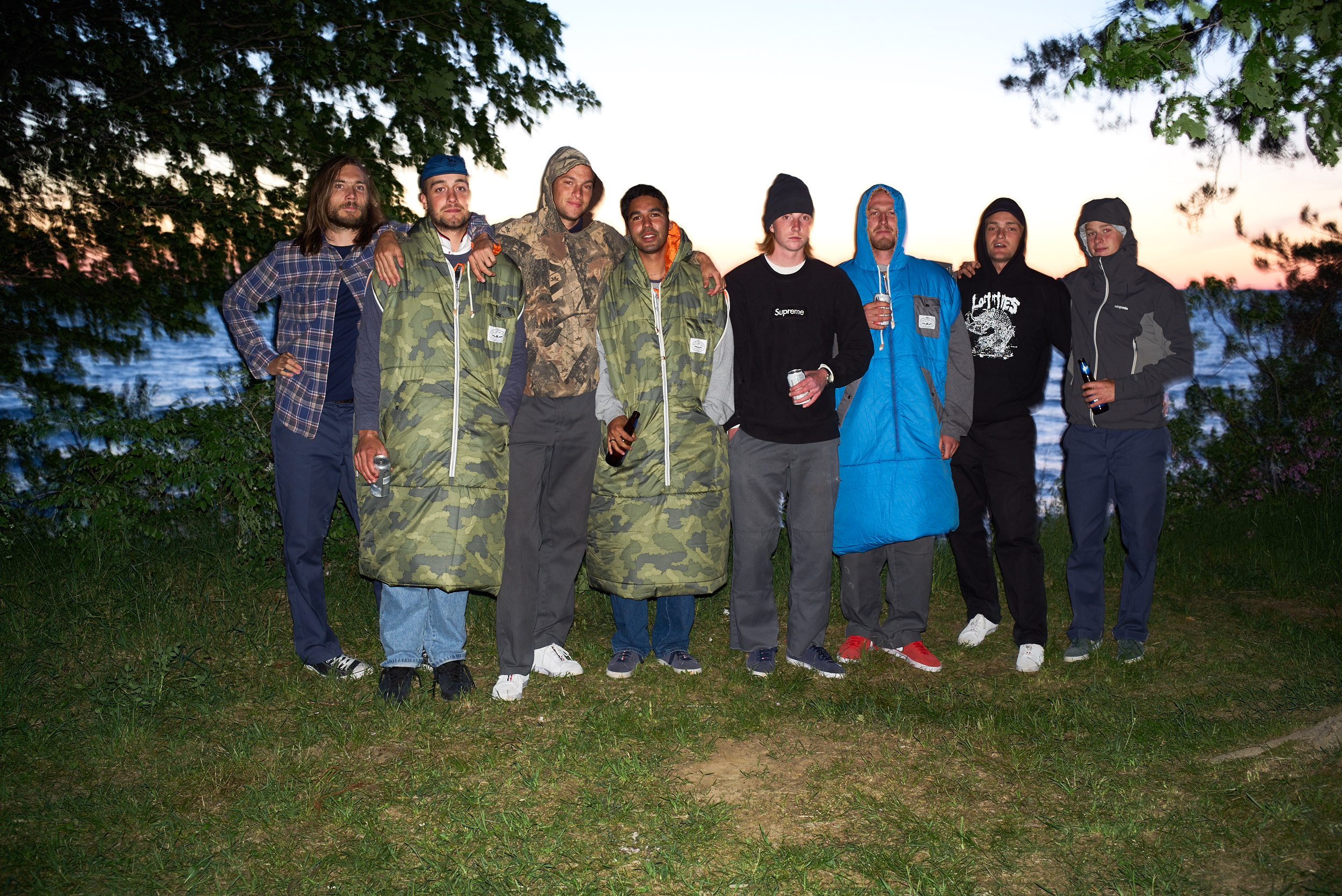 So whatever suspicions I’ve felt watching this video, whatever notes I have jotted about irony and sincerity, about cool new guards and old fading legacies, about 917’s musical supervision and just what in the hell it could possibly mean, it’s clear by now these problems are mine alone. I asked for this, after all. When I saw Vans’ Propeller I recoiled, wishing for something less rigid and partitioned, more transitional and kinetic. Before that, when Nike’s Chronicles Vol. 1 was released, I wrote about the constant, silent shame that all of our cultural objects are always, at their core, promotional devices. That we are people who pay to watch advertisements.

But the technological fantasies of the new century have leveled, cleared, and in fact carpet-bombed the playing field. I paid nothing for this video. Not a single shop in the greater Chicago region—where I live—even sells 917 boards. Is Frog part of this? Humble? Does it matter? The industry is in disarray and the skateboard video, per se, doesn’t exist anymore.

You’re overthinking it, someone is saying. It’s just a skate video. Okay. But we got here somehow, didn’t we? 917 was born from Alex Olson’s guilt, and if the video’s dream feels familiar, that’s because you have at some point in your life stepped foot into an actual brick-and-mortar skateboard shop. What we have here is a 36-minute evocation of our culture’s old, dying temples, places where awkward, shithead teens can chill with international professionals, where old punk soundtracks play in the background and the grotesqueries of the exterior world feel as if they’re light years away. Together, Lara and Olson have achieved a small, apocalyptic miracle: they’ve bottled the dreamy spirit of the skate shop.

My friend, look around. We are standing in a vast, endless desert with no landmarks, or perhaps countless landmarks, too many to serve any purpose. The lines are foggy and our old tools no longer function. But do you know what is real, still? The source material for Olson’s guilty dream. They’re not extinct yet. You can go there in person. It will mean checking their hours or calling ahead, because they tend to close early and open late. Like the 917 Video, it might feel exclusive at first, but there they are, day in, day out, doing their work for us. So make the trip while there is still time. Keep your loved ones close. Step inside and say hello. The skateboard video is dead. Now look at it go.