AN INTERVIEW WITH VASU SOJITRA, THE ONE LEGGED SKATER 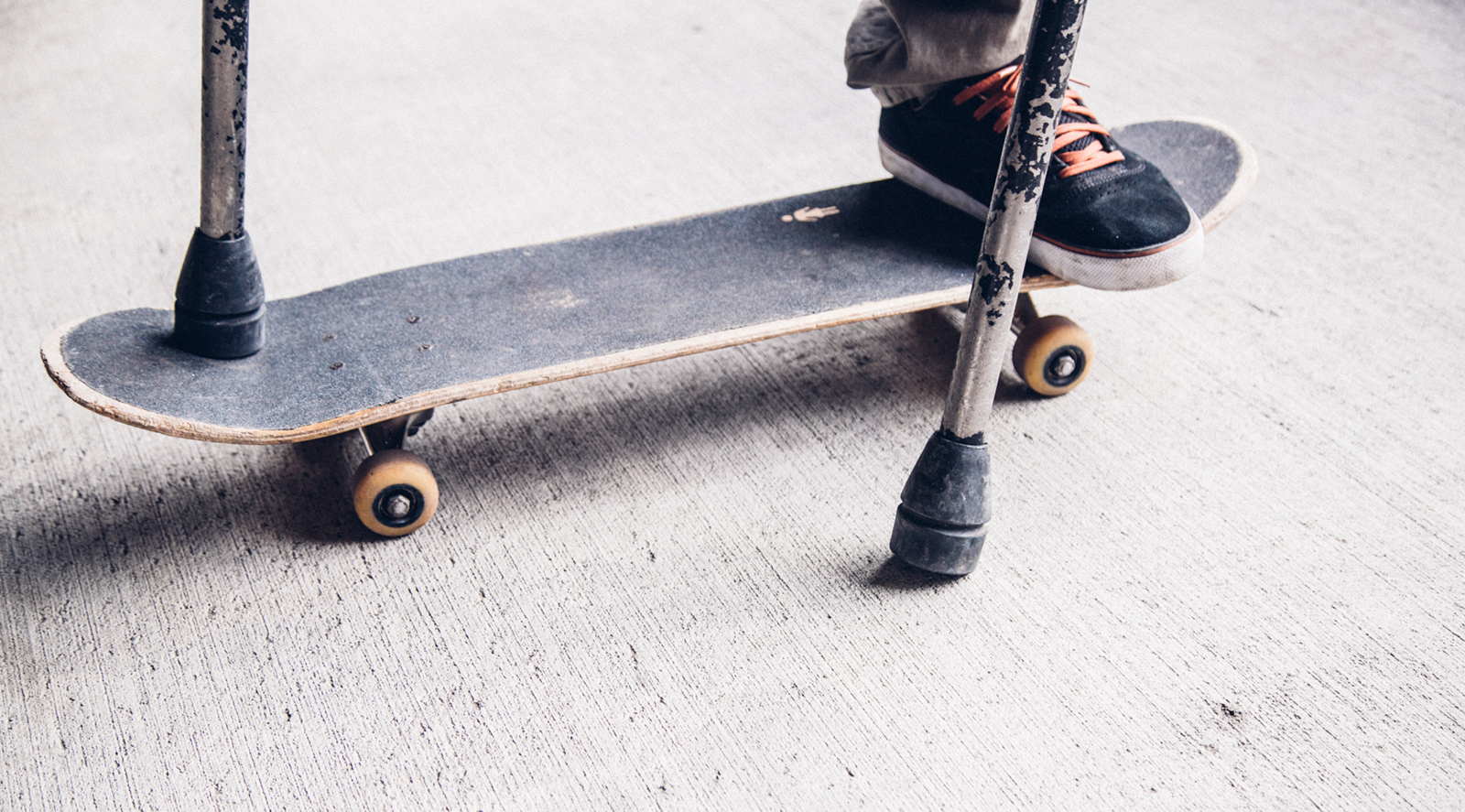 Everyone that has ever stepped on a skateboard knows that it’s hard. It takes weeks or months just to feel comfortable riding it, and it could take years to learn a simple kickflip. Even after that there’s still a chance that you might never learn it at all. That’s the reality of our little toy, so when the internet saw this 15 second Instagram post of Vasu Sojitra busting out really hard flip tricks with one leg and a pair of crutches at a skatepark, it immediately went viral. Within hours the Berrics, Nyjah, and slew of other accounts reposted it, and the tagging frenzy had begun. But although there was a great deal of Instagram coverage, there was pretty much no information coming out about the mysterious man behind the crutches.

We went through the clickhole and found the mystery man’s Instagram and name, Vasu Sojitra. Curious to find out more, we cold called him over the weekend and got some more insight into this ultra-talented and fearless individual that is sure to inspire a generation of skaters to ignore the naysayers and create their own path forward.

Your recent skate clip went viral, how’d that happen?
I originally posted it, but that was like 2 years ago. Then Black and White skateboards reposted it I think? And then I think Karl Watson watched it and grabbed it from there? That’s what I’m thinking at least. Then The Berrics and Nyjah posted it. I’m usually not known for my skateboarding, that’s why it’s funny. I’m more of a skier.

How did you get into skating?
Just friends, basically. And watching TV like the X Games. I was like, that looks cool, maybe I can try that. Then my brother got into it and we tried it. It took a while to figure out skating with crutches but finally I was able to figure it out. It was a pretty steep learning curve, which was sick. 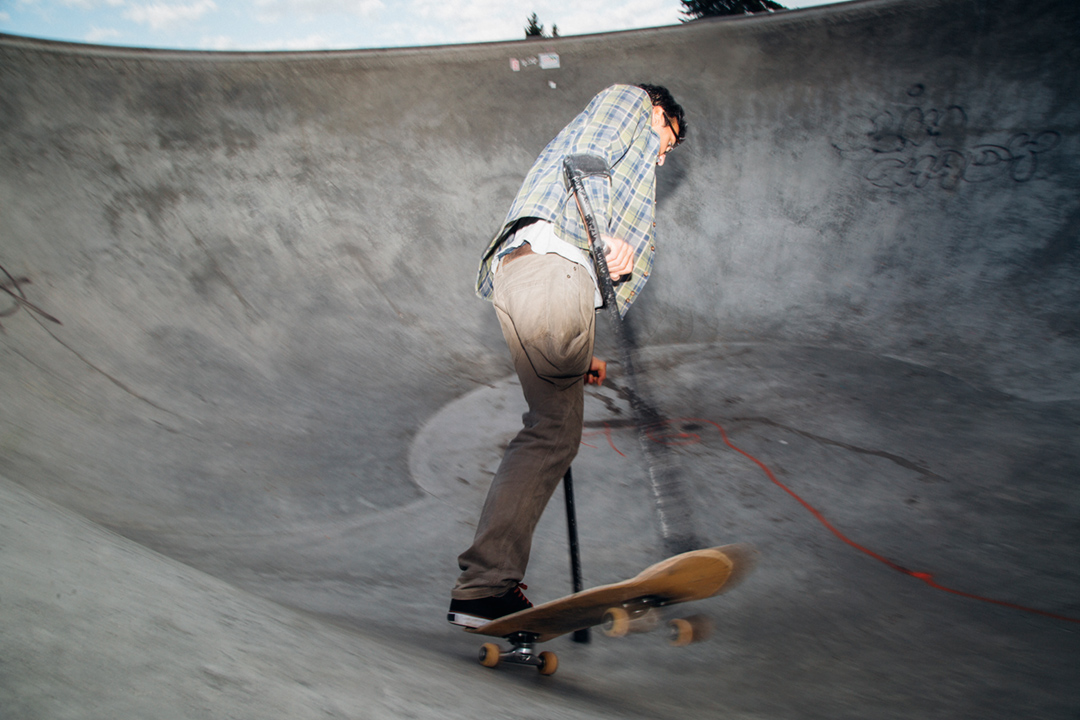 Did you have any favorite skaters or skate videos growing up?
I mean, the thing with me skating, it’s so much different than someone skating with two legs. I kind of have to figure it out on my own cause there’s not really anything out there for people that are skating with crutches. Especially using the crutches to do flip tricks and all that.

But I played the Tony Hawk video games and all that growing up. I think my favorite skater was actually Rodney Mullen just cause he did so many flatground tricks and I was mainly sticking to flatground. So he just inspired me to do a bunch of flip tricks in my driveway back in Connecticut. It kind of just started from there. I’d go out there for a few hours, hurt myself and then come back inside, like most skaters. Me and my friend bought those small shitty plastic ramps and we’d set them up and try to skate those.

I started going to the skatepark a little bit but it was kind of tricky. I’m still trying to figure out the whole dropping in thing. It’s a little trickier with crutches. My elbow doesn’t bend as much as I want it to when I drop in. It’s a little scary, you gotta just over commit basically. And I don’t really put too much weight on my forward crutch when I skate. Most of my turning is from my back foot actually, which is not orthodox to skating I guess, cause most people turn with their front foot. I just have more mobility with the back foot so I use it. 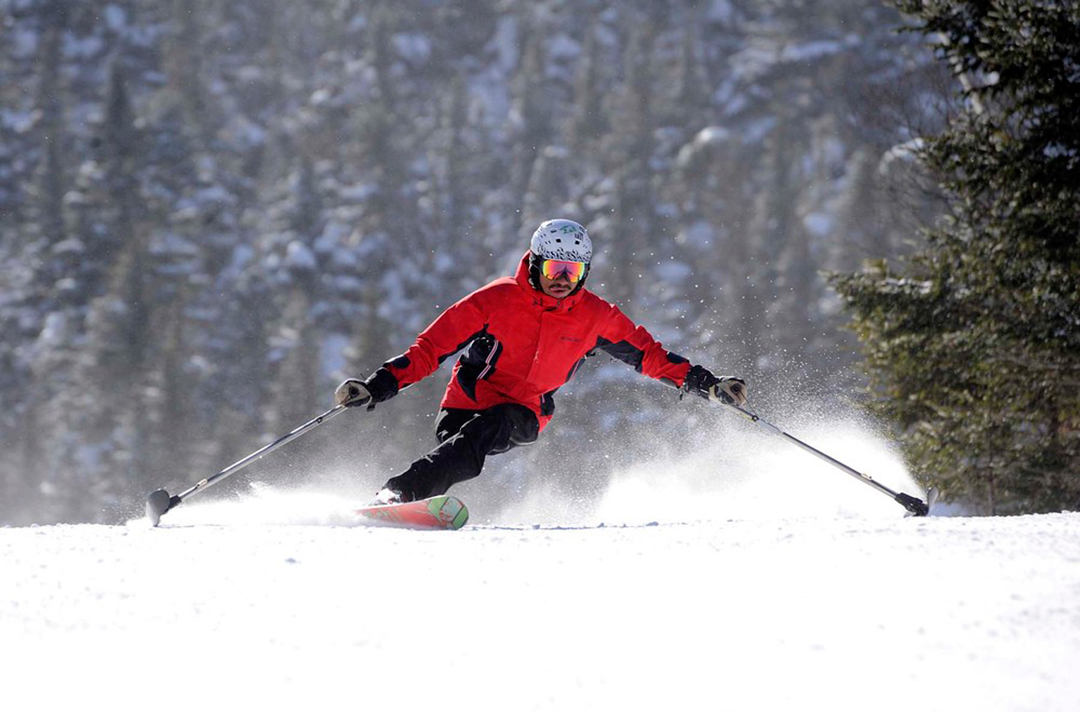 Are you skiing full time as a sponsored athlete?
No, I’m not getting paid for any of the skiing stuff. It’s kind of tricky to get paid for. It’s like in skateboarding, unless you’re really up there in that league, you’re not really getting paid. I’m actually the Adaptive Sports Director at Eagle Mount. We help people with disabilities recreate. I’m in charge of the ski program and in the summers I help with the day camps so we go kayaking, hiking, rafting… all that stuff outside. That’s how I make a living.

I’m kind of blown away that you have a solid media pull and obviously you’re a great skiier – I would have assumed more brands would be behind you at this point, financially.
Yeah, you’d be surprised. I’ve tried to think of new projects to pitch, I want to make a film about skiing, but it’s pretty tricky to get money from the ski industry because it’s so small. We’re still figuring it out.

Are there any skate tricks that you think come easier to you on crutches?
I basically use my front crutch as the toe and heel of a front foot, so flip tricks become easy. The hardest trick is an ollie which is pretty funny. I mean, I can do it, but just on occasion. My front foot is a crutch that’s an inch and a half in diameter so if I ollie, the board basically wants to rotate in whichever way it already has momentum. It’s a little trickier because I wanna learn how to ollie off of things. I mean, I can a little bit, nothing too crazy, but ollieing on to things and off of things… I’m still trying to figure that one out because the board always wants to flip on me instead. 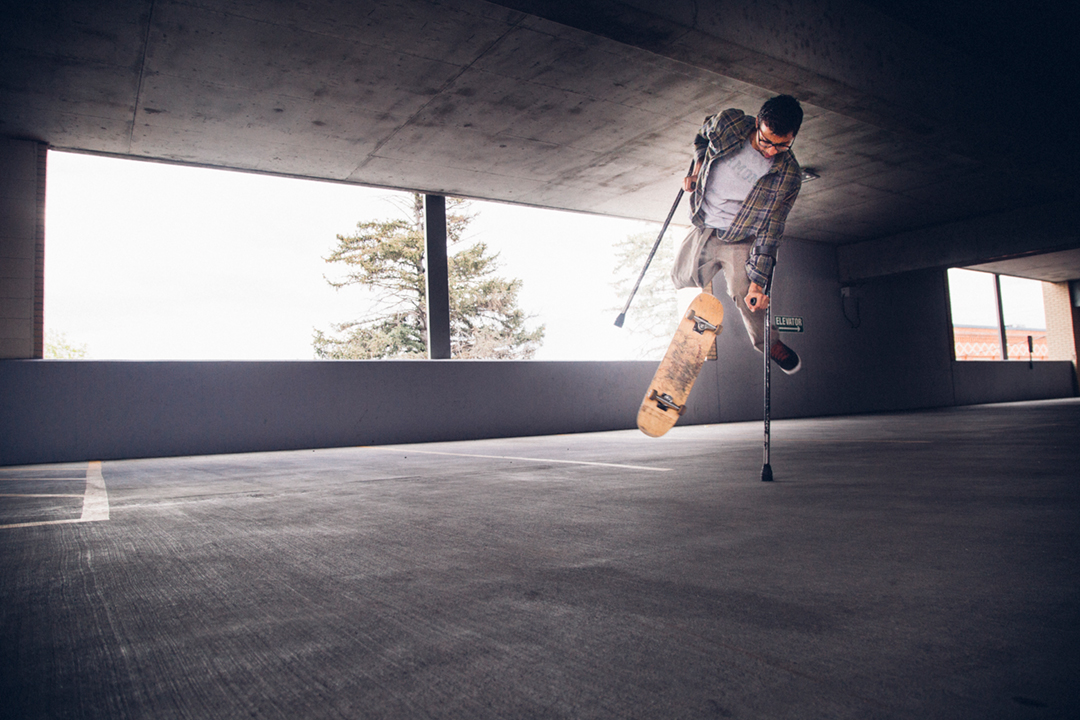 What if you had a crutch that was more shaped like a foot instead of a small peg?
Maybe, I kind of just use the same crutch for everything I do so to add something else might be a little tricky. I do everything with it. I walk with it, I hike with it… I just like it because it’s so simple. I’m a fan of simplicity for the most part.

Do you have to switch crutches out often? I imagine they get funky and start smelling after a while.
Yeah, you’d think so probably. [laughs] I mean they’re made of titanium, the entire crutch itself. I have a little bit of padding near the forearm where the cuff is up top and that thing gets pretty disgusting. I just wash it when I go swimming or something but its got a good funk smell to it right now for sure. [laughs] The hand grips I kind of switch on and off, they kind of break cause there’s so much force on them so those get changed out a couple months here and there.

Are you working on any tricks?
Yeah. If you notice I plant my back crutch on the ground to keep balance during a trick. So I’m trying to figure out if I can do flip tricks with just one crutch instead of both of them, which would be crazy. I’ve tried it but its just sketch because I don’t have any fall back and I’m so used to the other crutch helping me balance just in case I do fall out. Maybe I’ll figure it out. 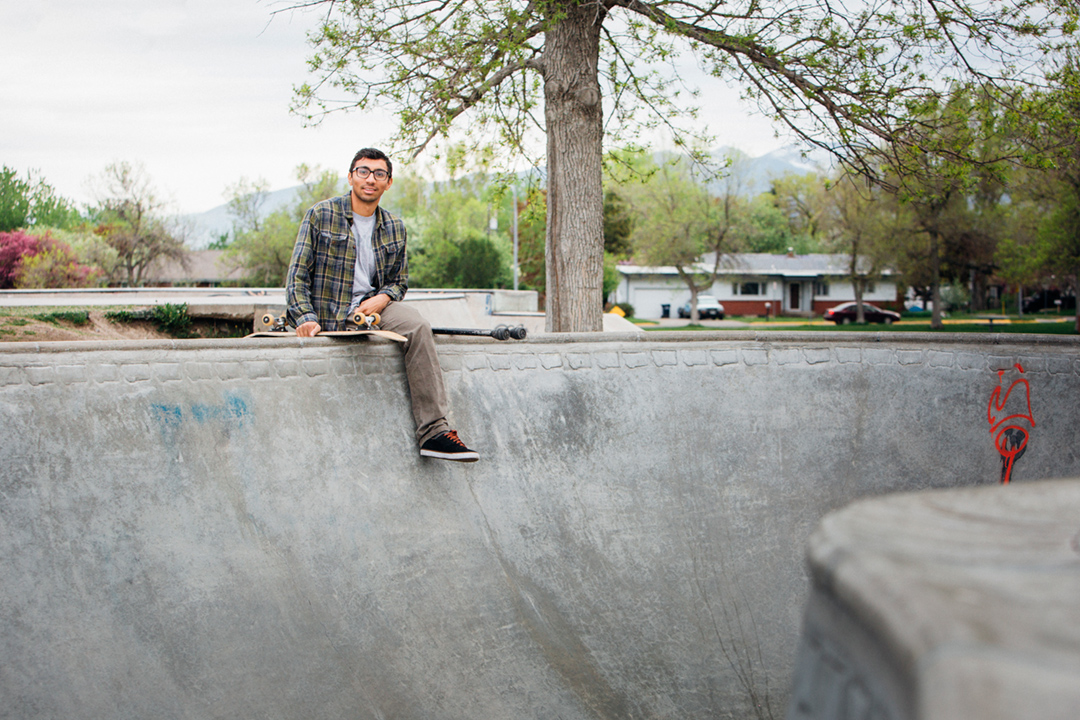 Picking yourself up and down all the time, your upper body must be jacked, no?
That’s what people think. I don’t really drink protein shakes and all that. [laughs] I basically have a lot of endurance muscles sort of like someone who’s a runner or something like that. They’re pretty skinny actually. It’s just that the muscles are so used to being worked over and over again. I’m not lifting anything besides my body weight constantly. It kind of plateaued up for the most part.

Is there any other skate footage of you? Ever try to film a part?
No, I probably should though right? It seems like people really like skating over skiing. I’ve been skating for as long as I’ve been skiing so…

Since your video went viral have you gotten any fan mail from female groupies?
[laughs] Not really, they’re kind of like… shy? I guess that’s different in ski culture. It’s a little tricky. There’s not a lot of girls in my area especially when it’s the summer time, because it’s a college town and they all leave.

Damn, you gotta get out of there, what are you doing?!
[laughs] I don’t know, skiing, enjoying the mountains… have you ever been to Montana?

Sadly no, I’m in New York, it’s so different.
It’s more open, lots of mountains. It’s a good place. It’s kind of a nice hub for every sport that I’m interested in, and there’s a lot of ’em.

If there were skate companies that wanted to sponsor you would you consider doing more skate stuff?
Yeah, skating is super fun. I could try to find someone who’s interested in taking photos for skating, who knows. 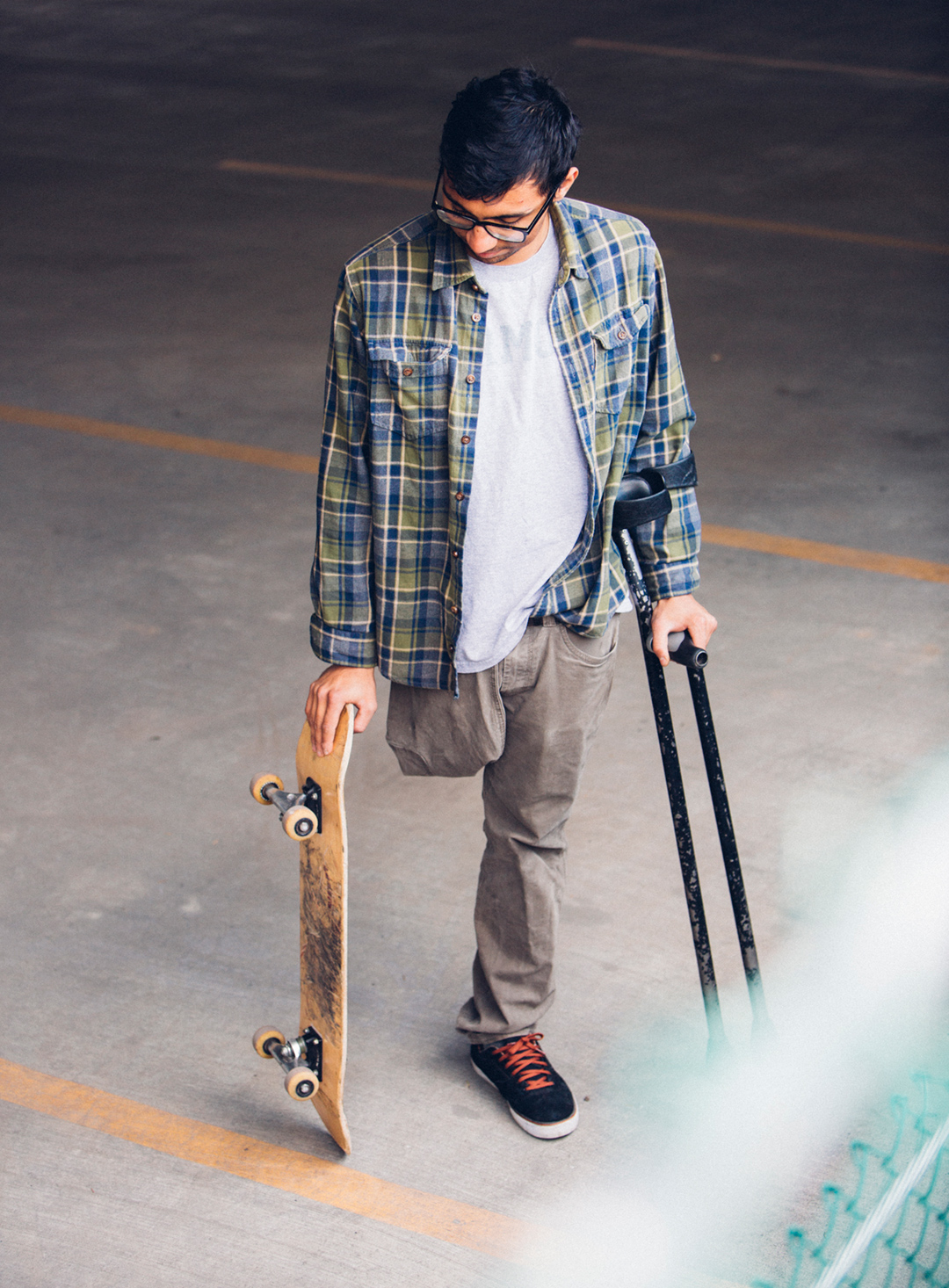 Are there any misconceptions about your disability you get tired of hearing?
I guess people feeling sorry about it. But there’s really no need, I think. I don’t think it’s a big deal, like when people ask, “How’d you lose the leg?” I’ll tell them I lost it from a blood infection when I was 9 months old and they’re like, “Oh I’m sorry.” But there’s no need, I’m so used to it, it’s been 23 years. It doesn’t take too long to get over it. I’m actually completely used to my lifestyle and I enjoy having one leg instead of two. It’s a weird thing to say, not a lot of people can say that about their disability. I know a few that do, it’s good to completely embrace it but it’s definitely a tricky emotional barrier to get over.

It sounds like you are almost proud of it now?
I mean, I guess I’m proud of it, where it’s taken me and how it’s sculpted my life. How I haven’t let it control my life, which a lot of people let it unfortunately do… I’ve noticed that while working in the Adaptive Sports Industry. It’s not bad, but if you want to live a healthy life you should start taking the next step to embracing it. I guess it’s pride but it’s also just realizing what I actually have, instead of what I don’t have. I still think I’m privileged. I live in America with enough food and can go skate or ski and do whatever I want. I have a good job and good friends, what else do I need?

Interview: Ian Michna
Photos courtesy of Seth Langbauer (@seth_langbauer) & Jeb Wallace-Brodeur
Special Thanks: Vasu Sojitra
Share this with your mom on Facebook
Report this as inappropriate on Instagram