MEET SOME OF THE BOYS BEHIND WKND SKATEBOARDS

To me, humor and lightness is always welcomed in skateboarding. While I understand it is a dangerous and dramatic act, at its heart it is fun and silly. Weeeeeee! We don’t always need to try and make skateboarding more profound than it is. Grant Yansura wanted to start a company with his friends where they could all make their silly ideas a reality. All the team riders have input and share a relatively common vision. That vision is that “We need an outlet for our fun and silly video ideas, because there’s no other place for them”. In keeping with Grant’s vision, I interviewed a couple of riders from the team so they could chime in on this idiot goulash. 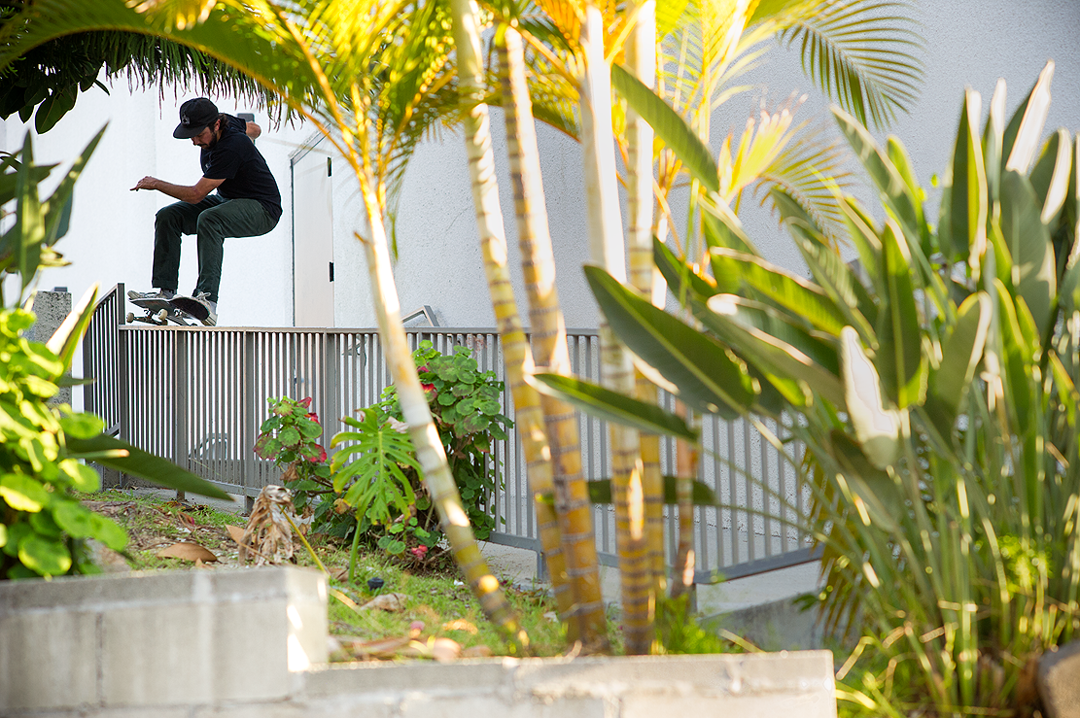 How many times a year do you rack your nuts?
I had a dream last night I sacked this kinker in front of all these cheerleaders. Once you sack it’s all good from there, you know that’s the worst that could of happened.

Freud would probably say some weird shit about that dream. How soon after you started skating did you start filming?
Not totally sure I never was like “OK guys I’m a filmer now,” My parents had a Hi-8 camera so maybe that made me the filmer of the crew. But we all filmed each other, I just happened to suck the least at it. I’m still not good at being a filmer; a lot of times I’ll be skating a spot until someone is really going for something, then I’ll realize that I should probably be filming that. Just a skater stuck in a filmer’s body, bro.

You’ve touched on the fall out with Rip N Dip before, but could you briefly explain what happened?
Not gonna go too deep into all that drama, but basically Rip N Dip was an idea for a clothing company that my friend wanted to do and we all made it come to life as a crew. It was awesome, some of the best times of my life. We all moved out to LA and still did it for awhile but then it started to turn into this streetwear, “weed-and-cats” company. All these changes were made without any of us being down. The site got a makeover and all of our names were off the site, and I think that’s when I realized it wasn’t the same anymore. Sucks how it went down, I still get hit up all the time by people thinking I’m still affiliated.

What made you want to start WKND?
We were driving pretty far out to skate some spot, and I had a van full of dudes talking shit the whole time on all their board sponsors. So we started talking jive on doing our own thing. Since I stopped doing stuff for Rip N Dip awhile back, I haven’t really had something to put my retarded ideas towards. So I figured why not go for it.

“I think everyone is too scared to make fun of the wack side of skateboarding.
I’m a little scared too”

Who conceives the video ideas?
All of us when we’re drunk.

What other examples of “skate comedy” do you think actually succeeded in being funny?
Big Brother. I’ve been watching those VHS’s lately, they’re amazing. Skateboarding used to be way funnier. I think everyone is too scared to make fun of the wack side of skateboarding. I’m a little scared too; I’ve got some people out there that hate me over some sarcastic videos.

What importance do you think small start-up companies hold in today’s skateboarding landscape?
We can fulfill the dream that you too can get sponsored now. Look at all these small companies sponsor no-namers. I get so many sponsor-me tapes. I was once you, Billy. I remember sending my tape off to Sugar Skateboards, ‘cause I sucked and they sucked, so maybe I could suck for them. I’ve read interviews with smaller companies, and they all have good answers for the question you just asked. Makes me think I should come up with a fake good answer for what importance WKND serves, but it’s just an excuse for my friends and I to do something with our ideas we come up with in the van.

Are you excited about Joe Dirt 2?
So hyped. Hopefully they don’t blow it, I mean have you ever seen Sandlot 2?

Oh God, there was a Sandlot 2?
Don’t bother. 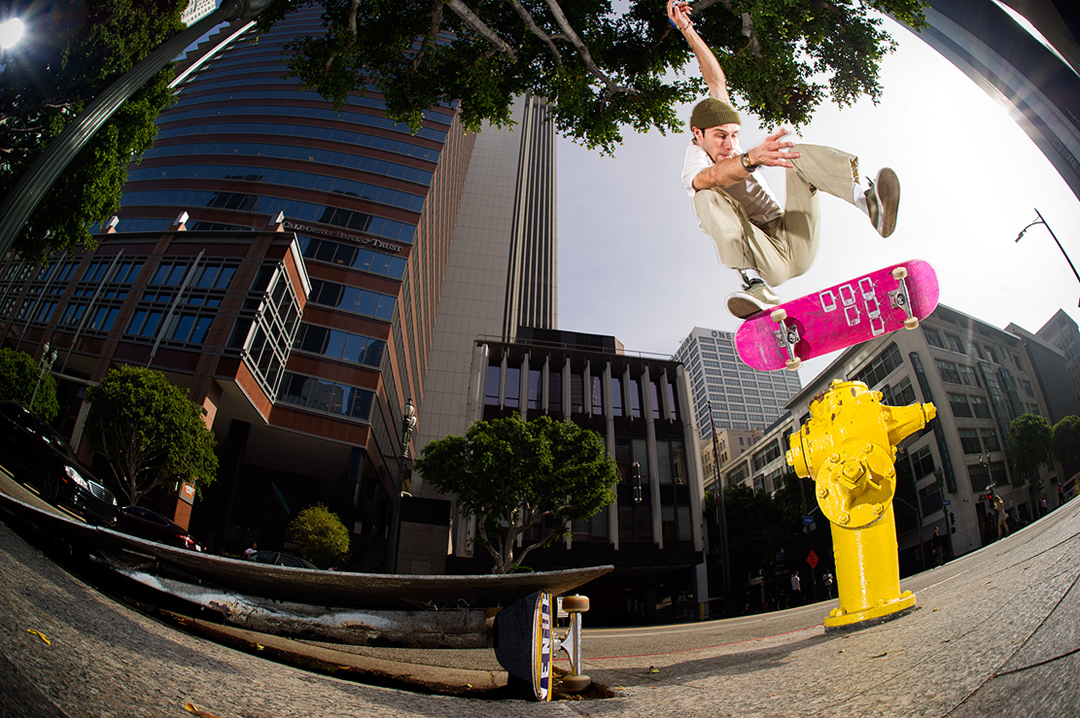 What does your brother (who is a cop) think of skateboarding?
He likes it. He doesn’t fully understand it, but he’s a pretty athletic dude. He can surf, snowboard, and sort of ride around on a skateboard. Funny thing about my brother, he pulled over Nyjah Huston where he patrols more than once. He’s given him tickets, and he took away his fake ID one time.

No shit! Did Nyjah have molly on him on any of these occasions?
He might have. Yeah, he’s got a bunch of drugs, go bust him. Take all of his money.

Do you still get royalties from getting run over by that car?
I don’t, but my other brother hit me up and told me it was on Dyrdek’s show. I haven’t seen it. But I wish they would fuckin’ pay me. I don’t wanna work.

Do you ever dip your dick in the soup at the Ace Hotel where you work?
Not yet. Maybe soon if they’re serving some special wiener soup-of-the-day. 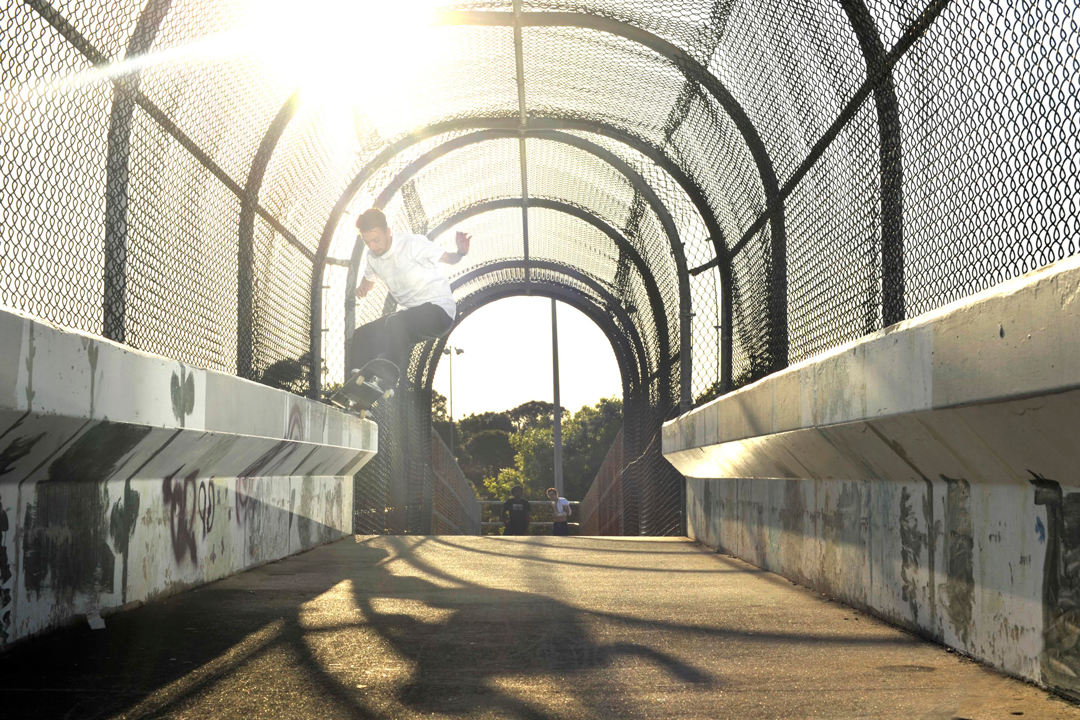 You and I go way back, and I know you used to do a lot of heroin. What made you want to stop?
I wouldn’t say a lot… just as much as I could get my hands on! I don’t have a real thoughtful answer. It’s pretty straightforward, that shit brings you down quick. There aren’t too many options when you’re caught up in that, you know? Get off it or lose to it one way or another.

I think I had a real eye opener back home in Connecticut. Wrong place at the wrong time, I guess. Just in a car with a bunch of dudes and some shit went missing, including a pistol. The next day I’m in an interrogation room mad confused like “uh, I smoked a blunt in this dudes car and now I’m here?” That’s when I realized if I were anyone else, I wouldn’t believe a word I said. Between this kind of shit happening every other day, and running out of electronics to pawn, I decided to give it up. You know you’re only getting a $100 – $150 loan on a MacBook Pro, right?

Sometimes all it takes is for someone to shine a light on it, and you’re like “Yeah, I’m fucking up.”
I had just been tryin’ to get my act together for so many years, you know? I’d dance around it when shit got tough, or there were some consequences in my life, then right back to it when the coast was clear. Trapped on the merry-go-round, son! Skateboarding wasn’t even a thought in my mind at this point. I hadn’t skated in six months or a year, I don’t even know. I finally had enough close calls to make me re-evaluate what I was doing. In the end, I ran back to Florida and checked into rehab for like the 5th time.

“I ran back to Florida and checked into rehab for like the 5th time.”

Did you take any pain meds for your recent knee surgery?
I went under anesthesia, so I’m sure they loaded me up while I was out. Whatever they gave me definitely had something good in it, I hadn’t felt like that in a minute! I told ’em straight up, “I do not want any post-op pain meds.” It’s funny ‘cuz you’d think the surgeon would have some experience with pain pills and drug addicts, but he just could not understand. The dude was wearing cowboy boots in the operating room. He was like, “we’ll just give you…” I had to be like, “listen, I can’t do opiates.” I still don’t think he knew what I meant. Honestly, it wasn’t that bad without em’. I couldn’t really sleep for a few days; I just stayed up watching The Wire. 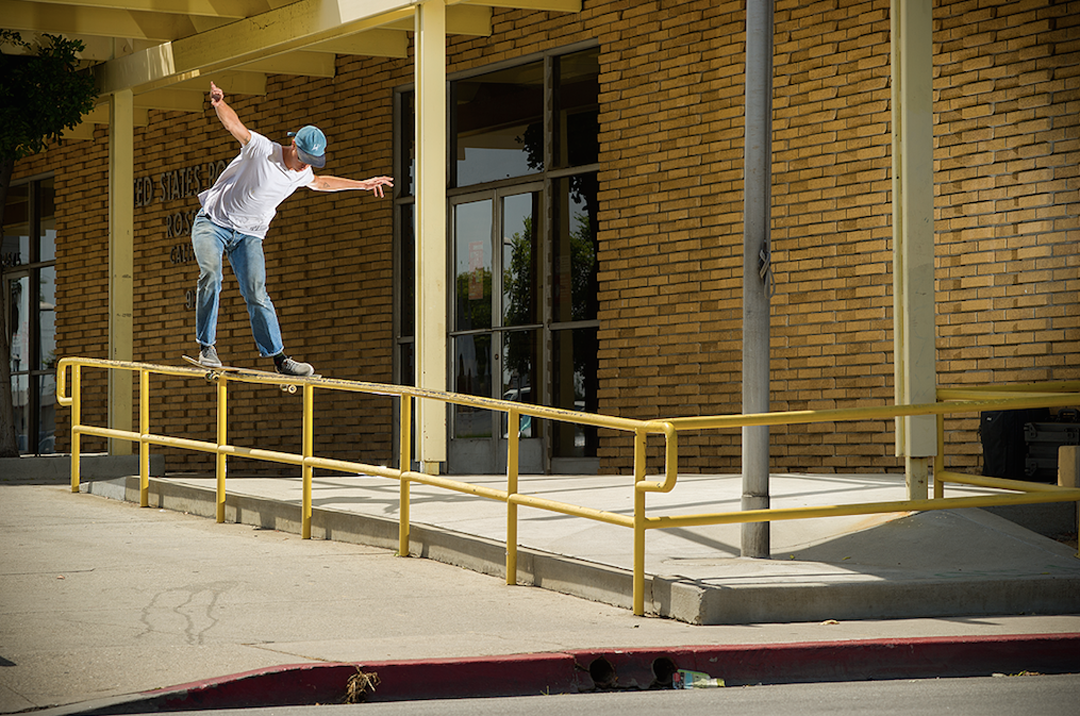 Please describe your daily routine as a man-nanny?
Haha, a manny? The kid goes to home school three times a week, and it’s only for two hours. I pick him up around 11:30, we eat whatever he wants, he’s a vegetarian and I’m the opposite of that so I usually don’t eat. On Wednesday he’s got yoga at 1:30, and then he does a drum lesson right after, so I usually just chill for three hours and do pretty much nothing. At 4:30 he goes to dance on Crenshaw, then I take him home to the Hollywood Hills. He’s trying to learn to skate, so sometimes we go to the skatepark and I teach him.

Is Kenny Anderson a good kisser?
I dunno if he wants me to say. I can’t really remember, we were pretty gone, but I’ll say yeah.

Is Mac Demarco a good kisser?
He tried to slip me tongue onstage. I was blacked out and I jumped onstage twice. First time I snuck up behind him and threw my shirt over his head and he was totally cool with it. So the second time I was like, “I’ve seen pictures of him kissin’ dudes, I’m gonna hop up there and lay one on him.” He hit me with open lip.

What drives you to kiss males?
It’s just funny. I do it for the experience, dude.

Have you begun preparations for an acting career, such as getting headshots done and getting an agent?
A few months ago I was super trying to do it, but Grant has all my footy for my reel. My friend was gonna hook me up with an agent, and he was like, “If you get a reel together, I’ll get you hooked up,” but Grant really started cracking down on editing the WKND promo, so I just let him fly ‘til it’s over. I’m down to act, that shit’s fun.

Have you been to any auditions?
I did a commercial I was barely in a few weeks ago. Also, I was an extra in that movie Project X. I had just moved here from Florida, and my friend was doing it because he knew William Spencer who was doing all the skate stunts. They wanted like a crew of skaters for the high school in the movie. William got fired, he fell on one stunt, and they were like “You’re outta here.” I got to fill in for the DJ too, he was a real DJ and he had to go do a show. They randomly picked me out of 500 people at this fake party, and I got an extra $200 to pretend I was DJing while they shot me from behind.