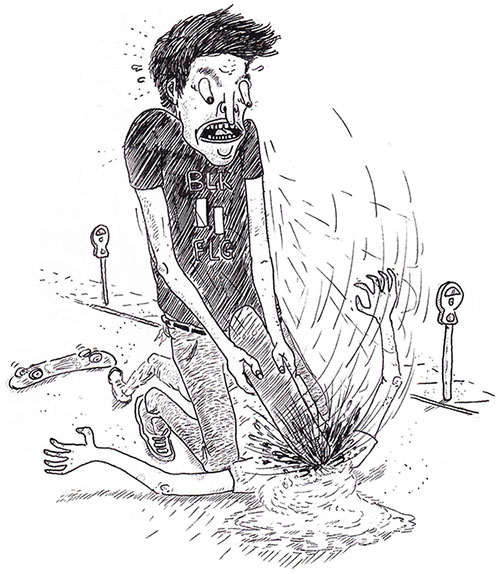 1. Alex Olson vs. Dylan Reider vs. Austyn Gillette – Team Handsome Cage Match
The ultimate 3 way battle between the most sexy and sought-after men in the action sports world. Weapons include but are not limited to: shaver, full waxing kit, cologne, tweezers, comb and much, much more. Anything goes except headshots, because we wouldn’t want to ruin their perfect facial symmetry, now would we?

2. Rodney Mullen vs. Daewon Song
Here at Jenkem, we are ready to end this decade old fued – and no, not with another stupid video. For this competition between skateboarding’s most technical, both will duel it out in a manual battle… except the front trucks will be loaded with touch sensitive explosives. First to lose balance and ride on all 4’s is a goner!

3. Theotis Beasley vs. the SLAP message board
Theotis, the nicest guy in skateboarding will square off against the biggest trash talkers on the interwebs. The moderator will post a giant picture of Theotis on the message board, and let SLAP posters do their worst, while he will have to defend himself against them and reply with nice and sponsor appropriate comments :)

4. Lil Wayne vs. Jereme Rogers
These bi-talented skateboard-rap wonders square off to find out who is real king of the skate/rap world. Starting with a 3 part competition: Freestyle battle, game of S.K.A.T.E. and then finally a brutal fight to the death. May the most delusional man win!

5. Ryan Sheckler vs. Female Tween fans
Teenage heartthrob, reality TV star and sexual icon Ryan Sheckler will have to deal with his pre-adolescent fans once and for all. Locked in a Zumiez with no security and no way out, thousands of 10 – 14 year old girls will be ravaging him from all angles. How will Ryan defend himself against hundreds of hands slathering themselves over his 6 pack abs?