THE 7 VICES OF DOOM 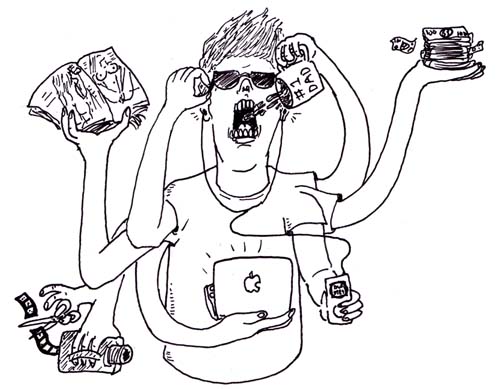 1. Money
People screw over their best friends, will kill animals, stab people, fucking harpoon whales, sell crappy cars, rob people and fire mad coworkers just get a little more cash. People will ruin their best friend over it. Mother fuckers will go as far as killing their own water, air and health to make extra. Shit, google Monsanto or Roundup Ready Seeds. They make seeds for corn as well as soybeans and cotton. You heard me you hippy fucks! The old oi bean is in danger with this seed that can only hatch if it is sprayed with the toxic chemical Roundup, a brother in law to agent orange – aka the shit we sprayed all over Nam to kill trees so GI’s could see the jungle landscape better. So fucked.

2. The Internet
We as humans all are full of shit if we say we are not addicted to the internet. Yes, being on the web causes obesity, bad health and constipation. I grew up with no computer in the house. I spent my days skating and being outside. Even in the rain I would go find a parking ramp and shred. I hated being inside. Now I find myself feigning for my web fix like a junkie looking for heroin. So much info, so much crazy shit out there. The only sad thing is I never learned how to spell or do anything that is needed to have a desk job because I thought would be dead by 25. Here I am at 31, still a retard and still fucked and now addicted to the world wide drug.

3. Music
Shit, I’ve spent so much cash on CD’s, iTunes, fucking vinyl, tapes, mix tapes, MP3’s, over the years it is sad. I get mad pissed if I do not hear music, good music, for a day. I get all pissed like a drunk going though a withdraw. I love jazz, hip hop, punk rock, the sounds of blood let and clot, fucking metal, black metal, hard core, broken door, handy with shovels, blitz and a bunch of other shitz. Gray and Old Skull, Slug, Sage, Eyedea, Hiero, Living Legends, Anticon, you all are my dealers. Damn it. I am addicted.

4. Sex
Fuck I love it. You love it too. I go crazy at times and my chick must want to kill me when I am feigning at 3 am. I will wake her ass up even if she is blowing her nose and looks like she just got hit by a crying bug. I still need to drop in and handle biz. Hell a few days of no sex leads to beating the mule. How the fuck is that good for you? Scabs on the shaft is almost as bad as the injuries you get from sex. My chick does not mean harm and neither do I but that drug is so hardcore you will forget you are hurting yourself. I have had pulled leg muscles, torn ribs, bruised ribs, had a beat up neck, torn ligaments, fucking tweaked ankles, I cannot prove it but I am sure some fractures too. Shit, sex is a drug. Fuck anybody who wants to argue any other way.

5. Fame
Fuck it, I will admit it, fame is more than a 15 minute addiction. Anytime you get a free drink or praise for doing something dumb, whether it be a stunt like lighting your hair on fire or pissing off an overpass onto a freeway of convertibles, you seek fame. We would not paint a burner with a phat cap and Krylon or fucking break dance, or snowboard or any of that shit if recognition was not attainable from it. Most of us I mean. Shit, it can be a release, and trust me I know. Sure I would still skate and you would still do whatever you do without any other human on earth liking it. For real though, fame can be addictive, it can fuck up brains, swell up ego’s and make people think they are gods. Fuck fame.

6. Caffeine
I hate to say it but those nut job Mormons who think some dude from the east coast is a prophet might be right on this one. I mean Starfucks on every corner, soda pop in hand, hell, if I do not get my chocolate fix I freak out. I know heads who will kill for a shot of joe to the dome. This shit is lethal. Makes you jittery, jumpy and more tweaked than a small dog around a man. Eyes bugging, shaking, biting and being more fucked up than a short bus with road scholars on route to a poetry slam/BBQ cook off at a WalMart full of books and not guns. Figure that one out.

7. Video Editing, Producing, Making, etc.
God damn I have been hooked to this shit since I was 11. I still suck at it. I mean I suck hard at it. I love it though. I guess you could say backaches, pissed off about deadlines and huge electric bills are just some of the problems. It is almost as bad as TV. We stopped worshipping a god or a temple and now people just worship the TV set and anybody who is on it. Why do you think stars exist? Did any of them discover any cure for anything? Do anything good for man? No, they only keep us distracted from how hard life is and how sad it is that we all die. Just like any other good drug, you know what I mean? So go turn this shit off, go camp, go out, travel, see things and never surrender to any vice.